Texas rigs, jerkbaits and Carolina rigs did the heavy lifting at Harris 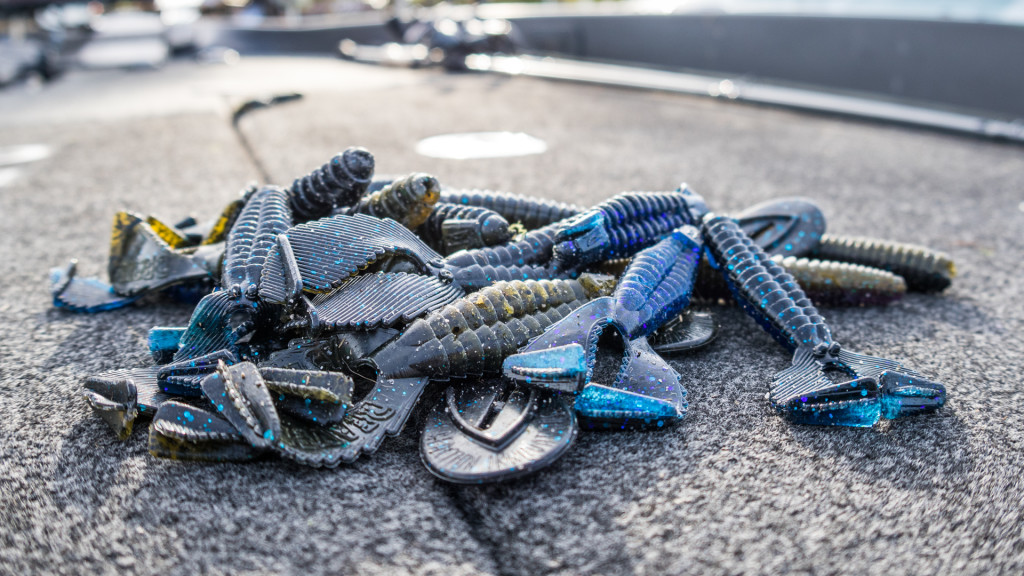 At Florida’s Harris Chain, in late winter, it’s a good bet the same handful of baits are going to produce more than any others, from Lake Harris down to Apopka. During the Tackle Warehouse Pro Circuit event on the Harris Chain, presented by Bad Boy Mowers, it was Texas rigs with black and blue plastics, jerkbaits, Carolina rigs and a few other moving baits that most often got the call.

Here’s a full rundown of what each pro in the top 10 used to catch fish on a finnicky, fickle Harris Chain. 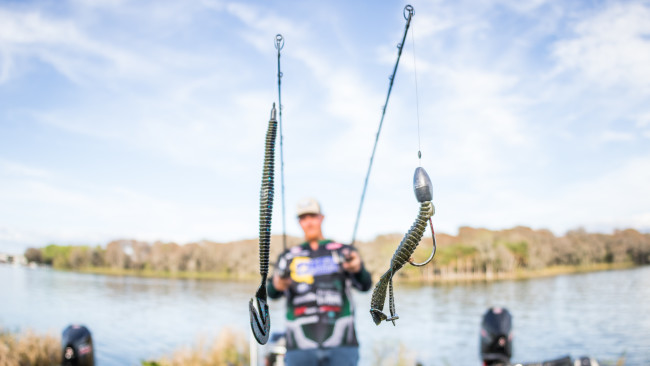 1. Strickland employed just two baits to notch the win: a Reaction Innovations Spicy Beaver and a Reaction Innovations Machete Worm. He rigged the Spicy Beaver with either a 1- or 2-ounce weight on 70-pound-test Fitzgerald Vursa braid, spooled on a Shimano reel attached to a 7-foot, 6-inch, heavy Fitzgerald Flippin’ hydrilla rod. For the worm, he used a 7-foot, 6-inch, medium-heavy Fitzgerald and 17-pound-test Fitzgerald Vursa fluorocarbon with a pegged 1/16-ounce weight. 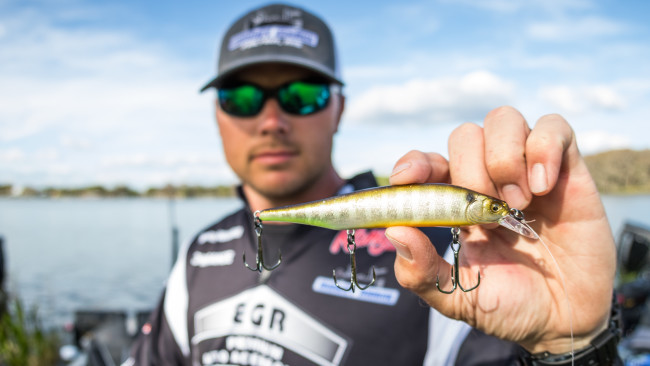 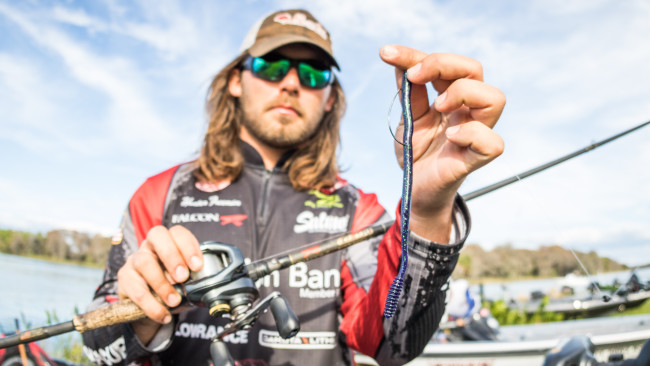 3. Hunter Freeman relied on a Carolina rig tipped with a Zee Bait Co. Rib Tail Worm in junebug to weigh in 54-6 over three days. He used a 2-foot leader with a 1-ounce Swagger Tungsten weight on a Falcon Expert rod. He also caught a few fish on a sexy shad Salmo square-bill crankbait and a discontinued XCalibur One Knocker lipless crankbait (the BOOYAH One Knocker is a similar bait), but most of Freeman’s damage was done with the Carolina rig. 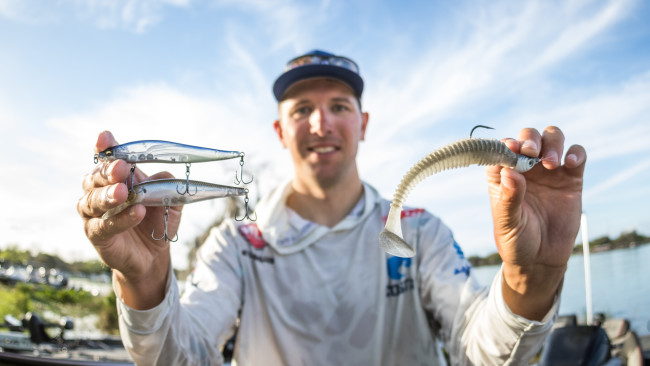 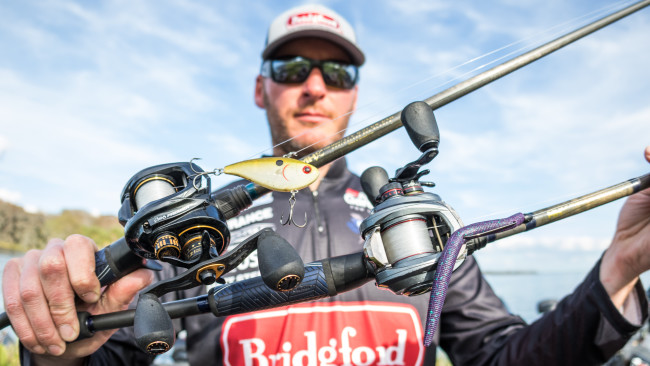 5. Matt Stefan relied on an unpegged Texas rig with a 1/4-ounce weight and a Berkley PowerBait MaxScent The General in junebug. He threw that on an MHX 874 rod with an Abu Garcia Revo AL-F (8.0:1) spooled with 15-pound-test Berkley Trilene 100 Percent Fluorocarbon. Stefan also caught some key fish on a discontinued XCalibur XR50 lipless crankbait (ghost). 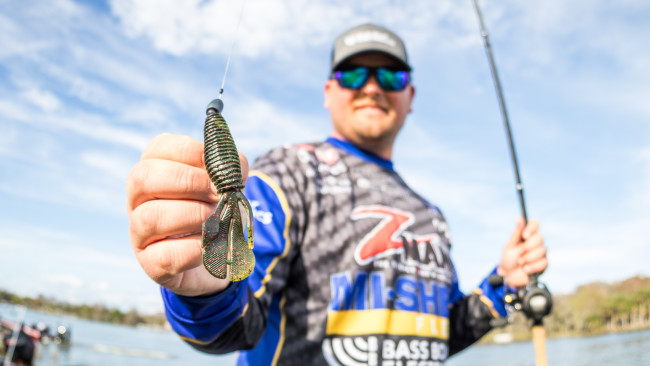 6. Miles Burghoff primarily employed the Z-Man Palmetto BugZ in a couple colors (bama bug and California craw) with either a 1/2- or 3/4-ounce weight and a Hayabusa 959WRM hook. He threw that on a 7-foot, 6-inch, heavy Fitzgerald All Purpose rod and a Fitzgerald Stunner reel spooled with 65-pound-test Seaguar Smackdown braid. He also caught his day-one kicker – a 7-11 giant – sight-fishing a bed with a Z-Man Boar HogZ. 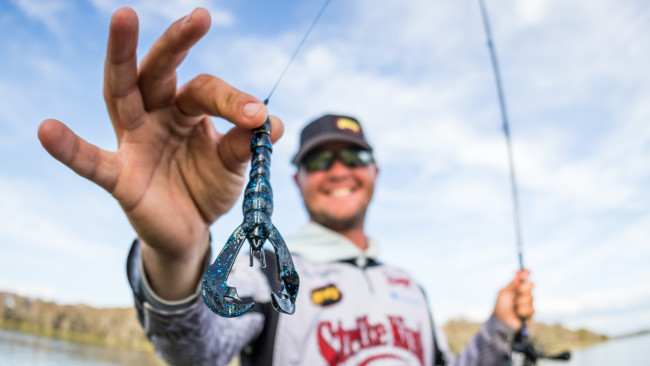 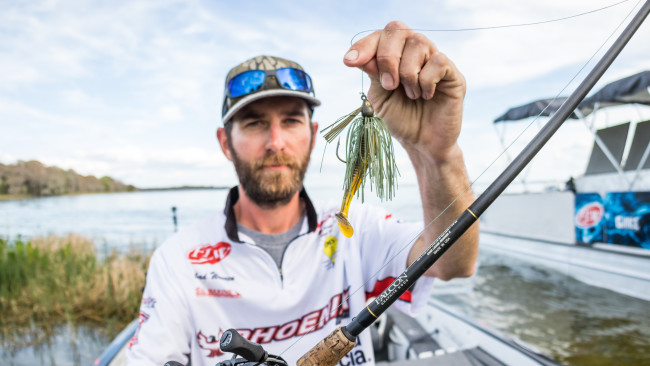 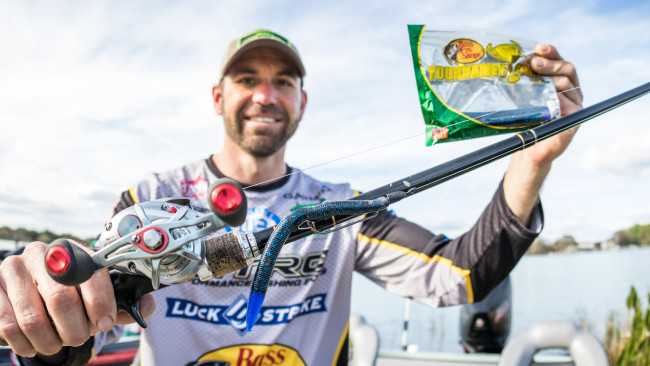 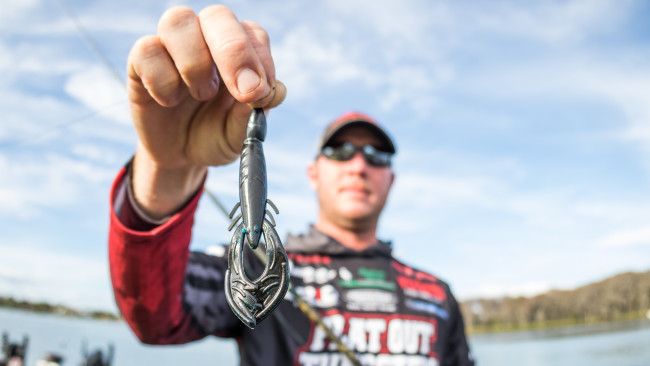 10. Brandon McMillan alternated between a few different weight sizes on his Texas rig (1/2-, 3/4- and 1-ounce Flat Out Tungsten) with a 4/0 Mustad hook threaded with several different colors of Bruiser Baits MacDaddy Craws. He flipped with a 7-foot, 5-inch G. Loomis GLX rod with a Shimano Metanium (8.5:1) reel and 60-pound-test Gamma Torque braid.