It's the final day of the Tackle Warehouse Pro Circuit event in Alexander City, Ala. 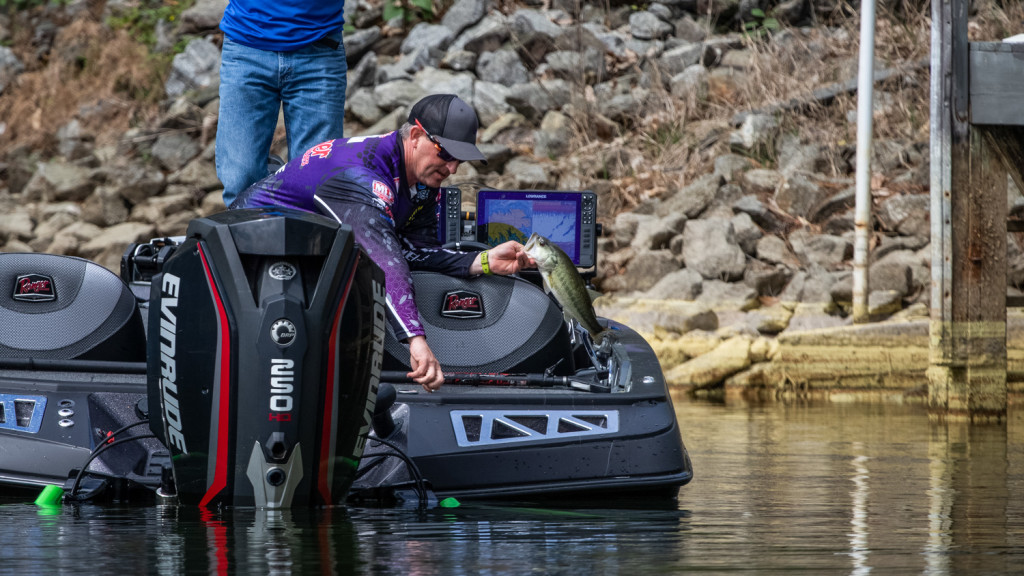 With 90 minutes left to fish, we're shutting down the Lake Martin blog. Thank you so much for following along, and for cutting us some slack on the lack of updates. We're running a skeleton crew this week due to COVID-19 situation.

At this point, it's officially too close to call. We estimate that Abram has the lead, but Nelson and Shuffield are barely a pound behind. One big bite, one key fish, one perfect cast could mean the difference in winning … or not.

FLW Live will continue to broadcast until 2 p.m. CT. Then the final weigh-in begins at 3 p.m. CT. Please join us as we crown a champion.

Spencer Shuffield was able to cull out that 1.82-pound fish with a 2.29. That improved his weight by a half pound, now 1 pound back of Abram. Shuffield doesn't have a fish smaller than 2 pounds in his limit.

Greg Bohannan has drastically changed his approach. He's throwing a buzzbait around docks on the main lake, where he figures some fish have backed out due to falling water.

"The only way I know to catch a big one is with a buzzbait or flipping docks," he says. "I'm going to stick with the buzzbait a little while with the cloud cover coming in. It only takes one bite. One bite."

Spencer Shuffield caught a 2 3/4-pound fish to cull up to around 13 pounds for the day. He needs a couple more like that and he'll be right there with Abram. "I've got to get rid of a 1.82. I've got two hours," he says.

It's been a little quiet since our last update. You should definitely go watch FLW Live right now. Spencer Shuffield is breaking down his forward-looking sonar strategy. He says the water has stabilized today, and that's changed his bite a little. He's targeting spotted bass in drains. The fish are prespawn and postspawn, ganged up and suspended over 18 to 35 feet of water.

Ron Nelson just made a move. He made a long cast with a Keitech Swing Impact FAT swimbait to a little "roll-off," or drop-off, out off the bank with a piece of brush and hooked a 3-pounder. Nelson is now in second place and just a pound and change off Abram's lead. He's going to make this very, very interesting this afternoon. Tune in to FLW Live to see Nelson and company in action on Lake Martin.

"I'm coming into the best part of the day for this bite."

That's what Spencer Shuffield said right after catching his last keeper, which bumped him up to 11 pounds, 12 ounces and into second place. He trails Abram by only 2 1/2 pounds.

Abram better watch out, because Shuffield seems to be getting stronger. The offshore bite in general is strong. Greg Bohannan increased his weights every day mostly by fishing offshore. 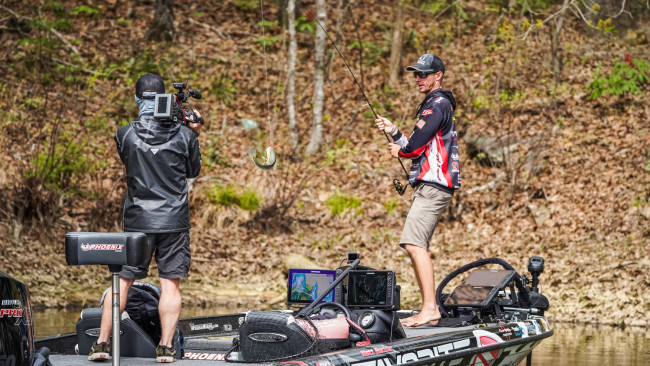 Matt Becker got on a quick flurry thanks to a little school of fish tucked up in a pocket. He caught one that helped him, then a short and then busted off a 2-plus because he "got too excited and set the hook too hard." He says there's a 3-pounder cruising this area too.

Ron Nelson caught a small keeper from a bed. "I don't want to keep it, but I'll take it along for a while," he says. Nelson knows he needs to cull those runts to have a chance at winning.

Meanwhile, Greg Bohannan culled up to 11 pounds. He says the lower end of the lake where he's fishing has the biggest spots, and that's typical of a reservoir like this. He's going to run through his best stuff another time or two, hopefully get another fish to upgrade, and then switch to his largemouth water. 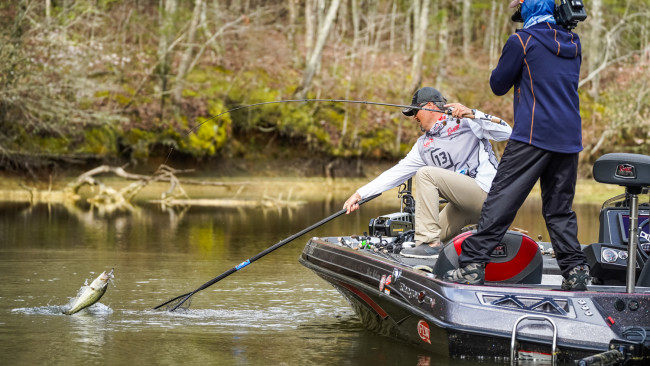 The top five pros are all within 5 pounds of each other with four hours left to fish. Still, no one has managed to catch a fish weighing more than 3 pounds. If someone can get a 4 or 5, that could be a real difference-maker.

Nine of the top 10 pros have a limit. The one exception is Ron Nelson, who's still in fourth place and 4 pounds, 4 ounces off Abram's lead. A big one for Nelson could have the AOY leader in prime position for a shot at his first Pro Circuit win. He's working one on a bed right now with a Strike King Dream Shot.

"They don't really want a big bait. I'm seeing them chase lots of minnows around the beds," he says.

Nelson was considering abandoning this pattern and running his spotted bass locations, but now that he's seen some females on the bed he's reconsidering.

Spencer Shuffield has landed his two best fish in the last 15 minutes. His latest was a 3-pounder. He's still in third but closing the gap. 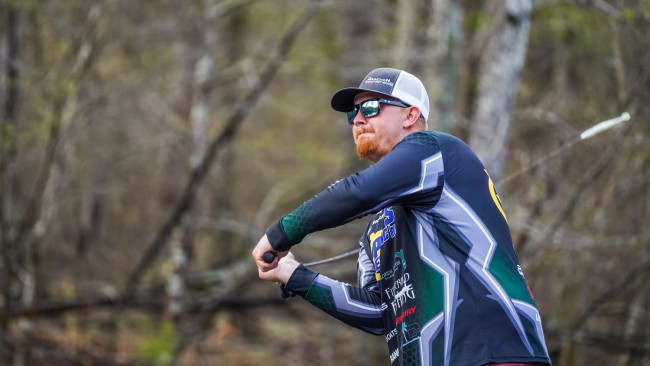 Laramy Strickland appears poised to make a big move today. The Florida pro has 12 pounds in the livewell. His sight-fishing program is on point today. He's now in second place.

However, Jason Abram is working hard to distance himself. With 10 pounds so far today, Abram still leads Strickland by almost 3 pounds for the tournament. 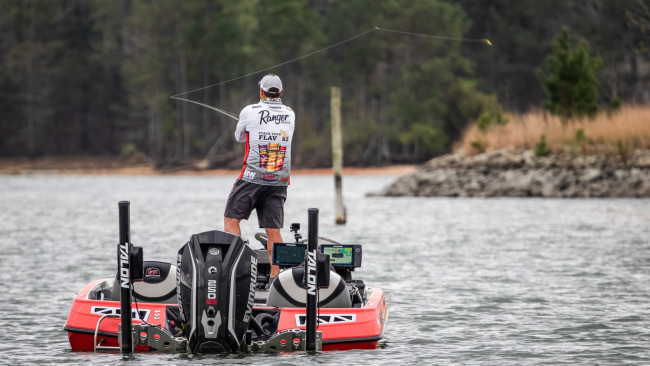 Greg Bohannan has 10 to 11 pounds. He's keeping it simple, dragging a Carolina rig on long gravel and clay points.

“Old school," he says. "You can’t beat it for spotted bass. 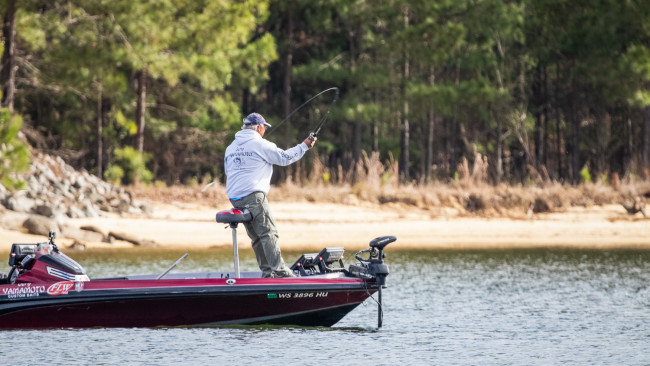 Tom Monsoor has surprised absolutely no one this week by throwing a swim jig from start to finish. He's working his jig at a pretty good clip.

“The longer the cast the more bites you get,” says Monsoor. “There ain’t no slackin off, even if you’re 70. You’ve either got to go all in or go home.”

Greg Bohannan is the first pro of the day to surpass double digits. His limit is right at 10 pounds.

Tom Monsoor has five fish now, too. His limit is pretty small.

Matt Becker and Kerry Milner now have limits. That makes six pros so far. Greg Bohannan has the best bag of the day at 9 pounds. 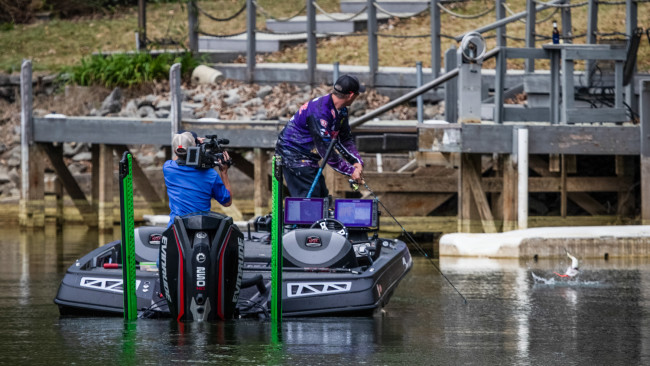 After missing a few fish, Jason Abram finally landed a quality keeper to cull up to 7 1/2 pounds. He leads Ron Nelson in second by a pound and a half unofficially.

"I just need that one biggun," Abram says. "We can make it tough on 'em today."

He's shooting for 8 1/2 to 10 pounds per day with spotted bass in the morning before he goes to his docks and slings around a Reaction Innovations Flirt Worm.

The Phoenix Replay on FLW Live usually shows positive, exciting moments. But sometimes it replays heartbreaking moments. This morning, Jason Abram's losses played out on the replay. He lost a pair of good fish, one on the way to the boat and the other as he was getting ready to swing it in. That's bad news for the tournament leader, but it's early enough to recover, and this lake is full of fish. He'll hopefully be able to recover.

9:00 – Shuffield and Strickland on different programs, have limits

Spencer Shuffield just filled his limit using forward-looking sonar to spot fish out in front of his boat, make pinpoint casts and and catch fish. It's a really cool way to fish. You can see him in action on FLW Live right now.

Laramy Strickland has a limit as well, but he's catching them sight-fishing. He had a misfortunate misstep this morning, though. Strickland was leaning too far forward to peer at a bed and slipped off the bow into the lake. 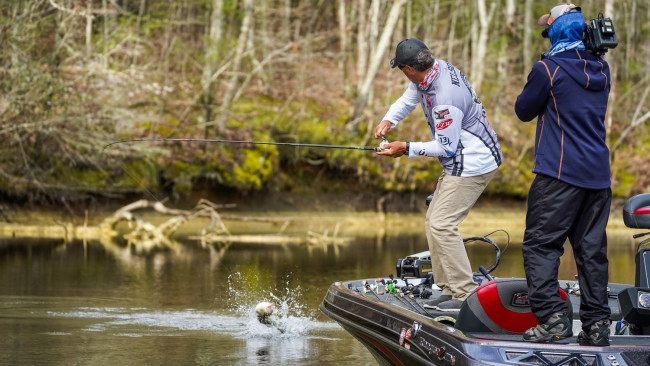 Ron Nelson caught himself a dandy. It's a 3-pounder. The area he's fishing is really crudded up with pollen. It's pretty gross, too – thick matty gunk along the bank. Spring is here, it appears. 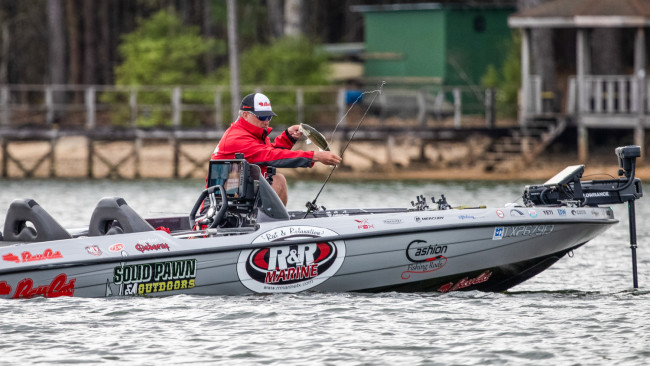 You can still sight-fish for them on Lake Martin, but that's not all. Throwing swimbaits and dragging Carolina rigs offshore is working, as is dock fishing and slinging a topwater.

Jordan Osborne is throwing a swimbait this morning and just had a 4-pounder follow his bait to the boat without biting. That offshore pattern is intriguing. It's definitely consistent, and it seems like it has the potential to produce a big limit. Several pros speculated that it might be the winning pattern in the end.

8:30 – Abram and Strickland limit out

Jason Abram, Laramy Strickland and Greg Bohannan are the current top three in the unoffiical standings, and not surprisingly they are the only three pros with five-bass limits so far today. Strickland leads everyone today with 8 pounds.

Greg Bohannan now has a limit for about 7 1/2 pounds. He's the first to get five.

Jason Abram, the leader coming into today, is slinging a topwater around this morning. It produced a 2-pounder to get his day started. "I did not throw a topwater bait all week," he says, "not a single cast." Making smart adjustments is what it takes to win. Maybe the topwater is the right adjustment for Abram today. You can watch him in action on FLW Live right now. 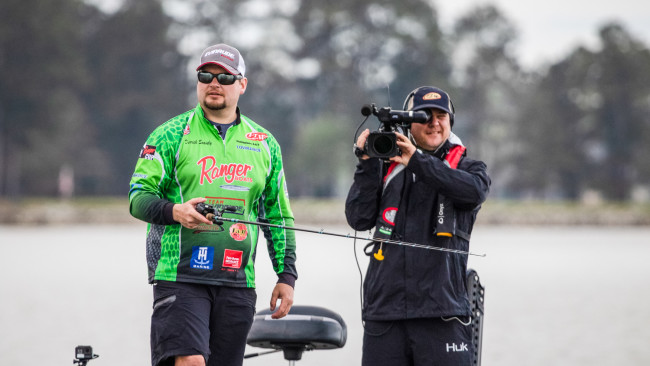 Greg Bohannan landed a 3-pounder to keep his momentum rolling this morning. He's up to 7 pounds now.

Matt Becker and Jordan Osborne each have three little keepers, and Spencer Shuffield has two.

It appears that there could be another tournament on the lake today. That, or a whole lot of people are practicing social distancing by going fishing on Lake Martin. There's a busy boat ramp down by the 63 bridge.

Snavely has started off out deep, dragging a Carolina rig and swimbait on points. It's a strategy that worked pretty well for a few guys yesterday.

Greg Bohannan already has three keepers in the livewell for about 4 pounds. That's a good start. 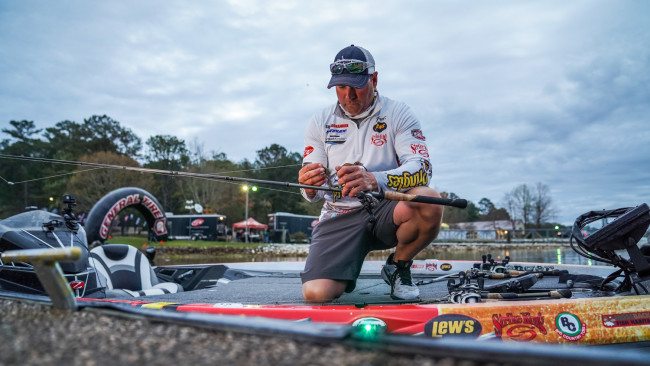 It rained last night in Alexander City, Ala., but probably not enough to have a major impact on the outcome of this tournament. Maybe a few pockets will be stained. Maybe the rate at which the water is falling will have slowed down. We'll have to wait and see.

Today promises to be a showdown of sorts. Jason Abram's strategy of targeting spots in the morning with a swimbait and then fishing docks wiht a floating worm has landed him in the lead for two straight days. But Ron Nelson and others have sight-fished their way into the top 10 on the backs of quality spawning largemouths, and they're hoping to catch Abram and squash his dreams of a win.

Then there's Spencer Shuffield, who's fishing offshore using forward-looking sonar to locate and catch suspended fish. His pattern has been consistent for three days.

Or will it be Greg Bohannan who gets the win this week. Bohannan's father dad died last week from cance, and he says he’d sure like to win one for his dad.

“It’s fishing just like Beaver Lake in the old days," Greg says about Lake Martin. "I’m just dragging a Carolina rig out where the fat spots are spawning. Guys are talking about getting 50 bites, and I’m getting 15.”

Yesterday, Greg fished for largemouth for four hours and had a 4-pounder hit his buzzbait and not hook up. He's going to swing for the fences with the topwater again today and see if the combination of patterns can land him at the top.

Stick around today to see how this plays out. FLW Live starts at 8 a.m. CT. It should be a good one.