Canada Back on Track

After rough 2019, Alabama pro cruising along in sophomore season 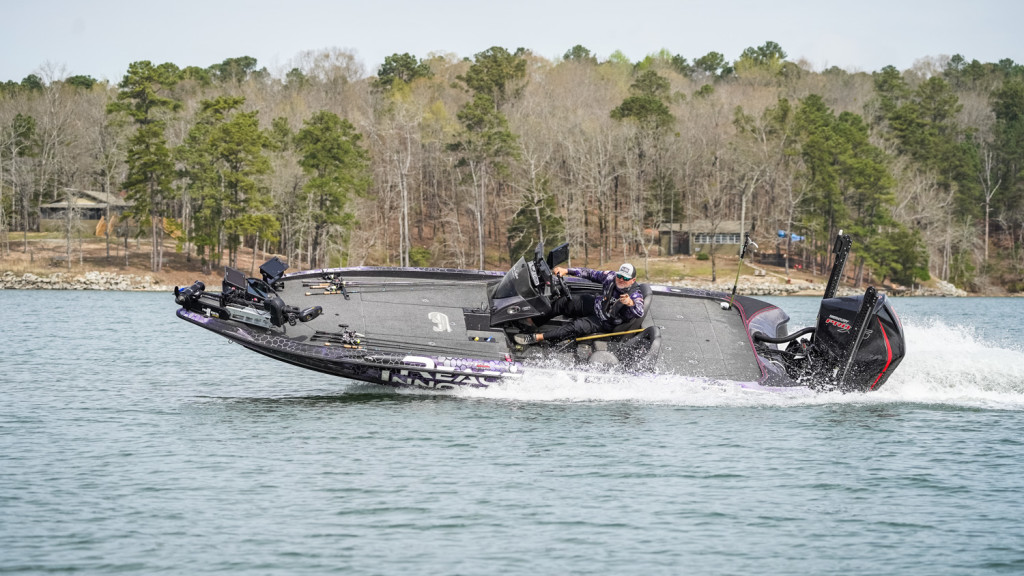 Among the many new anglers climbing the ranks of professional bass fishing nowadays is Alabama’s Jon Canada. At 40 years old, Canada might be a little older than some of his fellow “new faces” in the sport, and he’s not really all that new, considering he’s been tournament fishing for nearly half of his life. However, it wasn’t until 2019 that Canada qualified to fish the FLW Tour and compete at the pro level. And while his first season at the pro ranks wasn’t without some hardships and rookie mistakes, he’s proved that he can rebound in a big way. Canada currently sits third in the Tackle Warehouse Pro Circuit Angler of the Year race.

Given the hiatus in bass tournaments for the time being, it seemed as good of a time as any to get to know the Helena, Ala., pro. 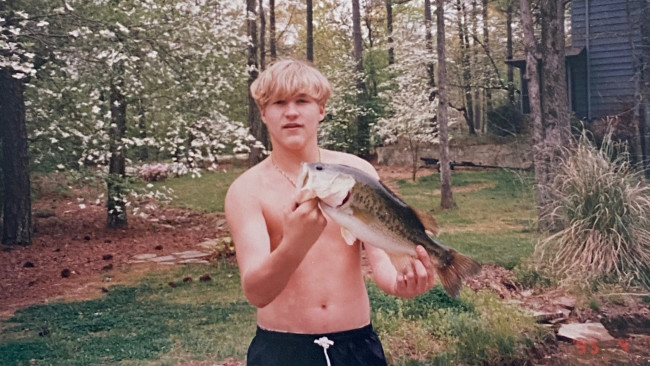 Canada has spent his entire life in Alabama. He grew up south of Birmingham in Pelham and now resides just down the road in Helena. Canada’s parents divorced when he was 4, but the silver lining was that he was fortunate to have both his dad, Billy Canada, and stepdad, James Franks, around as mentors growing up.

Fishing was something Canada always loved to do, but he never had someone to introduce him to tournament fishing. In fact, most of his fishing abilities were self-taught.

“When I was a kid my dad used to launch me in the Warrior River on his way to work and tell me not to crank the big motor, and he’d pick me up when he was done,” Canada says. “I just loved being out there, and of course my dad and buddies would fish with me sometimes, but I wanted to spend as much time on the water as I could because I love fishing. I learned a lot from just being on the water.”

While fishing was something Canada did for fun in his youth, it was hunting that really stole the spotlight. Deer and turkey hunting were the things that fueled him, and that’s how he thought he’d make his living at first.

“I went to Southern Union State [Community College] for two years, but I was guiding turkey hunts to make money during that time,” he says. “Well, after school, guiding wasn’t going to pay all the bills, so I came back home and started doing electrical work to make some money. During that time is when I started getting into tournaments, especially night tournaments around the house. I could work during the day and then go fish at night and make some more money and have some fun.” 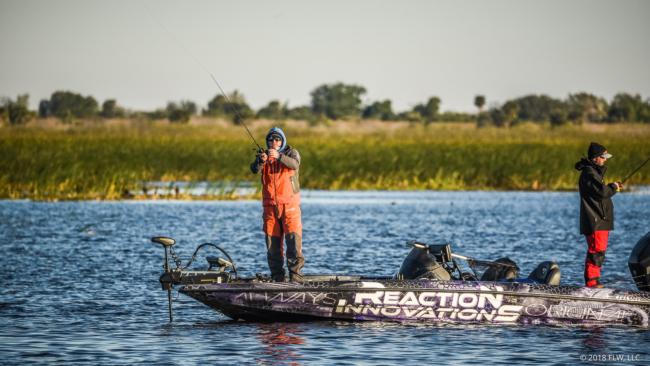 For a while, fishing close to home was the perfect deal for Canada. Working small tournaments into his schedule when they fit while still being able to work full-time was the perfect blend. But as he started fishing bigger pro-am tournaments on the Coosa River system, he realized he needed to branch out a bit.

“Me and another buddy figured out how to catch them up the river in current pretty good,” says Canada. “But when I’d fish bigger tournaments, I kept drawing guys that were good local guys, and I didn’t want to show them my stuff. That’s when it hit me that I needed to go fish away from home.

“So that’s when I looked at the Toyota Series schedule for 2017 and saw the Southeastern Division was going to go to lakes where you could fish shallow. That’s how I grew up fishing, so I signed up and spent a week on Okeechobee to practice.”

That Okeechobee tournament would be his first tournament outside of Alabama, and it resulted in a 112th-place showing. Next up was Seminole, where he barely grabbed a check by finishing 53rd. The last stop was on Chickamauga, where he finished 64th. It wasn’t exactly the showing he was looking for in his first campaign at a higher level, but it wasn’t enough to deter Canada from giving it another go in 2018.

Starting back on Okeechobee the next season, he finished 16th. Then he took 41st on Seminole and wrapped the season with a third-place showing on Santee Cooper, which put him third in the Strike King Angler of the Year standings and qualified him for the 2019 FLW Tour season.

“A lot of those lakes I just learned from in 2017,” Canada says of his solid 2018 performance. “I really enjoy fishing shallow-water stuff, and that schedule was perfect for it. I’d never been to Santee before, but it’s one of my favorite lakes now.” 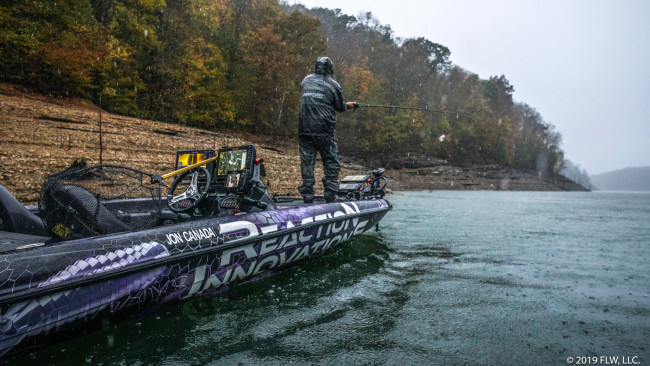 Dealing with a loss

From the outside, 2018 seemed like a solid year for Canada, but back home was a different story. Canada’s stepdad, James Franks, had been diagnosed with stage 4 Lewy body dementia, a disease similar to Alzheimer’s with additional physical challenges. Between tournaments, Canada was helping his mom, Deborah, take care of James.

“I really wanted to keep that momentum rolling into 2019, but when my stepdad got diagnosed with Lewy body dementia it was tough,” Canada says. “I was trying to help my mom as much as I could with caring for him. By July 2017, we were dealing with a lot.”

James passed away June 29, 2018, and with his passing, Canada says he lost the motivation to go fishing.

“When [step] dad passed, I just quit fishing,” he says. “I didn’t pick up a rod for five months before I went to prepractice for the Tour event on Rayburn.”

The rust and the layoff affected his performance. After a decent practice, Canada finished 152nd in his first tournament at the pro level.

“I had my second-best practice I’ve ever had on Rayburn, but I couldn’t adapt to how I needed to catch them in the tournament,” he says. “I wanted to do good for my stepdad and prove I could hang, but my head wasn’t in it. It made it tough.

“After Rayburn, I drove straight home and left the boat hooked up. I made myself go fishing for a week straight.”

Despite trying to get his mind right in his rookie season on the Tour, Canada could never fully commit. His mind was always wondering how his mom was doing back home alone, and he couldn’t stand being on the road. Though he cashed three checks in 2019, he also put up two triple-digit finishes and settled for 98th in the Angler of the Year standings at the end of the season. 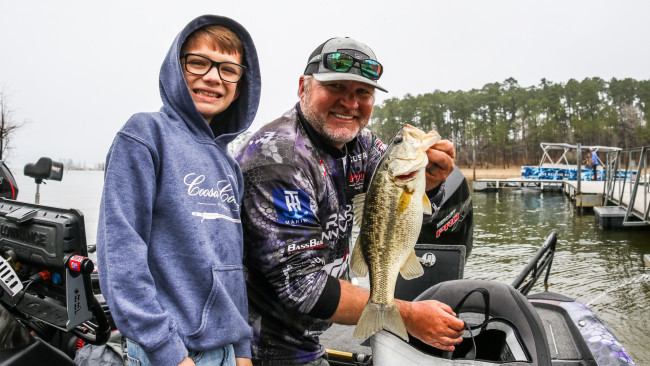 Getting things right at home this past offseason left Canada ready and hungry to tackle the inaugural season of the Tackle Warehouse Pro Circuit in 2020.

“Everything is good at the house. My wife, Ashley, and son, Gage, are awesome and make sure things are good at the house while I’m gone. They do so much for me, and I’m so thankful to have them in my life. And my mom is doing good, too.

“This year I got a Lance camper to try and avoid having a pile of people staying in a house at a tournament like I did in the past. I think the camper feels like home and helps me stay focused instead of hearing dock talk when I get off the water. I can do my own thing.”

Apparently, it’s working. Canada got some redemption on Rayburn with a top 10 to start the season.

“At Rayburn, in practice I was catching decent fish where everyone was practicing, but then I ran up the river and caught a 3 and a 3 1/2,” he says. “I had 19 bites up the river the last day of practice, and I knew it would be something not a lot of other guys were doing. If you can catch 2 1/2-pounders or 3s all over the country, you’ll do good, so I knew that’s where I needed to go.

“I feel like I needed to learn when to lay off fish for this year, because in the past my mind would be thinking I had to catch one bigger, so I’d keep catching them. On Rayburn, I caught them good on the first day and backed off. I just want to be consistent this year, and I think I’ve done that so far.”

After Rayburn, Canada kept his momentum rolling with a 20th-place finish at the Harris Chain, which was a special tournament for him because it was the first time his mom got to be there during weigh-ins instead of watching from her computer at home. From there, he’d bank another top 30 settling 21st at Lake Martin. Once fishing gets rolling again, Canada is ready for it. He’s at a point where he can focus on competing and have his mind in the right place while trying to accomplish his goal of getting a win at the top level – whether it be winning an event or AOY.

“You want to do good for yourself and to represent yourself, but I really want to win one not just for me, but also my stepdad, my wife and my family. I’d love to win AOY, and if I stay consistent and make the right decisions, well, if it’s my time then that’s what’s gonna happen.”