What to rig up for this fast-paced bite 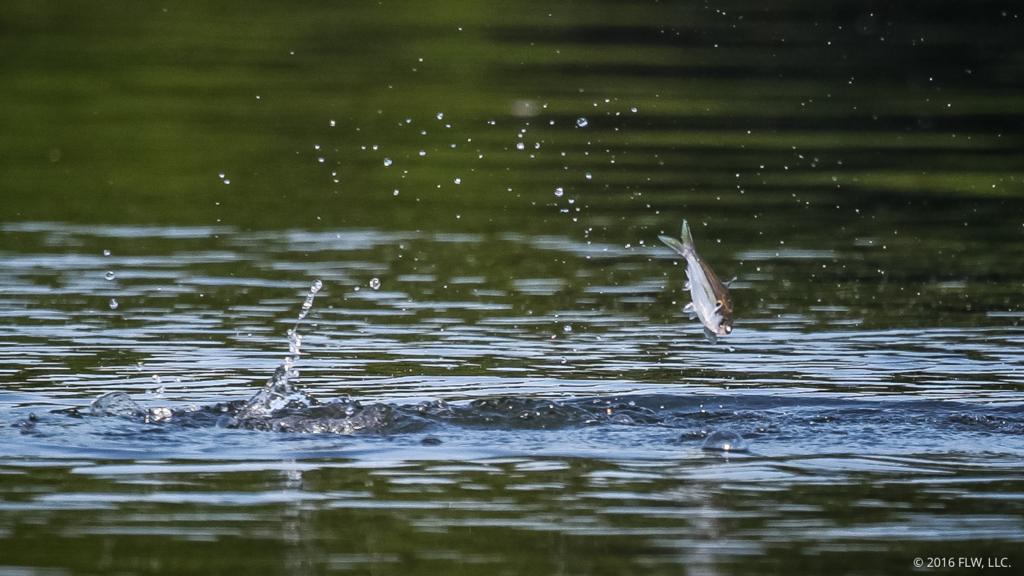 With the bass spawn winding down across the South, it’s time to capitalize on the shad-spawn bite. Shad spawn patterns usually don’t last long into the day, but fishing the shad spawn can be a fantastic way to catch a pile of fish and some big ones to boot.

So, if you’re scratching your head about what to throw to get the most out of this bite, don’t worry. We checked with a handful of Tackle Warehouse Pro Circuit pros to see what they have tied on to put fish in the boat during the shad spawn. 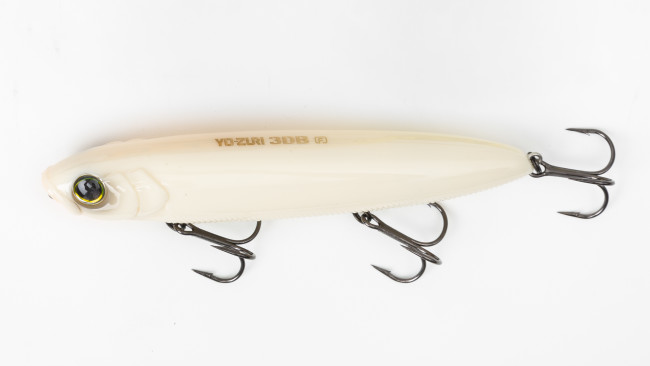 “I’ve got a couple, really, but mainly I like the Yo-Zuri 3DB Series Pencil. There’s a really unique sound to that thing, and it’s amazing how well they bite it. I like throwing the bigger size [125] in a bone or black and silver color, but I like the smaller one, too. It has to do with the size of the shad. If you’re in a blueback herring place or have bigger shad, like gizzards, I like the 125. For threadfins or smaller shad, the 100 is perfect. Our shad haven’t quite started spawning here yet, but I’m still catching a ton on that bait. Most are probably fry guarders, so it covers your bases if the shad spawn isn’t really going. The main reason I like it is because you can make such long casts with it, and shad usually spawn in such shallow areas that it can be hard to get the boat up there. With that Pencil, you can really fire it out and soak it through those areas.”

Shuffield prefers to throw the 125 on a 7-foot, 3-inch, extra-heavy Phenix Feather rod, which is actually the same rod he uses to throw a frog. The advantage of a stiff rod is that when a fish blows up on the bait, you can just keep working the bait and that’ll set the hook versus actually trying to swing on it. Then if the fish misses, the bait is still walking and not being jerked across the water. Shuffield ties the bait directly to 40-pound-test Yo-Zuri Superbraid. His only modification is replacing the rear treble with a No. 2 Gamakatsu feathered treble hook. 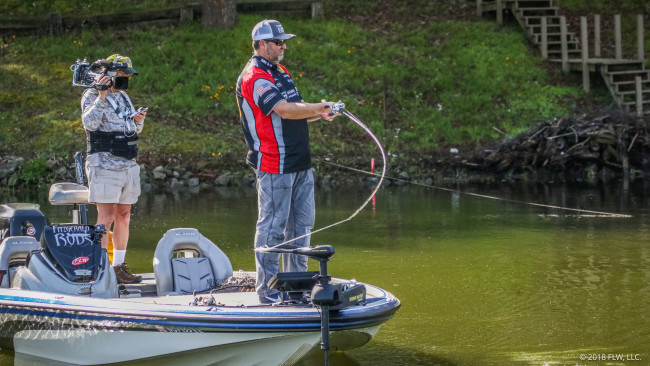 “Pretty much 90 percent of the time around a shad spawn I’m either swimming a jig or throwing a 1/2-ounce homemade spinnerbait. For the jig, I like either TrueSouth or Queen Tackle jigs because they have hand-tied skirts, which is pretty essential for skipping, and they also have good keepers to keep your trailers on. I usually throw a 7/16- or 1/2-ounce. Those are my two favorites. And for a trailer I like a Zoom Z Craw Jr. because you don’t have to give it too much action; it does a lot on its own. If you get more wind, that’s where I reach more for the spinnerbait, but for swimming a jig I like it if it’s a little calmer because you can sit it in their face a little longer.” 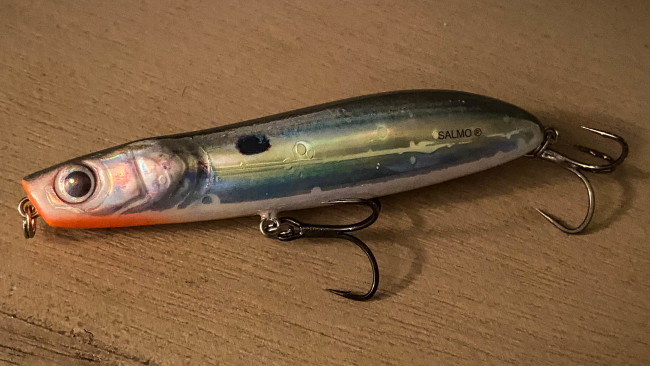 “I think it’s hard to beat a topwater like the Salmo Rattlin Stick. I throw it on a 7-foot, 3-inch, medium-heavy-action Falcon Expert and 50-pound braided line. It seems like throwing a bigger-profile walking bait gets better bites versus number of bites for me down in this area [Louisiana]. I also really like the Salmo Squarebill around a little deeper grass. The bigger shad spawn on the outside edge of the eelgrass here, and that Squarebill is a quicker way to get down to it. Honestly, it seems like the best shad spawns down here happen out off the bank, like on specific beds of grass. You don’t find it all the time, but you can find those bigger fish, like 5- to 8-pounders, out in 4 or 5 feet. You also can’t overlook a white Z-Man Evergreen ChatterBait Jack Hammer with a Zee Bait Xswimmer on the back. Those three are my favorites for a shad spawn.” 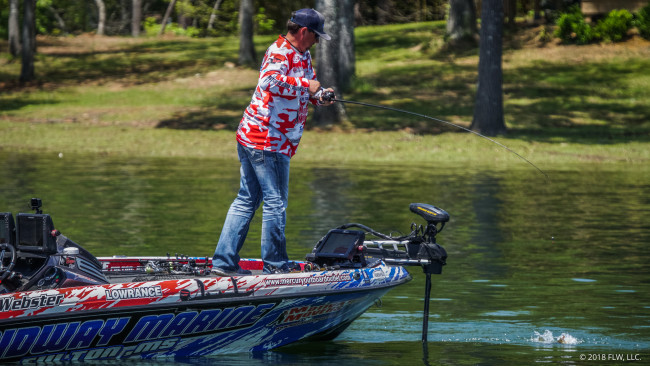 “I love a white Z-Man Evergreen ChatterBait Jack Hammer with some kind of shad-type trailer. I prefer the 3/8-ounce size only because it skips a little better around docks, wood, bushes or anything them shad will spawn on. It’s one of my favorite things to throw on Smith Lake around the shad spawn. Even in crystal-clear water on Smith those big spots just love to eat it.” 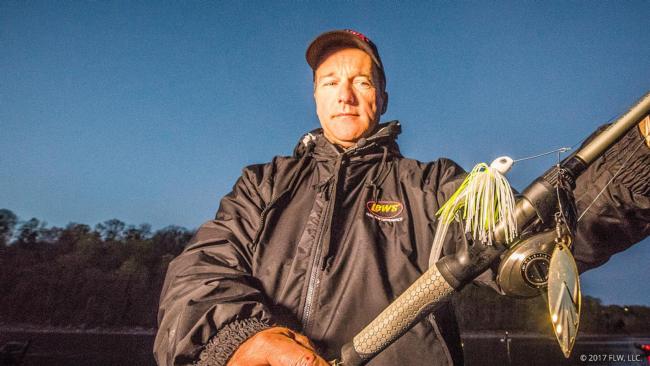 “It’s probably no surprise, but I love a white 1/2-ounce Accent River Special double-willow spinnerbait with silver and gold blades. And I always throw a pearl white Zoom Split Tail trailer on the back. That way, if a fish yanks your trailer off, you’re not out of the game; you can still throw it right back out and catch fish on it.

“If you ever pay attention during a shad spawn, the shad get in groups, and a spinnerbait kind of mimics a group of shad. It’s the perfect bait because when you’re around a shad spawn and cast out, the shad think it’s more shad, and you can feel them bumping the blades and following the spinnerbait to the boat. When a bass comes to check the school of shad out, the real shad leave, and your spinnerbait is all that’s left. They crush it. I like to throw it really anywhere shad are spawning, but if they are spawning on trees, rock or riprap it is a little better suited.”