Checking Shallow and Deep with Hays 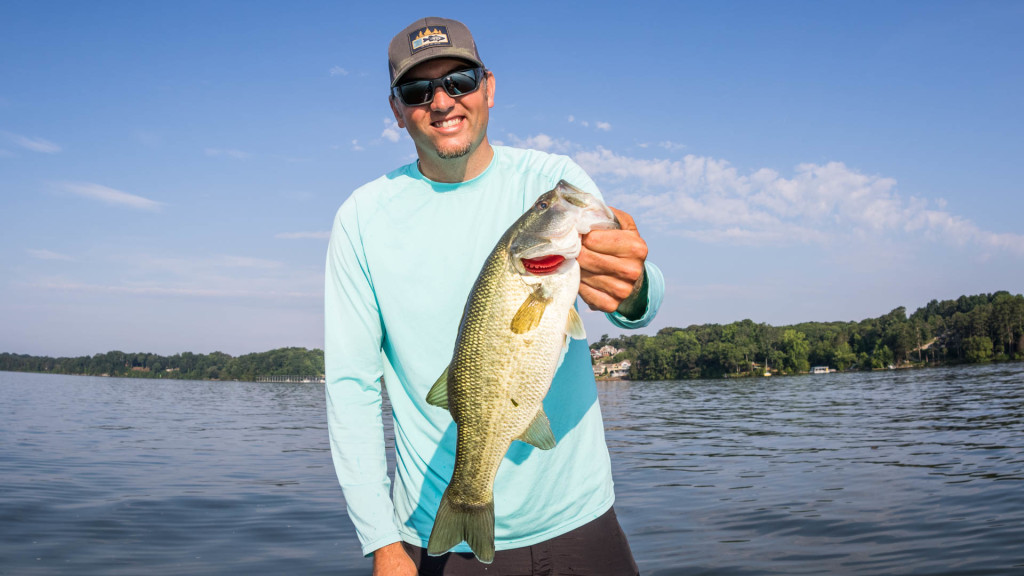 Dylan Hays has been fairly consistent throughout his four years as a pro on the Tackle Warehouse Pro Circuit, and he’s currently on pace to have his best season to date. He made the last two top-30 cuts and finished 31st at Rayburn to start the year, and because of his consistency, the Arkansas pro currently finds himself fifth in the Angler of the Year race.

While Hays will admit he isn’t the strongest ledge fisherman, he has the right skills to keep his momentum rolling this week on Lake Chickamauga for the first of three Tackle Warehouse Pro Circuit Super Tournaments. Over the last four years, Hays has visited the Tennessee River three times as a Pro Circuit pro. He bombed his rookie year at Guntersville, then made a top-30 cut on Kentucky Lake in his sophomore season and last year finished 90th on Chickamauga. So, it’s been a bumpy road.

But given the year he’s having, it only made sense to see if I could spend a few hours on the lake with him. After a short text exchange, Hays was kind enough to let me jump in the boat with him on day two of practice to see how the 33-year-old pro looks to get some redemption on Chick. 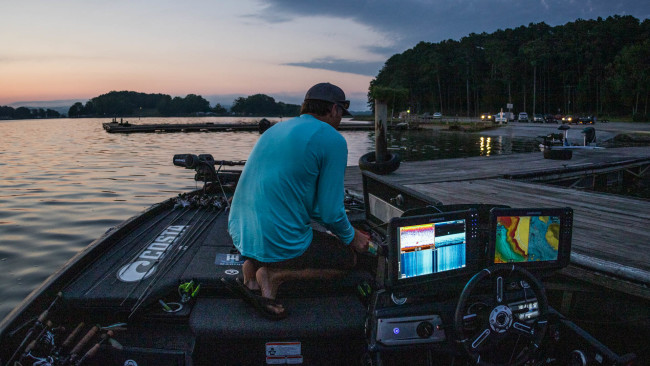 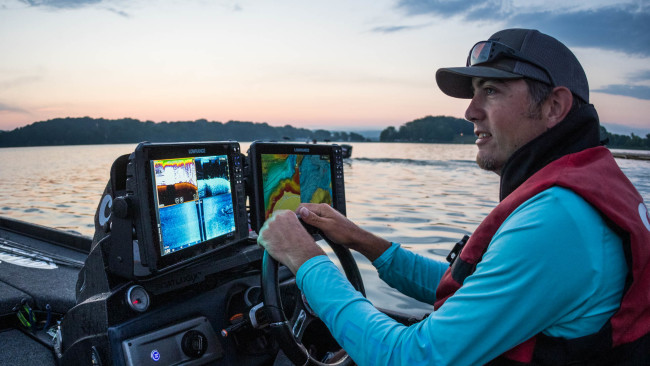 We meet at the dock at the Chester Frost Park ramp a hair after 6 a.m. Hays, along with his roommates Matt Becker, Grae Buck and Tyler Stewart, are all staying at a house a short drive from the ramp by water, so he beats me to the ramp and makes last-minute tackle preparations before we ease away from the dock to start the day.

Hays originally thought about checking out Watts Bar today, but has since reformulated his game plan.

“I’ve done pretty well the last few years, but I usually have two bombs,” Hays says of his tournament finishes. “Normally I have the bombs because I make stupid mistakes or gamble, so this week I figured I’d try to maximize my time in a certain stretch of the lake to learn everything I can to avoid any of that.” 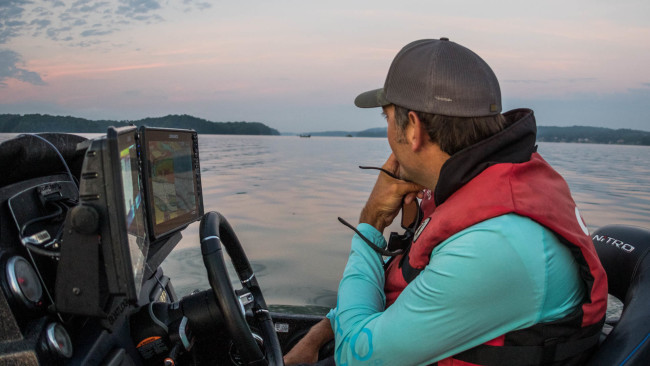 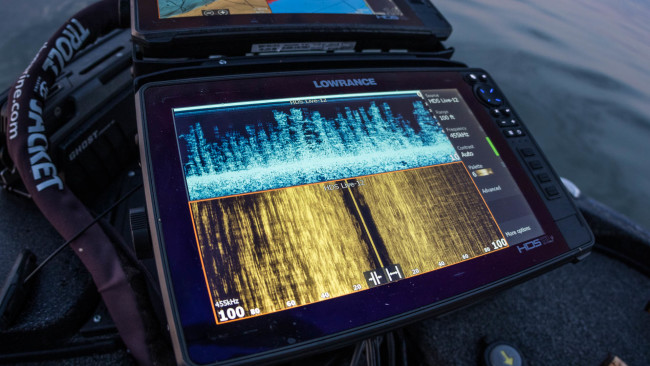 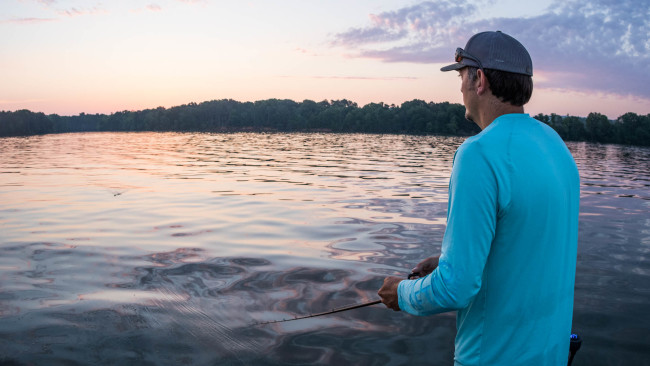 We make a quick run out of Dallas Bay to some grass Hays found idling the day prior. As he sets down, he notices Becker just a few hundred yards from us and gives him a call to see if he’s had any action yet this morning.

As Hays deploys the trolling motor, it’s immediately obvious that there is good hydrilla on the flat, and his Lowrance units reflect that. The morning has a bit of a topwater feel to it, and Hays picks up an old Paycheck Baits Repo Man to start covering some water. 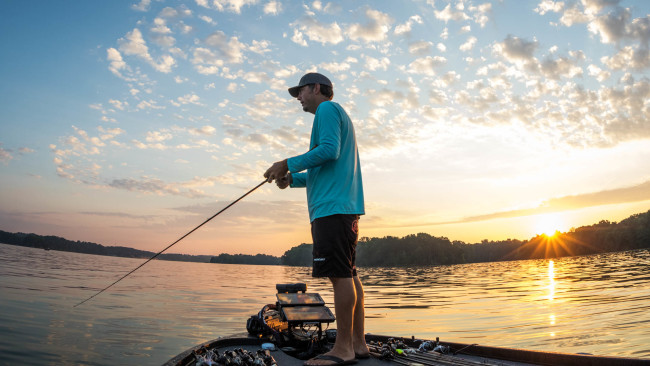 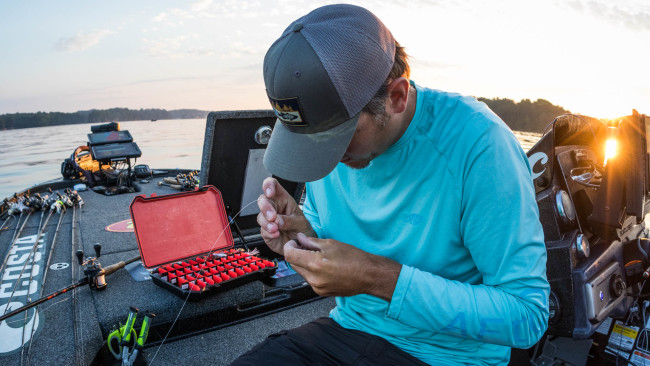 The sun is now rising over the trees and Hays puts the topwater down after no takers. He picks up a vibrating jig and fires it around for a few minutes and eventually hooks up, but it jumps off.

As we keep moving down the flat, Hays gives me a little insight into how he’s feeling about the week.

“You know, I’ve caught plenty of fish offshore, but I don’t think I’ve ever been in a straight ledge tournament like this one could be,” Hays says while retying. “It makes me uneasy. I guess I just have to try to find some sneaky places and do the best I can. I mean, I’m not against flipping docks, but I’d like to try to find some in some grass.” 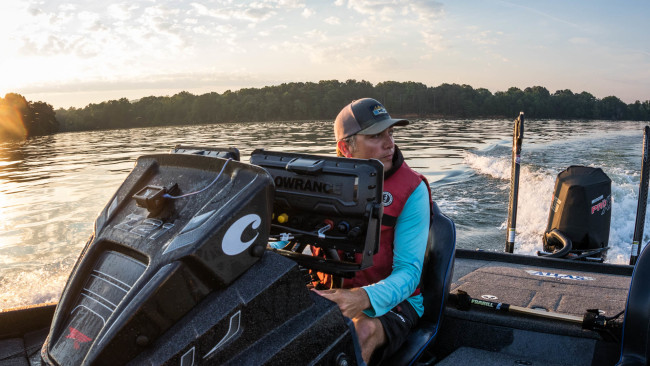 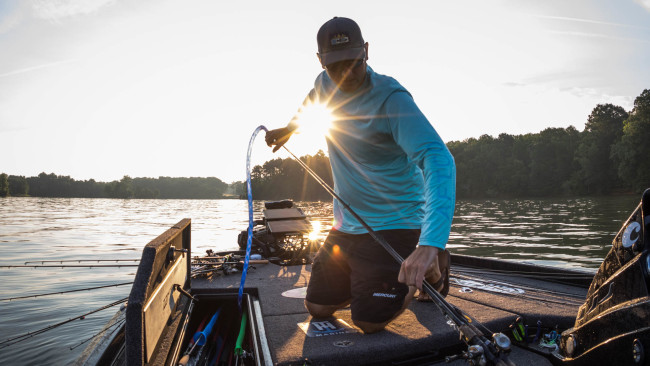 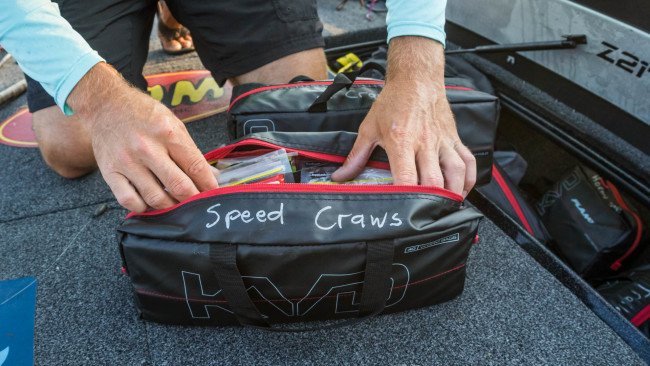 Not totally sold the fish want to chase a moving bait, Hays digs in the rod locker and pulls out a rod to flip with. He also takes the time to talk a little more about his relationship with Chickamauga.

“This will be my third tournament on Chickamauga, and sometimes I think I like this lake, and sometimes I don’t,” he says. “Last year I came here straight from the Series event on Santee Cooper and I was tired. I completely missed the bite happening up the river. I tried to force the deep bite, and I learned my lesson.

“On day one last year on Chick I didn’t have a fish in the boat by 11 o’clock and was stressing out. Now, I’m not that superstitious, but I looked back at my marshal and he was eating the biggest, yellowest banana you’ve ever seen. I couldn’t help but laugh. He ate it and I caught my first keeper shortly after that. That’s sometimes how I feel like my luck goes out here.” 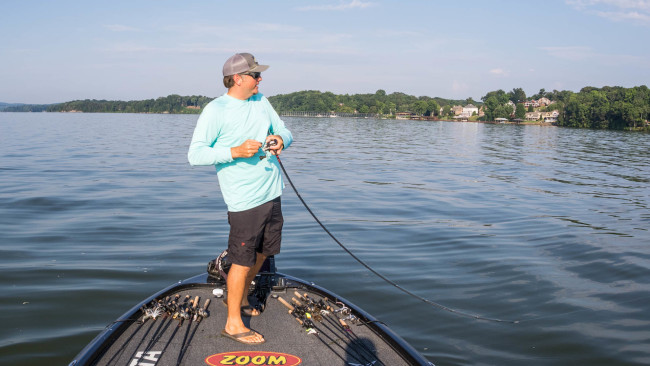 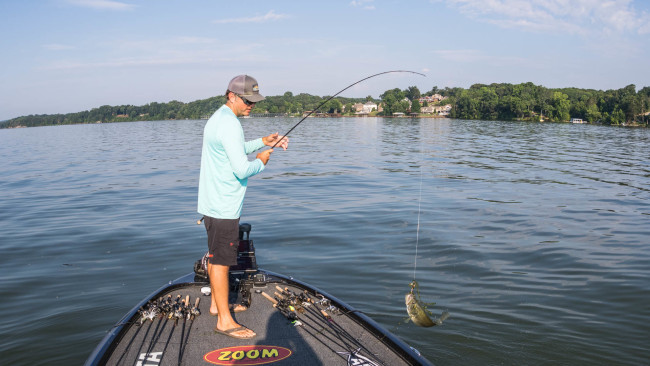 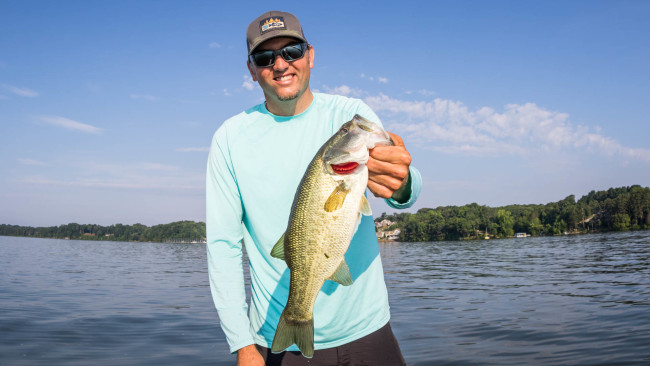 It’s about 8:45 now and Hays keeps burning down the flat and finally connects with a fish. It’s not totally the quality you want on Chickamauga, but it isn’t a bad start.

“I was hoping I’d get bit,” he says. “There seems like a lot of life in general in this area. There’s white bass schooling and shad flickering, so it makes sense we’d finally find a bass.” 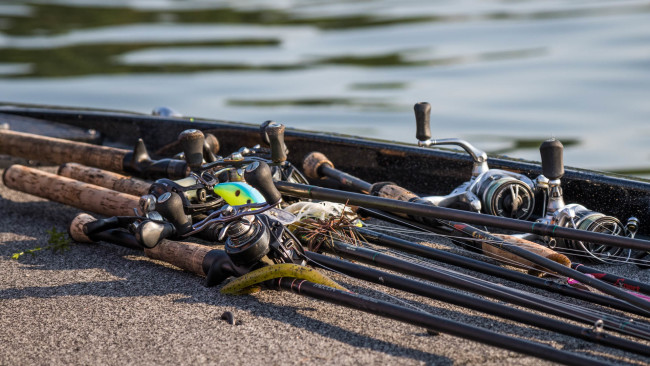 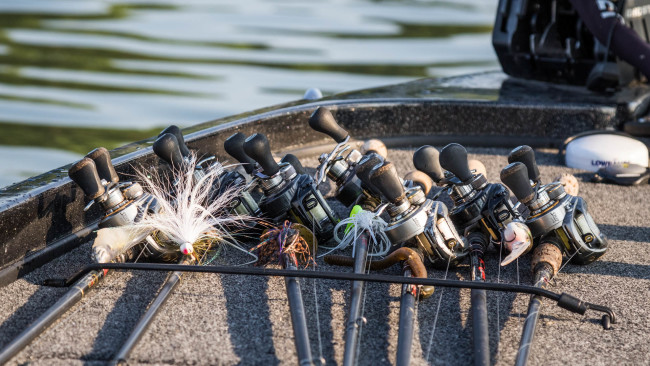 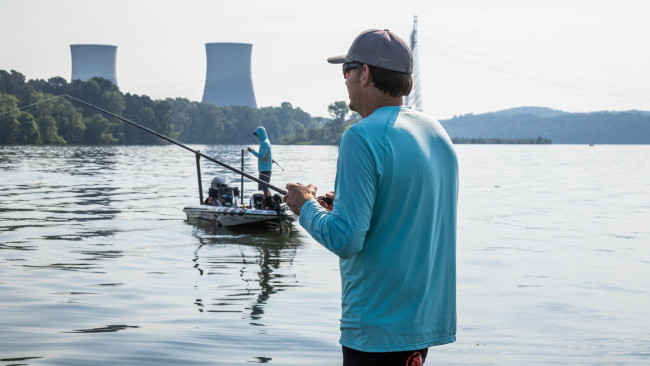 A look at Hays’ front deck and it’s easy to see he’s ready for anything. While he spent the majority of his day one of practice idling, he’s a little more willing to fish around today. He doesn’t want to put all his cards in one basket by solely focusing on ledges or solely up shallow.

“I feel like this week it’ll be better to have a stretch of the lake to bounce around in throughout the day. If you can’t get some ledges, then you could run to some grass or vice versa. I think that’s my best chance to do well.”

Fishing along, Hays bumps into Becker again. The two chat about the prospect of fishing grass, but both feel the time to begin idling ledges is approaching. 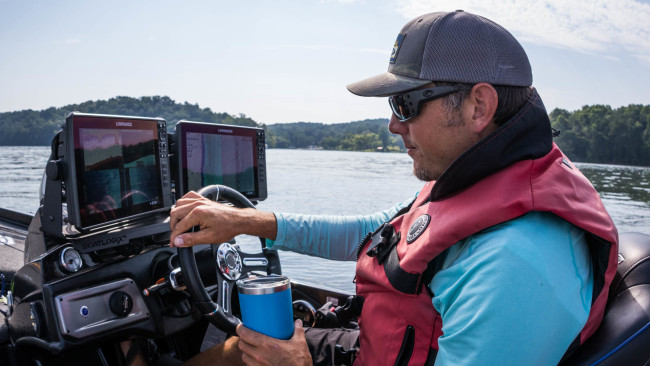 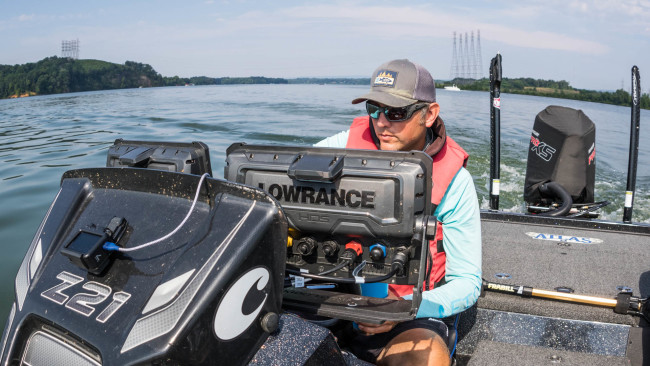 Around 9 o’clock, Hays sits down at the console, picks up his coffee and begins the tedious work of idling river ledges. 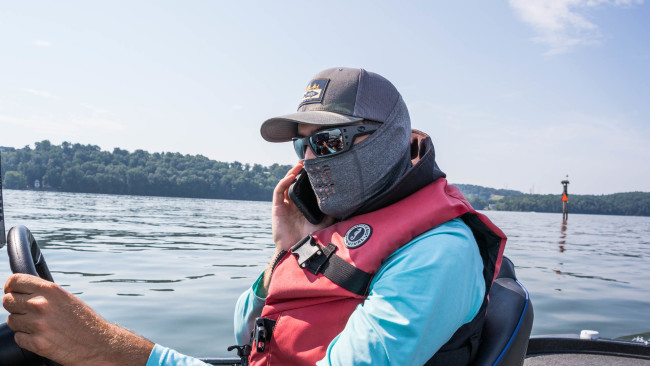 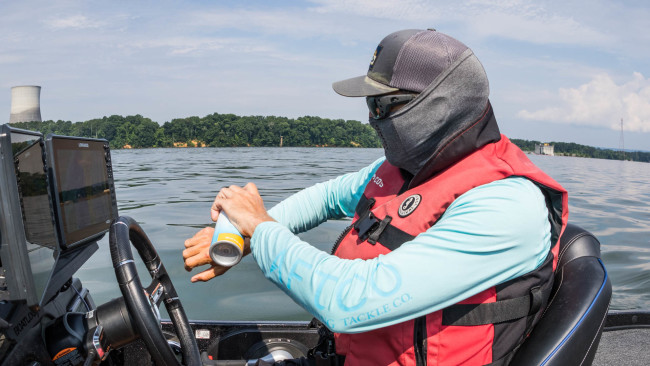 With an hour of idling under his belt, Hays remembers to give his dad, Scott, a call to wish him a happy Father’s Day.

The sun is also beating down with little breeze to speak of, and after Hays is off the phone, he remembers to reapply some sunscreen. 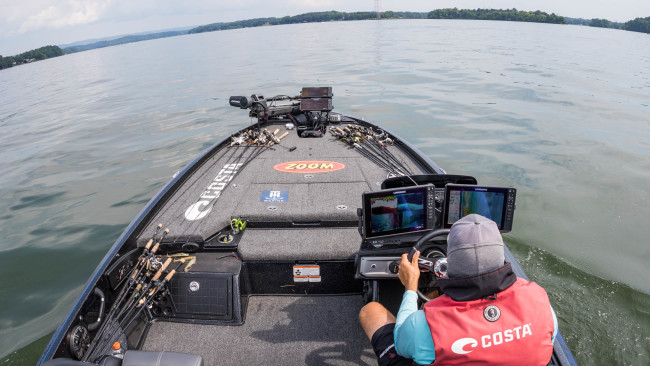 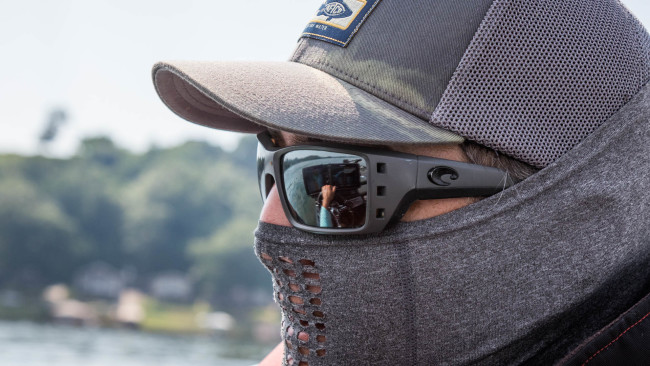 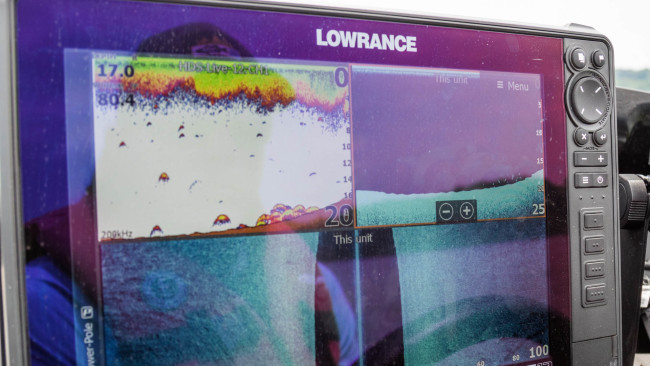 He continues to cruise up the river with his eyes glued to his Lowrance units.

He graphs a small school of bass and decides that he should make an effort to catch one or two just to see what kind of mood they’re in. 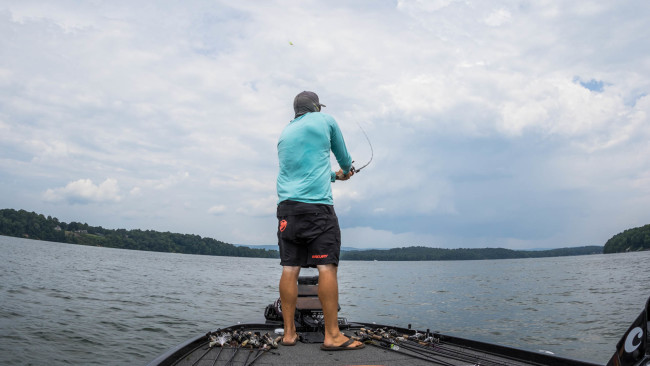 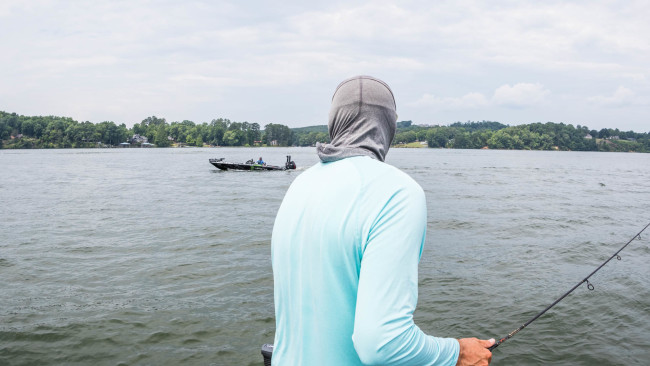 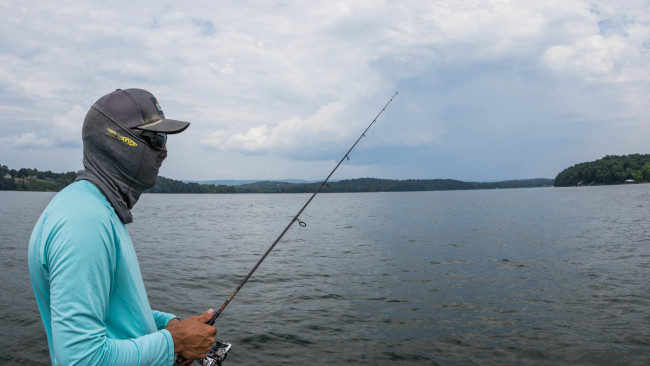 Hays spins the boat around and fires a crankbait out to the school. After several casts with no takers, Stewart stops by and the two chat about their morning before Stewart takes off down the lake.

Making the switch to a drop-shot, Hays still doesn’t get any bites. There’s a storm building to the north, so Hays decides he’ll idle a bit longer before he runs back down to the ramp to drop me off. 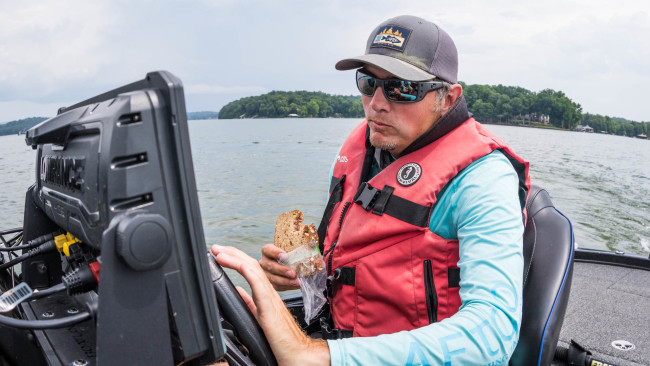 It’s about noon now, and Hays digs in his cooler for a peanut butter and jelly sandwich – the lunch of champions.

“I’ll probably keep idling until 9 o’clock tonight,” he says. “I wish I’d find another school soon to give me the confidence to keep looking. I’m kind of learning the hard way how to find fish on these ledges and where they sit, but that’s why I have to keep idling, because I won’t get better if I don’t keep looking.” 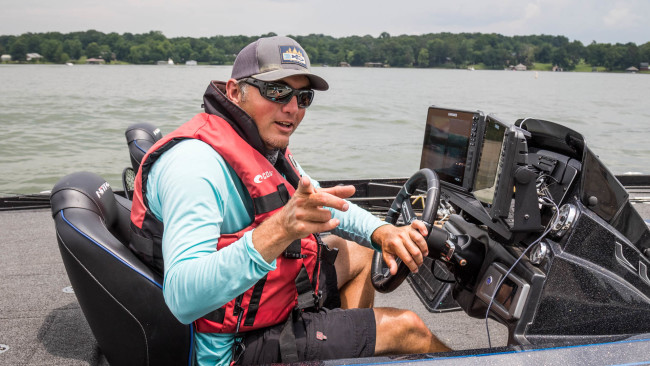 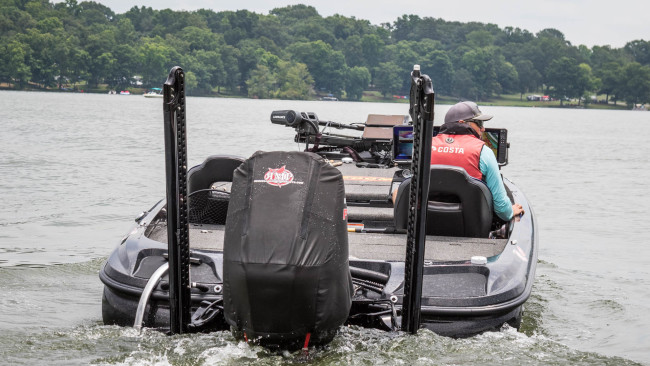 We arrive back to Chester Frost at 12:45. It’s been a decent morning for Hays, but he knows his work is far from over. He’s in a position to not only qualify for the Tackle Warehouse FLW TITLE presented by Toyota this August, but also is in very good shape to make a run at Angler of the Year with a strong finish this week. With a day and a half of practice left, Hays seems like he’s not putting a lot of pressure on himself and just having fun, and that could just be the perfect recipe for a little redemption on Chickamauga.