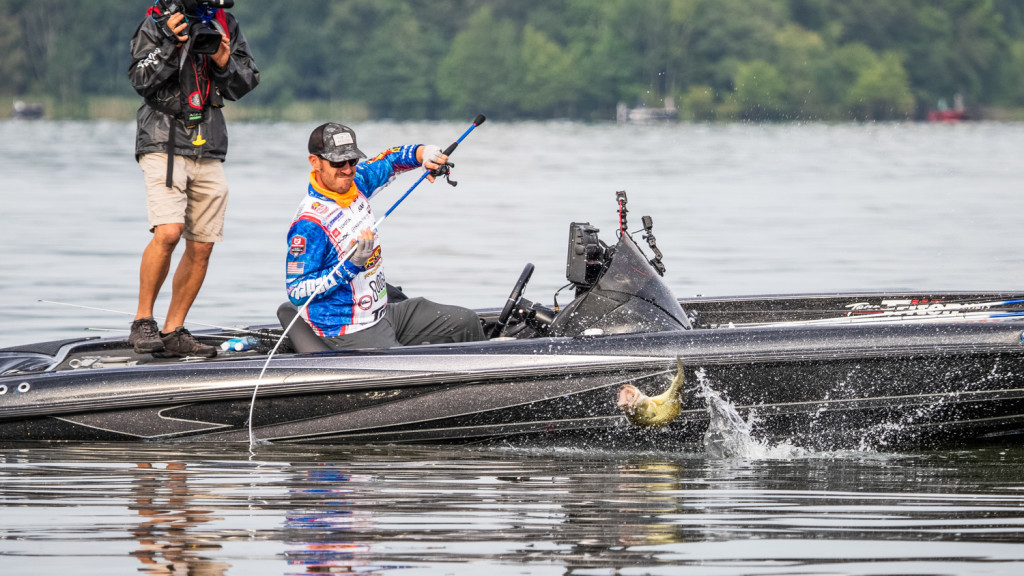 That's it for the blog. Thanks for joining us. Don't forget to tune in for weigh-in live at 3 p.m. ET. Tomorrow's FLW Live broadcast begins at 8 a.m. ET.

Tackle Warehouse Pro Circuit rookie Cole Floyd is going to make some noise at weigh-in today. He just popped a 9-pounder on a big worm to go with another giant in that same size range. He also lost a real biggun early this morning. Floyd's weight estimate is now 26 pounds. We have him unofficially in third place. Whatever Floyd is doing, he's obviously around some giants, and he's figured out how to catch them.

Jason Reyes is our current unofficial tournament leader thanks to a limit of more than 21 pounds today. But there's a catch: The Reyes weight estimate should be pretty accurate, but Jacob Wheeler's weight is likely a little light. We think he's sandbagging on the total. He also just put a 4-pounder in the livewell. So it's tough to say exactly who's in first. Thankfully, that doesn't matter right now. They're both going to make the cut, along with John Cox, Dakota Ebare, Cole Floyd, Josh Weaver and few dozen other pros in the top 50.

There remains a mix of patterns within the top 50. The ledges are producing some fish, but most of the popular community areas on the lower end are quiet. Pros have abandoned them in favor of shallow bass taking advantage of a mayfly hatch. The grass fishing has also been good. More sunshine in the forecast tomorrow should make the grass bite even better.

It's going to be a fun one tomorrow as we find out which pattern has the longevity to carry through to Friday. Stay tuned. FLW Live will stream until 2 p.m. ET. Don't miss it.

One big kicker goes a long way in this tournament, with the weights packed together. Arkansas pro Kerry Milner knows this well, and he got in on the big-fish game with a 7 1/2- to 8-pounder. That moves Milner into the top 10 with a limit worth more than 21 pounds today.

If you're not watching FLW Live, you're missing out. John Cox is doing what John Cox does: putting on a display of shallow-water fishing dominance. Cox missed a 4-pound bass on a frog up in some shallow grass, wheeled around and was able to actually spot that same fish. He threw back in with a Berkley PowerBait MaxScent The General soft stick bait and gently coaxed the fish into biting.

After Cox got the fish in the boat, FLW Live host Marty Stone declared it one of the coolest fish catches he's ever seen. If you watch it, you'll probably agree.

Cox has a knack for just being around big bass. He's just so fishy. And there might be no one in the game who's better at visual fishing in shallow water.

"We might've missed bed-fishing in a bunch of tournaments," Cox said, "but, man, that was as close as it gets to it."

The General is the same soft stick bait that Cox used when he won the FLW Tour event on Chickamauga last season. He says it's "the same one I always use here."

This morning, Cole Floyd lost a bass that might've weighed around 8 or 9 pounds. It was a tough break, for sure, but Floyd righted the ship just a few minutes ago with an 8-pounder. Floyd's weight estimate is 19 1/2 pounds, putting him in the top five unofficially. One of the Tennessee River's top stars, Floyd will be fishing this weekend. 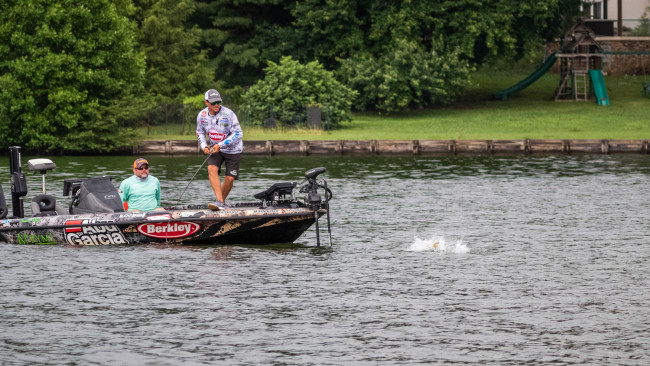 So far today, pros have had to deal with some stark differences in weather conditions. Yesterday, the wind stirred up the lower end, creating a steady chop. Today, it's slick and calm. Yesterday, it rained off and on all day and stayed cloudy with just a few brief windows of sunshine. Today broke with a little cloud cover in the morning, but now it's sunny, with a few big, puffy clouds, and it's hot. We might still get some rain later this afternoon, but overall, the changes are taking their toll. Fishing has been tougher today. Guys are catching fish, but they're having to really work for it 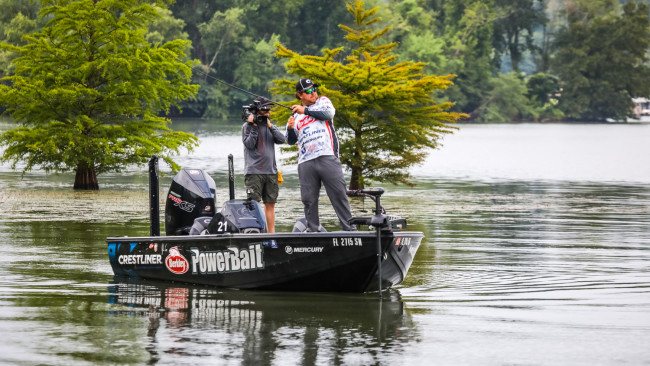 Big fish, and lots of 'em was the story of the morning here on Lake Chickamauga. We're still receiving reports of some really nice bass being caught, resulting in weights stacking up in the mid- to upper teens. Jacob Wheeler is still in the lead thanks to a strong hair jig bite, but Jason Reyes is right on his heels with a solid grass pattern. John A lot of eyes were on John Cox today as everyone wondered whether or not he could repeat his shallow-water success from yesterday. He's stuck on 11 1/2 pounds and is doing a little head scratching. Cox just can't seem to figure out how to get bigger bites. He wonders if his bass have left, or if he's already caught the good ones.

That doesn't mean the shallow bite isn't there. It absolutely is working, which is evident because there are fewer boats on the ledges today. 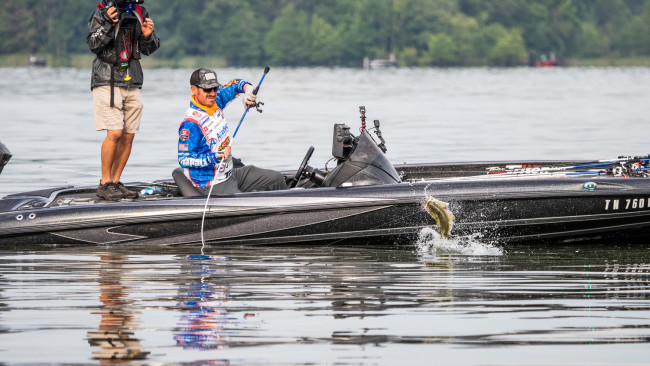 Jacob Wheeler has hit the 16-pound mark thanks to a flurry of activity in the last 20 minutes. He's catching fish on just about every other cast on a hair jig and is now back in first place and well on his way to maintaining his lead from yesterday.

Interestingly, there seems to be fewer boats on the ledges today compared to yesterday. That shallow bite is tempting, and the conditions are still good for getting bit up shallow. Wheeler, however, continues to fish offshore and appears to have dialed in these Chickamauga ledge bass. 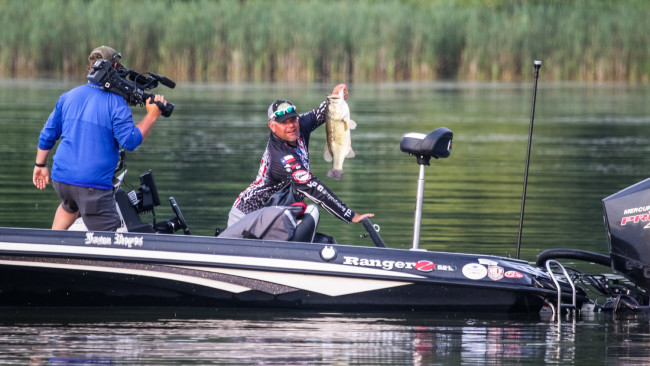 You don't need to catch a lot of fish when you're catching the quality that Jason Reyes has found. He's fishing a nail-weighted worm in some grass and has landed two keepers that combine for 12 pounds, 12 ounces. He told fans on live that he doesn't expect to get bit very often, but when he does get bit, the bites come in twos and threes. After he cuaght his last keeper, which weighed 5 3/4, he lost another one. He's on 'em; just needs to land 'em.

David Williams has three bass for 14 pounds, which is an impressive start. What's also interesting is that Williams was fishing around a series of docks and the back of a small pocket – entirely not June-like fishing on Lake Chickamauga. Williams is a talented shallow-water angler, though. He knows how to find and catch 'em on the bank any time of the year. And with bluegills and mayflies both active on the banks, he's likely found a cool forage-related shallow pattern that's obviously led him to some high-quality bass. 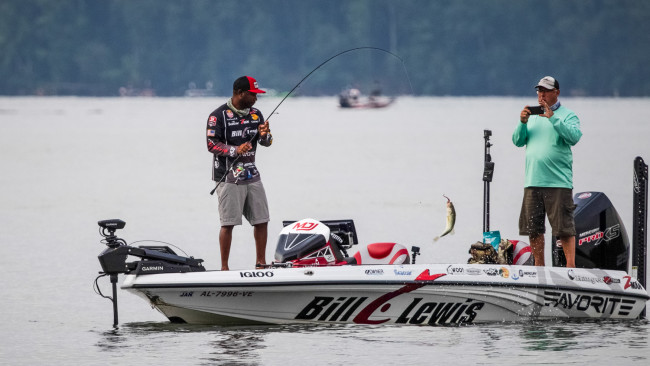 The catch reports have slowed down a little bit, but when we do get updates, they all seem to be about 3- to 4-pound fish, with a handful of 5- to 7-pounders mixed in. Overall, fishing might be just a hair slower than yesterday, but the quality of the fish seems to be good.

Fred Roumbanis has four fish for 16 pounds thanks to a giant kicker. David Williams has three fish for 14 pounds. They're both on track to crack 20 pounds today.

John Cox is in a debate with himself right now. Stay or go? Frog or not? Commit or quit? He's got two keepers in the boat, but the bite just isn't what it was yesterday, when he caught 23 pounds, 6 ounces. It's tough to leave an area with that kind of potential. Then again, it's easy to get burned by fishing yesterday's water.

Jacob Wheeler seems like he's on cruise control. The Tennessee pro is fishing a popular area on the lower end of the lake. He's graphing fish and casting at what he sees. So far, it's worked for four keepers. 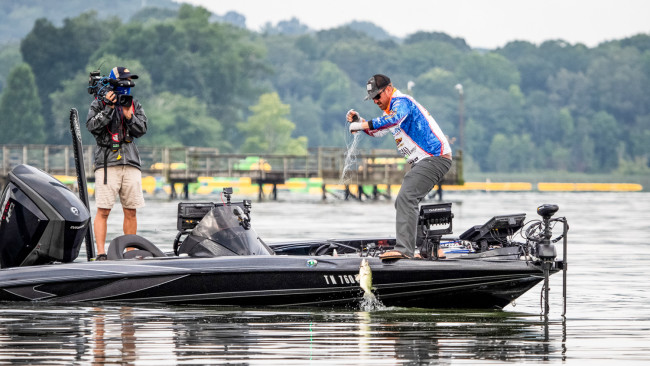 John Cox caught his first two keepers today out of the same small patch of pads as he fished yesterday. He says he can't get bit anywhere else in that area, and it's a great source of frustration for him.

Jacob Wheeler has had an interesting morning. Despite having to skip a couple of his go-to places because other boats were on them, Wheeler has managed to get a couple keepers in the boat. He actually broke off a fish on the hookset and hand-lined it in to the boat. Talk about a lucky break.

Fred Roumbanis' marshal just reported that the pro landed an 8-pounder. We're headed there for more updates. You'd better follow the leaderboard, and you'd better tune in for FLW Live. It's up and running right now. 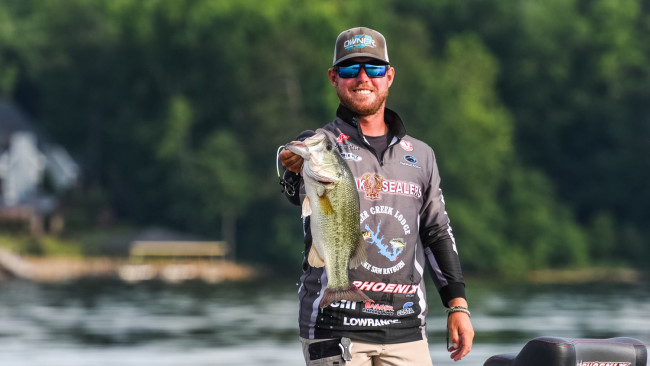 Everybody is catching fish this morning. The updates are pouring in. The most notable report so far is from Dakota Ebare, who's already approaching 20 pounds. We have him with an estimated 19 pounds, 12 ounces. John Cox has a couple of quality keepers in the boat, and Justin Atkins is up over 13 pounds. We've heard of quite a few 3- to 4-pounders already caught, plus Jason Reyes' 7-pounder.

About half the field is still fishing in the lower end, sharing grass beds and ledges, and still catching bass. There's also a very productive mayfly hatch going on right now. The mayflies have the bluegills stirred up. The bass are eating the bluegills. The pros are catching the bass. It's a whole food chain pattern going down. 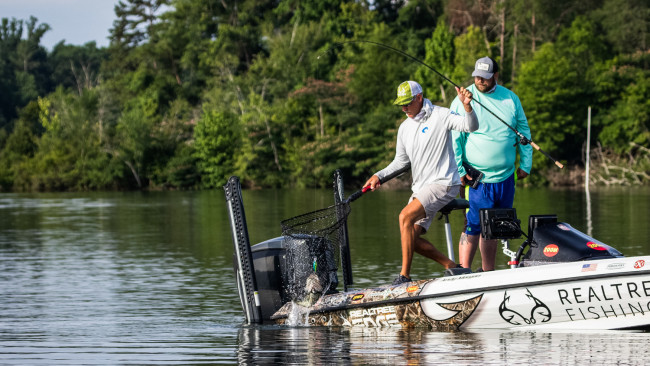 Andy Morgan already has two keepers in the boat, which he caught below the Watts Bar Dam. Now he's making his way through the lock into Watts Bar. 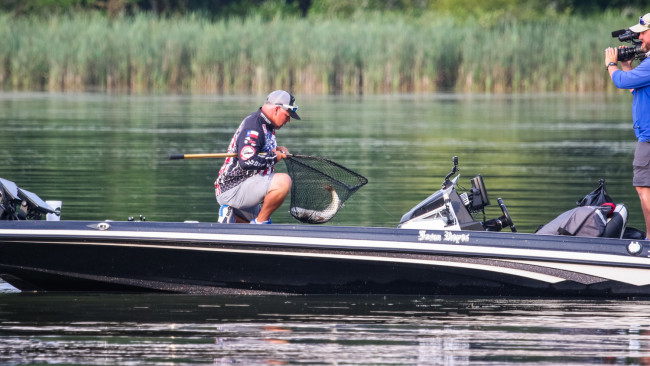 Shaw Grigsby is now up to 17 pounds. What a way to start things off. He's not the leader, though. Jason Reyes currently sits atop the standings thanks to his one fish – a whopper of a 7-pounder. He's fishing a grass flat in a community area. That fish probably punched his ticket to the weekend.

Conditions are pretty good for getting bit on reaction baits right now, so expect a lot of pros to be winding ChatterBaits, swimbaits and crankbaits, or to throw topwater.

Shaw Grigsby wasn't wasting any time this morning. The veteran MLF pro put four bass in the livewell worth 13 1/2 pounds within the first 30 minutes of the morning. We're expecting another topsy turvy day of weather changes, so capitalizing on the early bite and putting a nice cushion in the livewell should take a lot of the pressure off later, when Mother Nature really starts throwing down her challenges.

In a turn of events that surprised no one, MLF superstar Jacob Wheeler took the day-one lead at the Tackle Warehouse Pro Circuit Super Tournament on Lake Chickamauga with more than 24 pounds yesterday. Wheeler lives in east Tennessee and is lethal on just about any body of water. He's also ranked as the No. 1 angler in the world. Wheeler has already won a summertime tournament on the Tennessee River. He was crowned champion at the Toyota Series event on Lake Pickwick just a few weeks ago. Adding a Super Tournament trophy to his mantle is easily possible. But, there are still three days to fish and 203 other professional anglers hoping to steal away Wheeler's hopes of another W.

We'll keep you posted throughout the day as events play out. Don't forget to tune in for FLW Live starting at 8 a.m. ET.

Precipitation: 44 percent chance of rain with thunderstorms possible at times