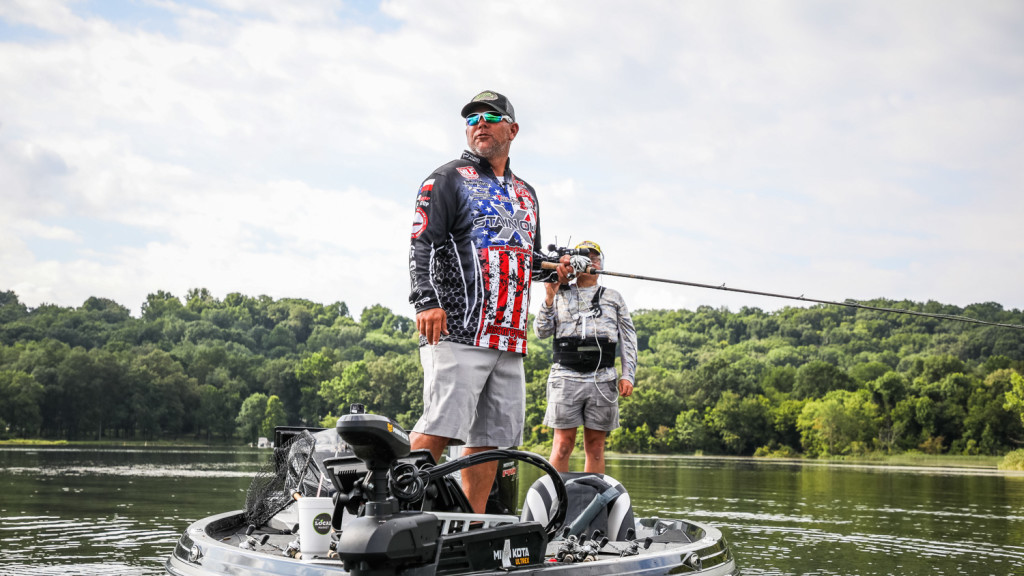 Miles Burghoff is the third pro to cross the 20-pound threshold today. He will most likely be fishing on the final day tomorrow.

And that is the last update of the day. Thank you so much for following along on FLW Live, the Live Leaderboard and the day three coverage blog. Join us in an hour (3 p.m. ET) for the weigh-in, which will stream live at FLWFishing.com.

Alex Davis and his marshal refigured the Alabama pro's weight, and it came out to about 20 pounds. He's now in sixth place. Cody Meyer is also having a big day. He has 17 and change thanks to a great biggun' and will likely be fishing tomorrow.

In a slugfest like this, you can't afford to lose or break off fish. Cole Floyd might wind up paying the price for it. He lost an absolute giant yesterday. Today, he broke off a pretty good one that would've helped his bag. After that loss, Floyd caught seven fish in a row, but none of them helped. Tackle Warehouse Pro Circuit AOY leader Ron Nelson also busted off a good one that might have moved him up within flipping distance of cut range.

In the last 30 minutes, John Cox caught fish No.4, 5 and 6. He ran up river and bounced around in some shallow-water spots and wound up getting a few bites on a wacky-rigged worm. He's up to 10 pounds. It's not a great day, but he's in good shape to make the cut and fish tomorrow.

Not much else has changed at the top of the leaderboard. Reyes is just a few pounds back of Wheeler, but they'll be very close once Wheeler's penalty is applied.

Alex Davis had a heartbreaking moment this morning when a bass that he estimated to weigh about 8 pounds missed his topwater. The Alabama pro shook it off and got back to work, and has recently gone on a tear, making multiple culls. We have his weight currently at 15, but there was some confusion in the reporting, and he could have more than 17. That puts Davis in the top 10.

The mayfly pattern is still good, but we haven't seen any giants come off that pattern in quite some time. The offshore and grass bass are definitely the biggest and most consistent fish. Whether the grass and mayfly patterns can hold for another day we can't say, but it should be very fun to find out tomorrow. 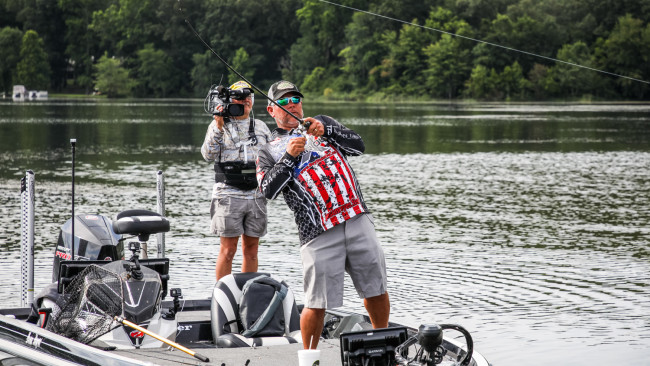 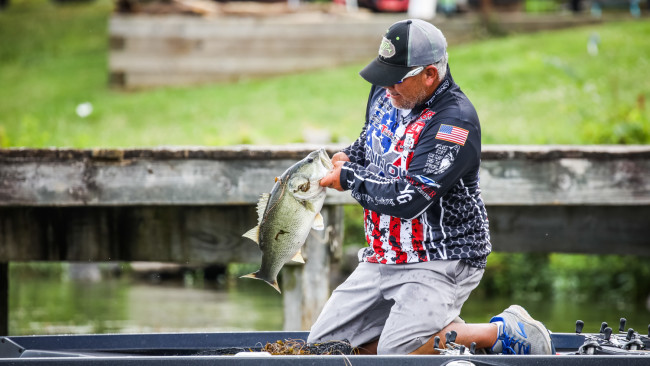 The Chickamauga Big Fish Parade is back in Dayton today! Jason Reyes caught "the one" just moments ago, and it's gonna weigh 6 or 6 1/2 pounds. It's a tank. He's right back in the thick of it with Jacob Wheeler, who's near-10-pounder this morning propelled him way out in front.

Wowzer, this is one of the best FLW Live shows we've had in a long time. You'd better log on and watch this slugfest go down. 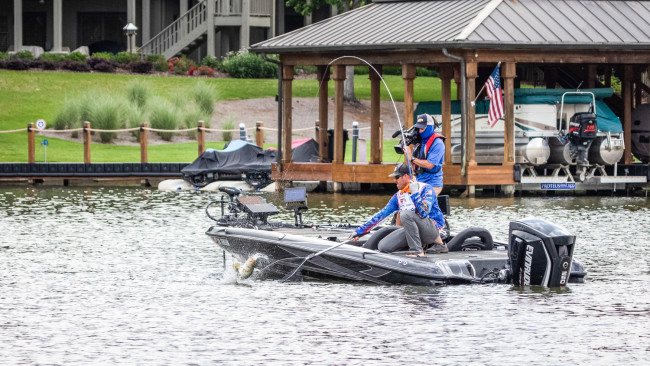 Just when it looked like Floyd and Reyes were going to make a run at catching Wheeler, the leader stuck another nice keeper and upgraded by a pound and a half. He's cruising now with an 8-pound lead and plenty of time left to try and upgrade again. 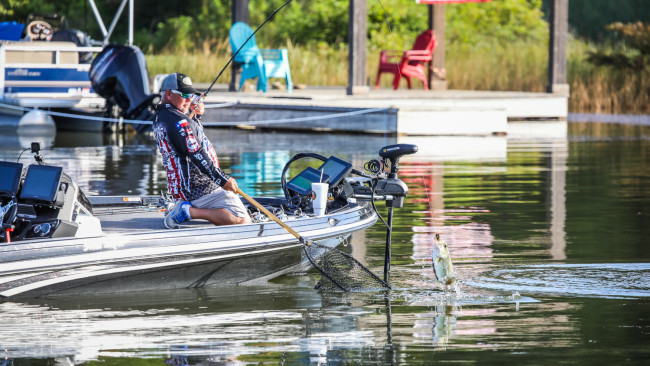 "Little scrapes" is how Jason Reyes describes the kind of flurry of activity that occurs when a school of bass fires up and multiple fish bite. He just experienced a scrape that has him back in the hunt. Reyes landed about a 3-pounder to fill his limit, then on the next cast was able to make his first cull. He's up to 12 pounds on the day and less than 7 pounds behind Wheeler's overall weight.

If Cole Floyd can't catch Jacob Wheeler, it won't be because he isn't catching enough fish. He's been setting and swinging all morning. A recent 4-pounder boosted him up to 18-4, and now unofficially 6 1/2 pounds behind Wheeler. Once Wheeler's penalty is enforced, Floyd will be just 4 1/2 back. 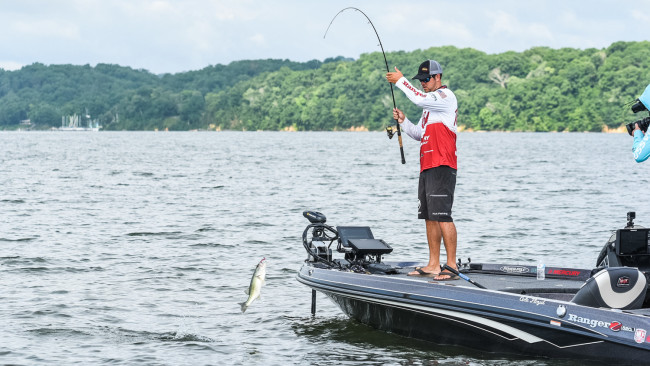 Cole Floyd added a nice keeper to his limit just a moment ago. We didn't get a great look at it, but we're hoping for an update from his cameraman. We're currently calling his weight at 16 1/2 pounds, which has him a pound closer to Wheeler.

10:15 – Wheeler still leads, but Floyd trying to close the gap

Jacob Wheeler is sitting comfortably atop the leaderboard, thanks in large part to a massive 9-plus-pounder he caught earlier this morning. Cole Floyd, in second, is up to 15 1/2 pounds, which is still about 9 pounds back of Wheeler. The one catch is that Wheeler will be assessed a 2-pound penalty for making a cast with six fish in his livewell. It was an honest mistake. He got caught up in the excitment of a school of bass firing up, dropped a bass in his livewell and simply forgot to cull. He made only one cast and did not catch a fish, but it'll still cost him. If Floyd can put together another 20-pound day, he'll be within reach of Wheeler.

The ledge pattern and mayfly pattern are the hottest bites on the lake today. We all know about ledge fishing, but mayfly patterns often get more attention up north, when epic hatches occur on Midwestern fisheries. One of our on-the-water reporters said the hatch happening on Chickamauga right now actually reminds him of a Lake Erie mayfly hatch, so that's how heavy it is in east Tennessee this week.

Miles Burghoff is catching bass on bluff banks, where bass are eating bluegills and other small fish that are feeding on the bugs. Dakota Ebare has taken a different approach. He casts he jig into an overhanging branch, gives it a shake to jar the bugs loose from the limbs and onto the surface of the water, then capitalizes on the ensuing frenzy. Each time he does it, the bluegills erupt on the bugs. It's a pretty sweet deal that we'll be detailing on the FLW website after the tournament.

Jacob Wheeler just launched himself way out in front with a huge bass that weighs more than 9 pounds. His limit is now 22 pounds, which puts Wheeler about 12 pounds ahead of Jason Reyes in second place. Wheeler has hours to try and upgrade into the mid-20s, and if he does, he might be uncatchable tomorrow. Watch out, because the best angler in the world is trying to put this one away already. 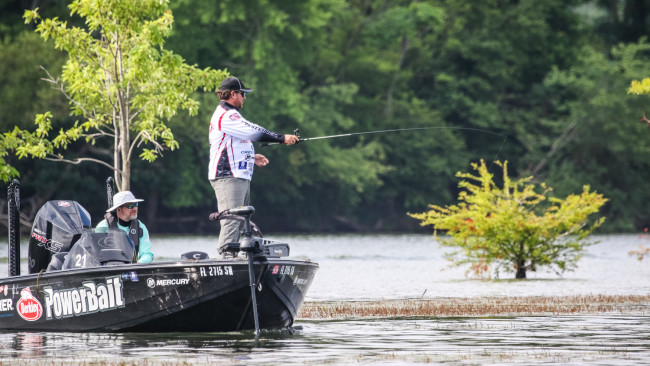 Reyes and John Cox are the two top shallow-water fishermen in this derby, and they're both having slow mornings. Reyes had a 7-pounder yesterday by this time. Cox hasn't caught a keeper. They'll both probably get it dialed in at some point today, but it sure seems like the offshore bite is heating up. Reducing the field from 204 to 50 today certainly helps the offshore anglers because it lets them get on the best ledges when they want and stay in a good rotation. 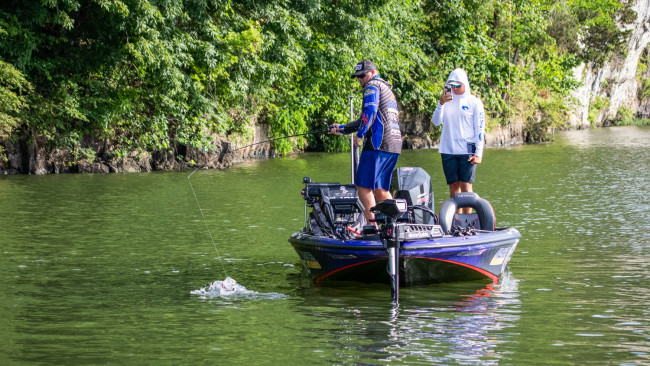 Yesterday, Miles Burghoff figured out a mayfly hatch pattern that helped him get into the top-50 cut. This morning, with 18 pounds already in the livewell, it looks like Burghoff has fully dialed in this mayfly program. He's mostly targeting fish along bluff banks, where the mayflies fall into the water and start a feeding frenzy of smaller forage fish, which the bass are eating. It's a sweet little deal, and it's effective, as you can tell by the leaderboard. 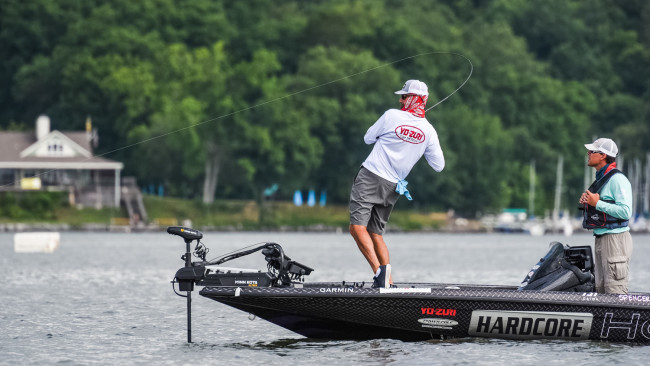 8:20 – Burghoff surges, Wheeler back in front

Miles Burghoff managed to "ignite" one of these Tennessee River schools of bass and was able to get well in a hurry. He caught four keepers over 3 pounds in a matter of just a few minutes and now has more than 18 pounds in the livewell. That moves Burghoff up into the top five.

Back at the top of the leaderboard is Jacob Wheeler, who led off the tournament with a first-place performance on day one. Wheeler has 14 pounds and change this morning, giving him a 4-pound cushion over yesterday's leader, Jason Reyes. 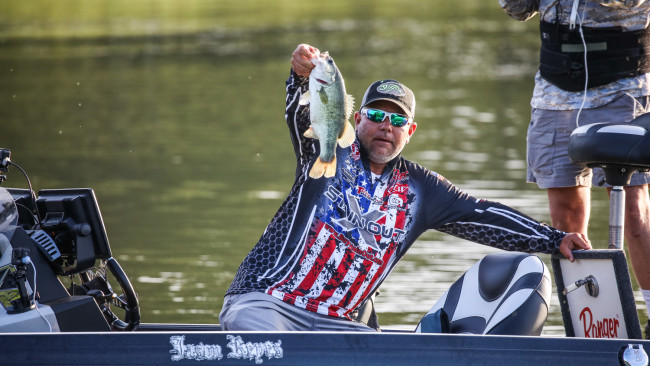 Head over the FLW homepage to join us for another exciting day of FLW Live with hosts Travis Moran, Todd Hollowell and Marty Stone. 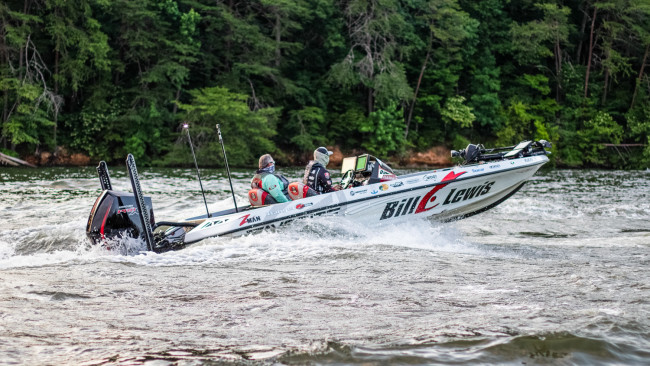 Mark Daniels Jr. was the first pro to reach a limit this morning. He has about 14 pounds, 12 ounces, but three other pros have joined him. Cole Floyd and Jesse Wiggins have five apiece.

So far this morning we've seen a lot of ChatterBait action around offshore grass, as well as soft plastics and even some flipping. 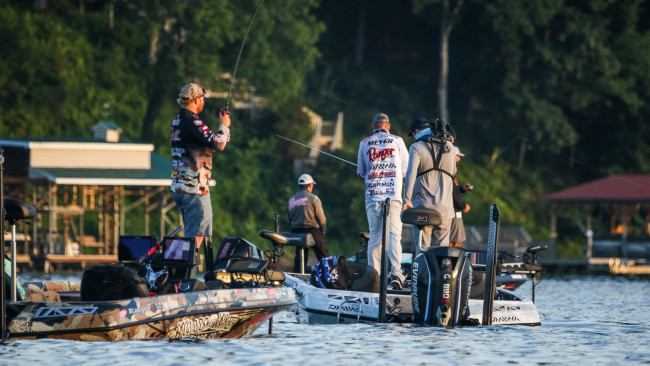 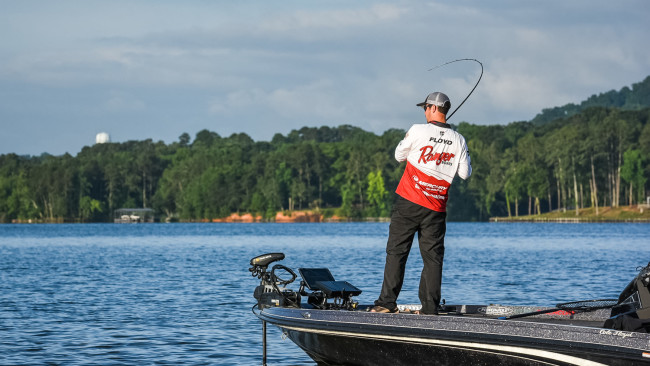 If you want to see updates on all of the top 50 pros, the best option right now is to check out the Live Leaderboard until the FLW Live show begins at 8 a.m. ET. The leaderboard updates regularly. So far, Jesse Wiggins has had the hot hand. He already has four bass in the boat, but they aren't real big. He has a little over 8 pounds. Mark Daniels Jr. has the first kicker in the boat. His fish No. 1 was a 5-pounder.

We caught up with Spencer Shuffield, Cody Meyer and Josh Weaver, all fishing the same spot outside Sale Creek. They're catching fish, though not all keepers. Jason Reyes started his morning fishing shallow grass and has a small keeper in the boat. Barry Wilson has three keepers for about 7 pounds, 12 ounces.

Andy Morgan checked in the day's first keeper. It's a 2-pounder. Nothing big, but that's a start. 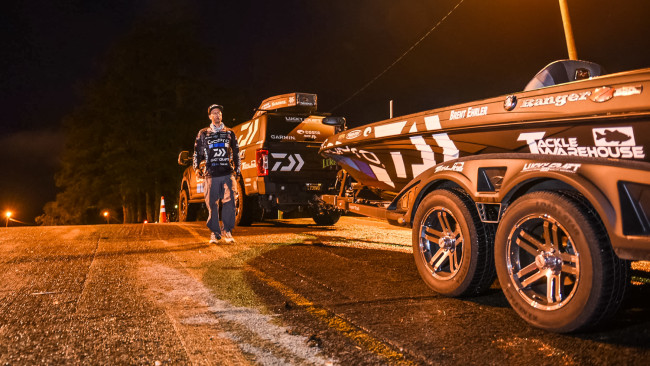 Jason Reyes smoked 'em on Wednseday to the tune of 27 pounds, 4 ounces to take over the lead at the Tackle Warehouse Pro Circuit Super Tournament on Lake Chickamauga. He was the first boat out from the Dayton Boat Dock this morning, leading the way for the top 50 anglers as they vie for the top 10 and the chance to fish tomorrow.

Reyes wasn't the only hammer to come out swining yesterday. Jacob Wheeler caught 22-1 to make the cut in second, and Cole Floyd smashed 26-2 to jump up into third. There was a total of 11 limits of more than 20 pounds and a whole slew of limits of 16 pounds or more. Lake Chickamauga has been showing out this week.

Though ledge fishing is certainly one of the go-to patterns among the top anglers, it's not the only way to get paid. Reyes caught most of his fish in the grass. There's a mayfly pattern on the bank that has produced some really big fish. The frog bite is on at times. And plenty of good fish have come off docks and other shallow targets where bass are foraging for bluegills.

It should be a stellar day for FLW Live, which kicks off at 8 a.m. ET. Join us to see who can make the final cut to fish in the top 10 tomorrow.

Wind: slight but forecast to build to 5 mph out of the WNW