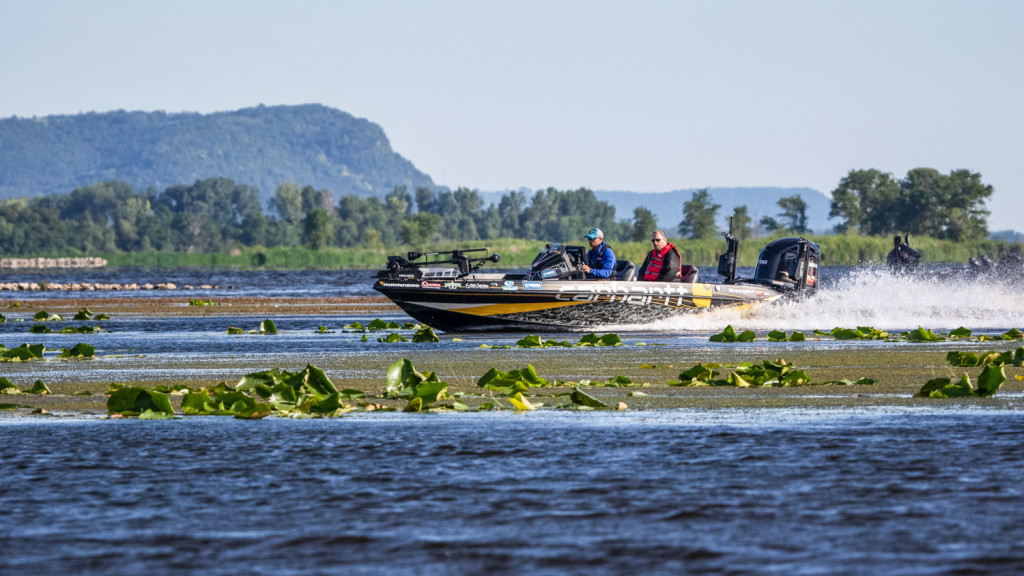 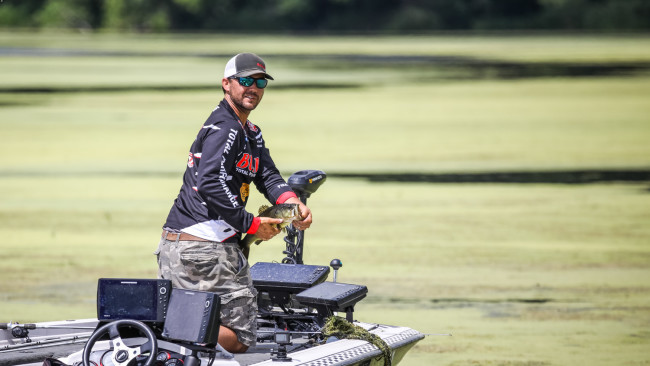 That’ll do it for live blog coverage and leaderboard updates. FLW Live is off the air and weigh-in starts in just one hour.

As things stand right now, Tyler Stewart is still in the unofficial lead, but he hasn’t upgraded in quite a while. With about 15 pounds, it’s going to be hard for Stewart to find a kicker capable of increasing his limit.

Since our last update, Matt Lee has tacked on some cull fish to increase his day two total to 12 3/4 pounds. He still has a little room to upgrade, and if he does, it might be enough to overtake Stewart and take a lead into moving day.

Nearly a third of the anglers we have reports for today have at least 10 pounds in their livewells. That’s a pretty substantial number considering how tough the fishing has been so far in this event. That also means weights are going to be stacked once again and making the cut (or a check) could come down to ounces.

To see how it all shakes out, tune in for the live weigh-in show starting at 3:30 CT. Thanks for following along. 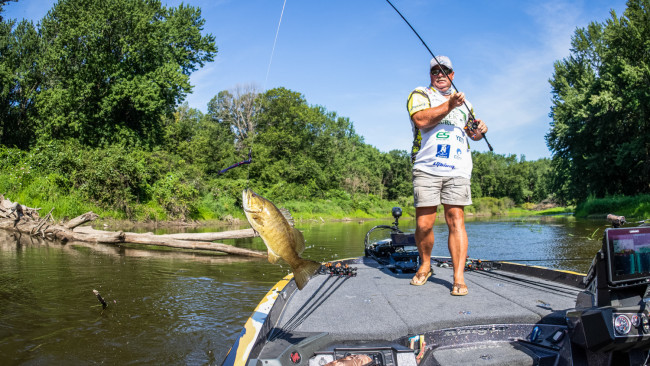 Even if it’s not fishing to normal standards, the Mississippi is churning out some solid bags today. Where only nine pros weighed in 14 pounds or better yesterday, we’ve already seen three such stringers today with only half the field reporting and plenty of time left to fish.

That’s due in part to the weather, which has been possibly more pleasant than on day one. Clouds have rolled in and there’s some breeze, which has fish positioned better for some pros and worse for others. In any case, it seems to be firing up the right fish for a bunch of pros.

Kyle Hall continues to catch them today. He’s up over 14 pounds after culling his way up from a pretty solid limit to start the day. Likewise for Bailey Boutries, who has about 13 pounds right now. Tyler Stewart remains in the unofficial lead with about 15 pounds for the day.

Bradford Beavers is someone to watch out for right now. He weighed in 14-2 yesterday and has another 10 pounds today. If he manages to cull up even a little, he’s a lock for the top 10 heading into moving day.

FLW Live will be on the air for about 20 more minutes. Be sure to tune in to see what happens for the pros atop the leaderboard.

As is often the case on the Mississippi – especially this stretch of the river – barge traffic might be throwing a wrench in the plans of some pros today. Erik Luzak is trying to lock back through to Pool 8 and was told by the lockmaster that he’ll have to wait at least two hours for a barge to come through, with another barge queueing up. It’ll be interesting to see who else needs to get through the lock to make check-in on time.

Not much has changed at the top of the leaderboard recently. We seem to be in the midst of a small lull, but anglers have commented that things picked back up yesterday around 2 o’clock or later. For pros with late draws today, that could be the window to make some big upgrades. 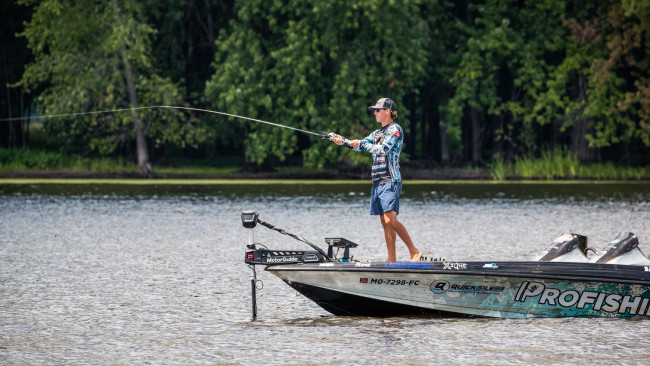 Consistency is key and Bailey Boutries is proof positive. After weighing in 13-12 yesterday, he’s up over 13 again today with a 4-pound kicker in his livewell. That means he has some smaller fish he can still cull out, which is bad news for the anglers right behind him. Boutries currently and unofficially sits in second place.

Scott Wiley with his 10 pounds is still hanging around the top of the leaderboard. He’s back in Pool 8 and you can watch him on FLW Live right now as he chases some upgrades.

Todd Faircloth didn’t have the best day yesterday (7-9 for three fish), but he’s roaring back this afternoon. He has a limit of 13 1/4 after consistently culling throughout the morning. Similarly, David Williams only weighed in 8 pounds yesterday and has about 12 1/2 today. Williams is fresh off a strong top-10 showing at Chickamauga last month.

Tyler Stewart hasn’t upgraded, but he’s still got 15 pounds and the unofficial lead. We may be seeing him on FLW Live pretty soon. 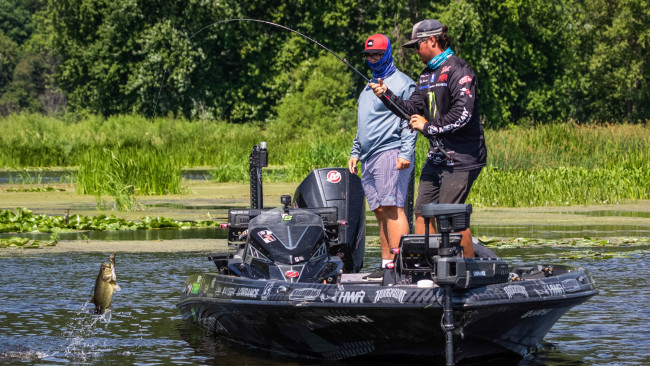 Tyler Stewart has culled again and is up around 15 pounds for the day. He’s been frogging a “juicy” spot on Pool 8 that’s clearly producing. With several hours left to fish, Stewart will have to decide if he wants to keep hammering on them to up his limit or lay off and save some fish for tomorrow. He probably even has some time to find some new water to run if he needs it later on.

We have 14 bags over 10 pounds right now with several more nearing that mark. Even if the numbers aren’t up to usual Mississippi River standards, the quality is right around where you’d expect for this time of year.

Day one leader Scott Wiley, while he’s been relatively quiet today, is in pretty good shape. He’s got 9 pounds after totaling 15-3 yesterday and he has a lot of room in his bag to keep making moves.

Darrell Davis has self-reported three times today, this time saying he has 13 pounds. He’s making quality culls each time and is around some really good fish. 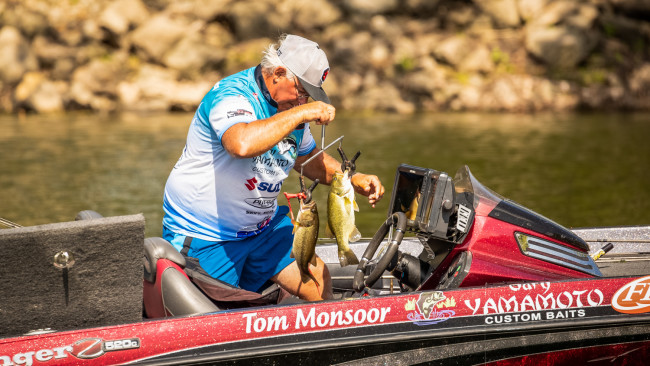 We saw Tyler Stewart get off to a hot start yesterday before leveling off a bit. If he does the same today, he’s still going to be in great shape, because he has about 14 1/2 pounds. That moves him into the unofficial lead.

Tom Monsoor, similarly, is having another good day today. Consistency is going to be key this week with kickers being so hard to find, and the Mississippi River veteran certainly knows that. He’s almost certainly slinging around a swim jig, as he’s so well known for doing.

We have reports of 15 limits so far. That’s a tick ahead of the pace yesterday. The fishing definitely seems to be a little better as the weather remains pretty stable and anglers have had a little more time to fish today.

Tommy Dickerson might have big fish locked up already. He just landed a 5-pounder to bring his total to 12 pounds.

AOY leader Ron Nelson is unofficially in the lead after culling up to close to 11 pounds on the day. He wants to cull out every fish in the box by the end of the day, but for now, he’s off to a great start. Making the cut this week all but guarantees he takes a huge lead with him to Lake Erie to close out the season.

Jacob Wheeler is finally on the board. It wasn’t a big one (maybe 1 1/2 pounds), but it’s a start for the No. 1 bass angler in the world. He didn’t hammer them early yesterday, either, so expect Wheeler to start really chipping away at his limit as the day goes on.

Once again, frogs are the dominant weapon of choice for a huge portion of the field today. As it starts to heat up, we may see some more finesse tactics come into play, but for now, it’s all about the frogs.

Day one leader Scott Wiley has a small limit around 9 pounds. He’s unofficially in second, but he’s looking at making the cut regardless of what he does the rest of the day. A 15-3 bag on the Mississippi will do that for you.

Elsewhere, Casey Ashley has followed up a solid day one with a limit of his own today. He has about 10 1/2 for a 24-3 two-day total. 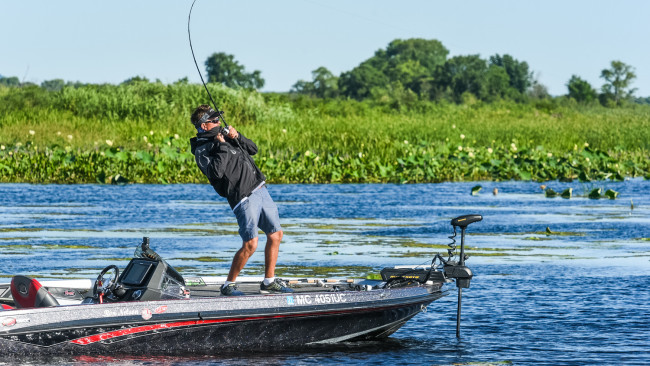 Darrell Davis, after catching a solid limit early yesterday, has another good stringer going today. He has 11 pounds with a ton of time left to fish today. He’ll be hunting for kickers until it’s time to check in. Right now, he’s unofficially in the lead.

Kyle Hall and Ron Nelson both have limits, though Hall’s is probably 4 or 5 pounds heavier than Nelson’s. David Walker also has a limit and has culled once. He’s sitting with 9-plus in his livewell.

That’s about it for reported limits, but day one leader Scott Wiley does have three fish for about 6 pounds. He really just needs to fill out a limit to be in good shape to fish tomorrow. If those couple limit fish are also kickers, he stands a good chance to keep his lead.

Things have been pretty steady since anglers got through the locks this morning. We haven’t seen many limits yet, but there are a couple quality bags to mention, the biggest of which belongs to Kyle Hall. He’s got about 10 pounds already. Behind him, Kurt Mitchell has a two-pound average – four fish for 8 pounds.

Ron Nelson continues to do what he does. The odds-on AOY favorite had a great day one and he’s already got four small ones in the box. It’s looking less and less likely that anyone is going to catch last year’s Polaris Rookie of the Year and potentially this year’s Angler of the Year.

Tyler Stewart got off to a great start yesterday and he’s back to it this morning. He has almost 9 pounds on just three keepers so far. A couple more like that and he’s going to be in great shape to not only fish tomorrow but possibly Saturday as well. 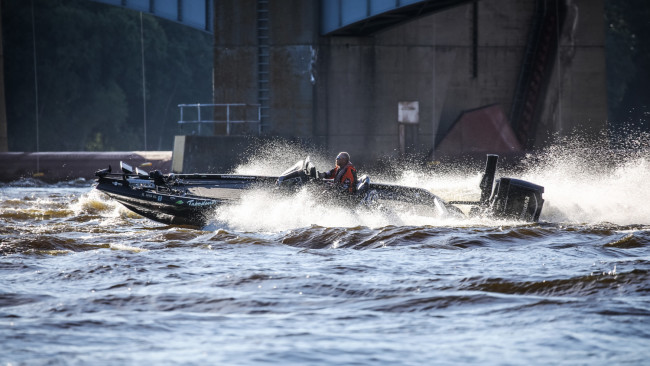 Pool 7 is the place to be today, as on-the-water reporters say “a ton more” pros locked up. There’s a good chance fewer pros made that particular trip yesterday because of the fog delay, but it’s interesting, nonetheless. Perhaps Pool 7 will hold some answers for making the top-50 cut heading into Friday.

There haven’t been as many fish catch reports as expected to this point, but again, it sounds like more of the field locked into Pools 7 or 9 and are just getting to their starting spots. We should be getting plenty of updates soon enough.

Anglers who decided to stay put in Pool 8 are already getting after it this morning. Scott Dobson (3 pounds) has two in the box and Todd Faircloth (6 1/4) has three. Faircloth’s have all come in the last five minutes or so, so he’s clearly on something decent.

Pros who are locking into Pools 7 and 9 this morning are going to be the real litmus test for what the morning bite has to offer. Those anglers missed the early morning window yesterday, so we’ll see what the extra 90 minutes does for them, assuming they get through the locks fairly quickly. 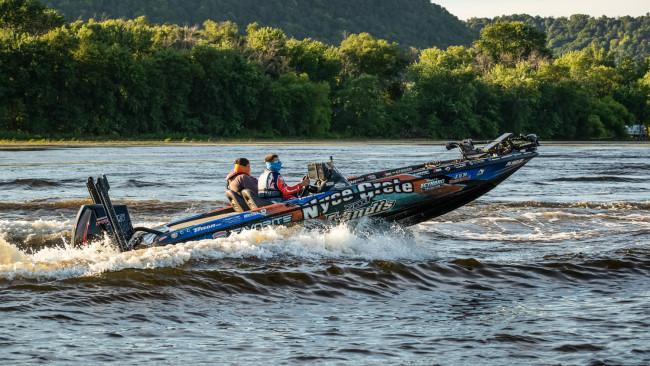 It’s day two on the Mighty Mississippi and thankfully this one will get started on time. Yesterday’s fog delay slowed some pros down a bit and essentially shot the early morning bite some were able to find during practice. Today, that shouldn’t be nearly as much of an issue.

Even with the delay on day one, though, weights were about what we expected to see – even better, perhaps, considering several pros brought more weight to the weigh-in stage than was reported before the live blog and leaderboard shut down for the day.

With an extra hour-plus of fishing time anglers didn’t get yesterday along with another day’s worth of information and experience, it should be another strong day of fishing. Follow along here all day and be sure to tune in to FLW Live starting at 8 a.m. CT on flwfishing.com.