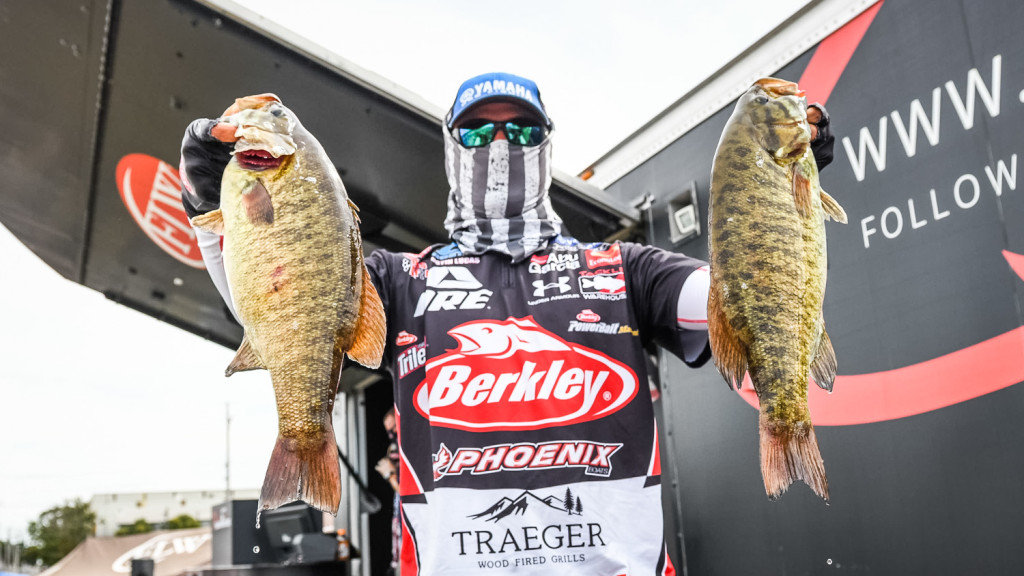 He thought he had the lead yesterday. Turns out, Justin Lucas just needed to wait a day. Either way, the Alabama pro is dialed in when it comes to smallmouth.

“I think probably about three years ago I really started understanding them (smallmouth),” says Lucas. “I have a lot of confidence when we come up here in the summer.”

After winning the Major League Fishing Bass Pro Tour event on Sturgeon Bay just a couple weeks ago, Lucas has further showcased that smallmouth confidence here at the Tackle Warehouse Pro Circuit Super Tournament on Lake Erie. His 19-pound, 14-ounce bag today pushed him into the top spot with 41-5 for the event, a mere 3 ounces over Jeremy Lawyer.

Yet, things are liable to get very interesting the final two days.

For starters, Lucas, Lawyer, day-one leader Josh Bertrand (fourth), Todd Faircloth (seventh) and a handful of other pros that made the cut are all fishing the same general area around Gull Island Shoal. In fact, five of yesterday’s top 10 started within 75 yards of one another this morning. Considering none of them are getting many bites – Lucas says he only had seven bites and landed just the five he weighed in – many are worried that area could get too much pressure and fizzle out.

Meanwhile, calmer conditions allowed the guys making the run to Lake St. Clair to do so in a little over an hour today as opposed to two hours on Tuesday. The result was some of the bigger bags of the event, with Alton Jones, Jr. (third) and Spencer Shuffield (fifth) both cracking over 20 pounds today to push into the top five, and they’re doing it by catching dozens of fish. To really showcase how well St. Clair fished today, you just had to look at Jon Canada. He didn’t make the run yesterday and caught 8 pounds. Today, he cracked the biggest bag of the event at 24-8 to make the cut. 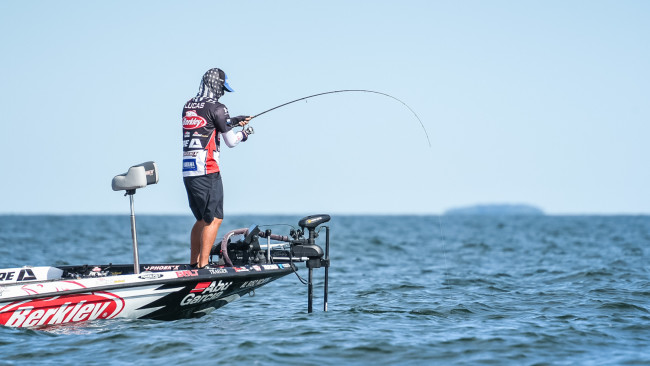 That could set up a showdown between the Erie and St. Clair pros … assuming the St. Clair guys can make it there tomorrow. With forecasted blustery conditions out of the northeast tomorrow afternoon, it could once again make the long run treacherous (assuming the entire field is allowed to leave Sandusky Bay). And even for pros like Lucas in Erie, the added wind and waves is going to hurt.

“I’m going out if we’re allowed to go on the lake, for sure,” says Lucas. “If we’re not, I’ll have to change up. The fish don’t mind the wind, but it’s tough to present the bait correctly in the wind. You don’t have enough time to see them on the graph and fish effectively. You’re looking for those smallmouth that are up on top of a rock, or come up on your graph checking out your boat. Active smallmouth that are ready to feed. They’re hard to find, but there are a few out there willing to eat a Berkley PowerBait MaxScent Flat Worm on a drop-shot.

“But I don’t really have a backup plan. I’m all in on that. I do have one other area I haven’t hit yet, but I don’t think the fish are as big there. I think 18 pounds would be a good bag there. But I still think 20 pounds a day will win this thing.” 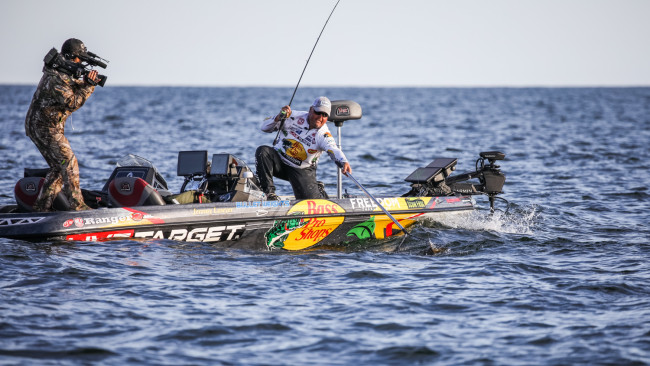 His goal for the day was simply to catch one good smallmouth to make a check and punch his ticket to the Tackle Warehouse Pro Circuit TITLE presented by Toyota. Lawyer did both and a lot more.

“A check and make the championship – that’s all I wanted to do,” says Lawyer, who brought in 20-4 today. “So I’m ecstatic. I could go home right now and feel good.”

Well, he won’t be going home yet, and with what he has going, he may not be until after Friday.

As mentioned earlier, he started on the same spot as numerous other top pros first thing this morning, but after catching only one smallmouth, he decided to hit other areas on the same shoal, with not much to show for it. Finally, he made a bit of a run to a spot where he “couldn’t see another boat in any direction,” and got right in a hurry.

Like many of the other pros, Lawyer is pitching his drop-shot to smallmouth he’s seeing on his Garmin Panoptix LiveScope, but the fact that he has a new area all to himself and a few more that are similar but that he hasn’t touched has him most excited.

“I’m not married to any place, which is the best feeling,” says Lawyer. “I’ve only fished two of the six areas. So if the wind allows I may hit more of them tomorrow.” 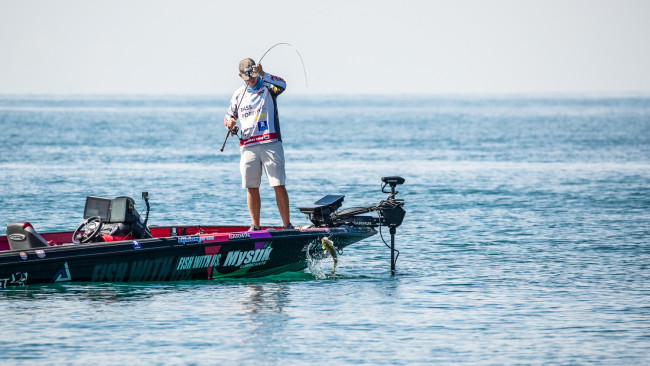 While the Erie guys are scraping to get even a handful of bites, Jones Jr. and the St. Clair pros caught them at will today.

“I had my entire weight in an hour,” says Jones Jr. “And every fish I weighed in I caught looking at them with my Garmin Panoptix LiveScope. I’m not looking at the horizon or anything else; just staring down at my LiveScope looking at fish. There were guys around me who didn’t have that and struggled while I was catching fish every five minutes.”

Speaking of time, that’s going to be a big factor for him and the other St. Clair pros tomorrow, especially if the wind blows hard.

“I’m going to get to the Bass Islands and do the math,” says Jones Jr. “If I see the waves and figure I can still get to St. Clair with enough time to fish for two hours, I’m going. If I can’t, then I probably won’t go.” 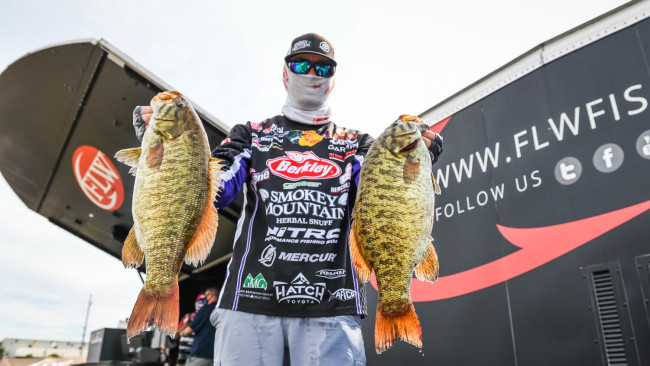 When you’re not getting many bites on your main area to begin with and then you see a few more boats on that area today than yesterday, it’s probably not going to go well. It didn’t for Bertrand.

“I caught zero fish there,” says Bertrand of his starting spot around Gull Island Shoal. “I kind of had an uphill battle from there. Just plucked one here. Plucked one there. I only caught seven fish again, but only two big bites.”

Fortunately, with the lighter waves, Bertrand was able to run 12-15 spots looking for “something that wasn’t getting pressured.”

“There are not many shoals and pieces of structure that guys are not already fishing,” says Bertrand, who plans to stay in Erie for the rest of the event. “Then you look right across the border, and there’s tons of structure and schools of smallmouth. So we’re making the most of what we’ve got.” 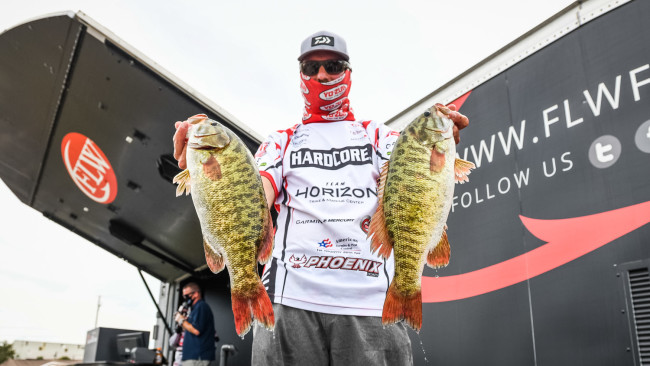 After he and many others got their “brains beat out yesterday” making the run to St. Clair, there were more than a handful of pros that turned around today with some initial wave action. Shuffield wasn’t one of them, and he was rewarded handsomely.

“Once you got out past the islands it was silky smooth all the way to St. Clair,” says Shuffield. “I didn’t have anything to lose. I know I can catch them when I get there. I figure I can get a minimum of 15 pounds even with 45 minutes to fish. And if you have three or more hours to fish like I did today you can get a pretty big sack.”

Shuffield was catching fish at will “sight-fishing” with his Garmin Panoptix LiveScope. The key was finding taller clumps of grass in the right depth range. Once he had that – he has numerous areas like it – he can catch one just about every time he casts out.

Now, the question is will he make the run again tomorrow if it’s rough?

“I’m going to make the run as long as I feel I can have 45 minutes to fish, but I’m not going to tear up all my stuff to do it either,” says Shuffield.