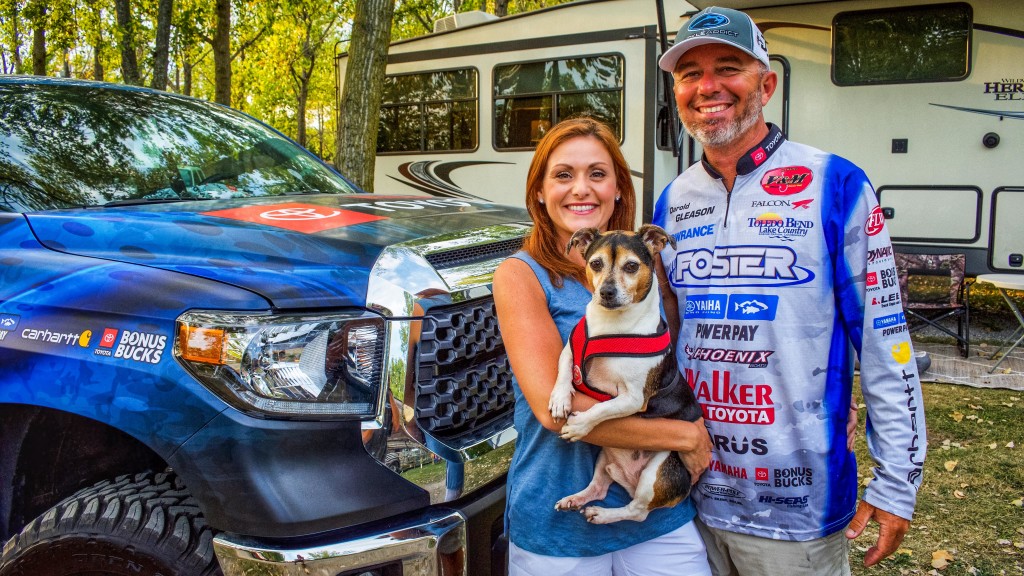 I was leaving the Shelby Street boat launch at the conclusion of takeoff for day one of the final Tackle Warehouse Pro Circuit Super Tournament of the year when I saw Randi Gleason pulling out of the parking lot.

Randi’s husband is Darold Gleason, a Pro Circuit rookie and one of several anglers who came to Lake Erie on the bubble to make the Tackle Warehouse TITLE presented by Toyota. Only the top 50 pros in the points standings qualify.

I’m not sure she’d admit it, but I’m fairly certain Randi was already checking the FLW Live leaderboard when I saw her, just ten minutes after boats had launched. The Gleasons pull no punches when it comes to their steadfast support of one another or their enthusiasm for competitive fishing.

“Say a prayer for five nice ones if you would,” Randi says emphatically. “He’s got to catch them so we can keep this thing going; we don’t want the party to end!”

The party Randi refers to is traveling around the country together for Darold’s professional fishing career. A full-time professional bass fishing gig is something both Gleasons have dreamed of for years.

Darold has been a part of the fishing industry for over a decade. He’s a legendary guide on Toledo Bend and a field staff staple for Toyota Bonus Bucks, Carhartt, and Yamaha Power Pay, as well as a talented regional competitor and one of the good dudes of the sport.

So, when Gleason qualified for the FLW Pro Circuit at the end of 2019, they knew what they were getting into. And they were all-in.

Their 2020 season began on a high note, with great finishes at Sam Rayburn and the Harris Chain. Randi and their pup “Rowdy” enthusiastically traveled with Darold, and it seemed their dream season was off to the races, at least until 2020 decided to throw a wrench in everyone’s plans.

The struggles began with a less-than-optimal performance at Lake Martin for Gleason, who credited bad decision-making en route to a triple-digit finish. What followed was a global pandemic that essentially shut the world down and redefined the Gleasons’ “new normal,” as Randi is a cystic fibrosis patient.

Cystic fibrosis is the most common fatal genetic disease in the United States, and it puts patients at far greater risk when it comes to the effects of COVID-19. The Gleasons’ love for each other is so strong they couldn’t fathom finishing the 2020 season without being attached at the hip to one another.

So, days before the Lake Chickamauga Pro Circuit Super Tournament, they bought a fifth wheel trailer so Randi could travel to FLW tournaments safely and comfortably. Darold, a longtime Toyota Bonus Bucks participant, tows his Phoenix boat with the Tundra and Randi tows the fifth wheel with her brother’s borrowed truck.

Both Darold and Randi have hearts and personalities big enough to fill Lake Erie; throw their dog Rowdy in the mix and you start to understand why this life is a party for them and those who know them. 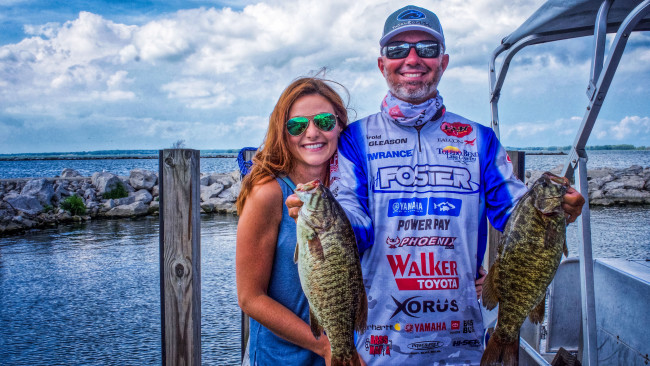 After another substandard finish at Lake Chickamauga and shooting about par on the Mississippi River, Gleason came into this event in 53rd place in the points race. And he’s certainly feeling the pressure to qualify for the Tackle Warehouse TITLE on Sturgeon Bay later this month.

“I’ve got my work cut out for me, but that’s indicative of my entire career,” Gleason said after day one. “I’m sure most of my peers feel the same way, but it never comes easy for me. I feel like I always have to out-work my competition. Either way, I’m grateful to have a chance to qualify this week.”

That pressure was only compounded by the fact that the Louisiana-born angler had never seen any of the Great Lakes, let alone fished them. To make matters worse he heard the whispers and dock talk of anglers saying they needed to make a 100-mile run to Lake St. Clair if they wanted to excel in this tournament.

“My poor brain was spinning in circles every night after practice,” Gleason joked. “Four days of practice sounds like a lot, but it doesn’t feel that way when trying to break down a Great Lake. I decided to maximize my fishing time and not make any long runs.”

Gleason’s decision proved fruitful after day one when he caught 16-plus pounds of Lake Erie smallmouth. His efforts had him sitting in 25th place, in perfect position to move up the standings and qualify for the TITLE. It seemed as if Randi’s supportive prayers came true.

But, of course, adversity reared its ugly head on day two.

Darold ran his Yamaha-powered Phoenix all over Lake Erie and left it all on the water, but he came back to weigh-in with just three keepers and a bruised spirit. The Gleason’s were doing math equations on the Sandusky boat dock and were certain their party had ended.

They were extremely disappointed but able to crack a smile when they realized Darold finished the event in 81stt place. It wasn’t the TITLE Championship, but a $10,000 check is a good consolation prize. When they returned to the campground, Randi couldn’t help but look at the standings and run some numbers.

Apparently, God had heard their prayers, as Darold still sat in 49th place in the points race at the conclusion of day two. Currently, he’s barely inside the top 50, but there are two anglers (Tim Frederick and Barron Adams) still competing on Lake Erie who could bump him out if they move up several places today.

The Gleasons’ party and dreams of more fishing in 2020 are still alive for at least one more anxiety-filled day. If Darold holds his current position, the Gleasons might have to fire up some Robert Earl Keen at the Sandusky campground – cause this party ain’t over just yet.