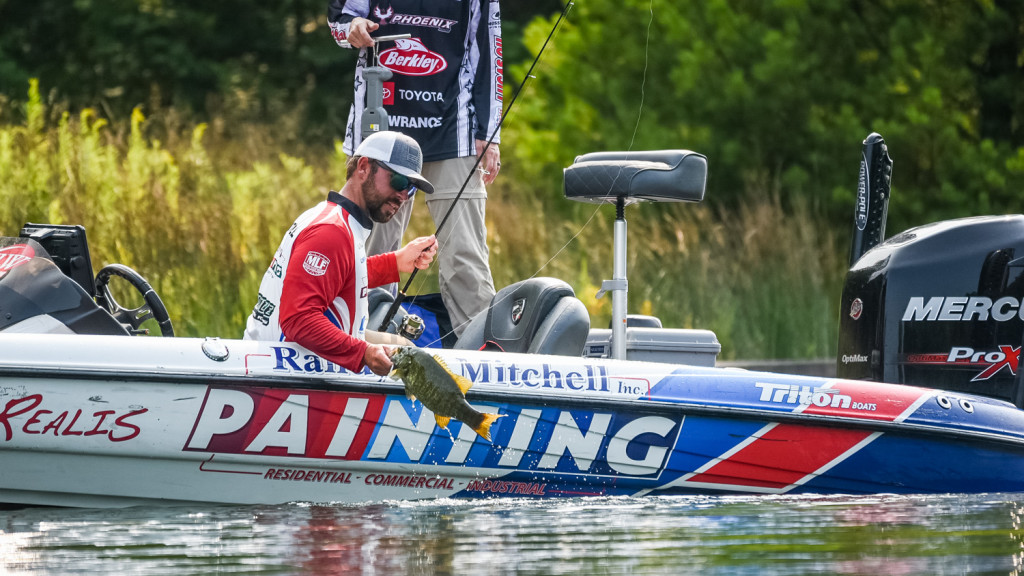 When it all comes down to it, tournament bass fishing is all about the numbers at the end of the day. And when you look at the digits next to Kurt Mitchell’s name after the first 7 ½ hours of the Tackle Warehouse TITLE presented by Toyota, even a casual fan can decipher that Mitchell had an astoundingly good day.

Mitchell’s line: 33 smallmouths for 119 pounds, 10 ounces and a monumental 56-pound cushion over the rest of the field after the very first MLF-style Qualifying Round in FLW history. To add to those numbers, Mitchell landed 10 fish that were 4 pounds or heavier, posted the day’s biggest fish (a 5-10 smallie) and finished the day with an average weight of 3-10.

“It was one of those days where everything just works out for you,” Mitchell says. “These are the days you just don’t ever have, really.”

In his first day of competition in the every-scorable-fish-counts format, Mitchell put together the kind of day that veterans of the format dream of: he started in an out-of-the-way spot and caught fish from the get-go. His first fish – a thick-bodied 5-10 smallmouth – came just nine minutes into the competition. Going from there, Mitchell caught fish regularly for two hours straight, alternating between a drop-shot with 4-inch Yamamoto Shad Shape Worm, and a Keitech Swing Impact FAT on a 3/8-ounce Dirty Jigs Matt Stefan Guppy Swimbait Head.

By the time Mitchell’s official called “lines out” at the end of the first 2 ½-hour period, the Lowrance pro had racked up 70-11 of smallies, one of the most prolific periods in the history of the MLF format (at all levels).

“I had no idea I was going catch that much,” says Mitchell, who is just four days removed from his first career FLW win (at the Toyota Series Northern Division event on Lake Erie. “I don’t know if I’ll even have to catch any more fish to get to the Knockout Round, or whether I’ll just try to protect my areas from other guys fishing them.” 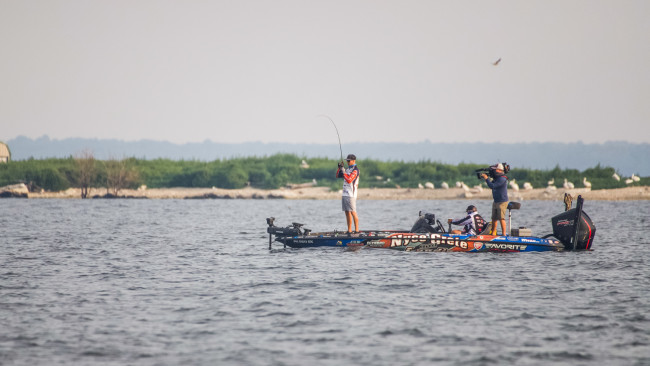 The standings immediately below Mitchell were a lot more tightly grouped, but no less compelling.

“It seemed like any one of the areas I had a group on, I’d get bit right away, but that’s all I could get to bite,” Buck says. “That group of 4-pounders that I got on top of, I was able to hit Anchor Lock and stay on top of them. They wouldn’t bite like that anywhere else. I feel like if I jump around, I get more bites, but every place I pulled up, I’d get one or two bites and then they’d just shut off.” 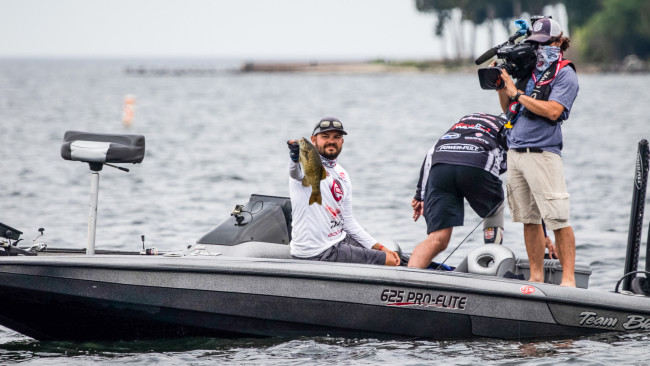 When Arkansas pro Evan Barnes arrived at his first spot of the morning, he had plans to stick there long enough to put 20 pounds on the board before he moved on to other spots. Unfortunately, his first five scorable fish only went 14 pounds, and Barnes had to adjust quickly.

He did exactly that, jumping to a new spot and catching 47-5 in the second and third periods.

“If I would’ve started on that spot, it could’ve been a pretty special day,” says Barnes, who mixed it up with various plastics on a drop-shot. “In practice, I was catching fish first thing in the morning and then moving on. But by the time we got started at 8 a.m., they had already stopped biting (in the first spot). There are literally hundreds of bass out there, if we can just have one of those days where these fish really, really bite, it’s going to be so good.” 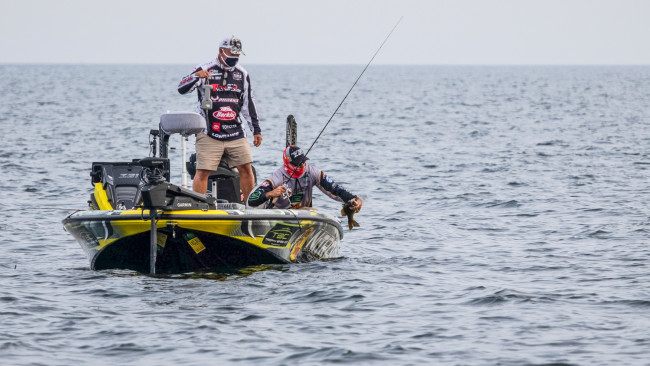 As one of only two anglers in the 50-man field (along with Scott Ashmore) with previous experience in the wide-open format, Casey Scanlon was pegged as an angler to watch this week. Scanlon was steady throughout the day, putting seven fish on SCORETRACKER in both the first and second periods drop-shotting in 30 feet of water, and finishing with five fish 4 pounds or heavier.

“I thought it would take about 30 pounds a day to advance, so I’m ahead of where I thought I needed to be,” Scanlon says. 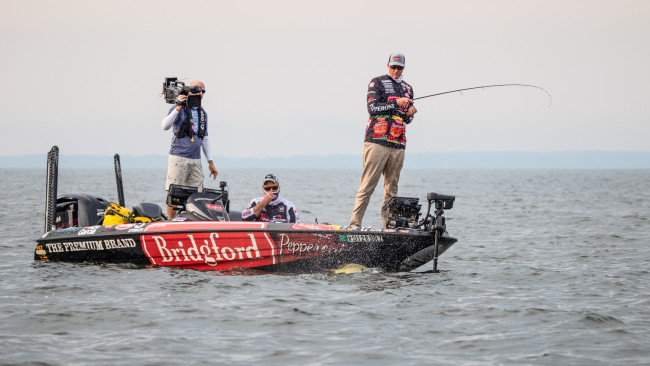 Before the start of the TITLE, Stefan was effusive about his excitement that the event had been moved from the St. Lawrence River to Sturgeon Bay. The Wisconsin native – who has fished here multiple times (although admittedly in the spring) – took a chance on a location that none of the other 24 competitors came within miles of.

“You have to change your strategy (in the format),” Stefan says. “I had a really tough practice, so I kind of went off the wall today. I started out on (Green Bay), caught a couple of nice smallies in the morning on the Berkley PowerBait MaxScent Flat Worm, and then headed up a river and went power fishing with a Dirty Jigs Swim Jig and Berkley PowerBait Power Swimmer and Berkley PowerBait The Deal. I wasn’t really prepared to go power fishing, it was something I stumbled on in the end of practice.”

The 25 anglers in Group B will get their first shot at Sturgeon Bay tomorrow with the start of that group’s first qualifying round. The forecast calls for a sunny, calm day on the big water, with a high in the high 70s and a mild wind forecast.

Watch all three periods of competition from day two of the TITLE via the FLW Live stream, which will be hosted at www.majorleaguefishing.com. Click on the WATCH NOW link in the blue bar at the top of the page.