Buck Stacks Up 21 Pounds, Leads After Day 1 on the James River 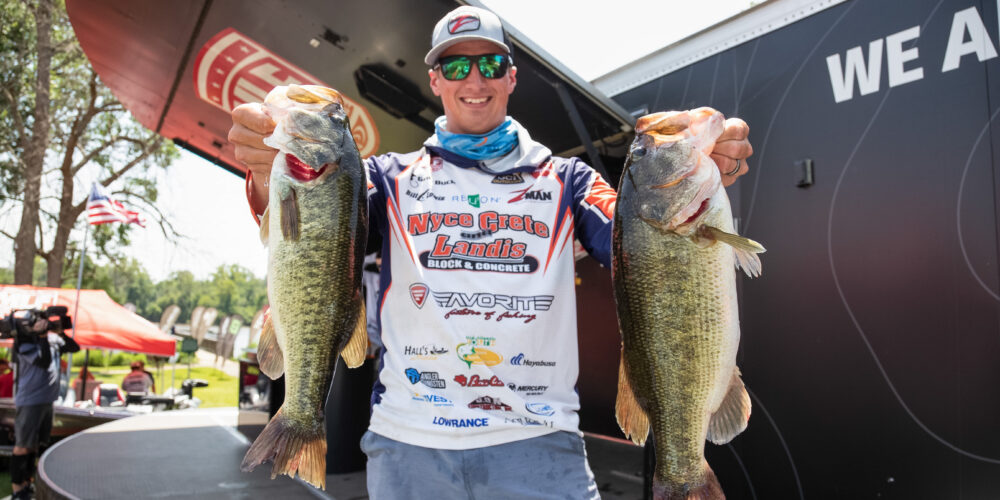 RICHMOND, Va. – To say that the kickoff to the Toyota Stop 5 Presented by PowerStop Brakes on the James River was a good one would be a massive understatement: it was exceptional.

All but one of the 154 pros brought a five-fish limit to the scales on Thursday at the Tackle Warehouse Pro Circuit Presented by Fuel Me event, headlined by Grae Buck with a 21-pound, 3-ounce bag. The Pennsylvania pro will take a 4-ounce lead over Dakota Ebare (20-15) going into Day 2, with Chris Groh (20-7) lurking in third and every angler in the Top 10 close behind with 18 pounds or more.

As one of the first few anglers to weigh fish, Buck staked his claim to the lead early in the weigh-in and left Osborne Landing after a banner day that had him feeling good about his start on the James. Catching fish wasn’t a surprise to Buck, but their size was.

“I found two good areas with plenty of fish in them during practice but never caught quality like this by any means,” said Buck, who caught 15 keepers on the day. “Fishing it all day, I got to see what lives there. Once I settled in, I was able to catch fish consistently all day.”

Buck is sharing his areas with other anglers. Although he was mum on how exactly he caught them, he believes there are more fish to be caught in his primary location. Understandably, timing and tide were crucial for him, as was his 6-6 kicker he caught midday.

“The tide played a big role in getting those fish to bite,” he said. “I have one area where I feel like I can catch a solid limit. Some other guys are fishing around me, but we should be able to work around each other and all still catch them. My big one came from another area, and I will have to look for more areas like that if I want a chance to repeat what I weighed today.”

While Ebare calls Brookeland, Texas, home, he grew up in south Louisiana and immediately felt comfortable on the James when he arrived for practice. Ebare’s 20-15 total included the day’s big bass, a 7-14 monster.

“It felt a little like home in how it sets up,” he said. “The tide swings are much bigger here than they are in Louisiana, but once I figured out where I needed to be and how the fish were setting up, I settled in and knew exactly what to look for. I was at the right place at the right time today and was able to start running the tide, which is the key to all tidal waters. It doesn’t matter what you are doing as much as where you’re doing it.”

Ebare acknowledged the boost he got from his big fish, but he’ll move forward on Day 2 looking for consistency.

“It was an all-around good day, and I’m thankful because I know you don’t get a big one like that every day,” he said. “I was happy I could catch some more solid fish to go with it, so I didn’t waste it. Historically on the James River, from what I’ve seen in past tournament results, consistency is the big thing, so I’m going into tomorrow as if I’m back to zero. On tidal fisheries, you can have 10 pounds as easily as you can have 20 because it’s all about timing.”

While the end result looks great, it didn’t start out well for Groh. His weigh-in slip reads 20-7, but it didn’t happen immediately out of the gate for the Illinois pro, and required return runs at a handful of his best spots.

“I started where I had some really, really good bites in practice, but the tide wasn’t quite right,” Groh said. “I slid to where the tide was better and was able to get my first limit, but it only weighed 7 pounds. I knew when the tide went slack, they wouldn’t bite at all there, so I left. When the tide came back in, I went over the same spots I was catching small fish and they were all good ones. My best fish came right when the tide turned from slack to incoming.”

Groh caught all of his fish on a white Berkley PowerBait Buzz’n Speed Toad paired with a Berkley Fusion19 Weighted Frog Hook.

Groh feels good about his chances on Friday.

“I checked some other spots for tomorrow and caught some that I probably shouldn’t have,” he said. “I feel confident that I’ll catch fish tomorrow, it just might not be 20 pounds again.”