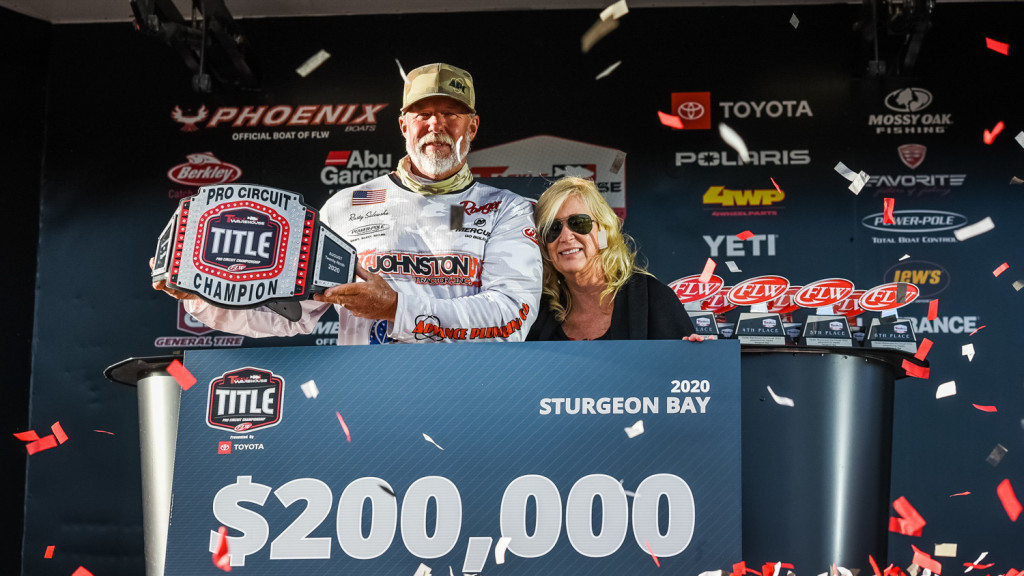 From time to time, MLF checks in with its anglers to find out what they’ve been up to, what they’re listening to, who they’re following and where they’re heading while out on the tournament trail. This week, we caught up with California pro Rusty Salewske.

So, what have you been up to since getting home from your Tackle Warehouse TITLE win on Sturgeon Bay?
Well, I ordered a new a boat and got that out of the way. Other than that, I’ve been doing a lot of honey-dos around the house. I built a playhouse for my grandkids that my wife wanted me to make. Though, I’m not much of a carpenter, so I’m still kinda working on it. But it rained the other day and it didn’t leak so that’s exciting for me.

Has it finally sunk in that you won the TITLE?
I don’t know if it ever feels real. I’d consider myself average – I’m no KVD or Wheeler – so to win the TITLE is special. You don’t know if you’ll ever win something like that. I’ve accepted that I won, but it’s still amazing.

The 2021 Tackle Warehouse Pro Circuit presented by Bad Boy Mowers season is about a month away. You ready?
Well, the boat was supposed to be here by Christmas, but I’m still waiting for it to show up. So, I’m not ready in that sense because I’d like to be out on the water working to learn forward-facing sonar.

But I’m definitely ready to get back out there.

That being said, Okeechobee is not my friend, but I’m going to change that this year. I think I’ve learned enough over the years to know better how to handle cold fronts and know that I need to figure out what happened to fish. Last year I led day one on the Harris Chain and barely caught a limit after that. In the past, I’d spin myself out when cold fronts hit. This year I’d like to find a few fish, trust in what I found, and make the best of it to start the season off right.

Make any resolutions or goals for 2021?
My first goal is to always try to fish one day at a time. I’ve had a bad habit of not doing that in past. It helped me a lot last year since had a long break from that level of competition. I was even taking it one hour at a time in practice last year, and I’ll probably need to do that again this year with only two days of practice for the Pro Circuit.

If you could spend one day in the boat with another Pro Circuit competitor, who would it be?
Ron Nelson. I wish I was Ron Nelson to tell you the truth. I’ve never really talked with him other than when I congratulated him on winning Angler of the Year, but he seems like a great guy. I would love to spend one day practicing with that guy because he’s all-in mentally and I love that.

Driving from California to Florida for the season opener is a long haul. What kind of music or podcasts do you like to listen to?
I listen to country music, but one of my favorite things to do when I’m driving through rural America, which is most of the drive, is I like to find those channels talking about the news in the local towns and the corn and beef prices. We don’t have that out here, so it’s like going back in time for me.

But as far as country music goes, I like some of the new stuff, but really anything from 10 years ago to all the way back is primarily what I like. I like that it’s relaxing music, and that’s especially nice when you’re in downtown Detroit and people are cutting you off.

Got any favorite snacks or drinks on the road or in the boat?
My boat always has cherries. I like fresh cherries when they’re available, otherwise, I keep dried ones in the boat. And really, I just drink water when I’m fishing. I usually have two sandwiches in the boat with me and I usually don’t eat them during a tournament, but in practice I make myself eat one.

I know you said you’re still waiting on your new boat, but have you been fishing lately?
I actually do have a boat I keep at the house here. I live real close to a little lake and I’ve been out quite a bit. When we get a little storm rolling in this time of year you can catch ‘em pretty good, and usually a big one. So far, we’ve caught one that weighed almost 9, a few between 7 or 8 and almost 10 over 6. I am only interested in catching big ones when I go out by the house, so I only throw ChatterBaits, spinnerbaits and jigs. It’s pretty fun.

Any technique you’d like to improve on for the 2021 season?
All of ‘em! And, I’m kidding and not kidding. But honestly, I want to improve offshore when it comes to big crankbaits and hair jigs and spoons. I don’t really get to mess with that too much. I wish I had more confidence in it.