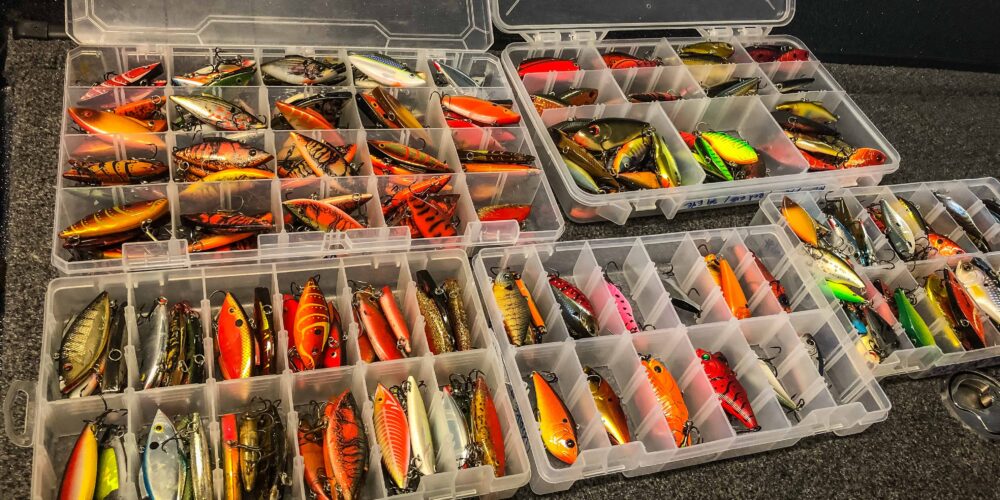 Dicky Newberry loves to throw a lipless crankbait in cold water, so he keeps his boat loaded up for any situation.
December 12, 2021 • Kyle Wood • Tackle Warehouse Pro Circuit

When it comes to tossing a lipless crankbait around from December through March there’s little argument that Tackle Warehouse Pro Circuit pro Dicky Newberry is one of the best. With decades of experience working a Bill Lewis Rat-L-Trap on Sam Rayburn Reservoir, Newberry has utilized that knowledge to bank dozens of Top 10s and wins across both local and MLF events. With that being said, Newberry was kind enough to barely scratch the surface of his lipless crankbait knowledge to help you put more fish in the boat this season.

It’s almost common knowledge that throwing a crankbait of any sort is best employed on a composite or fiberglass rod. Newberry agrees that those will certainly help you hook and land fish, but when the water is cold he has a different take on the matter, which he actually stumbled upon by accident a few years ago.

“It was a bluebird day and the bite was off and the grass was really good at Rayburn,” Newberry recalls. “I was pre-fishing for one of the Toyota Series that was coming and I backlashed or something on my [lipless] rod I was throwing, so I cut my bait off and tied it on my football jig rod, which was a 7-foot, 2-inch rod and really stiff.

“I noticed my casting was a lot better and I also noticed when I got hung in the shallow grass it took hardly any effort to dislodge it and pop it free. Well, that particular day I was getting a lot of reaction bites and I was fishing down this one stretch that I had already fished earlier in the day and never had a bite. I caught a 4-pounder, then caught a 6, then went around the corner and caught another 6. I went over to a new clump of grass and caught a 9 and I caught them all because they were reaction bites and with that rod being so stiff, as that bait would hang in the grass just a small flick of the wrist basically was all it took to free it. The bait would free up really quick and wouldn’t travel very far before it started its flutter down and they’d knock the slack out of it.”

From that day on, Newberry has become a big fan of “jig rods” when throwing lipless baits around grass in the winter and prespawn.

“With a limber rod, if they’re eating the bait you can catch them,” Newberry says. “But when things get tough this time of year and you’re getting a reaction bite and they’re slapping at the bait and you’re not hooking them, that stiff rod comes into play.

“It’s like when you’re in the woods hunting and you walk into a vine with a big thorn on it – unless you hit it at a certain angle, it may scratch you or get hung in your clothes a little bit. But if that thorn is coming out of a tree or you walked into a nail coming out of a two-by-four it’s going to stick you. With a limber rod, when they hit the bait it can just take a different course, but with a stiff rod, there’s no give.”

His weapons of choice are either a 7-foot, 5-inch medium-heavy or 7-7 heavy 6th Sense ESP (though he also uses the same rods in the Team 6 version). Newberry says that day in and day out, 15-pound Seaguar InvizX fluorocarbon is his best all-around line choice, though he’ll go heavier if he needs to keep his lipless crankbait up in shallow grass. He also points out that these “jig rods” will handle a ½-ounce and ¾-ounce Rat-L-Trap, or any other lipless crankbait, with ease.

Changing your hooks isn’t a groundbreaking piece of advice. However, Newberry goes against the grain on this topic as well, and results don’t lie.

“I know people like throwing EWG-style treble hooks on a [lipless crankbait] but I feel like when you’re dealing with a reaction bite and fish aren’t totally committing to eating it a round-bend treble works a lot better,” Newberry says. “I really like the Gamakatsu Aaron Martens TGW Nano G-Finesse treble. You can’t put your hand close to it without getting stuck it’s so sharp.

“When I changed to those hooks I noticed that a lot of the fish that were slapping at the bait, I’d start catching them versus having an EWG treble. Heck, even if you just catch one of the fish that slapped your bait it matters, especially if it’s a 6- or 7-pounder.”

Newberry points out that using a round-bend treble is the perfect complement to the heavy rod he throws a Rat-L-Trap on and has become a staple combination this time of year to put more fish in the boat.

With the style of treble hook being something to pay attention to, the Texas pro also notes that varying the size of your trebles can also help you fish grass more efficiently and effectively.

“Another thing to play around with is using different size trebles on the front and back of the bait,” he says. “I may put a No. 3 on the front of a ½-ounce Rat-L-Trap and put one size smaller on the back. It repositions the way the bait sits in the water. I like my baits running a little more vertical, so I’ll put a smaller hook on the tail. It allows the tail to pick up more and when the nose hits some grass it tilts forward and comes over better instead of plowing into it. It also pops free from the grass a little easier with a smaller treble on the tail.”

Tip #3: Cadence, Details are Everything

“Pay attention to everything you do with a Rat-L-Trap,” Newberry says. “I get in a trance when I’m fishing with it because I’m trying to pay attention. Your cadence with a Rat-L-Trap is probably more important than anything. It’s like that in just about any kind of fishing, but I think with a [lipless crankbait] it’s almost more important. You need to know, did he bite it when you popped it out of the grass? Were you pumping the bait? Did you let the bait flutter? I’ve had days where you had to reel it as fast as you can to make them hit it and I’ve had others, which is really common, where they hit it on the flutter as you Yo-Yo it over the top of the grass.”

For someone with as much know-how as Newberry has, something as simple as line size or spool fullness can make or break a day on the water. He’s experienced numerous times on the lake when something changes his cadence and he stops catching fish. In fact, he recalls a recent Toyota Series event on Rayburn to drive home the fact that details matter.

“A typical day for me fishing a Rat-L-Trap, I’ll start out with four rods with the same reels, same rods, all spooled with the same line and the spool filled to about the same spot on each reel,” he adds. “That’s strictly to help keep your cadence the same even if you’re throwing different baits. The little things like that can make a big difference.

“A good example of that is I had gotten on a school of good 3 ½- to 4-pound fish and I put my Power-Poles down and was culling through 3 ½-pounders,” Newberry details. “I probably caught 20 fish there in the one spot. Well, then I made a long cast and got a flare-up in my line, so I stripped off 50 feet of line probably and retied my bait. I couldn’t get another bite after that and I realized it changed my speed, it changed my retrieve. So, I pulled out another setup that was the same as what I started with and I got to catching them again. I could have probably worked it out with the setup I cut the line off, but I had been catching so many fish that my cadence and retrieve was so set that I couldn’t make myself slow down or speed up that extra bit. So, it pays to have multiple setups ready, especially in a tournament.”