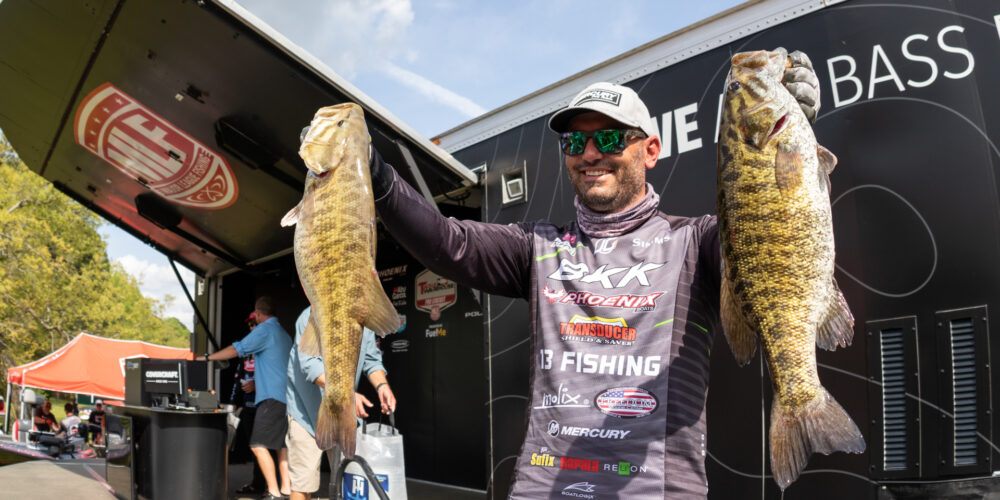 COUNCE, Tenn. – Things are finally starting to stabilize on the Tennessee River. Which, ironically, means chaos seems about to break loose at Lithium Pros Stop 3 on Pickwick Lake Presented by Covercraft.

After a week of fluctuating weather and water levels, Day 1 of the Tackle Warehouse Pro Circuit Presented by Fuel Me event saw conditions mellow out for what looks like the foreseeable future. And that seemingly has put the spring transition into hyperdrive.

Pros caught fish in all stages of the spawn today, but with so much happening in such a condensed timeframe, it was the pros who capitalized early in the day that did the best. Pros like leader Jacopo Gallelli, who had 19 pounds before 9 a.m. and ended up with 23 pounds to set the pace.

“I cannot be more happy,” Gallelli said. “I just got lucky. I had a place I’d fished in the past but didn’t go over to in practice. I felt I’d give it a try this morning because I was so desperate. Within 15 minutes I had a 3-pounder. Then I caught a 5-pounder, and I was like, ‘OK. There’s something here.’ So I fished really slow and came out of that spot with over 20 pounds.”

His story was hardly the only one like it, as nearly every pro in the Top 10 mentioned they sacked up the majority of their weight within the first hour or so, with many mentioning a shad spawn. What set Gallelli apart, though, was that he had three kicker smallmouth.

Pickwick is known as one of the best smallmouth fisheries in the Southeast, so seeing some giant brown fish brought to the scales is no shock. But what is surprising is that none of the big bags featuring smallmouth came from the famed tailraces below the Wilson Dam.

Instead, Gallelli focused on an area he was surprised no one else was fishing; one he said he had to keep tight-lipped about because “it was so obvious once people realize what I’m doing.” Then again, it may not matter if people know, as the fish are transitioning so fast that Gallelli acknowledged they may not be there tomorrow. Or they may not be there because he burnt the spot down today.

“If you know me, if I’m on the fish, I catch them,” Gallelli said. “I just kept coming back to them and caught all the ones I could see. So, no, I don’t think I’ll catch a bag tomorrow like I did today from that spot.

“Fortunately, I have a second pattern I used to upgrade today. So I’m just very happy. It was a blessed day.”

He honestly doesn’t know what it is about Pickwick, but every time he comes, Mike Surman finds a way to do well.

“This place has got big ones, and I like fishing for big fish,” Surman said after cracking 21 pounds, 5 ounces. “I never expect to crush them or even know how I’m going to catch them. I just try and focus on those big ones, and come the end of the day, I always somehow catch them.”

Surman found his big fish focusing shallow, but he mentioned he had “a couple in current deals out just a little bit” that really were key. In fact, one of them produced four fish for 17 pounds in a 10-minute span before he left.

With that quick-hit mindset, Surman admits he doesn’t fully know all what’s on his special spots, and a lot of that is because he had such a terrible practice. He figures he only got four hours of good practice in for the event after he had massive trolling motor issues and then lost his phone in the lake.

Thus, Surman relied mainly on history to start Thursday before spending the rest of the day practicing and trying to expand upon it. What he saw definitely got him excited.

“Any time you’re fishing out, more main-lake, you have a chance for the spots to replenish,” Surman said. “So, I fished some stuff in the way back of creeks, but the current spots are really exciting. I have about 20 of those spots that I always seem to catch big ones from.”

Like father like son. Though, in this case, Corey Neece bested his dad, Jimmy Neece Jr., while playing the same shad-spawn game.

The Neeces brought in nearly 40 pounds of fish today focusing on an early shad-spawn bite, with Corey cracking 21 pounds, 1 ounce. Problem is, he admits it will be hard for him to do it again, as he’s not sure how long the shad-spawn bite will go this week.

Fortunately, while the majority of the field seems focused on the incoming wave of spawning bass, Corey is actually more excited about the postspawn wave.

“By 10 a.m. it was hard to get a bite,” Corey said. “So, I spent a lot of time idling out deep this afternoon, and I found some out deep. I’m hoping more are coming out. I don’t want to fish the bank if I don’t have to because I hate getting in line and going down the bank. I’d much rather be offshore, and it’s setting up like I can.”