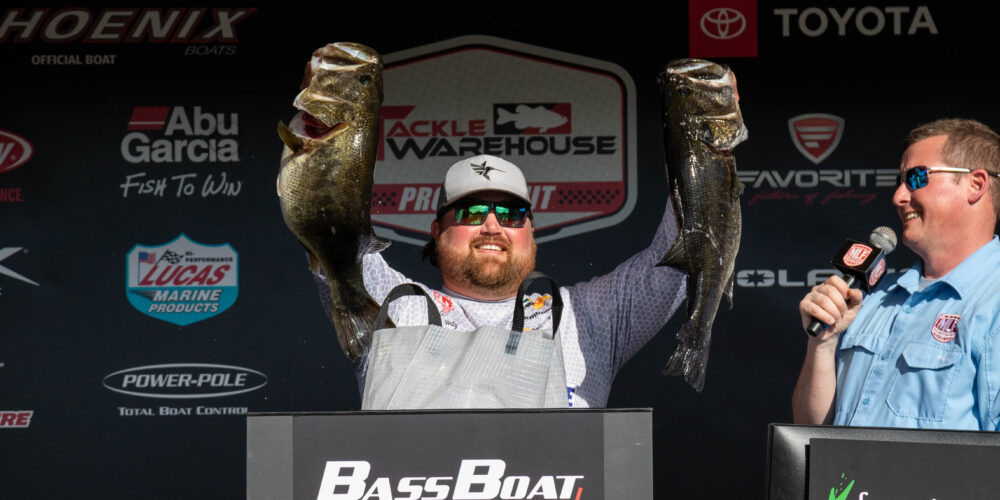 LEESBURG, Fla. – After practicing earlier this week in 70 to 80-degree temperatures, MLF Tackle Warehouse Pro Circuit anglers were greeted by chilly 30-degree temperatures Sunday morning on Day 1 of the Bass Boat Technologies Stop 2 at the Harris Chain of Lakes Presented by Frogg Toggs. Despite the cold temperatures early, the afternoon warmed up and the big bass were still chewing.  Pro Grant Galloway of Houlka, Mississippi, weighed a five-bass limit totaling 23 pounds, 9 ounces to grab the early lead after Day 1, while Florida guru “The Honey Badger” Randall Tharp of Port Saint Joe, Florida, looms large right behind Galloway in second place, just 10 ounces back with a five-bass limit weighing 22-15.

The four-day event, hosted by Visit Lake County, features a roster of 157 of the world’s best bass-fishing professionals competing for a top award of up to $135,000. The tournament marks the second of six regular-season Pro Circuit events in 2022 and offers competitors a total purse of more than $850,000.

Sunday was a great day for Galloway, a former College Fishing angler from Mississippi State University. The sophomore pro caught two giants early – an 8-and a 9-pounder.

“First thing this morning I got to the area I was fishing and it was really windy,” Galloway said. “I had one windblown point that I liked, so I bombed a big stickbait up there and she bit, then wrapped me up in the vines and pads. I hightailed it to her and reached down and grabbed her and got her in the boat.

“I was in shock,” Galloway continued. “After I had passed out and come back twice, I worked down the bank and I saw another blowed-in trashmat. That’s what I call it – just a mix of eelgrass and hydrilla. I pitched to it and felt a thump – I set the hook and just pinned it. I again hightailed over to it, and I could only see her lip sticking through the mat. I just put my hand in and pulled it out, not having a clue how big it was. Once I saw it, I was like, ‘oh my.’ I had two for 17. And those were my first two fish of the day.”
After boating his two giants, Galloway spent the rest of the day combing though keepers to fill out his limit.

“I had a little jerkbait and caught a limit pretty quick, but I felt like I was just burning through fish,” Galloway said. “So I went out on a flat and threw a crankbait in the grass – I caught probably another 15 fish on the crankbait – and culled three or four times, but just ounces.

“The wind made things really tough,” Galloway said. “I wasn’t able to fish thorough – I had a couple of stretches that I intentionally wanted to fish very slow – pitching, flipping and picking them apart. But the wind was so bad I couldn’t do anything, so hopefully tomorrow I can capitalize on some of those areas.

“Today was just a blessing,” Galloway went on to say. “I fished clean, and I was fortunate and blessed to get those two big Florida bites, and that’s what you need here if you’re going to compete. I’m excited to see how it shakes out tomorrow.”

The top 20 pros after Day 1 on the Harris Chain of Lakes are:

In Tackle Warehouse Pro Circuit competition, the full field of 157 anglers compete in the two-day opening round on Sunday and Monday. The top 50 pros based on their two-day cumulative weight will advance to Tuesday. Only the top 10 pros, based on cumulative weight from the first three days, will continue competition on Championship Wednesday, where weights will be zeroed and anglers will compete in a one-day shootout for the grand prize of up to $135,000, including the lucrative $35,000 Phoenix MLF Bonus for qualified anglers.

Throughout the season, anglers are also vying for valuable points in hopes of qualifying for the 2022 Tackle Warehouse Pro Circuit TITLE Presented by Mercury, the Pro Circuit Championship, where they will compete for up to $235,000. The 2022 TITLE will be on the St. Lawrence River in Massena, New York on Aug. 16-21, and is hosted by the Town of Massena.

Anglers will take off at 7:30 a.m. ET each day from the Ski Beach at the Venetian Gardens, located at 201 E. Lake Harris Drive in Leesburg. Weigh-ins will also be held at the Ski Beach daily at 3:30 p.m. Fans are encouraged to attend the morning take-offs and afternoon weigh-ins, and also follow the live on-the-water action all four days of competition online on MLF NOW! beginning at 8 a.m. ET at MajorLeagueFishing.com.

The MLF Tackle Warehouse Pro Circuit Bass Boat Technologies Stop 2 on the Harris Chain of Lakes Presented by Frogg Toggs will feature live on-the-water coverage and a two-hour action-packed television show that will premiere on the CBS Sports Network on Saturday, July 16 from 7 to 9 a.m. ET.