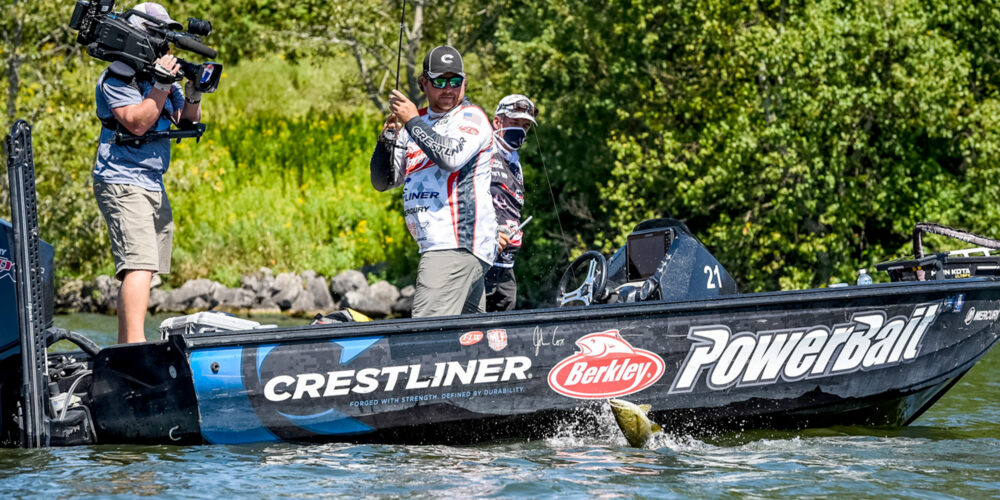 After a full-out runaway Monday by Kurt Mitchell in the first Qualifying Round of the Tackle Warehouse TITLE Presented by Toyota, Florida pro John Cox rolled into Sturgeon Bay around 10:30 p.m. Monday night following a 9-hour drive from a tournament on Lake St. Clair in Michigan. The Florida pro showed up at takeoff at 6:10 a.m. on Tuesday, picked up his STAT unit and official, and backed his boat into the water at Sawyer Park for his first-ever look at Sturgeon Bay.

“I guess we’ll just go practice and see how this goes,” Cox joked as he headed toward the ramp.

The plan went pretty darn well (after a few hiccups). The Berkley pro connected with 18 smallmouth for 66 pounds, 5 ounces to hold off Spencer Shuffield (61-2) and Joey Cifuentes (60-6) for the day two lead.

After plinking around docks and seawalls for nearly two hours without a scorable fish (and losing a couple of fish that he identified as 5-pounders), Cox connected with a 4-9 to get on the positive side of SCORETRACKER® late in the first period. The Berkley pro chipped away for the rest of the day with a drop-shot armed with Berkley PowerBait MaxScent Flat Worm and a MaxScent Flatnose Minnow, connecting with several quality smallmouth: he caught two 4-10s to work his way into the top five, and took the lead briefly two times in the second period with a pair of 4-11s.

Cox claimed the lead for good an hour into the final period with back-to-back 5-pounders – a 5-2 and a 5-1 that bit in a 4-minute span just as Cox was contemplating a move to another spot.

“What is even going on, I don’t even know?” Cox giggled to himself as he weighed in the 5-1.

Cox’s average fish was excellent: his 18 smallies averaged 3-10, with eight fish weighing in at 4-10 or better.

“The main goal today was just to learn, and I’m liking what I’m seeing,” Cox said. “I’m liking how it’s setting up. Fish are moving around a lot, so that give you and opportunity to land on more than just sitting on one spot. We kinda landed on them, stayed on them and hammered them hard today. That was up there with one of the best smallmouth days I’ve ever had.”

For more from Cox and the other top pros, head over to FLWFishing.com.

How to Watch Live

The Tackle Warehouse TITLE Presented Toyota by continues on Wednesday as Group A fishes their final Qualifying Day.

FLW Live will be available at MajorLeagueFishing.com. The live coverage will run from 7:45 a.m. CT until 4:45 p.m. CT each day of the event.