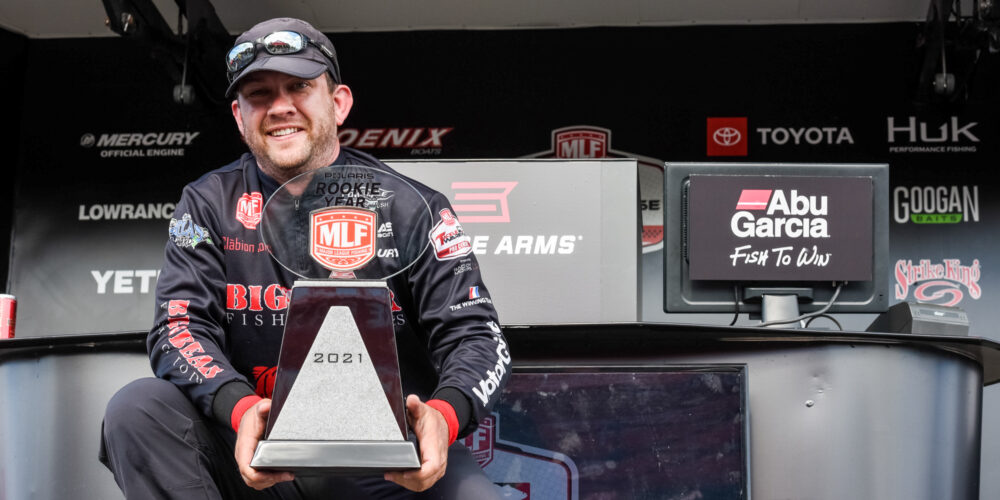 Clabion Johns entered the final Tackle Warehouse Pro Circuit Presented by Bad Boy Mowers event on the St. Lawrence River sitting 11th in Angler of the Year standings and leading the Polaris Rookie of the Year race. After two days of fishing on the St. Lawrence and making his third top-50 cut of the season, Johns clinched his ROY title and the Polaris Ranger 1000 that comes with it.

Though winning ROY is something Johns is more than pleased with, the Social Circle, Georgia, pro admits he had his sights set a bit higher for his first year on the Pro Circuit.

“When the schedule for this year got released, I was completely jacked,” says Johns. “It meant I could fish in the dirt all year, no worries, and I’m not saying I came into this season thinking I was going to win Angler of the Year, but I thought I was going to be in the running. If I could put up a decent season, I thought I’d have a decent shot at making the [Bass Pro Tour] and winning Rookie of the Year.

“One bad tournament this year cost me a top five in points, but I set my goals high and knew if I could get close to them ROY would follow.”

While Johns may come across as a confident angler, the truth is he’s spent years rubbing elbows with pros and local hammers across the Southeast. So, when it came time to step up to the Pro Circuit, he never doubted his skills or abilities to hang with the best.

“What’s funny is I guess I’m a rookie on tour, but I don’t feel like a rookie,” he admits. “I actually fished more MLF tournaments than anybody in the country did last year – I fished 23 events. I’ve always been a road warrior. There’s years I’ve fished 100 tournaments. I’m like a cash poker player that does it with fishing. Within four hours of the house I can put up $100-$500 and fish for between 2 and 10 grand, so I’d just fish whatever.  But once [MLF] made it where you had to qualify to fish the Pro Circuit I was in.”

By in, Johns means he was committed to snagging a top-five points finish in the Toyota Series. He did that with relative ease in the Southeastern Division where he finished 24th, 11th and seventh to land fifth in points and get his bid for the Pro Circuit.

When the Pro Circuit season kicked off on Lake Okeechobee this year, Johns wasted no time getting to work. He finished 20th and quickly got the ball rolling with a good paycheck heading into Stop 2 on Lewis Smith. The issue at Smith, however, is that Johns found the same fish eventual tournament winner John Cox did and he opted to abandon that area to leave it for Cox, who had a better boat draw.

Though it was a noble move, it led Johns to his worst finish of the season in 90th.

Next up was Lake Murray, where Johns again could lean on his shallow-water prowess to make another Day 3 cut and get the train back on the right track for the event he had circled on the calendar since the start – Lake Eufaula.

“Eufaula was the event I was looking forward to the most because I no joke have more hours on Eufaula than the rest of the field combined,” says Johns. “I grew up fishing that lake and since I was 12 years old I spent no less than 10 days a year on it. I would rent a cabin on it sometimes three times a summer for a week. I’ve spent so much time on that place.

“On Day 1 I got some of my normal juice to myself and caught 14 pounds quick. Day 2, I dropped in my spot and a guy runs past me and sets down on the grass line. I snatched the trolling motor up and ran to another area I had to myself and caught 9 pounds. They just didn’t bite. That one stung.”

Squeaking out one of the last big checks and a 58th place finish wasn’t how Johns saw that event shaking out. Still, he did what he had done throughout the season and rebounded on the Potomac by nearly making the final day and finishing 13th overall, which put him in command for the ROY title.

Now, with the opportunity to earn more points on Day 3 at the St. Lawrence, Johns is happy to keep his primary goal of qualifying for the Bass Pro Tour alive.