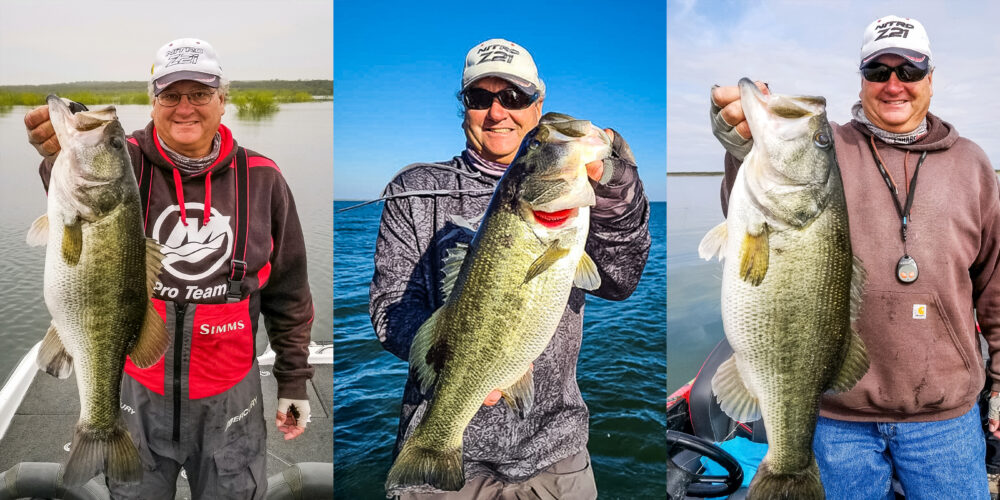 Tackle Warehouse Pro Circuit pro Matt Reed spends most of his time off the tournament trail guiding at Falcon Lake in South Texas. Falcon is home to most of the biggest catches in MLF history, and is one of the best lakes in the country for quantity and quality when it comes to largemouth. In the winter, the highs are often in the 70s, and Reed spends his days cranking up monster largemouths.

Come wintertime on the border, the water temperature at Falcon is usually about 60 degrees, and Reed’s big-fish bite changes from a dragging bite to a cranking bite.

“What I see happen in the winter down here is, they’ll go from biting a Carolina rig or a football jig, and they roll into a crankbait bite,” Reed says. “I really don’t have a reason that happens, but it’s repeatable. It happens most years, and those fish down here, when they do that, they actually will come up on the rock a little shallower than they were when they were biting your jig or your Carolina rig.”

Reed says that the best rock for cranking is more vertical and larger than he’d fish in the summer. The verticality is important because it allows the fish to slide shallower or deeper with ease depending on the weather.

“The big fish tend to get in that 10- to 15-foot range, and before, they may have been in 15 to 20 feet,” Reed says. “I think that may be a precursor to the prespawn, but it’s in the dead of winter when it happens. I also think it may be about warmth, I think that shallower rock may have a little more heat, even in colored water.”

For his winter cranking, Reed doesn’t do anything too out of the ordinary on the tackle front.

His primary baits are either a SPRO Little John DD 70 or an Azuma Z Boss 20 – the key is a bait that will dive deep and color with some chartreuse in it. For his tackle, Reed uses 12-pound-test Bass Pro Shops XPS Fluorocarbon, a Bass Pro Shops Johnny Morris Platinum Signature Series baitcaster in the 6.8:1 gear ratio and a 7-11, moderate action Xotic HPR X5 Hybrid Series rod.

The Rest of the Recipe

Cranking in the winter isn’t anything out of the ordinary in Texas, but for Reed, it’s important to get it right. The biggest part of his pattern is keeping the bait firmly on the bottom at a medium speed.

“I’m throwing a plug that will bang bottom big-time,” Reed says. “I want something that will run out to 16 or 18 feet, but I’m catching a lot of them in 10 feet, just really banging the rock. I reel at a pretty good clip, but not fast, fast. I’m not just counting rocks, you have to do that with your plastics, but not the crankbait.”

Reed’s Falcon success is pretty incredible all told, and he and his clients catch more 10-pounders in a year than most anglers catch in a lifetime. So, if you want some big success on the border, you’d be wise to bring a crankbait.

“The bigger fish go to the crankbait here in the winter,” Reed says. “I still can catch numbers of fish on plastics, but not big ones. The best part is, the high is about 70 degrees this time of year, so I rarely have to wear more than a hoodie.”