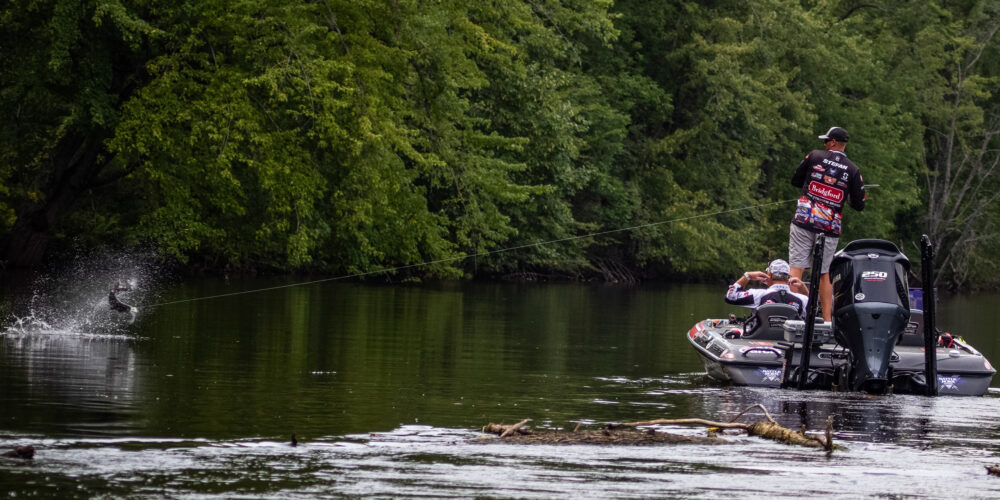 A veteran of Midwestern river fishing, Tackle Warehouse Pro Circuit pro Matt Stefan has impressed in nearly every event that has allowed him to compete in flowing water fishing for smallmouths and largemouths. Raised on fisheries like the Wisconsin River and Wolf River, Stefan has plenty of tips to help you do better on rivers. Below is a selection of the best stuff, from the baits you need on hand to what water features you should keep an eye out for.

Most rivers offer a lot of potential fishing places, and with current draining your trolling motor batteries and plenty of navigation concerns on some fisheries, being efficient is of added importance. Unlike fishing on most lakes, you can’t just drive to a point on the map and check it out with your sonar when you’re on a river.

According to Stefan, if you’re fishing the outside of a bend, you want to start at the top and bottom. If you don’t get bit, there’s no reason to fish in the middle. If you do, then you’d be wise to fish the entire bend.

Stefan has a few favorite features to target that he thinks don’t get as much pressure as they should.

“Cut banks are often overlooked and they’re one of my favorites. Anytime you’re dealing with current you’ve got the potential for cut banks, where the current flow erodes underneath,” says Stefan. “They can be easily identified by what I call “black water.” If you’re going down a bank and you see sand, sand, sand, and then all of a sudden, a 10-foot stretch of dark water, that’s because you’ve got a stretch of undercut bank. If you’ve got anywhere from 6-inches to 5-feet of water you’ve got really good potential to be catching bass.”

Riffles also get attention from Stefan, mostly because they mark an overlooked drop off.

“If you’ve got a side channel or a skinny part of the river where you actually have riffles, where you may only have 3- or 4-inches of water, there will be a little drop behind it,” outlines Stefan. “Those can be fantastic places to fish because people will think they’re too shallow. They’ll see 4-inches of riffle water and overlook the hole behind it.”

Finally, Stefan likes to target the up-current side of islands.

“Island heads will have sand deposits or gravel deposits,” Stefan explains. “It’ll be at the top of the island, but a lot of times what people don’t realize is you may have a little bit of a trench right between the actual shoreline of the island and the sandbar coming off the front of it. It may only be the width of your boat, but it’s enough to be a very good fishing location.”

Getting from point A to B in a timely and safe manner is generally more complex on rivers than lakes. For Stefan, running a marked channel is the dream scenario, but he also has a few tips for staying safe off the beaten path.

Stefan also says that reading the water well can help you identify a problem before it becomes serious.

“The deepest places any time you’re in a river are the bends, the shallowest places are often where the river is the straightest and the widest, which a lot of people find deceptive. The most concerning places are your straightaways, and if the river widens up, chances are it shallows up as well.”

Having a hydraulic jack plate is great for skipping over sandbars, but Stefan warns that relying on long runs over water that’s extremely shallow is a great way to mess up your lower unit and then some. Finally, one key he always carries on a river is a long and heavy-duty tow strap – that way you can pull someone else off a sandbar or flag down someone to pull you.

Have the Right Arsenal

For baits, you don’t necessarily need a huge arsenal in most rivers. Generally, if it will catch bass shallow you’re off to a pretty good start.

One of Stefan’s go-to baits is a Dirty Jigs Swim Jig with a Berkley PowerBait The Deal as a trailer.

“I really like the Deal and its irregular kicking motion, I think that’s really good,” says Stefan, who is also eyeing up the Berkley PowerBait Boss Grub as an option. “I feel like every two years I switch my trailers, that seems to be how it goes for me.”

Other baits Stefan likes for rivers are a jig to flip to cut banks like the Dirty Jigs Luke Clausen Compact Pitchin’ Jig, a topwater like the Berkley J-Walker 100 and a more subtle option like a Berkley PowerBait MaxScent The General either Texas-rigged or wacky-rigged. Whatever you choose, there’s usually no need to go super finesse on rivers. Flowing water keeps things moving, and generally bass in rivers that aren’t gin clear are pretty aggressive and ready to eat what you’re offering.