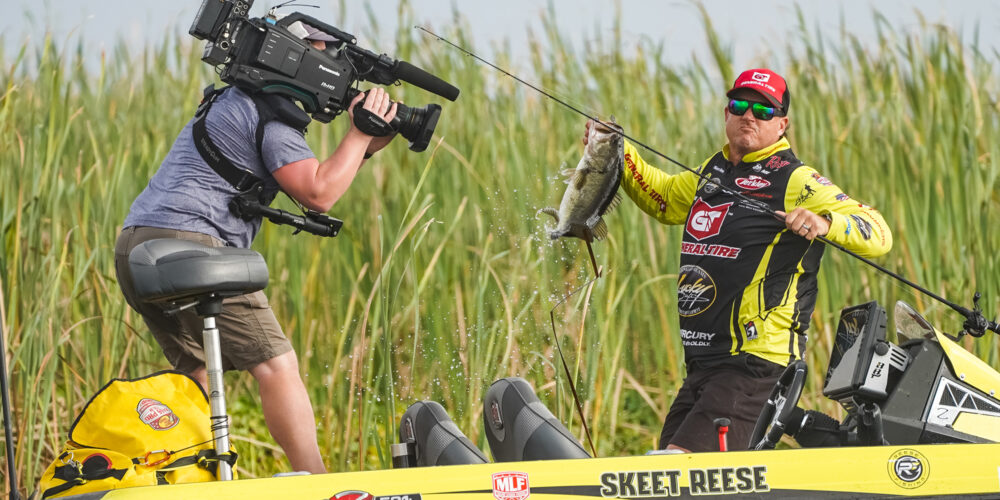 CLEWISTON, Fla. – Not to put too fine a point on decision making and big-fish swagger being the key difference-makers on Championship Sunday of the first Tackle Warehouse Pro Circuit tournament of the season, but the angler sitting atop the leaderboard midway through the day – Skeet Reese – has decision-making skills and big-fish history aplenty.

He also has five fish in the live well that weigh an estimated 27 pounds, and a 5-pound lead with just over 3 hours of fishing time left in the day. The question now is whether another guy with similar big-fish street cred – Florida pro Chris Lane – can run Reese down.

Buckle up, it’s about to be an interesting afternoon.

Reese made a quick early decision to follow the wind and move away from the deeper offshore cover he’s been fishing all week in South Bay in favor of shallower edge cover. He transitioned from flipping a Berkley PowerBait MaxScent The General and went to work winding a bladed jig with a 4-inch Berkley PowerBait The Deal trailer along the face of shallow reed edges, betting that the wind would push fish to edge cover and kick-start the bite.

He bet right: a flurry of big bites catapulted Reese to 24 pounds by 9 a.m., with a pair of 6-pounders and one pushing 8 pounds sending him from the middle of the pack to a double-digit lead that left the 24-year veteran in disbelief of his own productivity.

He upgraded again an hour later to climb go his current estimated weight of 27 pounds and a total of 82-5.

“I just thought to myself ‘Let me try this bank’,” Reese said. “With the wind pushing them up, maybe that breeze I will make them bite. Well, they’re biting. The bladed jig is the deal, but I’m assuming that’s going to dry up and we’ll have to flip it up to flipping. Those fish will probably get a little tighter (to the cover).”

Lane Making a Game of It

Even as he was in the middle of his morning mash-up, Reese admitted that he was far from running away with the $100,000 winner’s check: “You just never know what the other guys are going to do out here (on this lake),” he said. “If they’re biting this good today here, what are they doing on other parts of the lake? I’m excited, but cautious, too.”

That caution is warranted.

Reese’s comfortable lead dropped notably around 11:30 a.m. CST, when Lane boated what looks to be the biggest fish of the tournament, a 9-plus-pounder that cut the lead from 12 pounds to 7. Lane further cut into the lead just before we hit “publish” on this report, reducing it to 5 pounds.

Among the 10 anglers fishing on Sunday, Lane has the longest history and deepest track record of success on the Big O, with four tour-level top 10s.

And he’s clearly around big fish: He lost a sizable bass right before he landed his giant, and has seen big ones swirl around his bait (although one might’ve been a snook).

“This lake is full of (big fish),” observed MLF NOW! analyst JT Kenney. “I’ve seen 40-pound bags come out of this lake, the potential is there. We know that the afternoon bite could be amazing. We could see multiple 20- and 30-pound bags.”

Battling to Make Up Ground

Bill McDonald and Miles Burghoff continued to chug away through the morning, McDonald building an estimated limit of 15-8 to stay within 11 pounds (70-2) of the lead, and Burghoff hovering around the 12-pound mark (currently 14 pounds off the lead). Jim Neece Jr., who has led two days of this tournament, has worked his way to 11 pounds.

Tune in to the live weigh-in at 4 p.m. EST on MajorLeagueFishing.com, where you’ll see the crowning of the first champion of the 2021 Tackle Warehouse Pro Circuit presented by Bad Boy Mowers season.