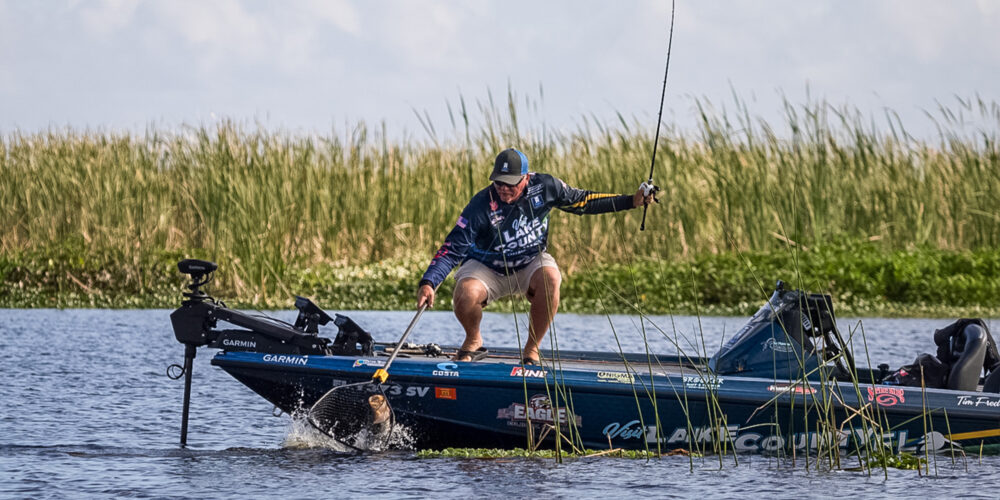 CLEWISTON, Fla. – Lake Okeechobee in February can be a mixed bag. Long stretches of vegetation can produce nothing but buck bass and small limits, or even nothing at all.

Then again, you can just as easily be like Tim Frederick and Brian Latimer, who each have weeded through some small males to pluck out monsters in the form of 8-pounders. Not a bad start to the 13 Fishing Stop 1 of the Tackle Warehouse Pro Circuit Presented by Bully Dog season opener.

Frederick got off to a hot start to the day after admitting to having as many as 40 bites on the final day of practice. By 8:30 a.m. ET, the Florida hammer (who won at Okeechobee on the then-FLW Tour in 2018) has his limit for close to 19 pounds and has since culled up to around 21 pounds for the unofficial lead. With his bag anchored by that 8-pounder, Frederick still has plenty of room to upgrade before checking in later.

Latimer, who returned to the Pro Circuit this season after taking the year off in 2020 to fish a full season of Bassmaster Opens, ran into a giant of his own to bring his limit to about 14 1/2 pounds. That means he has a bunch of dinks filling out the rest of his bag – great news for Latimer considering Okeechobee is chock-full of kicker fish with which to upgrade.

While we haven’t heard about too many more Florida hawgs being caught just yet, there have been reports of some solid limits across the field. Rookie Clabion Johns has been having a strong day of consistent upgrades, currently sitting in fourth place with about 17 1/2 pounds. He’s joined in the top five by Anthony Gagliardi with 17 pounds. They’re hot on the heels of Florida stick Trevor Fitzgerald and his 18 pounds in third and Tyler Stewart (18 3/4 pounds) in second.

Beautiful weather greeted the field this morning, and it’s only gotten prettier as the day has gone on. It’s still fairly mild, though, and it seems like it might be a little while before moving baits really start doing the heavy lifting on the famed fishery. Instead, pros are turning to dragging and flipping baits in target-rich environments – primarily pencil reeds.

That means a ton of Texas-rigged stick baits and creature baits, though we’ve seen a number of frogs and prop baits getting the call as well, in addition to a ChatterBait or two and even a jerkbait.

Still, “slow definitely seems to be the deal,” according to senior manager Kyle Wood, who’s reporting from the water. The wind picked up enough later in the morning to see a few more winding baits get the call, though it’s supposed to have peaked around 11 mph already, according to forecasts, with wind tapering off to 7 or 8 mph by check-in.

The predominant tactic in play is blind-pitching to spawning fish around reeds, pads and under mats.

The day opened with big clusters of boats in all the most popular areas of Okeechobee. Those areas have since thinned out as pros attempt to run their patterns in more solitary areas. Matt Reed and Pete Ponds are all looking for something of their own with about 16 pounds in their livewells and plenty more work to do. Even so, popular haunts like Harney Pond and Dyess Ditch are still packed with boats.

So far, we’ve received updates from less than half the field, so it’s not all that surprising to see just 35 pros with double-digit weights right now – with about three hours until the first flight checks in. It’s looking like the magic number to set up a strong tournament is likely going to be north of the 20-pound mark.

An angler we haven’t heard from is 2020 Angler of the Year Ron Nelson. On the other hand, we do have updates for “The General,” Larry Nixon, who’s making his triumphant return after missing 2020 following surgery. Nixon is reminding the fishing world he’s still one of the best in the business with his 12 1/2-pound limit (currently and unofficially in 17th place).

Elsewhere, Bass Pro Tour standouts Michael Neal and Justin Lucas are both chipping away with quality limits of 13 1/2 and 13 pounds, respectively, inside the Top 15.

With three hours before weigh-in starts (and plenty of flights checking in later than that), there’s still a lot of time for Okeechobee to start showing out the way everyone knows it can. Stick with the live leaderboard, which will be updated until 2 p.m. ET and be sure to tune in for the live weigh-in show at 3 p.m. ET on MajorLeagueFishing.com.