MORNING RESET: Anyone is Capable of Winning Today on Champlain 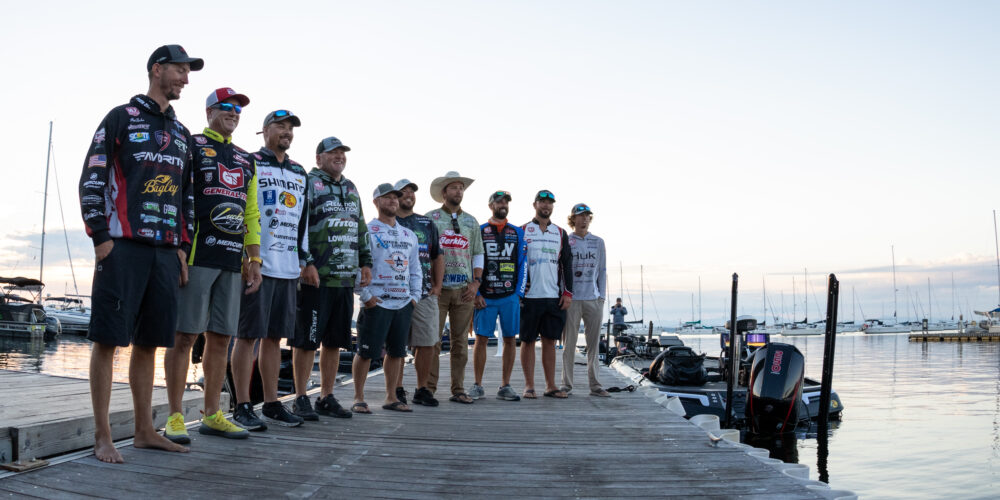 PLATTSBURGH, N.Y. — One hundred forty-four anglers are out and just 10 remain at Covercraft Stop 6 Presented by Wiley X on Lake Champlain. In what will likely go down as one of the most prolific professional tournaments on Champlain in recent memory, weights have now been zeroed.

Today, it’s truly anyone’s ballgame. No angler fishing on Championship Monday has boated less than 57 pounds of bass over three days. Five have boated more than 60. And the remaining competitors are scattered all over Champlain – from the narrows of Ticonderoga down south to its northern reaches near the Canadian border.

After three days, Kyle Hall, Kyle Cortiana and Andy Newcomb claimed the most weight of the group, but anglers have fished a variety of patterns to land in the Top 10.

The Boat and Buoy Boys

Cortiana and Matt Becker are leaning heavily on a boat and buoy pattern popularized by Austin Felix at last year’s Bassmaster Elite Series event on the same waters. Both anglers say they have fish left for the final day, although Cortiana also says he’s mixing the pattern with other areas – like deep rocks and grass flats – to cull up.

“Really, every day I’ve laid off of them,” Becker said. “I haven’t fished much after 9 a.m., so I really haven’t seen what the potential is. I’ve caught my 20 pounds and just kind of laid off of them to start practicing. I don’t know what will happen if I stick with it all day long.”

Although Cortiana boated the biggest bag weighed in so far, Becker could be considered the favorite going into a single-day shootout. Most of his fish are suspended in 40 or 50 feet of water beneath floating cover. And, Becker says he has seen many of the ones he plans on targeting on LiveScope throughout the week.

“It’s going to be fun to watch for sure,” he said. “It’s going to be all about getting a couple of those big bites that separate people. A 5-pounder is really going to separate someone in a shootout. I think we’re going to need 22 or 23 pounds to win.”

Banking on the Right Area

“There’s no holding back,” said Dakota Ebare, who wrapped up the first three days in fifth place with 60-4. “I know a lot of us have been taking it easy on some areas and not trying to pressure them too much. What it’s going to come down to is leaning on those places, seeing what’s there and it hopefully going the right way.”

Ebare plans to stick to a drop-shot on the final day, but might upsize his bait to entice larger fish to bite.

“It’s all about being in the right area,” he said. “It’s not as much about the particular bait. I’ve thrown about 10 different baits at them and I caught fish on all of them.”

“I’ve been running a lot of rocks, a lot of isolated boulders and rock veins,” Canada said. “The first two days I barely moved at all. The third day, I ran all over the place.”

Canada said his game plan going into the championship round is to fish free.

“I might have burned everything down,” he said. “But, we’ll see.”

If there’s a dark horse in this event, it’s Milford, Delaware, angler Kurt Mitchell. Mitchell is the lone angler heading south to hang tough in this event. On the first two days, the hour-long run to Ticonderoga paid off with 20-pound bags of smallmouth (really!). On Day 3, Mitchell departed from the pattern and let his honey hole reset.

On a lake where a 5-pound smallmouth is considered a kicker and nobody is having trouble catching a limit, one or two of Champlain’s 6-pound largemouth could prove to be a deciding factor. For the most part, they’re known to reside down south, temptingly close to the location where Mitchell has been boating a bevy of smallmouth since the first day of practice.