MORNING RESET: Can the Pros Keep up the Pace? 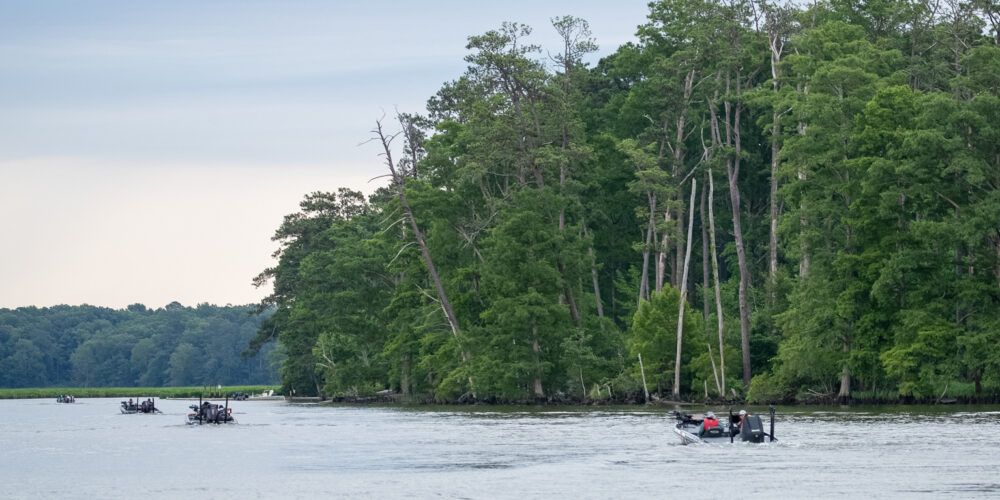 RICHMOND, Va. – While the fishing on Day 1 of the Toyota Stop 5 Presented by PowerStop Brakes on the James River was impressive, there are some lingering questions regarding fishing areas and the weather.

A large contingent of anglers is running similar patterns and sharing areas, namely in the Chickahominy River, which begs the question if it can hold up for three more days in the Tackle Warehouse Pro Circuit Presented by Fuel Me event. The morning thunderstorms on Day 1 could have also played a role in getting the Virginia bass to bite so well. The forecast is calling for plenty of sunshine from here on out, so the pros have a few questions left to answer today.

Can the Chick Hold Up?

It’s no secret that the Chickahominy is the place to be for most significant events on the James River. It’s been that way for a while. But with the rest of the system improving in recent years, more viable options for a win exist.

Many in the 154-angler field chose to stick with the Chick, which was a busy place. Is there enough to go around with so many bass shallow and anglers sharing water? Time will tell and we’ll know more after today’s weigh-in.

Weather will be another thing to watch as yesterday’s morning storms coincided with an excellent tide situation to create a feeding frenzy. Will the fish be as fired up without the rain, thunder and lightning? That’s yet another question that will be answered as the forecast in the Richmond, Virginia, area calls for sunny skies and a high of 98 degrees.

The Delta Connection is in Play

Weights in the teens were commonplace and it required over 18 pounds to claim a spot in the Top 10 on Day 1. Just outside that range are two California pros who are putting their California Delta experience to good use as there are plenty of similarities between the fisheries.

Big Break Marina on the California Delta is roughly 2,900 miles away from Osborne Landing on the James River. Still, the two fisheries share plenty of similarities: they’re both tidal waters with big fish potential.

Those similarities greatly helped two California natives, Phillip Dutra (now living in Guntersville, Alabama) and Miles Howe, who find themselves tied for 13th with 17-12. Each scored Top 10s on the Delta in Toyota Series competition and felt very comfortable with the James River on their first trip.

“It’s almost identical to the Delta in regards to the tide, current, and speed of flow,” Dutra said. “The Delta has higher swings, but it’s all tidal fishing and that’s what I love because of how it positions the fish. (On day 1) I I caught them on topwaters, moving baits, flipping, and pitching. It was top to bottom, just like the Delta.”

Howe had a similar feeling when he arrived this week.

“It does fish a lot like the Delta, and I’ve logged many hours there,” he shared. “I know how to chase the tide, which was key for me today. I knew where I needed to be and at what time, so I made my milk run of spots and set up my whole day based on the tides.”