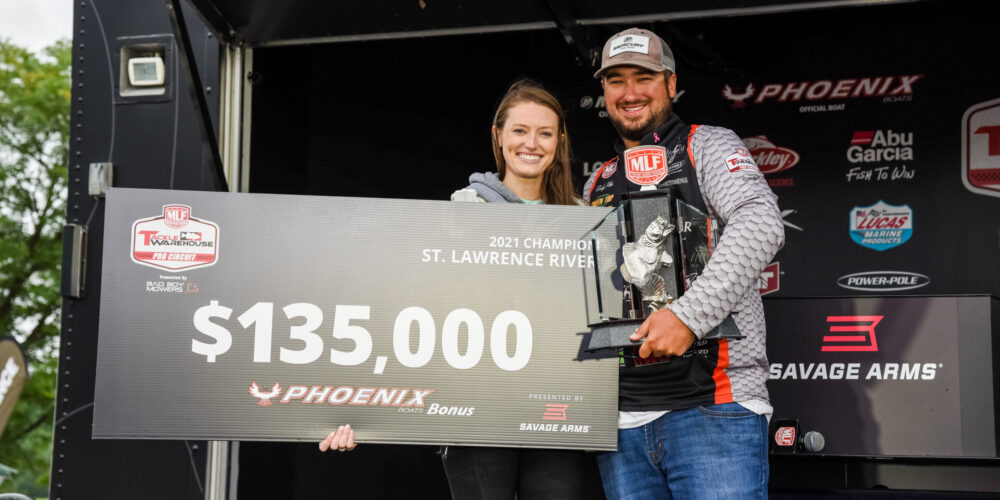 Shocking – that pretty much summed up the final day of the  Tackle Warehouse Pro Circuit Presented by Bad Boy Mowers on the St. Lawrence River.

When the Top 10 took off this morning, everyone pretty well knew the outcome. Joey Cifuentes would ride his near 7-pound lead to victory, while the rest jockeyed for second place. Some 10 hours later, Cody Pike stood on the stage, massive check leaned against his leg, big trophy by his side, struggling to hold back tears and find words for what had just happened.

Because in those 10 hours, what happened was Pike putting together his best bag of the tournament (22 pounds, 3 ounces) while Cifuentes unfortunately put together his worst (12-5). And in one of the most unlikely endings to a season finale, it was the rookie, Pike, who weighed in 82-12 total to take home the win at Savage Arms Stop 6 Presented by Abu Garcia.

“That doesn’t happen,” Pike said of his come-from-behind win. “I was blasting off today thinking it was a two-tournament-type deal: How bad Joey was going to beat us by and who could finish second. I was just trying to finish second. So, I had no pressure. It was out of reach, or so I thought.”

Pike and most everyone else thought wrong.

While both Pike and Cifuentes were fishing deeper structures in similar areas, Pike’s spots were tucked away in between the islands near Eel Bay whereas Cifuentes utilized areas more along the main channel down near Clayton. That proved to be a huge difference, as for whatever reason, Cifuentes and many other pros noticed today the current was less, the water had dropped a little and the wind was pushing out of the east to make conditions difficult to drift the main-river spots.

Meanwhile, being tucked away in the islands – an area he chose because of how well travel partner and Angler of the Year Michael Neal and other Bass Pro Tour pros had done in a few weeks ago during a BPT event – Pike never felt the current was any less and he was far more protected from the wind. That allowed him to simply pick apart his structure.

“I was fishing rock piles about the size of my boat,” Pike said of his key offshore structures. “So, I wasn’t worried about drifting. I was casting right to the rock piles, and I’d get bit my first cast to it because they could see my bait if they were on that rock pile. So, I didn’t need to sit there and beg them to bite. If I didn’t get bit I could just move to the next one.”

Pike rotated between 40-50 rock piles in his area, finding more and more throughout the event as once he had a decent bag each day he’d idle around to find more. And Pike admits, it was the area and spots more than the presentation, as he was throwing just about the same thing everyone else was – a green pumpkin Berkley PowerBait MaxScent Flat Worm on a drop-shot with a 1/2-ounce Eco Pro Tungsten weight and 6- and 7-pound-test Gamma Touch fluorocarbon line.

Unfortunately, smallmouth break anglers’ hearts more than most any fish, and they did for Cifuentes. Of course, knowing their fickle nature and not in any way considering himself a “smallmouth guy,” Pike never would’ve thought those same brown fish would provide the best day of fishing of his life.

“Man, I came here just trying to lock up a spot in the TITLE,” Pike said. “And today, I just was trying to finish second. So to get this trophy … it means a lot. People work their whole lives to try and get [one of those trophies], and I got lucky and got one my first year. That doesn’t happen. Especially not with smallmouth. Man, it’s just awesome.”