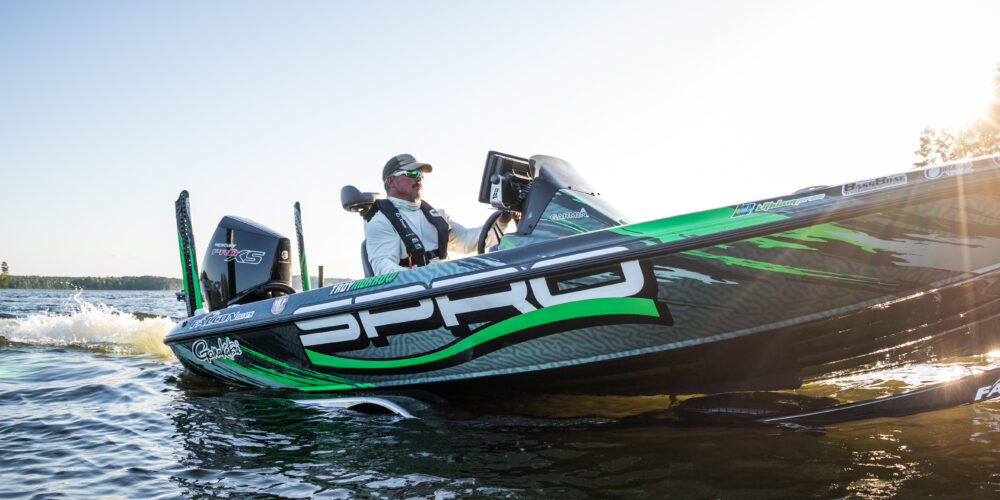 There’s a bit of uncertainty among the pros after two days of practice on Lake Murray for Googan Baits Stop 3 of the Tackle Warehouse Pro Circuit Presented by Bad Boy Mowers. Most of the uncertainty stems from the fact that the bass seem to be in all three phases of the spawn and there’s also a bit of a blueback herring and shad spawn happening. The sum total of which has bass spread out from the bank to 30 feet of water.

Now, that isn’t necessarily a bad thing because, with a lot of fish either moving to or already being on the bank, it puts a lot of the 4- to 6-pound fish that call Murray home up where they can more easily be targeted. Changing weather throughout the event may sway that, but even still, Murray is a heck of a lake to be on in the spring.

Troy Morrow has spent plenty of time learning the intricacies of southeastern herring reservoirs, and though he doesn’t have tons of recent experience on Murray, he’s one of the most knowledgeable anglers in the field to give his thoughts about what’s happening on the Saluda River impoundment right now.

With most of the recent MLF Lake Murray tournament knowledge coming from FLW Cup events taking place in August, hitting the fishery in April is a new take on a semi-familiar body of water. Morrow admits that plenty has changed over the years on Murray and even in the last few years.

While there certainly seems to be less bank grass, there’s still no shortage of places for bass and bait to relate to. From docks to laydowns, there’s plenty of shoreline cover to keep bass feeling comfortable and happy.

As far as the lake goes, water temperatures are anywhere from the low- to mid-60s across the lake. Morrow points out that the water level and color is about normal for this time of year, though he does point out a few factors that could change that.

“You get a lot of tannic water coming down from the Saluda [River], and especially the Little Saluda, so it brings that color down to about [Dreher Island State Park],” he says. “From [Dreher Island] down to the dam is usually a lot clearer. It’s dirtier now that the hydrilla is gone, but it’s still pretty clear. So, the lake is about on par for the time of year, but it does seem a bit high.

“Now, Wednesday it’s supposed to blow and that’s going to make some mud lines off of the clay points. And we have pollen mixing in the water giving it a bit of a milky look. So, it may change a bit, but it still looks pretty good.”

Most of the pros agree that there are still fish to be found spawning, so there will certainly be some fish caught sight-fishing. Several pros even reported seeing fresh fish pull up to the bank throughout practice, so it could be a pattern that holds for a few days. The biggest factor is what the bass will do overnight as temperatures fall into the upper 30s ahead of Day 1.

There are also plenty of fish cruising shallow or guarding fry, so expect to see a Senko, floating worm or big swimbait get a workout this week.

The curveball with Murray being a blueback herring lake is just how far along the herring are in their spawning endeavors. Pros have hinted that the herring spawn is just getting rolling, but are again concerned as to what the cold snap may do to that bite.

“The fishing is off a little bit,” Morrow says of the bite as a whole on Murray. “The magic temperature for the herring spawn is 68 degrees and we can’t quite keep it there. Somebody is going to catch them on a herring spawn, but with that 40-degree temperature at takeoff it’ll knock that down. The stripers will probably bite, but the bass won’t ‘till mid-morning, which is about the end of that bite anyway.”

There is also some shad spawn activity going on, but Morrow believes it is still a bit early for that to really be in full effect.

Murray has plenty to offer from an offshore fishing perspective, with numerous brush and cane piles. While Morrow put effort into locating them and finding postspawn bass that have transitioned out deep, his efforts were in vain.

“I have not found anything offshore and that’s a big disappointment,” he says. “After this first wave of herring fish get done, that’s where they go. Right now, the deepest I can get bit is 10 feet, not out in 15 or 20, which is where a lot of those brush piles are.”

Past events on Murray have seen lots of pressure on the lower portion of the lake. Being that there are so many fish relatively shallow, Morrow thinks more of Murray will be in play.

“I think because fishing is tougher, you’ll see guys spread out,” Morrow says. “There will be one area where the herring bite is going on and guys will be rotating points, but otherwise guys will be on the bank from the Saluda to the dam.”

Despite some pros singing the blues, the fact of the matter is that on a place like Murray where mid- to upper-20-pound bags are common, it should be a stellar week of fishing. Once the clock ticks to 6:30 a.m. ET on Thursday, we’ll see just how good things are on the “Jewel of South Carolina.”