ROY Update: Tracking the Rookies at the Halfway Point 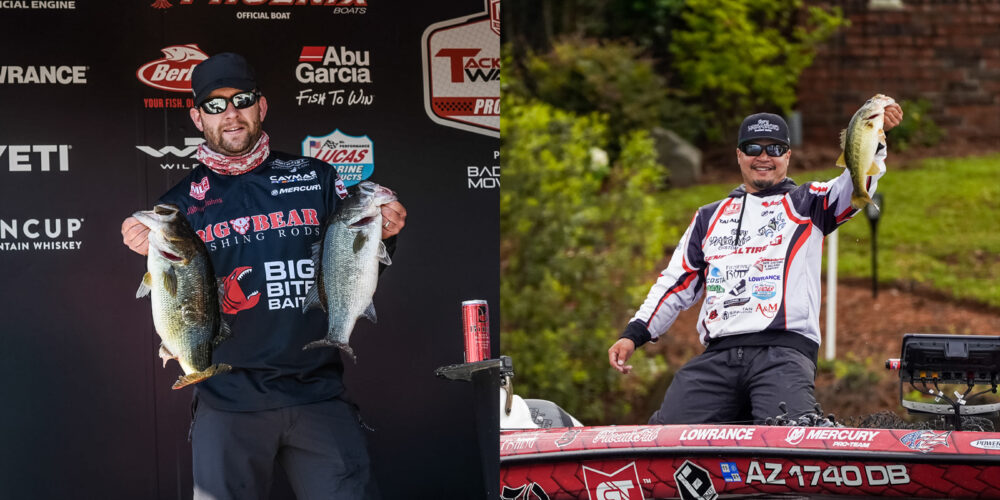 With the Tackle Warehouse Pro Circuit Presented by Bad Boy Mowers season halfway over now that Lake Murray is in the books, it’s high time to dive into the Polaris Rookie of the Year race. Over the years, winning ROY has been a great indicator of future success, and it’s an award you can only win once. Case in point – Matt Becker was the top rookie in 2018 and he just won on Murray.

With the second half of the season heading to Lake Eufaula, the Potomac River and the St. Lawrence River, the rookie pros will be tested in new ways. Eufaula offers some shallow fishing and the potential for an offshore slugfest. The Potomac will introduce tides into the mix and should be a solid shallow bite. At the St. Lawrence, smallmouths will make their long-awaited debut on the schedule.

With a razor-thin lead, Clabion Johns has been the best rookie so far. Finishing 20th to start the year at Lake Okeechobee, Johns followed it up by finishing 90th at Smith Lake and bounced back by finishing 35th at Lake Murray. A great shallow water angler, Johns has leaned hard on his shallow skills this far, but the season has also been one of missed opportunities. Johns was actually in the top five after the first day at Okeechobee and Murray, and he failed to make the final day. In reverse fashion, Johns only weighed two bass on Day 1 at Smith, bouncing back with a limit on Day 2.

Looking ahead, Johns seems to be in good shape at Eufaula and the Potomac. Both fit his style, and he’s got a pile of experience on Eufaula. The tricky one for him could be the St. Lawrence – the closest Johns has come to fishing an MLF event on a smallmouth fishery is Lake Cumberland, which isn’t exactly a 1:1 comp for the St. Lawrence.

Quickly becoming a fan favorite on live, Tai Au started dismally, posting a 135th-place finish at Okeechobee. Since then, he’s made the Top 10 twice in a row and qualified to fish two Bass Pro Tour events. Au has fished exceptionally well on two fisheries where western pros have historically done well and quite poorly in Florida, where many western pros struggle. The rest of the schedule is less paint by number and offers a good opportunity for him to keep the train rolling and really win ROY. Still, Au doesn’t have much eastern experience, so if it stops looking easy for him at some point that wouldn’t be a shock – especially at Eufaula and the Potomac, there are a lot of other anglers in the field who already have money in the bank earned on those waters.

One of the older rookies on tour, Jim Neece Jr. nearly won at Okeechobee, did well at Smith and bombed at Murray. A good offshore angler due to his Tennessee experience, Neece ought to do well at Eufaula. After that, the schedule could get a bit rocky for him. Despite having worked a ton of events for FLW back in the day, Neece hasn’t actually gotten a ton of results to go off. So, it’s hard to say for sure how he stacks up the rest of the season. Still, he and his son Corey are both on tour together this year, which should help as the season continues into more unfamiliar waters, and Neece has had some really good results in recent years – count him out at your own peril.

Finally, we have arrived at the phenom. Starting off rough at Okeechobee, Cody Huff has finished in the Top 20 twice and it’s looking just as good as advertised. Huff has made his name with forward-facing sonar, but so far that hasn’t been his entire game as a pro. It’s a good thing too, as the next few events will require a fair bit of versatility. Back in 2020, Cole Floyd put up a pair of triple-digit finishes to start the year, making it impossible for him to dig out for ROY. Also a Bethel product, Huff may have done enough early to give himself a chance at the title, and he’s certainly done enough to look like the can’t-miss prospect that he is.

Tied by points with Huff, Josh Butler is almost sure to move up in the short term.  A stupendous offshore angler, Butler fished lights-out in 2020 to qualify for the Pro Circuit. Along the way, he notched a sixth-place finish in the Toyota Series event on Eufaula. Like many rookies, however, Butler isn’t a sure thing the rest of the way – the Potomac is going to be at least somewhat unfamiliar for him, and he’s lacking in northern smallie experience. Still, a good finish at Eufaula seems well within reach, and it could set him up for some big things the rest of the way.

Other Rookies to Keep in Mind

By points, there’s a decent gap between the top five rookies and the rest of the field. Both with 405 points, Chase Serafin and Justin Cooper are the next rookies on the list. Then, it’s Jacopo Gallelli with 393 points, Cody Pike with 376 points and Josh Bragg with 372 points.

Of that group, each has some serious potential in the second half of the season. Serafin is the smallmouth expert in the bunch, and he could be hard to handle if he can get within striking distance for the season finale. Gallelli is just flat-out good, Cooper is dynamite offshore, Bragg is a Eufaula expert and Pike is a Potomac hammer.

Historically, the Rookie of the Year standings are pretty volatile, so expect to see some movement the rest of the year. Fishing as a pro is incredibly hard, and the rookie that sails through the year totally unscathed is a rare one.