Scouting the Mississippi with Clabion Johns 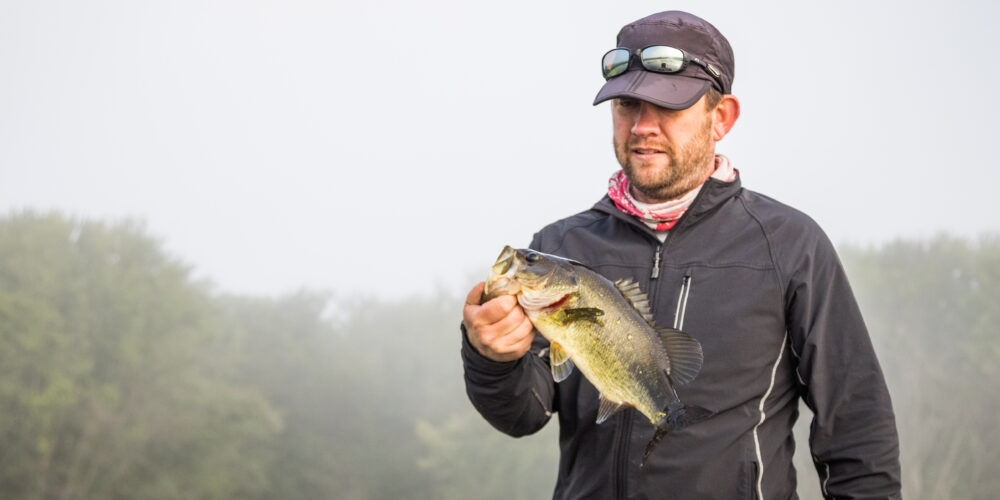 LA CROSSE, Wis. – Hot off the Polaris Rookie of the Year award, Clabion Johns is perhaps one of the best-suited in the field to take on the Tackle Warehouse TITLE Presented by Mercury. A frog fishing savant, Johns rode his shallow water prowess to the ROY title, and he now has a chance at $200,000 on the Upper Mississippi River. Theoretically, it could hardly be set up better for him.

Eager to watch Johns work, I met him in the dark at Veterans Freedom Park in La Crosse to kick off the championship week.

The second boat in the water dark and early, Johns idles out of the Black River while Zack Birge heads upriver. Firing up his graph and Google Earth, Johns has a couple areas in mind to scout right off the bat. With no pre-practice on the river to speak of, Johns isn’t intimidated.

“I’ll go fish a BFL Regional on four hours of practice,” Johns says. “I do a lot of my practice on Google Earth. It’s unbelievable how many bream beds and grass lines you can find.”

After idling out in a chilly fog, Johns puts it on plane for about a minute before shutting down and idling again. After playing it safe for a while in the fog, he spots a likely-looking pocket behind a point and decides to stop.

Popping up on the front deck, Johns grabs a frog and starts slinging, almost sure of a bite on his first cast into an open pocket beside some reeds. The bite does come, and after a few more casts Johns slides into the area to inspect the depth and the grass. Sticking his rod in the water to pull some up, he identifies coontail in the mix and says that he’d like a bit more depth.

So, still socked in by fog, we idle onward for another few minutes before it’s time to fish again.

As he fishes along, I quiz Johns about his strategy for the river. Did he think about locking?

“I 100 percent wrote it off,” Johns says. “In a 50-boat tournament I don’t think it’s worth it, and I would never jeopardize a tournament of this level on getting stuck in a lock.”

What about the new format?

“It kinda benefits me a little bit,” Johns says. “This time of the year, I think I can put very consistent bags up. I’m gonna run a pattern, I’ll piece together enough of those areas, and I don’t think I can really run out of fish.”

After missing a couple of frog bites, Johns is a little flummoxed and not totally loving the area we’re in.

“I’m not going to spend too much time up here,” he says. “I’m already getting the vibe I can’t move around as freely as I want to. There might be tournament-winning fish up here, but could you get to enough of them in a day?”

Johns probably has more frogs on deck than anyone else in the field. One side of his deck is dedicated to swim jigs, vibrating jigs and other baits. The other is completely covered up with frogs, with everything from common popping frogs to outdated, Japanese frogs Johns can’t get anymore. For Johns, a frog is a perfect bait – the big hooks make landing properly hooked fish a breeze, and he’s developed enough ways to fish them that he reaches for a frog when someone else would reach for a buzzbait or a plopping topwater.

Eventually, having missed a couple fish and worked his way into a bigger backwater, Johns sits down to tie on some new frogs. Adding a mat frog and a few fresh colors into the mix, he’s now double ready for the Mississippi. The reset quickly proves worth it as Johns boats his first keeper of the day out of a mat of duckweed.

“I think that’s how it’s going to be,” Johns says happily. “If I hit enough spots, I won’t have to talk fish into biting.”

Continuing through the Mississippi maze, Johns tells me how excited he is to make fishing his full-time career on the Bass Pro Tour and the Tackle Warehouse Pro Circuit.

“I helped run some of the largest southeast children’s consignment sales,” says Johns, who first started in life selling cars. “We’d have events that are 30,000 or 40,000 square feet, and running 15 cash registers at a time. The last 20 years of my life I’ve fished a lot, but now, all I’m going to do is fish.”

Johns isn’t afraid to share an opinion or two. A tournament veteran, he has won money throughout the Southeast. Having learned to fish offshore in his youth, he’s spent most of his life fascinated by the shallow bite. As such, he doesn’t care much for the recent forward-facing sonar boom.

“I won’t put it on my boat, because it’ll change the way I fish,” Johns says. “I don’t want to ever be looking down and not reading the water. There are tournaments where it’s unbeatable, but I can find a shallow hungry bass and do well a lot of the time, even if I might not win. I’m not saying it’s a bad thing, I’m not saying it’s not a great tool to catch a bass, but I don’t think it’s good for the sport, I don’t think it’s bringing people into our industry and into our viewership.”

Moving up the river a bit more, Johns is starting to figure out the bite isn’t what he wanted it to be.

After another short move, Johns spots fellow rookies Tai Au and Lawson Hibdon. After getting a swirl or two from a few fish that aren’t bass, he’s off to another area.

“I don’t need to see any more of this,” Johns says. “With that many people up here, that means this guy is not.”

Turning and burning down the river, Johns pulls into a likely looking backwater and busts out the frog again. After fishing around the mouth with no success, he slides deeper into it.

“I was kinda expecting this place to have massive numbers of fish, but catching a big one would be hard,” Johns says. “I’m not really feeling that way now, but we are just coming off some violent water level fluctuations. When the river came up they probably got all excited and went into the shallows. But I don’t like it when it’s falling fast.”

Working back, Johns swings and misses on another fish or two and is able to eye up a couple of quality bass in the grass.

“This is unusual on a good frog bite,” Johns explains. “It’s like they’re taking the bait and moving, but not getting it all. I’m waiting for them to move, I should be hooking them, I bet it was a little pike, I bet that’s what it was.”

Heading back out to the front, Johns grabs a swim jig to prospect in the deeper water a bit. He quickly hooks into a pike, then another. It’s not what you want.

After moving down the river again, Johns eases into another backwater and fires the frog around until he runs out of water, this time with zero bites to show for it.

“I’m coming to the realization I might have to fish how I don’t want to fish,” Johns admits. “They’re in the mats, and I really want to fish the small stuff.”

After one more stop, Johns burns it back up to the ramp to drop me off and start the day again. The morning hasn’t lacked for bites, but most of them haven’t made it into the boat, and so far Johns really only feels good about one area.

“That’s the thing about when you come to a place. You’ve got to look at areas and develop a pattern. I think I’ve got a pattern, I need to find some more areas.”

If the rest of the 2021 season is any indication, Johns is likely to find some more areas and then some. After all, you don’t finish seventh in the points by accident.