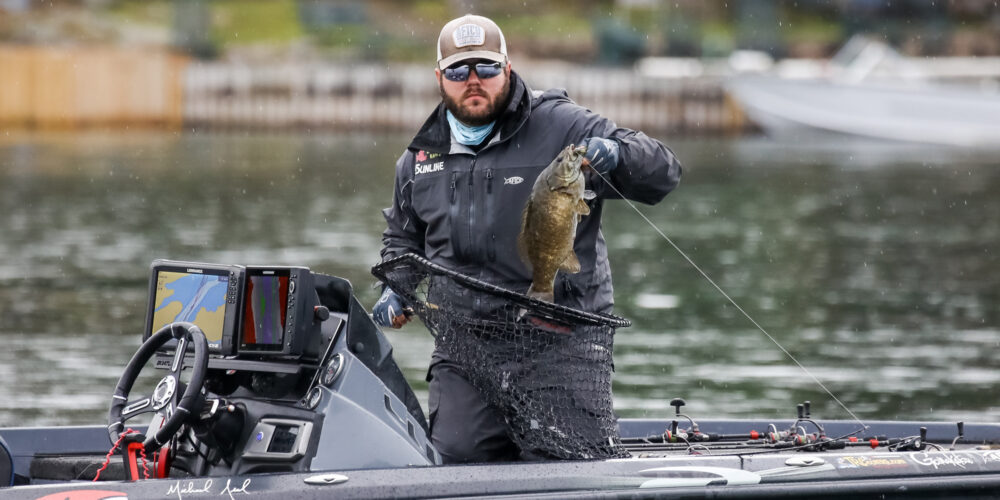 The recipe for competing in tournaments on the St. Lawrence River isn’t all that complicated. Smallmouth reign supreme, and catching them is usually a matter of finding the right areas in which to use a drop-shot, Ned rig, spy bait or similar finesse presentations to go to work on the river’s abundant population of big smallies.

So far on Day 1 of the Tackle Warehouse Pro Circuit Savage Arms Stop 6 Presented by Abu Garcia, that’s what we’ve seen from just about every pro in early contention. Largemouth might get you a check, but it’s 4-pound-class smallmouth that’ll have you fishing on Championship Sunday.

Unfortunately, as stellar as the St. Lawrence River usually is, clouds and intermittent rain this morning seem to have the fishery’s smallmouth population biting a little funny, at least according to Michael Neal, who currently sits in seventh place with 18-12. “Biting funny” gets you nearly 19 pounds on the St. Lawrence, which says pretty much all there is to say about the river’s quality and quantity.

Still, Grae Buck, who’s no stranger to smashing smallmouth and cashing checks on Northern waters, had similar things to say about his fish’s behavior this morning. Buck says he has three spots he “figured he’d crush them” first thing today but the weather has them acting much more finicky than expected. Last time we checked on Buck, he had two in the livewell for about 5-8, though it’s safe to assume he probably has more than that now.

Unsurprisingly, the Berkley PowerBait MaxScent Flat Worm has been the overwhelming drop-shot bait of choice across the field today. Our on-the-water team reports having seen nearly every pro with a drop-shot rod in their hand having a Flat Worm at the business end. In other even-less-shocking news, Tom Monsoor has been relying on a 3/8-ounce swim jig to catch his 19 pounds, which is good for sixth place right now. His bag consists of a decent largemouth and a quartet of smallies.

When it comes to Northern smallmouth derbies, you’d be crazy to not have last year’s Pro Circuit AOY Ron Nelson at the top of your contender’s list. The Michigan pro has been doing what he does best so far, and he’s got 19-8 to show for it.

Interestingly, Nelson was spotted with a flogger in hand earlier and working on a 5-pounder, presumably on a bed. If anyone is going to find 5-pounders on beds this week, my money’s always going to be on Nelson. He also had a comical catch earlier in the form of a 4-pounder that he nearly lost several times – once on his trolling motor – while giving our on-the-water coverage team the play-by-play.

One of the most intriguing storylines of this event is the Angler of the Year race – and in particular, Skeet Reese’s and Michael Neal’s involvement. The pair of Bass Pro Tour hammers were separated by just 21 points heading into the final tournament of the regular season, with Neal holding the slight advantage. On one hand, 21 points isn’t much of a cushion. On the other, it’ll be hard for either pro to create any separation if all goes well this week, especially with Neal having (unofficially) 18-12 in the box so far and Reese with a limit of his own (though he’ll need to do some upgrading to keep the pressure on going into Friday).

The unofficial leaderboard changes nearly every minute in derbies such as this, but as of the time of this writing, Joey Cifuentes has the lead with about 22 pounds. Behind him, Erik Luzak has 20-8 and Matt Stefan is unofficially in third with 20 pounds even. These are unofficial weights, of course, but it’s safe to assume the top 25-plus pros – and maybe more – are going to be at least flirting with the 20-pound mark come weigh-in time.

Be sure to visit MajorLagueFishing.com at 3 p.m. ET for the live weigh-in to see how Day 1 shakes out, and join us on Saturday and Sunday all day for full live coverage of all the action on MLF NOW!.