The Season Starts on Sam Rayburn 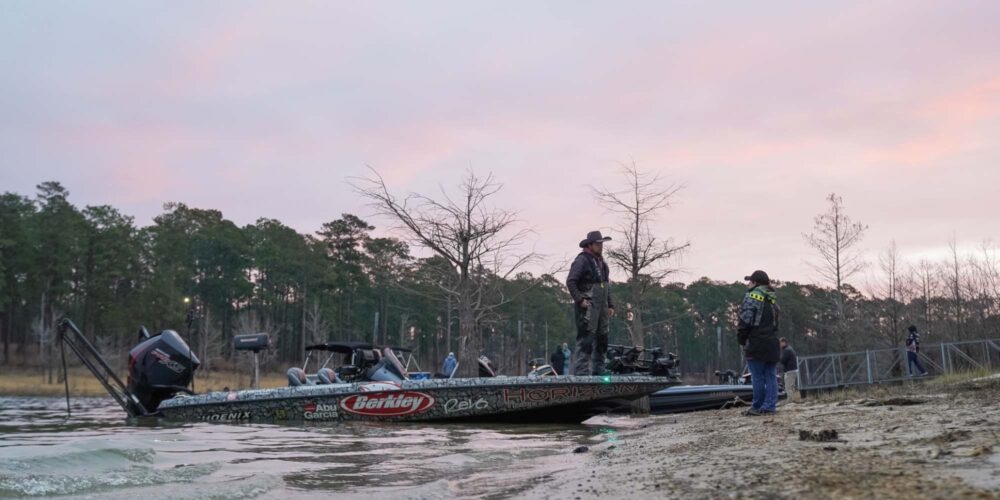 Chilly and clear weather greeted the anglers on Day 1 of the Tackle Warehouse Pro Circuit Presented by Fuel Me season opener on Sam Rayburn Reservoir. With 158 pros ready to roll, Guaranteed Rate Stop 1 Presented by Ark Fishing has started without a hitch, and the only thing left to do is get to catching.

Setting Up the Season

This year, there are a few notable changes for the Pro Circuit. The first is that MLF NOW! live coverage has been extended to all four days of the events. So, you’ll be able to watch Dicky Newberry, Nick LeBrun, and more in action from the get-go and follow the leaders all the way through.

The second change is rules-based – now, on the final day, the Top 10 will start with zeroed weights. The leadup will be the same, with five fish and all the usual weigh-in pomp, but this year, the final day is really what matters. On Rayburn, that might mean someone saves the best for last, which could mean some truly spectacular catches if things lineup right.

Of course, not everything is new. The field is still stacked, and Sam Rayburn is her usual wintertime self if a little lower than normal. So, with gameday finally upon us, we caught up with a few pros to get the final report on practice and set the table for the tournament.

Offshore Is the Ticket According to Hays

Embarking on a dual schedule of both the Bass Pro Tour and the Pro Circuit this year, Dylan Hays is starting on pretty familiar ground. Hailing from Arkansas, he’s banked a lot of days on Rayburn over the years.

“Practice was pretty challenging,” Hays says. “I’ve been here a few times this year, so I had high hopes, but it is a very different lake than any time we’ve ever been here. Last time, it was somewhat a similar water level, but now there’s a fraction of the grass. I almost think someone who has never seen the place has a bigger advantage than someone who has been here, as far as trying to fish shallow. It’s not that fish aren’t biting, they’re just not in places they normally are.”

With the lack of grass, Hays is pretty convinced an offshore game plan will win, but he’s planning on keeping his options open.

“I’m gonna do a little bit of both, I never got on anything super strong,” outlines Hays. “I found a couple groups of fish I’m going to try to catch, but I’ll probably spend half my day practicing, just because I never found anything so good that I shouldn’t look for something new. I think it’s going to be won offshore, but you might cash some checks up shallow. But, if you see someone crack 30 pounds or something, it’s not gonna be under 12 foot.”

Not the Same Old Rayburn for Cortiana

Back in 2019, when the lake was flooded, Kyle Cortiana caught bass on 29 consecutive casts one of the days. He’s pretty sure that’s not going to happen for him this time around.

“The fish are all over the place, I got here in December, and it was mid-60s, and fish were active, you could catch them pretty good,” Cortiana says. “Now it’s down into the low 50s, so that’s a big change. The fish have scattered a lot. I think there are fish shallow in the grass, I don’t think there’s a lot to be caught there, I think it’s hard to get bit there, but with the weather trending, I think it will get better.

If the pros could throw an umbrella rig, Cortiana says a slugfest would be imminent. Even limited to normal baits, he’s still planning on making a go of it out deep.

“I’m gonna start looking at ‘em, using forward-facing technology to key in on fish that are chasing bait balls. On channel bends, points, things like that where bait is pushed up,” Cortiana says. “There’s fish on all of it, and they’re catchable, but you’ve got to predict where they’re going. They’re swimming fast, and if you don’t get them going the right direction, you’ll make about 12 casts before you hit him.”

Veteran pro, Jim Tutt is one of the few in the field with plenty of Rayburn experience. He acknowledges that the fishing is a bit tough, but is happy cooler weather finally came in to move fish into more of a wintertime pattern.

“I came down right before cutoff and fished the BFL,” Tutt says. “I practiced for three days and fished the tournament and didn’t do very good. I struggled every day. I got four or five bites every day in practice, but the water temperature was 63 (degrees). That’s very warm for this time of year, but since then we had our cold spells, and the water temps now are anywhere from 48-53 depending on where you are.

“It kind of triggered the shallow-water grass bite, I think,” Tutt adds. “The problem I’ve seen, compared to years past, is there’s not a whole lot of grass and it’s shallow. So, it’s getting beat up. It’s take a number and merry-go-round type of fishing.”

With little grass and the majority of the field dialed on where it is, Tutt is thinking a different approach may be the ticket for him this week.

“Me, personally, I’m going to something different than I’ve ever done on this lake and I’m going to fish deep,” Tutt says. “I tried to get away from history and look at some off-the-wall stuff, but that wasn’t really working either.”

Rookie River Lee lives just 25 minutes from Rayburn and usually spends about half the year fishing and guiding on the lake, so he’s got a pretty good vibe as to what is going on. With the two previous Pro Circuit events on Rayburn being won by a single pattern mostly, Lee doesn’t think that’ll be the case this time around.

“You’ll see more of a mixture of things because I don’t believe there will be one dominant thing,” the 21-year-old pro says. “There’s not much grass, so not everybody can just go fish it and do well. The offshore fish will come into play. There’s still a lot of fish in that winter stage and there’s still a lot of fish chasing bait. I think the winner will do a mixture of all of it, especially mixing in the grass and offshore. If somebody can figure that out and get it going, they’re going to be good.”

Lee admits the two days of practice weren’t the best for him like it was for a lot of the pros, but he thinks some consistent weather could help turn things around.

“Our weather from here on out seems pretty stable, we might get some wind that could be a factor, but the weather itself will be stable, which is good,” Lee says. “I know the rain made the backs of the creeks cold, so if you go further back into the creeks the water drops into the high 40s and it’ll kill some of the grass bites. But for the most part, the weather this week should be good.”

Taking off from the Umphrey Family Pavilion at 7 a.m. CT, the full field of 158 anglers compete in the two-day opening round on Thursday and Friday. The top 50 pros, based on their two-day cumulative weight will advance to Saturday. Only the top 10 pros, based on the cumulative weight from the first three days, will continue competition on Championship Sunday, where weights will be zeroed and anglers will compete in a one-day shootout for the grand prize of up to $135,000, including the lucrative $35,000 Phoenix MLF Bonus for qualified anglers.