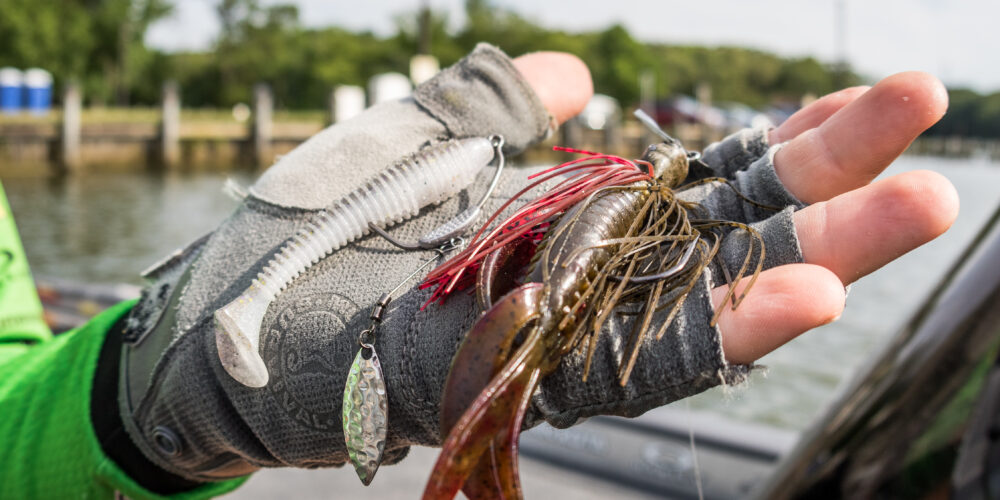 As expected, there weren’t many wild cards when it came to baits in the Tackle Warehouse Pro Circuit Presented by Bad Boy Mowers event on the Potomac River. The field in the Federal Ammunition Stop 5 Presented by Lucas Oil largely stuck to the basics, and the top pros mostly played slight variations of the historically successful baits on the Potomac.

Here’s what they used.

1.  Jacopo Gallelli blew the field away on the final day with a Z-Man Evergreen ChatterBait Jack Hammer in Hite’s hot craw with a matching Berkley PowerBait Pit Boss for a trailer. He also used a 2/0 BKK Titan DIVER hook rigged with a 3.3-inch Keitech Swing Impact FAT swimbait.

2. Coming tantalizingly close for the umpteenth time in his career, Michael Neal relied on a few baits. Chief among them were a Z-Man Evergreen ChatterBait Jack Hammer with a Big Bite Baits Kamikaze Swimon trailer and a SPRO E Pop. Neal also boxed a few on a swim jig and a buzzbait.

3. Speaking of folks that have come close to a win … Cody Meyer did his damage with a 3/8-ounce Z-Man Evergreen ChatterBait Jack Hammer trailered with a Yamamoto Zako and a 3/8-ounce Evergreen Grass Ripper swim jig with a Yamamoto Paddle Tail Zako. For both baits, he rolled with a 7-foot, 3-inch Daiwa Tatula Elite rod in the medium-heavy Brent Ehrler model with a 6.3:1 Daiwa Steez A and Daiwa J-Flouro Samurai line in 18 pound for the ChatterBait and 16 pound for the swim jig.

4. Ricky Robinson did the bulk of his damage on one black and blue vibrating jig from Driftwood Custom Baits with a 6/0 hook. Trailered with a matching YUM Christie Craw, and sometimes a Driftwood Craw, Robinson caught 18 of his 20 bass on the vibrating jig.

5. Tidal stalwart Adrian Avena caught some fish in grass and creeks and many of his better fish on hard cover. For flipping to cover, he went with a black, ½-ounce All-Terrain Tackle Rattling A.T. Jig matched with a junebug-colored 3-inch Berkley PowerBait Pit Boss. On the topwater side, Avena used a 5/16-ounce Accent Jacob Wheeler Buzzbait with a 3-inch Berkley PowerBait Pit Boss in black and a SPRO Bronzeye Poppin’ Frog in natural red.

6. Justin Cooper made his second Top 10 of the season largely with a 3/8-ounce vibrating jig trailed with a junebug-colored V&M Baits RC Craw he trimmed the sides off. He threw it on a MHX CB906 blank that his dad shortened by 3 inches for him, a 7.3:1 gear ratio Daiwa Tatula and 18-pound Sunline Sniper.

Cooper also added a few fish on a frog, a V&M Baits Swamp Hog and a swimming worm.

7. After leading the first three days, Lawson Hibdon dropped down in the standings on the final day. He fished a bevy of baits on the week including a weightless Berkley PowerBait MaxScent The General, a homemade 5/16-ounce jig with a Zoom Z Craw Jr. and a 3/8-ounce Z-Man Evergreen ChatterBait Jack Hammer with a Z-Man Razor ShadZ trailer.

8. Seining grass for most of his fish, Shin Fukae did his damage on a Neko-rigged Yamamoto Senko and a 3/8-ounce Z-Man Evergreen ChatterBait Jack Hammer trailered with a Yamamoto Zako.

10. Wrapping up his first Top 10 in the Pro Circuit, Josh Bragg used a few different baits. One of his bread-and-butter options was a 4-inch Megabass Spark Shad in green pumpkin on a 3/16-ounce Trokar Swim Blade hook. He also mixed in a  Zoom Magnum UltraVibe Speed Worm in tilapia magic with a 1/8-ounce weight and a Megabass Uoze Swimmer Swim Jig with a Zoom Super Speed Craw.