Top 20 Set for TITLE Knockout Round 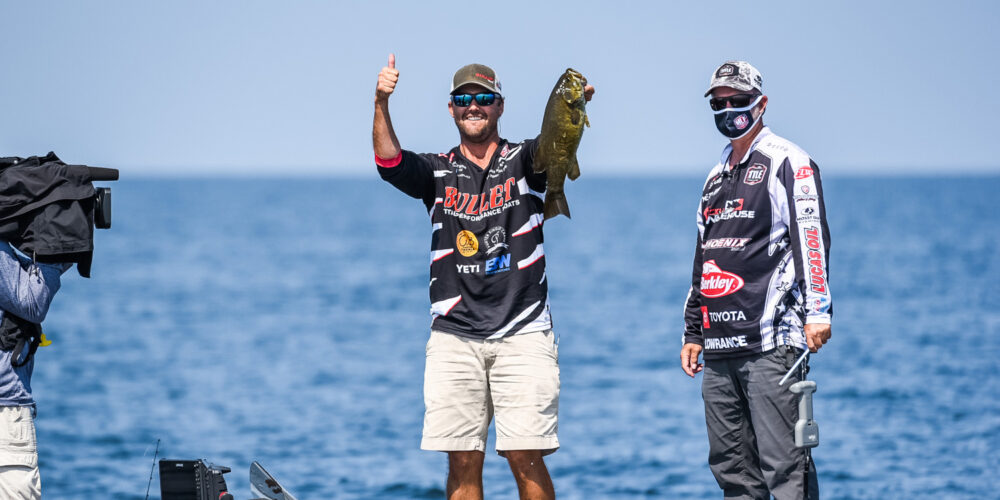 STURGEON BAY, Wis. – The official name of the competition round that played out Thursday on the fourth day of the Tackle Warehouse TITLE presented by Toyota is “Qualifying Round,” but in reality, the name “Back Against the Wall Round” is probably more fitting.

As was the case during Wednesday’s Group A final Qualifying Round – in which the round winner caught only 8 pounds on the day and the 2020 Angler of the Year squeaked into the Top 10 by the skin of his teeth – the pressure of the multi-round, pressure-cooker Major League Fishing competition format instigated multiple storylines up and down the 25-man Group B lineup.

It started with the conditions, which resulted in roughly 20 percent more scorable fish making it onto SCORETRACKER® than the previous day. That extra productivity influenced the day’s competition by more than 150 pounds overall, opening the door for bigger moves in and out of the Top 10.

“Today was a big-time-perfect smallmouth day until it slicked off calm in the afternoon,” said FLW Live analyst Marty Stone. “There was some residual chop from Wednesday night – a nice smallmouth chop. Plus, anytime you get that wind like we had on Wednesday, it kicks the algae bloom away and cleans up the water. We had a good morning feed, the sun came out earlier, and it turned into that perfect smallmouth day. Guys were seeing those big schools, but instead of getting one or two bites, they could get multiple.”

In the end, 10 anglers survived the round to continue on to Friday’s Knockout Round, where they’ll join the Top 10 finishers in Group A for a 50/50 shot at the TITLE’s Championship Round on Saturday.

How to Watch Live

The Tackle Warehouse TITLE Presented by Toyota continues Friday as the Top 40 fishes the Knockout Round.

FLW Live will be available at MajorLeagueFishing.com. The live coverage will run from 7:45 a.m. CT until 4:45 p.m. CT each day of the event.