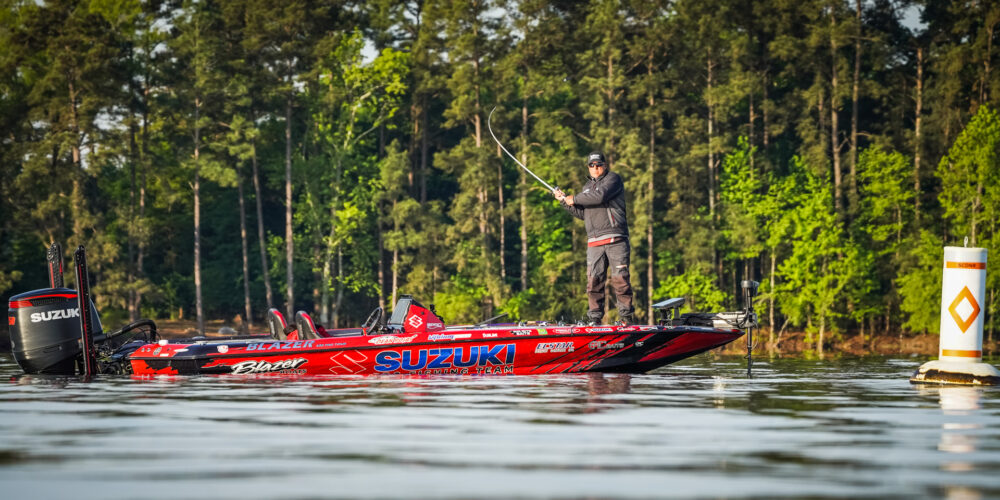 Through two days, it’s basically a roulette wheel of patterns working on Lake Murray. Tomorrow, the wheel gets another hard spin thanks to Mother Nature.

The top five of the Tackle Warehouse Pro Circuit Presented by Bad Boy Mowers event has anglers in it fishing from the dam to far up the Saluda rivers, and doing all different patterns. Thus far, Matt Becker’s risky schooling-fish pattern has reigned supreme.

Yet, the real question is whose pattern will hold up against the significant storms set to hit the area tomorrow … if any.

The lone angler to top the 20-pound mark today, Derrick Snavely has been “flip-flopping between a worm pattern and herring-spawn pattern.” And today, the duo scored early.

Whether he’s out on the points or tossing a worm (multiple riggings), he says he has 20 rods on his deck and is catching fish on many different lures. Though, at least for the herring-spawn pattern, he admitted he has a couple techniques he’s utilizing he doesn’t feel anyone else is using.

As for tomorrow, Snavely may have a plan to deal with the weather, but may not.

Considering he’s lost a 6-pounder each day, it’s remarkable that Miles Howe finds himself in the top five. Then again, having a solid plan has definitely helped.

While his morning reaction bite fizzled today, he was able to quickly catch a limit focusing on fish spawning or guarding fry. And then he started camping.

“Once I get a limit, I start fishing a little different,” says Howe. “I know some areas the fish are coming up on eating herring, and I will sit there on one point for hours to get one bite an hour. But that one bite is the right bite. Those two big ones I caught today came that way.”

Of course, all game plans may go out the window tomorrow with the weather, and Howe is certainly concerned about that.

“Today, when the wind stopped, the fish never came back up on the points,” says Howe. “The wind will help, but I need sun. So I really don’t know what to expect because I don’t really know bluebacks.”

When his first fish of the day was a kicker 4-12, Evan Barnes knew he was getting paid. And when his second fish was a 5-3?

“I’m like, ‘there’s an opportunity to have an awesome day,’” says Barnes.

Overall, it was an awesome day for Barnes, who is keying on bedding fish and fry gaurders far up the river. But it could’ve been something truly special if he hadn’t missed what he’s pretty sure was an 8-pounder that never quite got ahold of his frog.

Still, he’s put himself in great position and is actually optimistic the weather could make his shallow topwater bite even better. Then again …

“It could also make it much worse,” says Barnes.  “I think for me, with the fish being on beds, I don’t know if they’ll be aggressive enough for what I’m doing with the rain and the wind.”

Few pros know the importance of adjustments as a veteran like Dean Rojas. And he’s planning a number of them after today.

“It was a little bit tougher today,” says Rojas. “I didn’t have a 6-12 to help me like yesterday. That helps out a lot. But I think my stuff is waning. So I need to make some adjustments, especially with this weather coming in.”

While he has been mixing up various patterns, Rojas says he’s going to ditch everything tomorrow and just “play the weather and the conditions.”