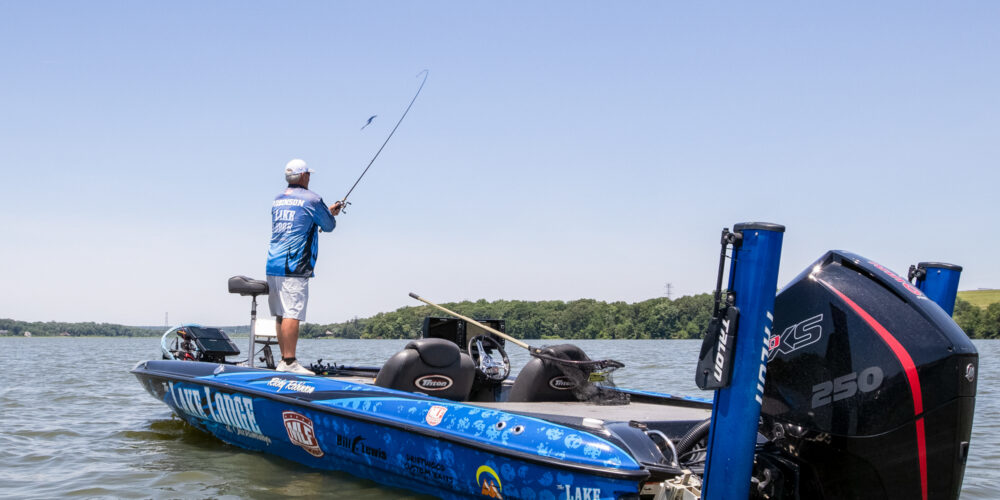 While Lawson Hibdon has dropped a pair of extremely impressive bags for the lead in the Tackle Warehouse Pro Circuit Presented by Bad Boy Mowers event on the Potomac River, the folks chasing him are no slouches. Good fishing is absolutely the story of the Federal Ammunition Stop 5 Presented by Lucas Oil, and each of the top pros is doing it big in their own way. Bags over 16 pounds aren’t wild this week, which means the comeback potential is high and the highlight potential is even higher.

Here’s how the pros chasing Hibdon are putting them in the boat.

The pro sitting in second is probably the scariest in the top 10 for the rest of the field. With a pile of history on the Potomac and an affinity for tidal water and similar fisheries, Adrian Avena is looking dangerous after tallying 16 pounds on back-to-back days.

“Today honestly went better than yesterday did,” Avena said. “I caught a lot more fish, a lot more quality fish. Yesterday I was boat 155 or whatever, so didn’t get to start where I wanted to start. Today I got to start where I wanted to start and I caught 12 pounds in 20 minutes. Then I went head hunting. For that, I fished hard cover, to me, that grass bite is so inconsistent on big ones, so I just fished a lot of hard cover and a lot of history.”

Starting in grass, Avena tallied a bunch of keepers and two of the fish he eventually weighed. He also didn’t have to re-fish any water from Day 1, relying instead on fresh water and bass to edge ever closer to the top spot. Fishing mostly mid-river, you’d think the New Jersey pro would be utilizing a lot of his tidal wiles, but he’s instead flipping through his Potomac history.

“The tide should be getting better, but I’m not fishing a pattern that’s really tide-dependent,” Avena said. “I have a starting area and places I’d like to be on a lower tide, but I feel like those are limit holes. I don’t think I’ll catch 3- or 4-pounders doing that. I feel like if I’m gonna catch big ones it’s going to be on hard cover and I’m not really too worried about the tide.”

Tide or no, Avena is poised to make some noise this weekend.

Waylaying the biggest bag of the tournament on Day 2, Ricky Robinson charged to the top with a giant 18-12 catch.

“First thing this morning, I made about six casts, never got a bite,” Robinson said. “Then I draw back, throw it over to this one spot and the jig didn’t fall a foot, and that was the 5-2. Then about 15 minutes later, I caught another that my scale said weighed 4-8. Then I caught another keeper and just started moving around. I fished the same places I did yesterday – yesterday I caught probably three limits of 2-pounders. Today there wasn’t as many bites there, but they were bigger.”

Fishing grass in one creek, Robinson says he’s barely cranking his motor once he arrives to the fishing grounds. Not throwing anything special, he’s just sacking up the fish and feeling good. An angler born and raised on the Tennessee River, Robinson doesn’t care about the tide, but loves the moving water.

Still, he’s not the only pro in the area, and he’s not 100 percent sure that the fishing will keep being as good as it has been.

“I think it’s getting burnt, but I still think there’s enough fish in there to win this tournament,” Robinson said. “There’s some fish in there, there’s some quality fish. I’ll be happy if I can come in with a good bag tomorrow.”

The veteran of the bunch, Zell Rowland is in a sure enough groove this week. Putting another good limit on the scale on Day 2, Rowland is catching enough fish that he’s happy to throw back small keepers before he’s filled his limit.

“I’m happy with 15 pounds, I only had one fish come off today, and it would have helped me,” Rowland said. “We’ll see what happens, I’m going to lean on them more tomorrow. I’m looking at Dion’s boy (Lawson Hibdon) – he’s catching them out in the middle and I’m on the bank, I wish they would all swim back to the bank.”

Fishing shallow and not really in grass, Rowland has things pretty dialed,

“I can catch another 15 pounds tomorrow,” Rowland said. “I just need one of them decent bites to have 16 or 17. I haven’t really had that bite, what’s amazing is the numbers I’ve caught every day – I left there today around 11:30 and I had caught 20 to 25 keepers. There’s an awful lot of fish in the area I’m fishing in. They’re looking for shade and I’ve got the perfect stuff for the shade.”

One of three rookies in the top five, Josh Bragg is in the midst of his breakout tournament. Fishing grass, Bragg is running a bit more than some and got some good bites on Day 2.

Running from Pomonkey to below Chicamuxen, Bragg says he’s fishing very specific places and patches in the grass. Catching about 10 keepers each day, he’s got things going pretty well.

“I’m just throwing a swimbait, just a Megabass Spark Shad on a Texas rig,” Bragg said. “I’ve had opportunities both days to have a better bag then I had. I don’t know quite why, I need to figure that out, but I lost two yesterday and one today that would have boosted my bag up.”