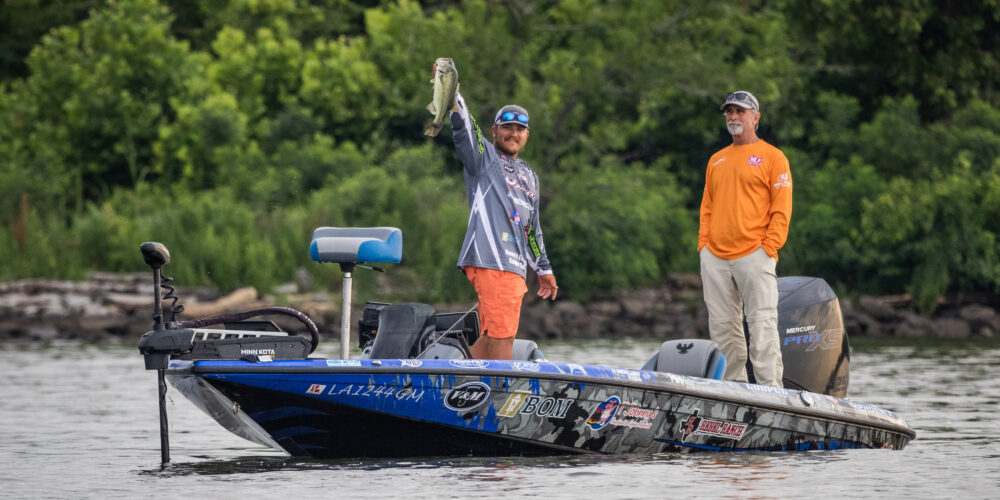 The third day of the Tackle Warehouse Pro Circuit Presented by Bad Boy Mowers on the Potomac River was unquestionably tougher than the first two, but it was also more uneven. Big bags were there throughout the Top 50, but the Top 10 generally had a surprisingly tough time. In fact, some of the pros who seemed to be the most in tune with the river struggled (Adrian Avena chief among them) and other pros simply couldn’t put good bites in the boat, as Josh Bragg dumped a 3-pounder on MLF NOW! midday and David Walker managed to lose at least a 15-pound limit.

On the final day, the pros will have plenty of time to fish falling water in the morning, with the low tide set for about 10 a.m. ET, and hopefully less fishing traffic. A number of local tournaments kept the pros on their toes today, but having just the Top 10 on the water should free things up a bit.

One of the folks that had a tougher day was leader Lawson Hibdon, so it sure looks like the final day could be dramatic.

Here’s how the top pros are catching their fish.

One of the most notably snakebit pros around when it comes to a big win, Michael Neal is once again in contention on the final day. Tallying 16 pounds on Day 1 and then two bags over 15 pounds, the “Reel Deal” is right where he needs to be.

“It’s been good,” says Neal. “The first day was phenomenal, I laid off them by 10 o’clock. The second day was a little tougher, I laid off of them by 3 o’clock, and today was really tough. I wound up leaving my primary area with zero, went and caught a limit, came back and culled all but one out. So, they’re still there, the size is there, but there have been a ton of fish caught.”

Catching his early limit out of a creek, Neal’s bread and butter has been an eelgrass and milfoil flat that he’s mined with a vibrating jig. Today, he caught a few on a popper, which might bode well for tomorrow.

“I caught three that I weighed-in on the SPRO E Pop today,” says Neal. “I’ve had it tied on all week and threw it here or there. Maybe if I throw it a little bit earlier tomorrow around the low tide it will make a difference.”

Still, new bait aside, Neal is a bit worried that he’s done too much work on his main area.

“I had the bites to win here the last time on the final day,” says Neal. “If you’re within 3 pounds here it’s doable. But, I’m going to have to mix in some new water and I’m not sure where to do that. I’ve fished everywhere else I thought I had fish found, and they’ve been very unproductive areas.”

Speaking of staple pros without a win, Cody Meyer is the current poster child for missed chances. He’s also apparently a Potomac expert, having booked a trip to the Top 10 in the last two events he’s fished on the tidal river.

“I grew up fishing northern California, and the California Delta is very similar to the Potomac River,” says Meyer. “Now, I don’t have a ton of experience on the California Delta, but one thing I do know. I’ve made some Top 10s there, and when I have, I got into one or two areas, put the trolling motor down, fished around those areas and never even looked at the tide. Practice, the tournament so far, not one time have I glanced at the tide. I just want to get into a couple areas I know there’s fish and fish through the tide cycle.”

Those couple areas are Mattawoman and Leesylvania, and Meyer is simply bouncing back and forth between the two, mostly winding a Z-Man Evergreen ChatterBait Jack Hammer with a Yamamoto Zako for a trailer.

“I haven’t put gas in the boat yet,” says Meyer. “I’m literally running from there to here.”

A definite wild card in the top five, Justin Cooper has pieced together his bags each day from Belmont to Aquia, doing a little bit of everything along the way.

“It was another blessed day, that’s all I can say,” says Cooper. “I feel like I’m making the right decisions and trusting my gut. Honestly, that’s the best thing a fisherman can do – trust his gut. In the past couple tournaments I had where I didn’t do well, I didn’t trust my gut and I was spending too much time on certain stuff. This one, I’m fishing freely.”

A good example of his free approach is the morning of Day 3. After starting where he finished Day 2, Cooper boxed a keeper and a 3-pounder in the grass. Then, he slid to a likely looking duck blind and filled his limit with a popper and a wacky rig. The rest of the day, he kept making the right moves, staying away from the backs of creeks that helped him the first two days and instead running his best places in the grass.

At one of his better spots in Aquia, it took some doing, but he finally hit it at the right time for a good fish.

“That spot is really tide related, it seems like it’s best on a higher tide,” says Cooper. “I circled back through it, hit a couple deals, and right before I had to go I hit it again. Soon as I pulled up, second cast, I caught a 3-pounder.”

Primarily winding in grass, Cooper thinks he’s around good quality. Tomorrow he’ll take a shot at the biggest win of his career.

“I didn’t mess with the creeks today,” says Cooper. “I knew if I was going to have a shot to make Championship Sunday I was going to have to catch them in the grass. I’m around them, but I’m worried about some pressure. If I don’t have any pressure on my areas and I can get the bites. I can make a run at this thing.”

Walloping more than 18 pounds on Day 2, Ricky Robinson couldn’t quite back it up on Day 3 and tallied only 13-4 on the day.

“I fished in the same spot all three days,” says Robinson. “It’s a 250-yard section. I start in the morning at a discharge, and then I just go back and forth. I haven’t done anything different, but yesterday there were big fish on it.”

Covering grass with a black and blue vibrating jig from Driftwood Custom Baits that has a special 6/0 hook on it, Robinson is just grinding grass.

If he can make another big day happen, he might well pick up a win.

“I think there’s enough fish in there to win this tournament,” says Robinson. “They did not bite good today for me. If I can have my area to myself, I feel pretty good about it.”