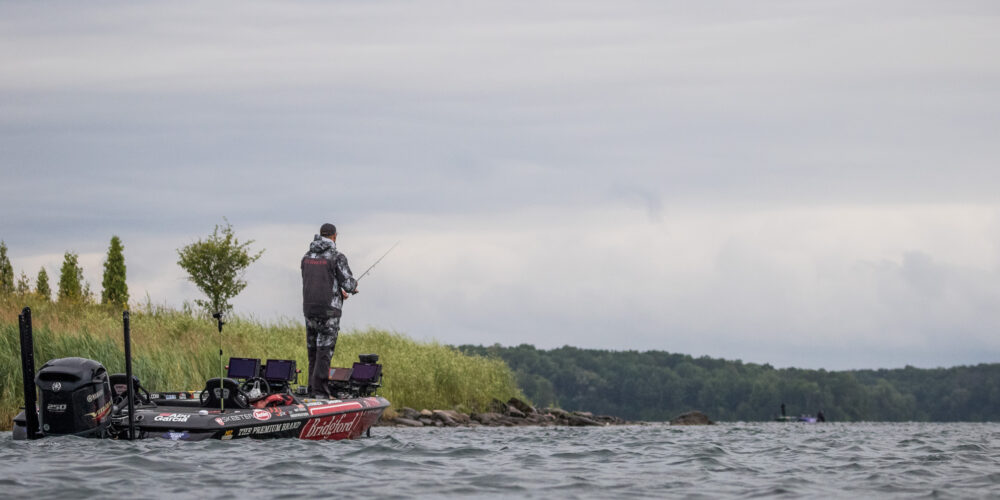 Deep or shallow? Both are working on the St. Lawrence River. It’s just a matter of which will work best amongst the top pros.

Right now, deep is leading thanks to Joey Cifuentes, but the rest of the top pros in the Tackle Warehouse Pro Circuit Presented by Bad Boy Mowers event on the St. Lawrence are getting it done a variety of ways.

In the standings, Ron Nelson’s catch of 19 pounds, 10 ounces looks great. In reality, it was anything but.

“I only caught five keepers all day today,” Nelson said.

And he burned a lot of gas and got beat up pretty bad to get them.

Like on Day 1, Nelson started near Clayton fishing shallow around some islands. Unfortunately, where the fish cooperated Thursday and he quickly sacked up 19 pounds, he only managed two before finally deciding to once again run all the way to near Lake Ontario.

“I fished hours this morning on some really good stuff and couldn’t get a bite,” Nelson said. “I have history down [near Cape Vincent]. So, I went and ran the same stuff as yesterday, and I caught two good ones and lost three more.”

That still left him one short of a limit and facing a “brutal” boat ride back. Fortunately, he knew of one good smallmouth hanging around a boulder near Ogdensburg.

“I stopped on her and located the boulder with my sonar,” Nelson said. “I cast my hair jig and she smoked it. But that was it.”

At this point, it’s no secret to what Scott Dobson is doing. It’s the same thing he does every time he comes here, and he does it better than anybody – fishing shallow flats.

The only angler to crack the 20-pound mark both days, Dobson has multiple shallow flats he’s hitting on his way down to Wolfe Island, some 90-plus miles away from Massena.

The only thing that hurt him today were some finicky fish.

“On my way down to Cape Vincent, everywhere I stopped I was stinging fish on a jerkbait,” Dobson said. “But they’d come right off. They were just slapping at it with the post-frontal conditions. I think it just had them kind of squirrely.”

Dobson likes to play a cat-and-mouse game with a jerkbait calling up the fish and then him tossing out a drop-shot to finish the job, and he did that some today, with three of his weigh-in fish coming “off the bottom.” However, the jerkbait saw considerable action, but just not as many takers as he needed.

Still, he’s exactly where he wants to be, in contention for another win in smallmouth country. But where he really wants to be is in fourth or better come Sunday, as that would qualify him for the upcoming Bass Pro Tour event on his home waters of Lake. St. Clair.

“That’s where I really want to be in a couple weeks,” Dobson said.

He’s accomplished his main goal – finish in the top 50 to qualify for the Tackle Warehouse TITLE. Now, he’s set his sights on something bigger, and he feels everything is setting up perfect to do it.

“It’s amazing to me just how much this place sets up like back home [in Wisconsin],” said Matthew Stefan.

While the other top anglers are making runs of 60 miles at a minimum, Stefan is staying closer to takeoff and fishing sloping breaks and points. Sometimes the fish are up on top in 15 feet of water and sometimes they’re at the base in 40 feet. Either way, he’s catching about two fish an hour, and the quality is exactly what he needs to make a run at the win.

“I’ve been able to break this fishery down the same way as the Mississippi River or the Wisconsin River,” Stefan said. “But instead of being in 2 feet of water they’re in 40 feet. But they’re setting up the same way. Here you can pattern the fish unlike a place like St. Clair, and I’m having a blast.”

Full disclosure, Cody Pike was not trying to catch the largest bag of Day 2. He actually “quit fishing” when he hit the 16-pound mark.

“Once I hit that, I knew I was in the cut, and my main goal was to qualify for the TITLE,” said Pike, who is running down near Clayton and fishing deep. “So, once I had that, I just started looking around.”

That looking turned very productive very quickly, as every time he stopped on something he felt looked good, he’d catch a good one and upgrade. And before he knew it, he was on a monster bag by accident.

“I really don’t even know what I found or if I caught too many,” Pike said. “I have no idea what happened today. Tomorrow, I guess I’ll go back down there because that’s all I’ve got.

“I accomplished what I needed and now I can just go fishing again.”