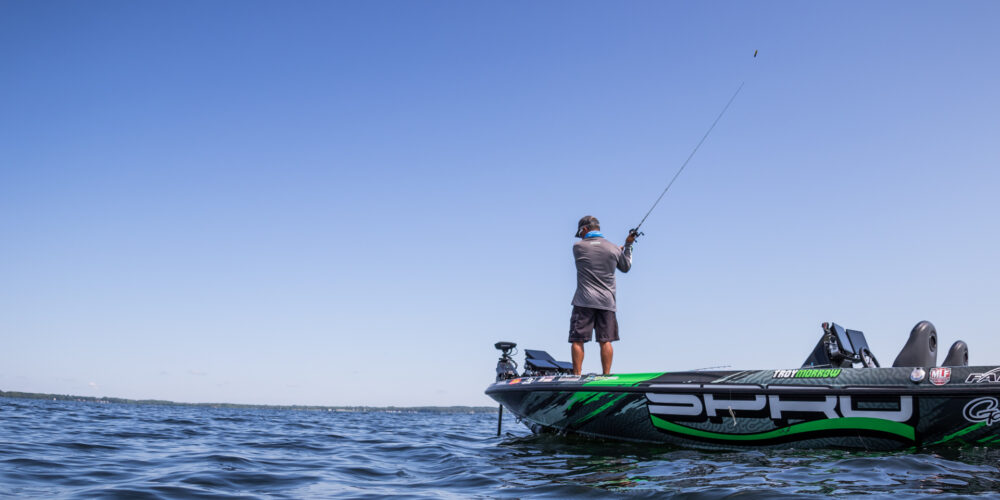 Over the last few years, pros with forward-facing sonar on their boats have unlocked the bite on sprawling mid-depth flats like never before. No longer just following birds or bait with their eyes, it’s been possible to track fish on the screen better than ever. One of the undeniable experts on Garmin Panoptix LiveScope and forward-facing sonar in general, Tackle Warehouse Pro Circuit pro Troy Morrow has earned a number of checks in recent years roaming the flats with LiveScope and is no slouch when it comes to getting the most out of areas where traditional sonar, a boulder or two and a drop-shot doesn’t quite do the trick.

Morrow’s best finish with LiveScope on flats probably came in last year’s Tackle Warehouse TITLE event on Sturgeon Bay when he just missed the cut. Recently, pros and regular anglers alike have been waylaying smallmouths at a tremendous clip on flats with scattered grass and alewives on Lake Champlain.

“Fish that get on open water flats, all they do is follow around bait like nomads,” says Morrow. “Wherever the bait goes, the fish go. When you’re getting out there with the technology now, it makes it a lot easier to catch these nomadic fish because we’re looking at them with LiveScope or other forward-facing technology.”

Recently, Morrow could be found winding around the flats of Champlain in 12 to 20 feet searching for smallmouth. At Sturgeon Bay, he found his fish in slightly heavier grass growing a few feet off the bottom.

“Up there, one of the keys was you couldn’t just LiveScope the flats and see the fish – you had to throw some type of lure to make them move,” says Morrow. “In practice, I was actually throwing a shallow jerkbait so they would come up, but not eat it. In the tournament, I came back with a small swimbait and I was able to catch those fish where I saw them in practice. The grass was a lot of times 3 or 4 feet tall, and I was in 15 or 20 feet of water. They would come up at least 4 or 5 feet, I would actually speed up my jerkbait so they couldn’t get it.”

Living on the Cutting Edge

“When the very first Panoptix system came out, the old-school one that was in 2D sonar, I had it on my boat immediately,” says Morrow. “The first thing I learned on it was the Alabama rig because you could see it so good. We’d go out over the main river channel at Hartwell and catch stripers and hybrids on the Alabama rig on Panoptix. Every version that’s come out, I’ve immediately got it on my boat and I have spent hours and hours learning it.”

Running three 10-inch graphs at the bow, Morrow dedicates one to a map and traditional sonar and the other two to LiveScope – one looking forward and one set to Perspective Mode for a broad view.

“The best tip for LiveScope is to get out and do it,” says Morrow. “There’s no substitute for pushing the buttons and spending time on the water. Get to where you can see your bait on it all the time and it won’t lie to you. The wheelhouse for throwing at a fish is about 60 feet – then you get good detail, you can tell roughly what size a fish is, and you can see their reaction. You might see the fish out there at 90 feet, and get set, and then really target them at 60.”

“There are some standard settings, you want to be at about 60 or better on gain, and playing with your color gain makes a difference,” says Morrow. “Also, I like to look a long way, so I have mine set at 100 feet or better on forward. The different color palettes definitely make a difference – different colors show different things. Some of the hotter ones, the blues and the greens, make the fish pop a little more when they’re in grass. When they’re on the rock more, I like the amber colors more because it shows the rocks and shadows better. If I’m fishing a grass flat in the morning and then going to fish rock, I might completely change how it’s set up throughout the day.”

While forward-facing sonar is obviously a huge player, it’s not the only arrow in Morrow’s quiver.

“I still idle,” explains Morrow. “Fish on the flats get boat shy, so it’s hard to idle over them, so you rarely mark the fish idling on the flats. But you can mark the bait on your side scan, and being in the area with the bait is the first step. Sometimes you have a 10-mile flat, the whole end of a lake will be flat – you can’t just fish that whole thing. You’ve got to narrow that down – once you get where the bait is, then you get on your forward-facing technology.”

Putting Bass in the Boat

As far as the catching goes, Morrow doesn’t really complicate things too much. Northern flats often come with grass, but usually not so much that weedless baits are a huge priority. Also, while he does catch plenty of fish on the standard spinning rod presentations, his preference is to try to use a baitcaster if he can.

“During the warmer months, your jerkbait is a water covering, fish-catching bait,” says Morrow. “And it’s a good starting bait because even if they won’t eat it, they’ll follow it and reveal where they’re at. I also throw a lot of single swimbaits on a jig head, in a variety of colors.”

Matching colors to the bait in the system is key for Morrow, so when the fish are chewing on alewives or shad he likes something in that ballpark. Conversely, if perch seem to be the main thing he likes a more perchy bait.

“I rotate through baits, it has a lot to do with what the fish are eating and trying to match that, but, there’s always more effective baits for putting them in the boat,” says Morrow. “On Champlain at the moment they’re roaming around following alewife schools. You can actually see the smallmouth swimming around, and a single swimbait on jig head is a very easy bait that you can throw on a baitcaster to put them in the boat easier.”

Other baits he likes beyond the swimbait and the jerkbait are umbrella rigs, tubes and drop-shots. For a swimbait, he likes an Outkast Tackle Goldeneye Swimbait Jighead with a Zoom Z Swim most of the time. On his Carolina rig, Morrow loves a Zoom Ultra Vibe Speed Craw.

“It’s day to day and hour to hour,” says Morrow of bait choice. “Sun is so crucial on flats like this – when it goes away it’s one bait, when it comes out it’s another bait. A lot of times they’ll follow a bait and you can change the retrieve or change the colors to make them eat it. Sometimes you need to change the whole bait.”

Regardless of the bait, wandering around on a big flat and picking off smallmouths is always a good time. It’s also a good way to key on bass that are likely to be actively feeding and often under a little less pressure than fish stacked up on obvious contour lines.