Why Jimmy Washam Is All-In on Fishing Gloves 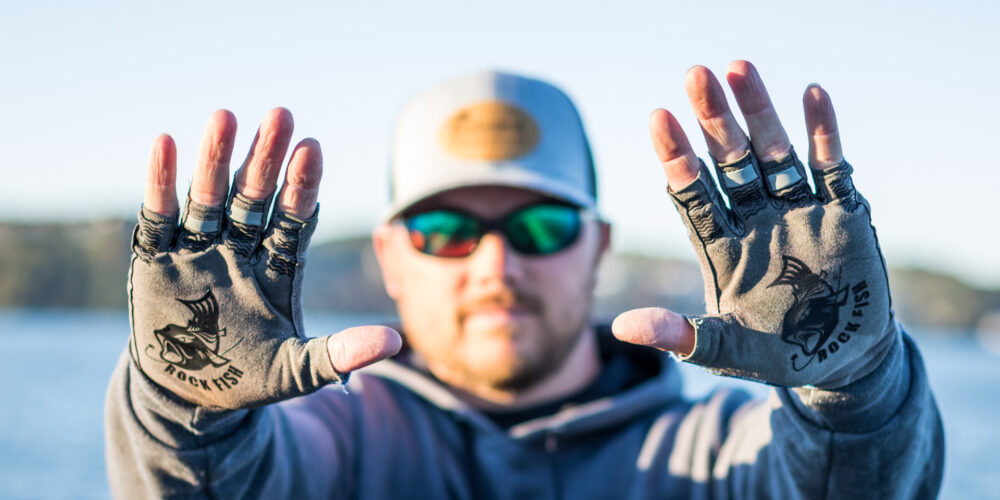 Pro anglers are all about fishing gloves these days, and it’s not because they’re suddenly super cool. As it turns out, they’re very practical for both the weekend angler and the cream of the crop competing for hundreds of thousands of dollars. Tackle Warehouse TITLE champ Jimmy Washam has been on the glove train for a while, and if you’re considering fishing with gloves on, then he’s a fount of wisdom on the subject.

When someone close to Washam got a bad case of melanoma, it sent him on a search for sun protection.

“They made me promise I would take sun precautions,” says the Tennessee pro. “It was sunblock at first, but I realized I was more likely to wear buffs and gloves consistently. That was probably five or six years ago, and that’s when I started going through the cycle of gloves.

“I went through probably six or eight pairs of gloves, and there was always something I didn’t like about them,” Washam details. “Either they had no grip control, or the thumb was too long, and if I had a fish lipped it would always dangle on my glove. I had a pair that was almost like a riding glove that seemed ok at first, but when it got wet it was miserable.”

Eventually, Washam settled on what he believes is the perfect glove, the ROCK FISH Fish Baiter Pro. With a stretchy back and a suede palm, the Fish Baiter Pro is a fairly unremarkable-looking fingerless glove that Washam has worn over dozens of tournaments and with hundreds of thousands in winnings on the line.

Beyond the obvious comfort and sun protection gloves offer, one of the biggest benefits is on the fish handling side of things.

“I can’t tell you how many close calls I’ve had with hooks,” says Washam. “I’ve even had hooks go through the suede and into my hand, but it was much less serious than it could have been. If I ever have to grab a fish, if I don’t have a net, or whatever, I can grab them with more confidence.”

Gloves help with landing fish and culling and bagging as well.

“When you grab ‘em behind the ears, those top fins can open up and go right in your palm,” says Washam. “With gloves, you can grab them with confidence and if they back up on you, you’ll be fine.”

Perhaps one of the best indicators of how good gloves can be for fish handling is how common they are on the Bass Pro Tour. During Bass Pro Tour Stages, fish control is at a premium and numbers count, and it’s more common than not to see the top anglers sporting fingerless gloves.

Your Skin Will Thank You

Gloves protect Washam from a lot of knicks along the way.

“If your hands get wet, whether it’s rainy or you’re constantly handling fish, when your hands get soggy – fish, hooks, anything will rip your hands. The last thing you want on Day 2 of a four-day event is to get a bad cut or a fin somewhere that causes you to hold the reel different.”

They’re also a big part of his sun protection regime, which is key for anyone who spends a lot of time outside.

“Sun protection is a huge thing for anyone that is going to have a long-term career in fishing,” says Washam. “You’re going to be in the sun a lot. I wear long sleeves and a mask on my face, why should I not wear gloves on my hands?”

Outside of fish handling and protection, Washam likes gloves with a suede palm because they offer a very consistent grip.

When temperatures drop in the wintertime, Washam will even layer his gloves for added warmth.

“One of the reasons I like a fishing glove with a full suede palm is when it’s cold, you can put a cotton liner glove under it, and then put the full suede glove over it and still grip the reel,” he says. “If you’ve ever tried to palm a baitcaster with a cotton glove in the winter, it’s like a banana peel.”

Even when it isn’t super cold, Washam has grown to depend on the extra grip.

“I don’t care what the weather offers, the full suede palm gives me more control of the reel,” he says. “My reel hand never slips – I can control a fish and control the rod better. I never feel like I don’t have good control of the reel. From a performance standpoint, I genuinely believe I fish better with them than without them.”