Prespawn fish do most of the work 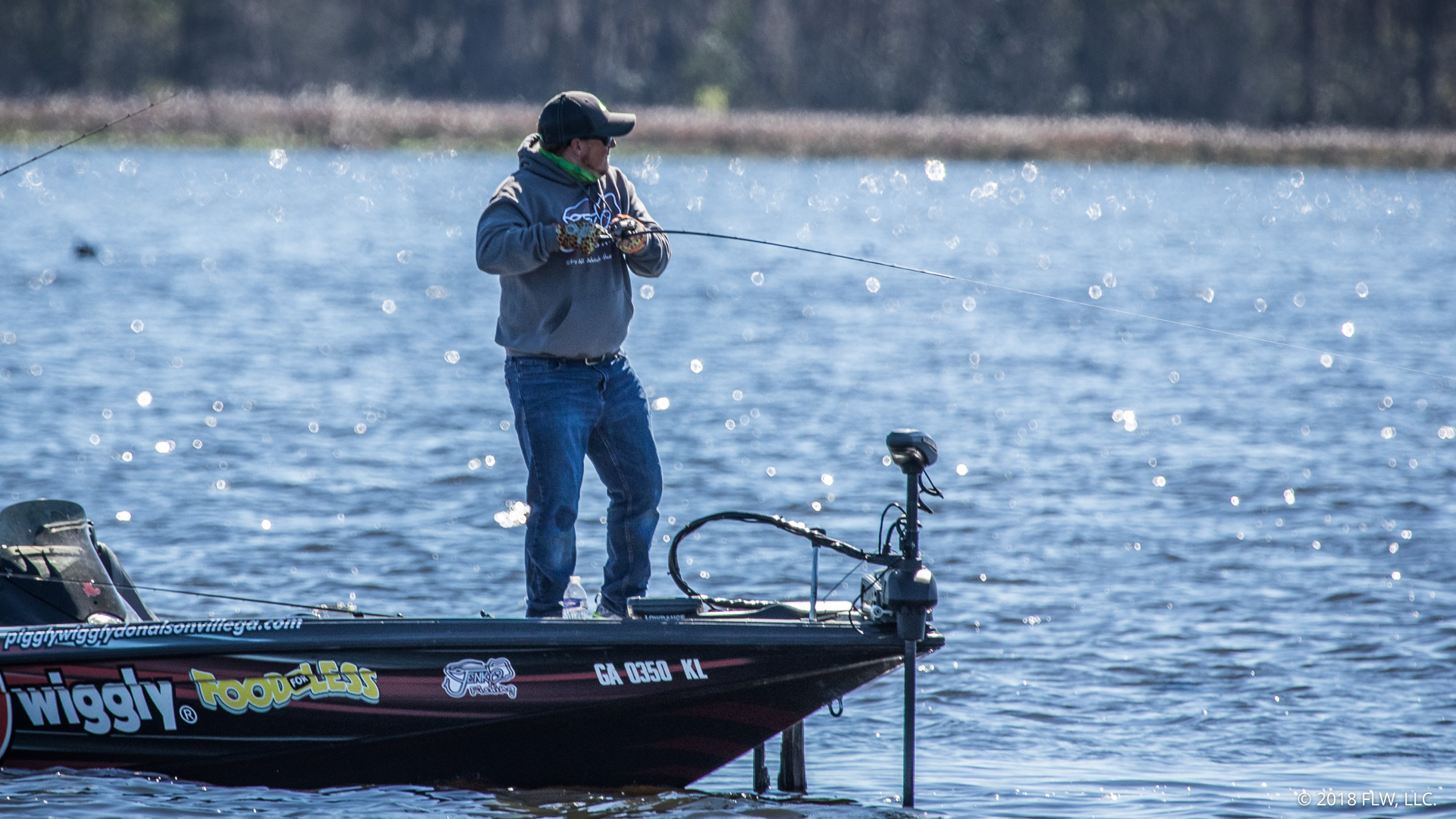 Despite high skies and a cool start, the fishing was pretty excellent on day one of the Costa FLW Series presented by T-H Marine on Lake Seminole. The second stop of the Southeastern Division saw plenty of big weights and a ton of big individual fish. Rick Tindell leads with 26 pounds, 7 ounces, but with one day of fishing left, it’s anyone’s game. Seminole has a reputation for change and lots of big bass. 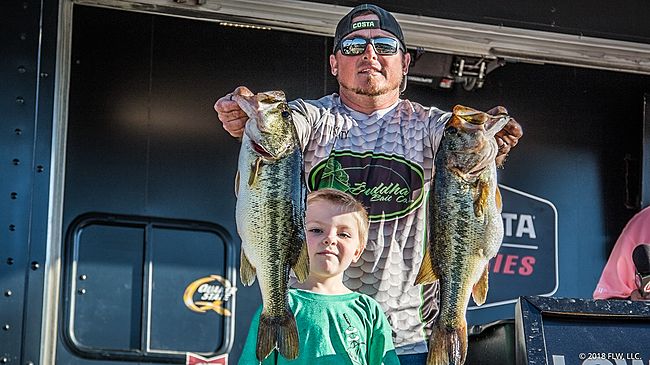 Trailing the leader by 1 pound, 10 ounces, local pro Matt Baty took a position contrary to most of his competitors by actually lauding the impacts of a cold front that swept through the area on Thursday. In his view, the weather actually facilitated his second-place catch of 24-13.

“The weather is actually helping me because I’m catching a lot of my fish really deep,” he says. “That’s me; that’s what I like to do, but I was a little nervous that I wasn’t going to be able to catch them. This time of year, you’ve got warming water temperature, warm days, plus we have a full moon this week.

“Deep fish are sketchy; they’ll move on you in a minute, so I was worried about them. But luckily, they were there today and I caught them.”

Baty says he targeted his deep fish earlier in the day and caught them on a 1-ounce Buddha Baits bladed jig with a 4-inch Big Bite Baits Cane Thumper trailer. The second half of the day saw him moving shallow and plucking one more keeper on a 3/8-ounce bladed jig with the same trailer. 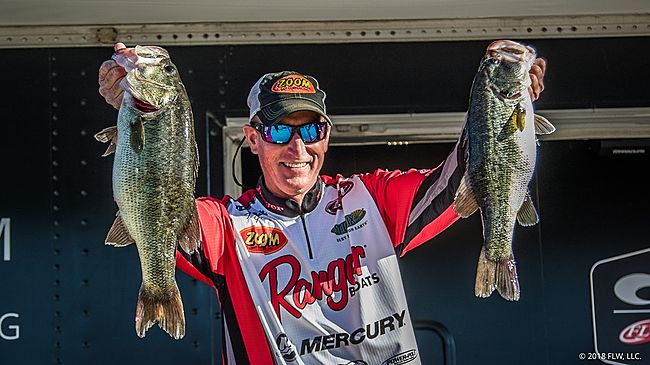 “I found one school offshore and one in a covered area,” Gibson says. “I went to the offshore school first, but the wind was blowing pretty good. Then, I went to the area that was protected by the wind and that school had moved up on the point.

“I got the first one, then I got the second one and the third one. I just got a flurry going. It reminded me of ledge fishing — in 3 feet of water. As fast I could catch them, I’d put them in the ‘well and get back after them.”

Gibson says he caught his fish on reaction baits. The shallow fish, he notes, are staging in big wolf packs before scattering.

“They’re coming up out of the deep water and staging on a specific area,” he says. “I’m finding them before they disperse.” 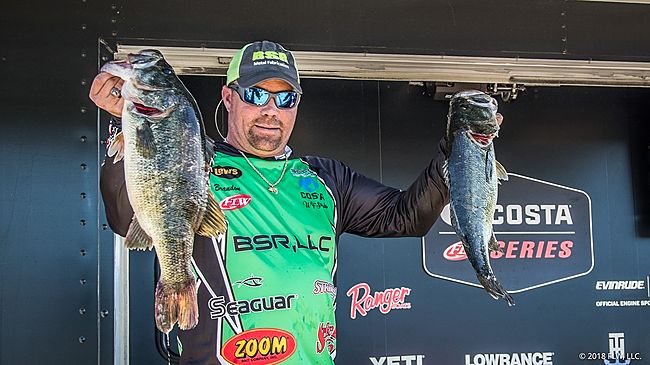 Patience was imperative for Brandon Classon, as his bite required some solar assistance. Waiting out the action enabled him to sack up a fourth-place limit of 21-15.

“The bite came later in the day when the sun came up,” he says. “The wind increased and I tucked out of the wind and fished a grass line.”

Classon says he targeted prespawn fish in the lower end of Spring Creek. He worked an area he had found a couple of days earlier.

“I practiced there and caught some 3- and 4-pounders and kind of backed off it,” he says. “I hope they hold up tomorrow.” 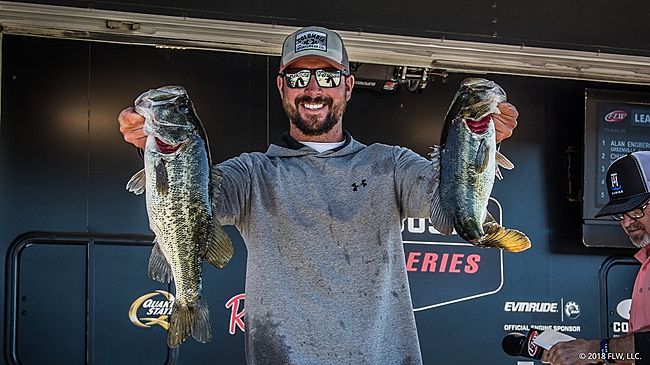 When his primary pattern fell victim to the cold front, Kurt Mitchell shifted gears, dialed in an alternate pattern and sacked up a limit of 20-1 that put him in fifth place.

“I had some fish in the backwaters and they weren’t eating today,” says Mitchell. “I think that cold front’s high-pressure system made it tough.

“I had to go out and fish some current breaks. All my fish had to be related to the current. If they didn’t pull the current today, I wouldn’t have caught any fish.”

Mitchell says he caught his fish on a vibrating jig. He says scattered grass and rocky bottom was the key to finding the prespawn fish.