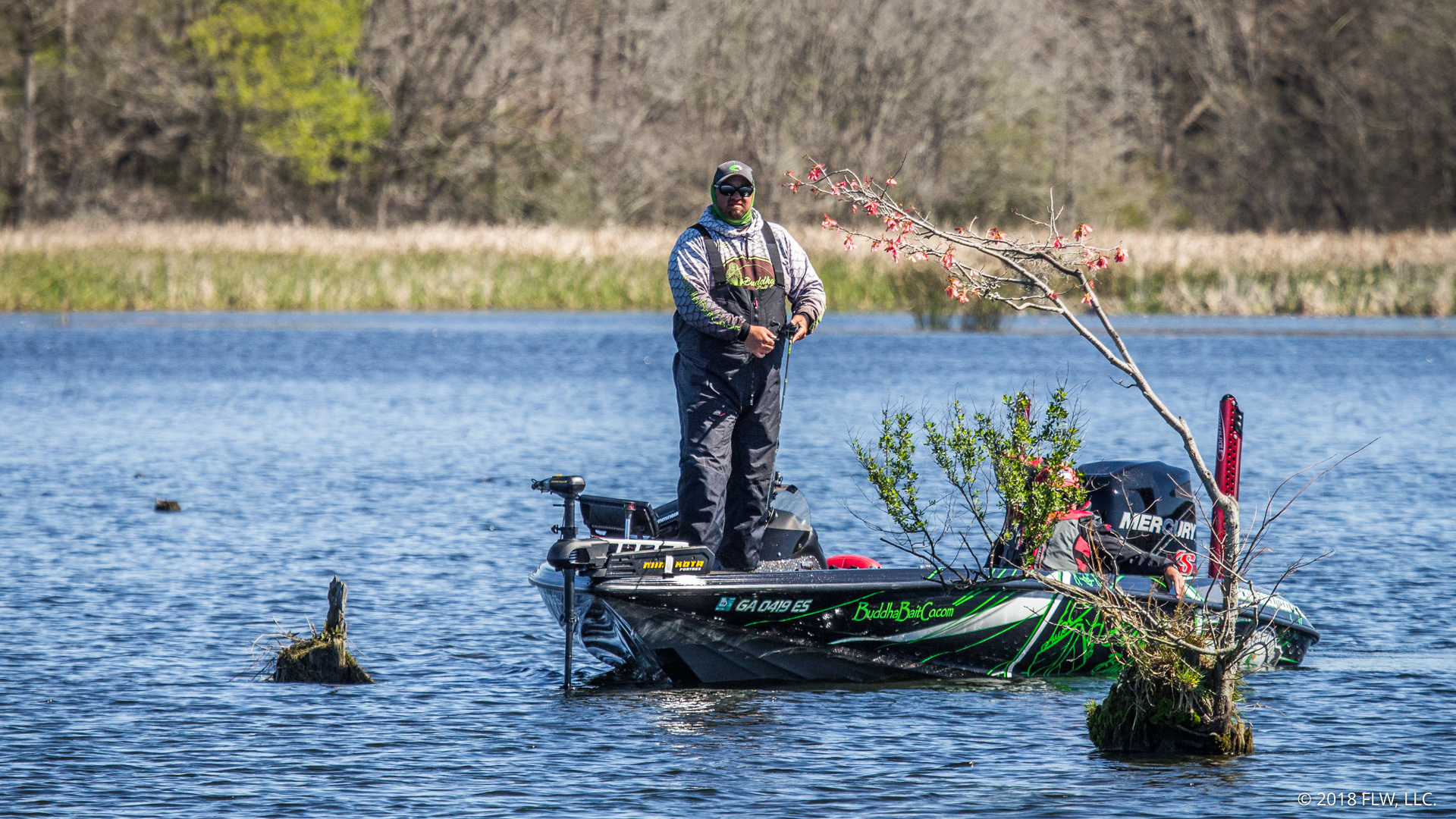 Local pro Matt Baty says he benefited from the cold front that whipped through southwestern Georgia last week during the Costa FLW Series Southeastern Division event on Lake Seminole. The weather stalled the likely shoreward movement of prespawn fish he had located on a Spring Creek channel turn. Capitalizing on the scenario, he sacked up a two-day total of 45 pounds to win the tournament, which was presented by T-H Marine.

The tournament’s scheduled start was postponed from Thursday to Friday due to high winds, which stirred the lake and ushered in a sharp temperature drop. The full field fished Friday and Saturday.

Here’s how the rest of the top 10 navigated the conditions on Seminole. 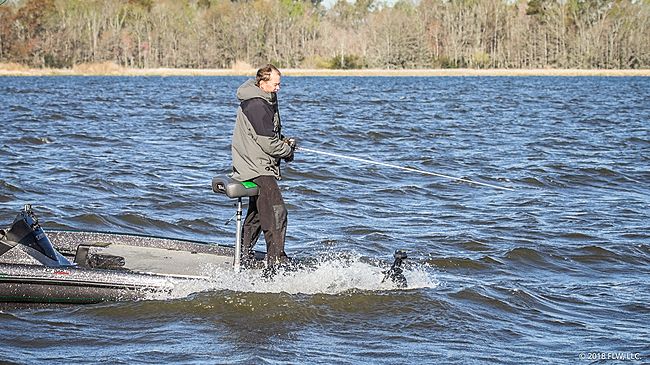 After he boated the tournament’s heaviest bag – 26-7 – on day one, Rick Tindell struggled to find the quality bites on the final day and slipped from the lead. The Leesburg, Ga., pro added 16-6 and finished second with 42-13.

Tindell focused on main-lake grass where prespawn fish were gathered to feed on shad. He threw a Strike King 6XD crankbait in a white/black back pattern. Ticking along the grass, occasionally snagging strands and snapping the bait free proved to be a productive presentation.

“My quality went down today [day two],” Tindell says. “I’d only been catching four or five fish there first thing in the morning. I caught four on day two, and one of them was 12 inches long. I went from 5- and 6-pounders down to 3- and 4-pounders.”

Tindell’s spot was positioned perfectly for regular replenishing, but with the incomers were also fish moving out. Catching them was all luck of the draw and timing.

“They’re just coming and going there, and tomorrow there might be a 25-pound limit on that spot,” Tindell says.

Knowing that he had to capitalize on every bite, Tindell replaced his bait’s stock hooks with Mustad KVD Triple Grip trebles, which he says improved hooking and retention. 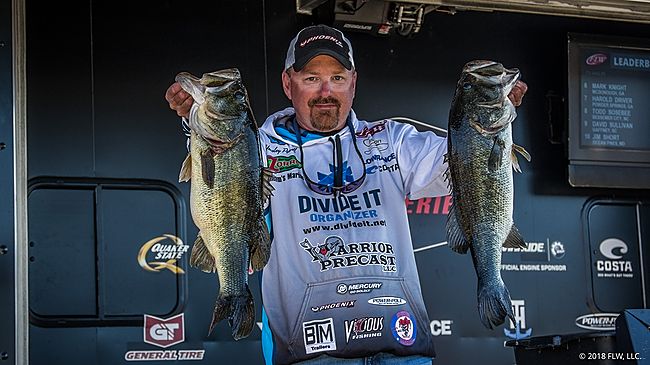 3. Powell’s hyacinth pattern moves him up to third

Tennessee pro developed a pattern in practice that he executed well in the tournament. This consistency earned him a third-place finish with daily weights of 19-4 and 21-10 for a total of 40-14.

“I found a hyacinth-flipping pattern only from midday on,” Powell says. “I’d go down the lake and fish for a big one by flipping a Missile Baits D Bomb.”

Before the pattern turned on, Powell targeted prespawn fish around main-lake timber with an umbrella rig with Zoom Swimmin’ Super Fluke Jr. swimbaits.

“Earlier in the day, I had one area that had some females coming in, and they were white,” says Powell. The coloring indicates the fish were new arrivals from deeper water. “Every day there were more coming in.”

The hyacinth deal delivered a few key opportunities each day, but it also left him with regrets over what could’ve been. 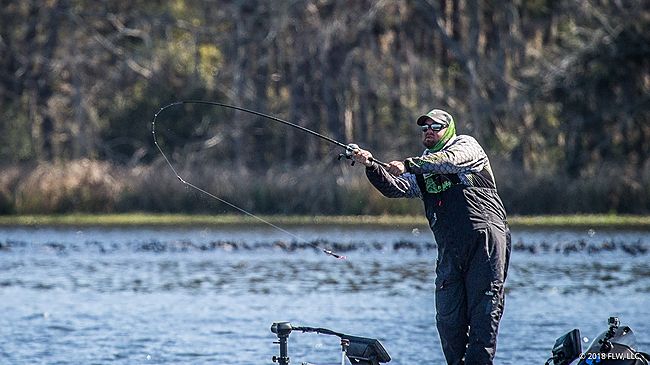 With 19-7 on day one and 20 pounds on day two, Jason Smith’s fourth-place effort of 39-7 was one of the event’s most consistent performances. However, day two brought potential victory within inches, only to crush his hopes at literally the last second.

As Smith explains, his Carolina-rigged worm tempted a huge fish that he worked all the way to the net. With the fish just inches from the mesh, the rig’s swivel snagged on the net frame, and the fish broke the leader.

Smith put together a solid day-two bag with a mix of Strike King 6XD crankbaits, topwaters and a Texas-rigged Buddha Bait Co. Baby Mama. Fishing Spring Creek, Smith says he caught fish from 2 to 20 feet. His final day saw a brief false start, but once he got underway, the bites came quickly.

“I pulled up where I started on day one and didn’t catch a fish, but I went to another school and caught 15 or 20 fish, almost in a row,” Smith says. “I was throwing a crankbait, and when they quit biting that, I threw a Carolina rig in there and hooked one that was well over 9 pounds.

“When you lose one on those big schools, they kind of break up. So I ran up the creek and caught a couple more that helped me. I never really caught anything else that would help me. It was hard to recover from that loss.” 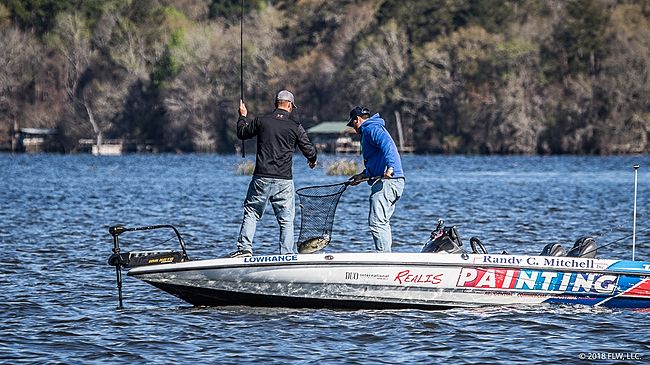 Deleware’s Kurt Mitchell placed fifth on day one and held fast at that position to finish with 39-4. His success was based on fish schooling up near grass lines, but day two required an adjustment.

“Later in the day, I found the school one more time; they just moved way out. I got them fired up, and I caught a 6- and a 5-pounder and it was done.”

Mitchell caught all of his fish on a 1/2-ounce white Z-Man/Evergreen Jack Hammer ChatterBait with a Yamamoto Zako trailer. His plastic choice was a good fit for the weekend’s weather.

“That Zako has very subtle ‘wag’ to it,” Mitchell says. “A [paddle tail] swimbait can be more aggressive, but with a cold front like we had this week, I like that Zako better.” 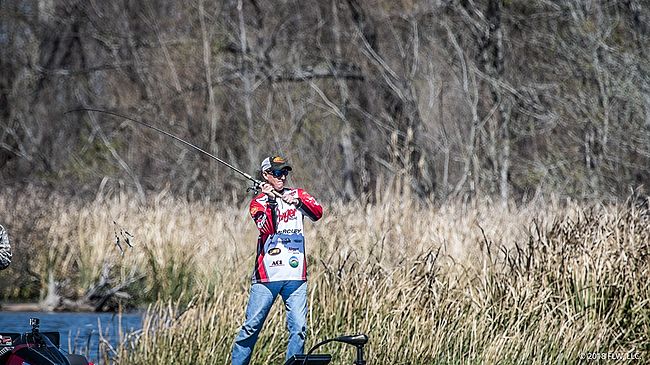 Arkansas pro Troy Gibson positioned himself well on day one with a third-place limit that went 22-8. Seminole was a little less generous on day two, with Gibson weighing 16-1 and slipping to sixth with 38-9 overall.

Gibson targeted groups of fish that rose from deep wintering spots to stage on the outer edges of the prespawn zone. Specifically, he was targeting a shallow point in Spring Creek. His first task when he located a school was to fire it up.

“I caught a few, but I just couldn’t get it going,” Smith says of the final day. “So I pulled out the Alabama rig and went to working on them and got them fired up. It was on then.

“For me, this is like ledge fishing on Kentucky Lake, only I’m in 3 feet of water. It’s all about finding those big schools when they move up and they haven’t dispersed yet. I was fortunate enough in practice to find three of those schools. One of the schools I fished yesterday [Friday] never fired up, but it fired up this morning and I got three good ones off of it.”

In addition to his umbrella rig outfitted with Zoom 4-inch Swimmers in Tennessee shad, Gibson caught a couple of keepers on a blue/chrome Bill Lewis Rat-L-Trap. 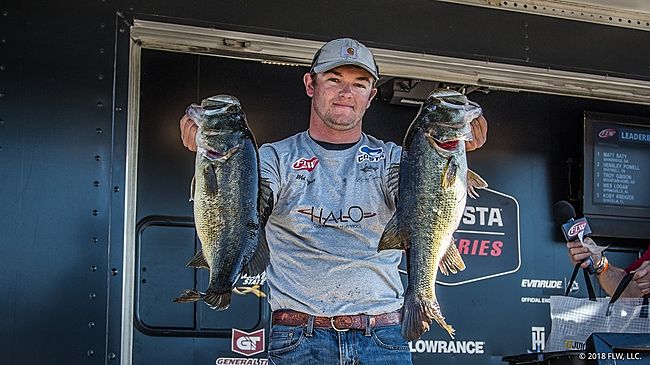 It’s nice when you have a good fishing spot to yourself, and that’s precisely what points to for his rise from 14th to seventh place. The Alabama pro caught a limit of 17-4 on day one, added 21-4 on day two and finished with 38-8.

“I think what happened was that some people left the area that I was fishing; it was really crowded yesterday [Friday], and I was able to pick around and fish behind guys,” Logan says. “Today [Saturday] there wasn’t anybody over there, and I was able to settle down and really pick the place apart. I got two key bites this morning, but I jumped off a 4-pounder 10 minutes before I came in.”

Logan fished grass and wood around the mouths of the Flint, Spring and Chattahoochee rivers. Working in and out from 6 to 10 feet, he threw a 5/16-ounce Dirty Jigs No-Jack Swim Jig with a NetBait Paca Craw trailer and flipped a NetBait B Bug with a 1 1/2-ounce weight. 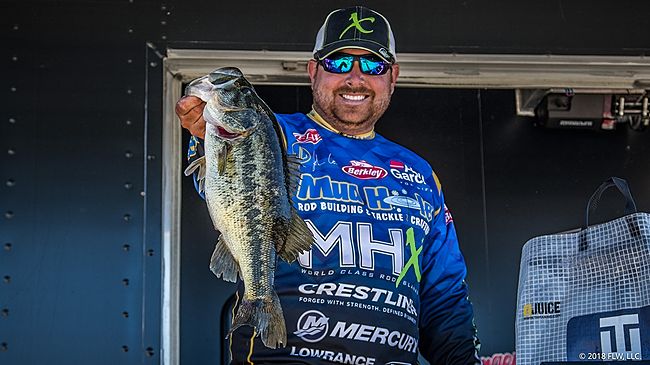 It might not have been the flashiest of tournament performances, but shallow-water expert John Cox overcame a lack of consistency to put together a two-day total of 33-7 that earned him eighth place.

“I didn’t have any game plan. My practice was awful,” the 2016 Forrest Wood Cup champion says. “Today [Saturday], I ran my Crestliner completely out of gas. I had to bounce around to catch the ones I did. I only culled two times. I was hoping to find some big ones on beds, but it never worked out.”

Spending his final day in various parts of Spring Creek, Cox caught his fish on a black Berkley PowerBait MaxScent Hit Worm, Texas-rigged with a 1/8-ounce weight. Fishing the worm on spinning tackle with 10-pound-test Berkley FireLine and a 10-pound-test Berkley Trilene 100% Fluorocarbon leader, he made long, slow presentations.

Cox also added a couple of fish around laydowns and stumps with a 1/2-ounce Dirty Jigs flipping jig with a Berkley PowerBait MaxScent Meaty Chunk. 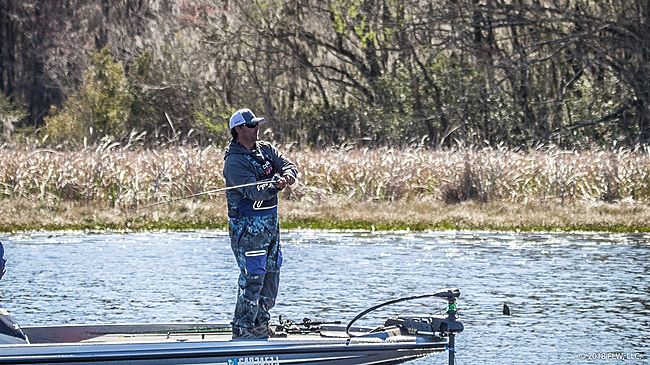 “I went from the Rapala Shad Rap I was using on day one to a Strike King 5XD and went a little bit deeper,” Enfinger says. “I was trying to target prespawn or postspawn fish away from all the pressure of everybody on the bank.

“It’s a five-or-six-bite thing, but when you get one, it’s the one you need. It’s kind of nerve-racking, because you may only get three that go 15 pounds.”

In addition to his four crankbait fish, Enfinger also caught a keeper on a handmade 1-ounce spinnerbait with a single willow-leaf blade and a NetBait BK Swimbait trailer. 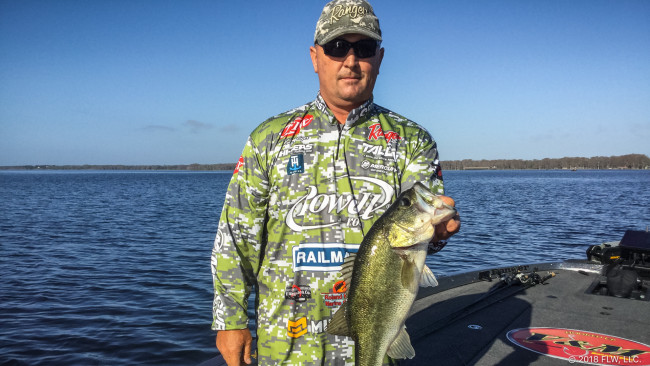 Kreiger split his day with distinct morning and afternoon patterns. Early in the day he fished an umbrella rig over grass-lined edges in 7 to 8 feet of water. He outfitted his rig with V&M Thunder Shad Jr. bodies on homemade 1/4-ounce swimbait heads.

Later in the day, Kreiger turned to backwater ponds with a black/blue V&M Chopstick, which he wacky-rigged on a No. 1 Gamakatsu hook. Isolated lily pad clumps were his targets.