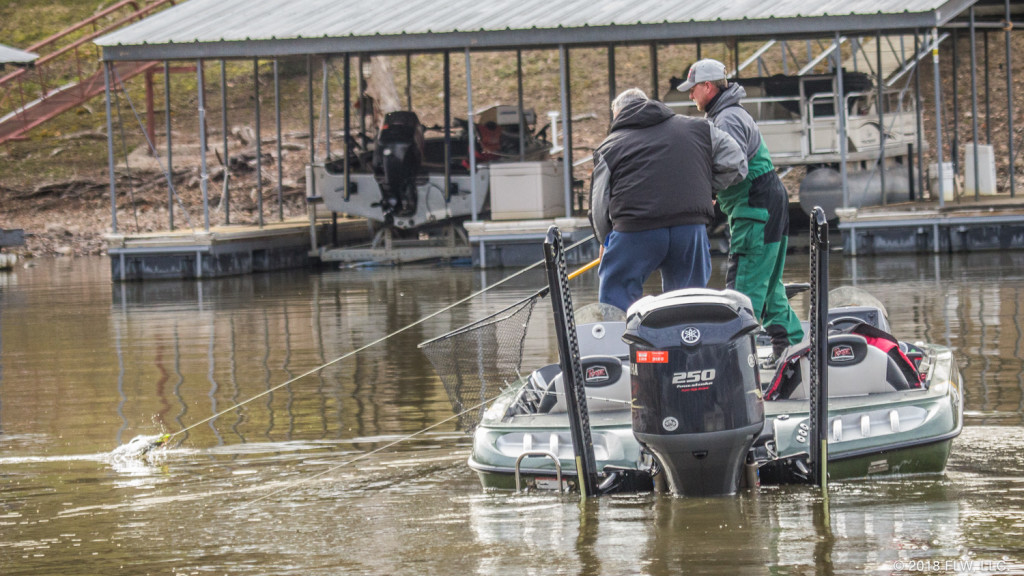 Toby Hartsell caught a day-one limit of 19 pounds, 4 ounces to take the early lead in the Costa FLW Series Southwestern Division event on Grand Lake. The tournament is presented by Ranger and hosted by the City of Grove.

Hartsell caught his fish on a mix of reaction baits and a flipping jig. Read more about his day-one performance here. 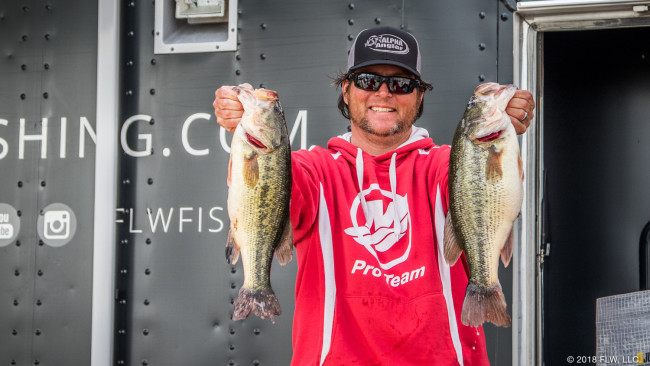 He acknowledges he’s playing a high-risk, high-reward game, but Kevin Ledoux was obviously able to deliver the goods. He trails the leader by a slim margin of 5 ounces with a day-one catch of 18-15.

“The way I’m fishing, you don’t get many bites,” he says. “I’m fishing mud – super-isolated stuff – and you can almost call your shot whenever you get to it.”

Ledoux says his primary bait is a large spinnerbait. This reaction-style presentation produced aggressive assaults, a couple of which resulted in missed opportunities.

“I was slow-rolling my spinnerbait through a tree and watched an absolute giant come up and get it,” he says. “I stuck her for just a second, and she pulled off. I didn’t think much of it, so I went to the next tree and the same thing happened.”

In addition to the tucked-away trees, Ledoux also fished isolated rocks and isolated docks. The plan was to get away from the crowds and present a big profile in hopes of tempting bigger fish.

“I’m staying back off of them because these fish are pretty shallow,” he says. “I got seven bites all day. The big one was my first one this morning. I had three at 9:30. Then I lost those two big ones, and I didn’t catch No. 5 until an hour before check-in.” 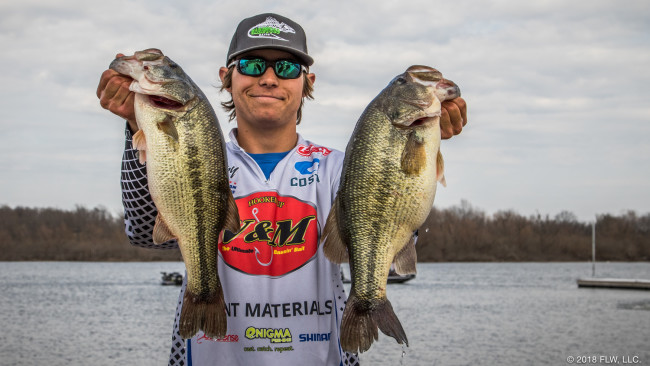 Kind of the opposite of an Oreo, the sweet stuff was on the day’s outside ends for Colby Miller, who caught the third-place limit of 18-10.

“I started off the morning by catching a 4 1/4-pound fish at about 8:30, and then it went dry until about 2 o’clock when it seemed like the light switch turned on and they just started biting,” the Louisiana pro says.

Miller’s first fish bit a jig, but he was unable to sustain that pattern, so he started running his spots and throwing a spinnerbait once the conditions changed.

“The wind picked up about 5 mph, and that just pushed those fish to the backs of pockets,” Miller says. “I had to hit about 15 areas, bouncing around and covering a lot of water.”

Miller says his afternoon bites came on the backsides of docks where he used his Minn Kota Ultrex with Spot-Lock and his Power-Poles to hold in the right position for repetitive casts to the target zones. 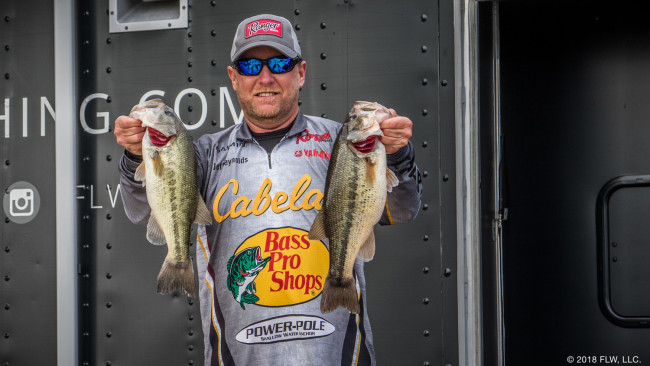 Capitalizing on being in the right place at the right time led Oklahoma pro Jeff Reynolds to the fourth-place limit of 16-8.

“I mixed it up a lot. I ran some flats and fished some wood and caught a few like that, but later in the day when it started warming up and the wind picked up they started biting a little bit for me,” Reynolds says. “I hit one little stretch where I caught four or five keepers in 30 to 45 minutes, and that pretty much summed up my day.

“I really thought they were going to start biting for me later in the day when it warmed up, but that one little stretch was all I could find.”

With Grand’s fish likely poised for a major prespawn advancement soon, anglers seemed to find singles and small groups throughout the day. Reynolds says the scenario required a strategic decision.

“A guy could either sit in one spot all day long and wait for a couple to move up and hopefully catch them, or he could keep running and gunning, hoping to run in front of a couple of them,” he says. “I think you have to keep going. I burned nearly a full tank of gas today.” 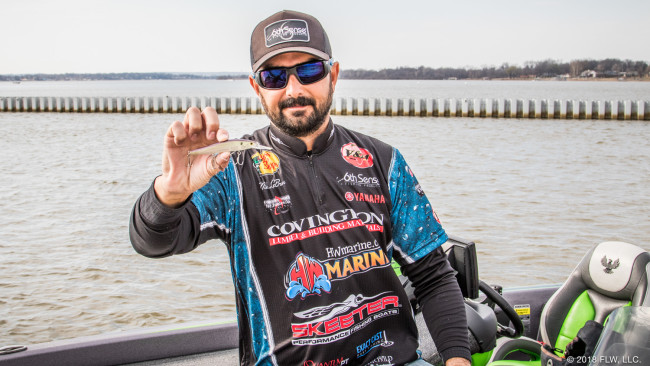 Taking a different approach, Louisiana’s Nick Lebrun decided to stake out an attractive mid-lake area and work it diligently. His strategy delivered a fifth-place limit of 16-3.

“With it being tough, my approach was to fish really slowly and let the fish come to us,” Lebrun says. “Instead of running around and hitting 50 spots a day, we hit a few spots, but hit them really, really good. Every time you cast, you have to act like a 5-pounder is staring at it.”

Specifically, that meant making repetitive casts to his targets, reading the bottom and methodically covering each of his four spots. Lebrun says he caught a couple of his fish on a V&M Adrenaline Flippin Jig trimmed tight for a compact look with a J-Bug trailer. He also caught keepers on a 6th Sense Provoke jerkbait.

“When it’s tough like this, I like to keep a bait in the water and keep the [outboard engine] key off,” he says.