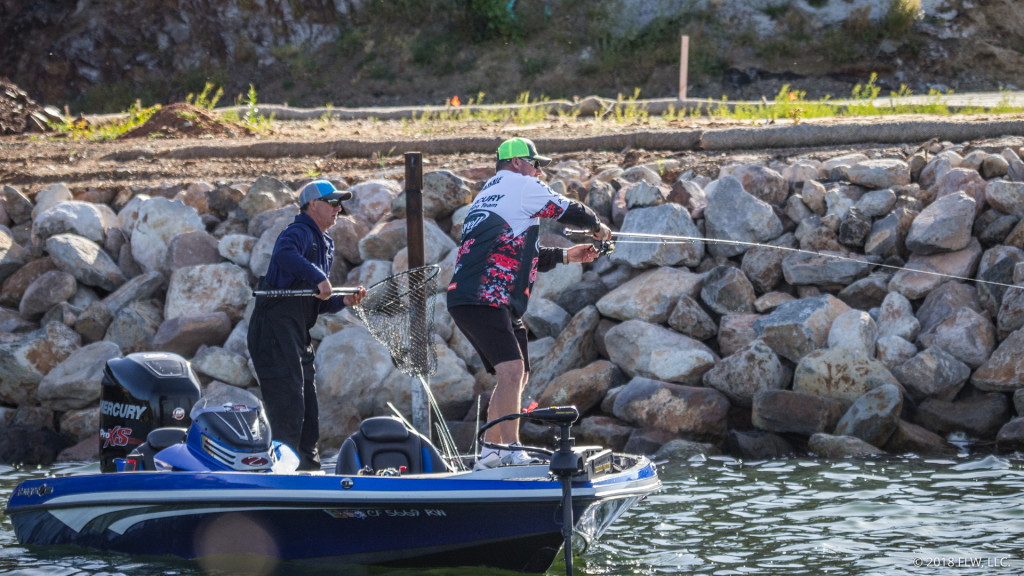 Local pro Wayne Breazeale made a long run each day, adjusted to changing conditions and earned a wire-to-wire victory in the Costa FLW Series Western Division event presented by Evinrude on Clear Lake.

Hailing from Kelseyville, Calif., Breazeale fished a mix of docks, riprap and tules with a drop-shot and a Yamamoto Single Tail Grub on a 1/4-ounce round-head jig.

Here’s how the rest of the top finishers made the cut. 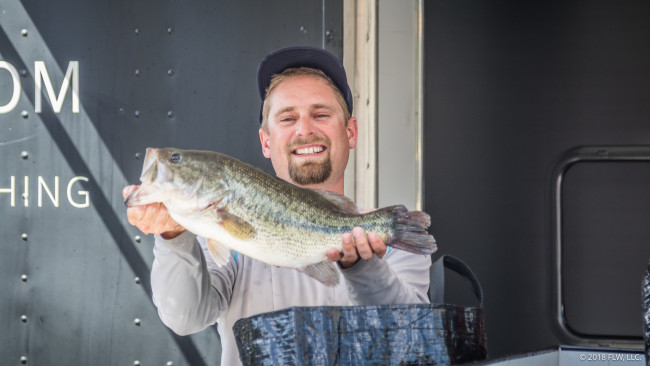 Right place at the right time is a fair assessment of Nick Nourot’s huge 23-pound, 5-ounce effort on day two, which lifted him from 18th place to third and positioned him to finish second with 57-8.

“I only had one day of practice, but a friend who has a house on the lake keyed me into a few spots,” Nourot says. “I was looking for big bed fish because I knew that was probably what would win the tournament. I found a couple, and, of course, they were gone on day one, so I caught a limit on a swimbait and a drop-shot.

“On day two, I found an area where they moved up around noon, and there were 5- to 10-pounders swimming all around the boat. I figured out a little bait to get them to bite and caught 23-5. I went back there on day three and ground on them.”

“I was keeping the line kind of light, and I downsized my hook to try to make them bite,” he says. “Some of them, you’d throw it in there and they’d swim over and eat it. These fish weren’t on beds; they were just swimming around.” 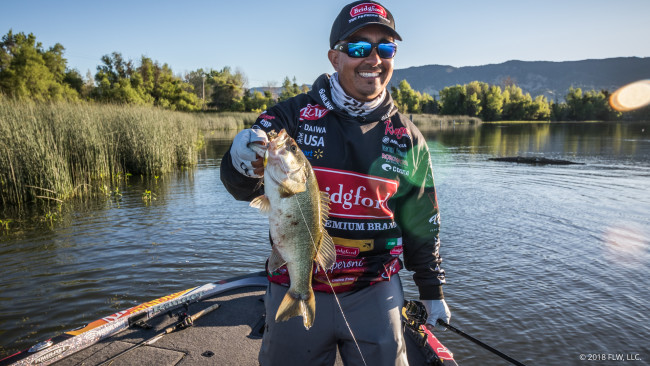 Arizona pro Joe Uribe Jr. enjoyed two blistering mornings when he leveraged a big-time shad spawn at the mouth of Rodman Slough, before transitioning to the usual tule drop-shotting deal. Day one saw him weigh 21-12, with the second day giving up 19-3.

“Today [Saturday] I had to go out there and go fishing,” Uribe says. “The last two days were straight catching. I found a special spot, and I had no idea how good it was in practice. On day one, my co-angler and I probably caught 50 fish.

“The second day, my co-angler and I went out, and I thought, ‘There’s no way these fish will be back there,’ and, holy mackerel, they were back there. We caught another 50 fish. I would go 15 casts and catch fish every time. On day three, I knew what could happen, and it did happen. The bait was gone, and the fish were gone.” 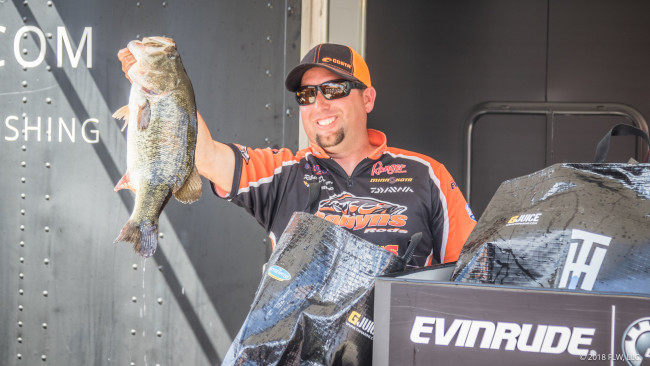 Big bites are critical to tournament success, and California pro Richard Dobyns got one each day en route to finishing fourth with 51-4.

“I caught them all pitching a drop-shot with a margarita mutilator Roboworm,” Dobyns says. “I pitched to docks, tules – anything and everything that was on the bank.

“There are plenty of big ones swimming around, and I had an 8-pounder on day two. That’s just a phenomenal fish.”

Dobyns also bagged a 6-pounder on day three. Drop-shotting was not his first choice, but his ability to shift gears likely salvaged his tournament. 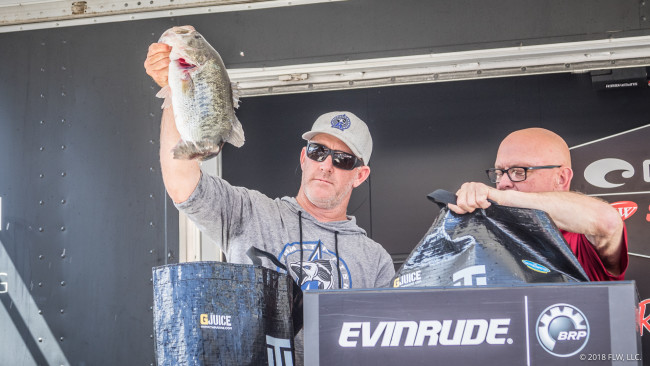 Benjamin Byrd turned in the tournament’s most consistent performance with daily scores of 17-7, 17-7 and 17-0.

“I was junk-fishing all week,” the pro from Moab, Utah, says. “I was throwing the rip bait quite a bit. I caught some bed fish on a drop-shot and some topwater fish; frog fish, mainly.”

Favoring the venerable margarita mutilator color for his drop-shot worm, Byrd says he fishes this rig as a minimalist.

“I think the key to a drop-shot is to hold it as still as you can,” he says. “That worm has enough action on its own. Just throw it out there and let it sit. If you don’t get bit, throw it somewhere else.” 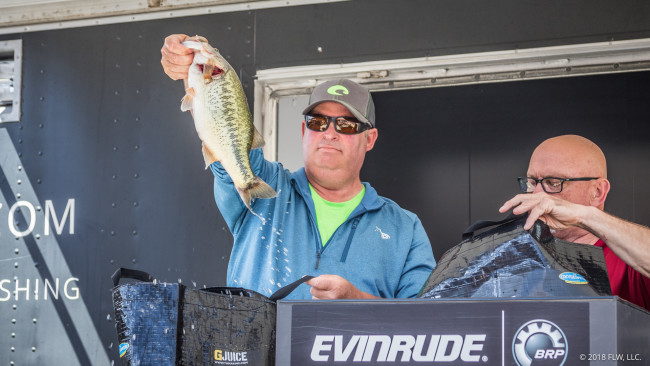 6. Mackenzie moves up to sixth

Gradually improving weights that culminated with a 19-pound limit on the final day allowed Mackenzie to climb the leaderboard to sixth place with a total weight of 51 pounds.

The pro from Hercules, Calif., says his day three weight came as a result of changing up his game plan.

“I had been sight-fishing all week, but we had that big wind last night [Friday], and it dirtied up the water, and I couldn’t see anything,” he says. “I just went around fishing today [Saturday], and I just got lucky.

“I caught fish on a 1/2-ounce under-spin with a Keitech 3.8 Swing Impact FAT trailer, I drop-shotted one, I sight-fished one and I flipped one, so a little bit of everything,” he says. “A chartreuse and white tube was my main bait throughout the week. That’s what I used for sight-fishing.” 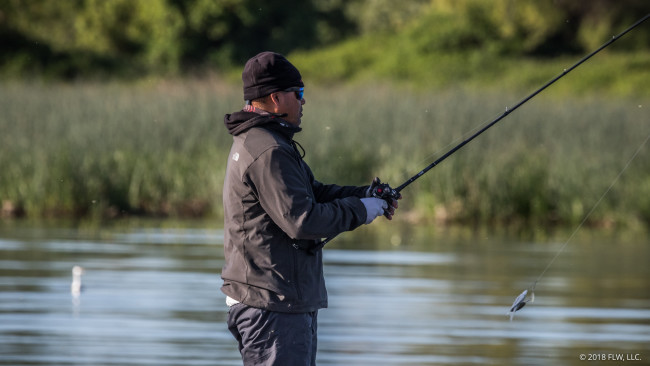 Vince Hurtado of Turlock, Calif., found a solid pattern that rewarded him well the first two days, but fizzled in the final round. Targeting a channel lined with multiple types of vegetation, Hurtado picked off prespawners and postspawners moving in and out of the area.

Hurtado made the cut in fourth place with a two-day total of 35-12, but tougher conditions on day three forced him to change his focus. After catching only two decent keepers in his migration lane, Hurtado picked up a flipping stick and ended up filling his limit with a bag anchored by a 5-pounder he caught while flipping tules five minutes from takeoff.

“When things get tough, I pull out a flipping stick and go shallow. That’s my strength,” Hurtado says. 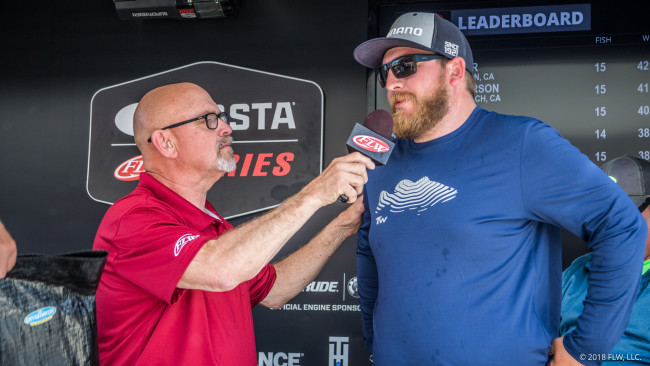 Matt Dal Porto of Sutter, Calif., spent most of his tournament looking for bed fish, and the strategy paid off with a tournament total of 45-12.

The third day was his most challenging.

“The wind affected my sight-fishing a little bit. A couple of my areas were pretty muddied up, but I think they were small ones that wouldn’t have helped me anyway,” he says.

Dal Porto caught most of his fish on a Lucky Craft Pointer 100 in chartreuse shad and an All Terrain Tackle Swim Jig with a Keitech 3.8 Swing Impact FAT trailer.

Asked about his technique, Dal Porto replied: “I think it’s more about how you do it than what you use. You have to make them mad.” 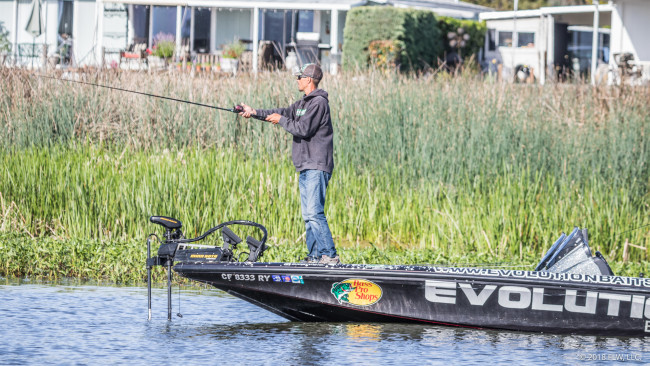 On stage, local stick Paul Bailey stated that he decided to fish the tournament when his longtime pal Matt Dal Porto agreed to fish. Dal Porto got off to a more productive start, but at the final tally, Bailey had risen from 38th on day one to ninth with a total weight of 45-2, just 10 ounces behind his friend.

A well-known big-fish slinger, Bailey invested much of his time looking for those day-changers, but they mostly eluded him.

“I caught  them on probably 15 baits over three days, but my best baits were a Gan Craft Rest 108 [jerkbait] in the blueback herring color and an under-spin,” Bailey says. “I didn’t do much worming; I didn’t as much I probably should have. I just wanted to go fishing.

“There are so many big fish in this lake. I figured in three days I’d hit one of them on the head, but I guess not.” 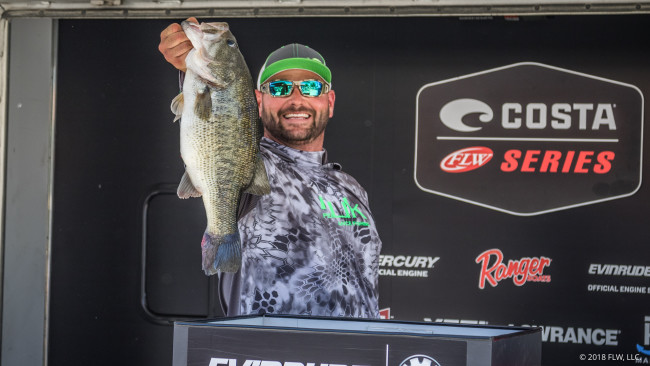 Modesto, Calif., pro Bub Tosh was on his way to mounting a big comeback, but in the final round the wheels came off the wagon. Placing 34th on day one with 14-11, Tosh rose to seventh on day two after catching 18-9. Day three yielded only a small limit of 9-14, and Tosh slipped to 10th.

“I caught them flipping a Yamamoto Sanshouo in the bluegill color and a Yamamoto Kreature in mowed grass,” Tosh says. “They were eating bluegills in the mornings up in the viney, leafy green vegetation.

“They were blowing shad and spawning throughout the day. A lot of these fish were fry guarders, so I flipped a really light weight. The first two days I caught 30 to 40 fish, but today [Saturday] it just died.”

Tosh got a couple of big bites on days one and two on a Huddleston swimbait. Day two saw him lose an 8-plus-pounder that shook his swimbait, but after firing back into the same spot Tosh caught a 7.