Windy weather has limited the pros on the final day 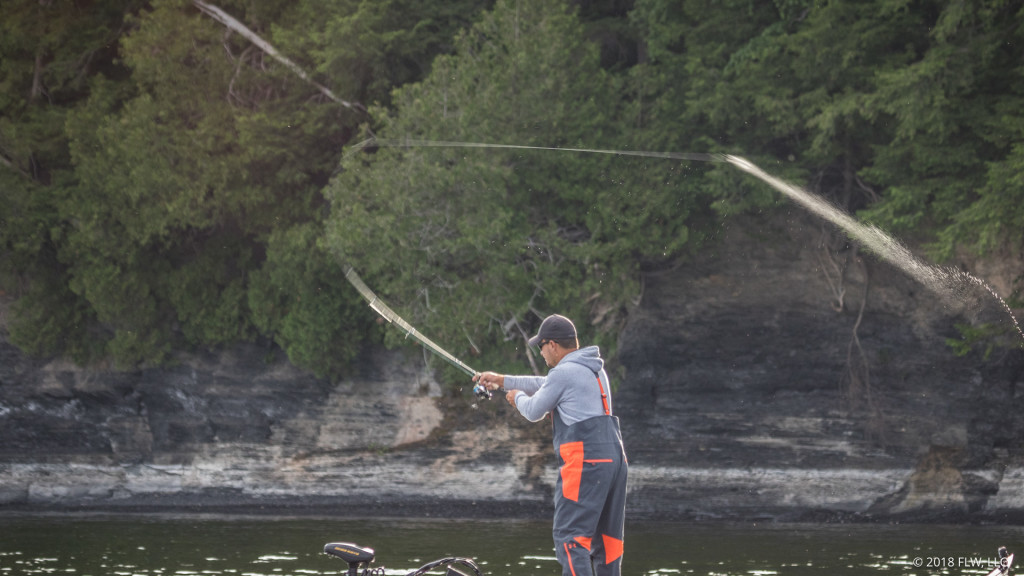 If the final day was as calm and sunny as day two, the top 10 pros in the Costa FLW Series Northern Division event presented by Power-Pole would be smashing bedding smallmouth right now. Unfortunately, the weather has intervened a little – there have been 2- to 3-footers rolling around Plattsburgh from the south all morning with intermittent showers as well. Oddly enough, the whole lake hasn’t been rough – south of Burlington the wind was calm and the lake was nearly slick most of the morning.

Weather aside, the pros have been able to catch plenty of bedded smallmouths they marked earlier. It’s just making it extremely hard to find new 4-pounders to make a charge. Leading the way, Brett Carnright started off well, catching about 18 pounds pretty early on. Ron Nelson has taken a bit, but he’s now gotten to around 18 pounds too, as has Austin Felix. Essentially, the top three are still knotted right up.

The last time we saw Cory Johnston he was having a tough day, with only about 13 pounds in the livewell. Starting in fifth, Chris Adams put 17 pounds in the boat pretty fast, but had to go looking for new fish to try to improve on that. In sixth, Ryan Latinville got up to about 17.5 pounds early, and we left him flogging around in the waves looking for “ol’ big.”

Chris Johnston could be one of the big movers of the day – he’s got a 5-pound smallmouth in the box and about 18 pounds. Another cull or two and he could be scratching 19 or 20 with a chance to really move up. JJ Judd checked in with a bit over 16 pounds around 11 a.m., and Bradley Dortch still had just one around the same time.

Weigh-in starts at 2 p.m., and it ought to be a pretty tight one. The difference might end up being who can add one more 4-pounder late, or perhaps catch a largemouth or a smallmouth that isn’t on the bed.