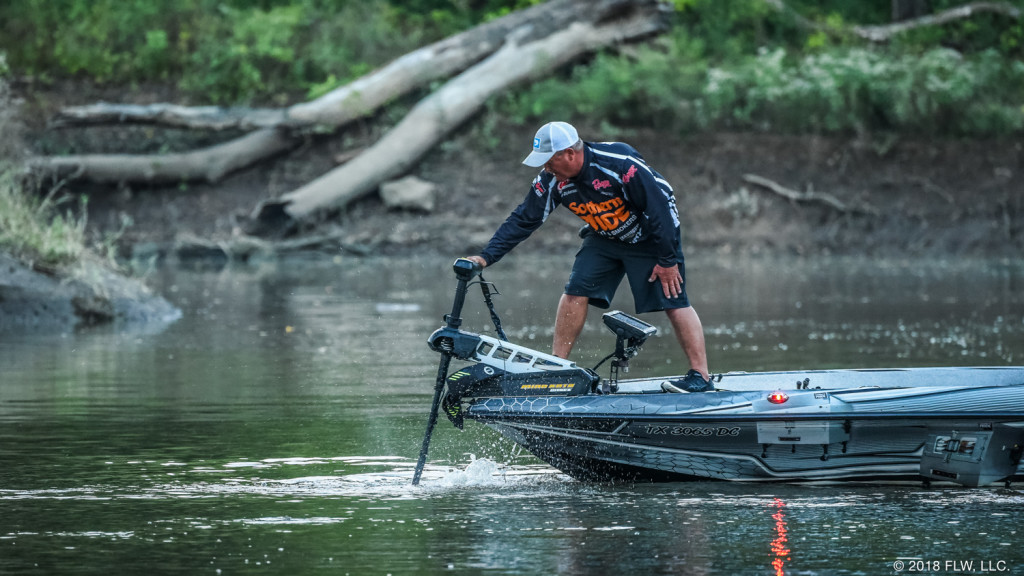 Things got a little crazy in the final-day action of the Costa FLW Series Southwestern Division event presented by Mercury on Fort Gibson. First, falling water levels overnight threw a major curveball to tournament leader Tommy Dickerson and third-place angler Cody Bird. For the last two days both pros have been shimmying their way through a rocky shoal far up a feeder creek. Yesterday, both said if the water dropped just 3 or 4 inches, the small crevice they’ve been following through the shoal would dry up and they would be denied access. When they awoke and checked water levels this morning, indeed the water had dropped.

Bird immediately made a decision not to even try to get in the creek and instead gambled on another backwater area. Meanwhile, Dickerson made the long run up into the secluded creek and spent more than 30 minutes trying to use his trolling motor to muscle his way through the 8-foot crevice in the shoal. After three or four attempts to get in, his boat became lodged and he had to concede his efforts, jump into the water and push his boat back out. By rule, Dickerson cannot get out and push his boat into an area. Once he became lodged, he got out of the boat and pushed his way back out and never gained access to the creek. He opted instead to run back out to the main river and fish for a few hours in hopes that the water would come back up enough to float into the creek later in the day.

When Dickerson ran up the river he was pleasantly surprised to find the current running pretty hard – something that had not happened during the first two days of competition. With that, Dickerson was hoping the running water might help him turn lemons into lemonade for the day.

The final weigh-in begins at 4 p.m. at the Wagoner, Okla., Walmart. You can watch it on FLW Live.