What worked during a tough fall derby in Oklahoma 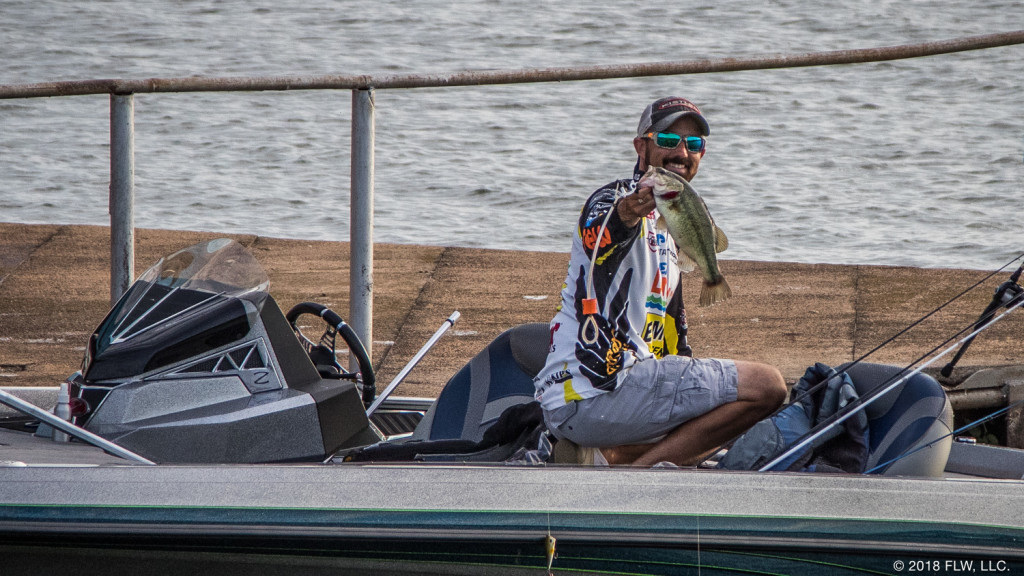 The Costa FLW Series Southwestern Division event presented by Mercury on Fort Gibson was one of the more challenging tournaments in recent memory. Consider that with 115 pros fishing over three days, there were only 13 limits caught, and it took just 18 pounds, 2 ounces for two days to make the top-10 cut.

Two well-known Fort Gibson locals, Tommy Biffle and Kyle Cortiana, both said the lake produced some of the toughest fishing they have seen in a long while.

Those who made the top 10 had to depart from the Fort Gibson norms. Tournament winner Tommy Dickerson chose to leave the lake’s main body and run far up into a small feeder creek way up the river. Others got creative with their casting angles or changed their normal routines to get bites. Here is a closer look at how they made it happen. 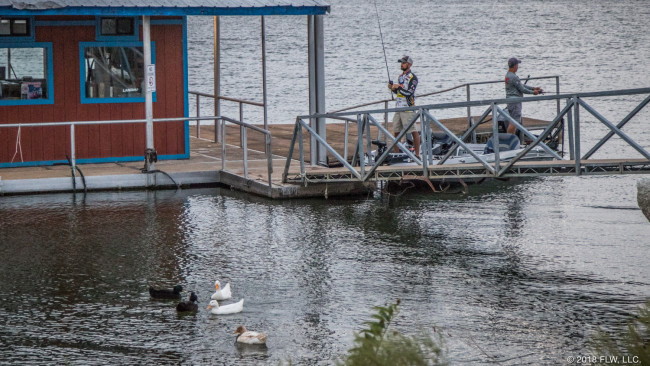 For local favorite Kyle Cortiana, an FLW Tour pro from Coweta, Okla., a tiebreaker became a heartbreaker at the final-day weigh-in when he finished runner-up. Both Cortiana and Tommy Dickerson ended up with identical weights after three days – 32-6 – but Dickerson prevailed because he was ranked higher than Cortiana going into day three. Dickerson started the day in first, and Cortiana in fourth.

Cortiana had a crafty pattern for fooling a school of lure-shy release fish that were hiding out under the marina docks at Taylor’s Ferry North. The rectangle of water behind the dock is surrounded on one side by the boat slips, on the ends by walkways and on the other long side by land. Cortiana figured out that the well-educated fish had hunkered down in the middle ground of the rectangle where they were not easily reachable by lures.

Determined to reach the protected school, Cortiana used a jig to make long casts over the walkways into the golden rectangle. At times he would even sling casts all the way through the metal framing of the boat slips and under the crossbars. His whole strategy was to worry about getting a bite first and then worry about getting the fish over the walkways to the boat.

On day one, everything went his way, and he landed nearly every fish that bit with the help of a couple of miracles. He took the early lead with 15 pounds, 8 ounces. His fish wised up on day two when he only caught three keepers, but Cortiana rebounded on the final day with a limit.

To fool the marina minders, Cortiana used a 5/16-ounce Bionic Jig (peanut butter and jelly) teamed with a Gene Larew Hammer Craw on 15-pound-test line. As the tournament progressed and the fish got tougher to catch, he had to go to a Gene Larew TattleTail Worm (junebug) on a 3/16-ounce shaky head on 8-pound-test line. 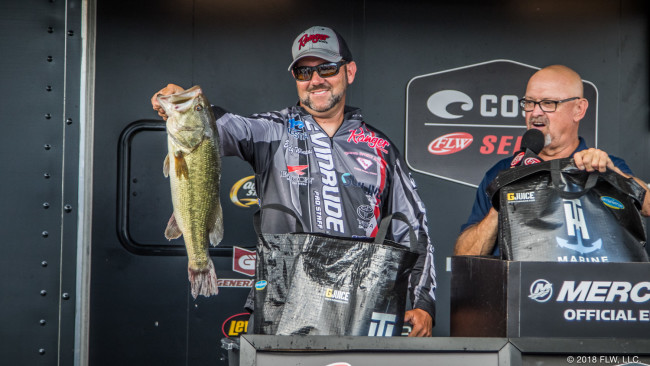 3. Winans cranks and buzzes for third

Brady Winans of Caddo Mills, Texas, says he had to “reinvent the wheel every day” on a challenging Fort Gibson to grab the third-place spot with 32 pounds even.

“Each day I fished somewhere completely different,” Winans says. “One day I fished a lot of flat main-lake stuff – mostly rock in 1 to 3 feet of water,” he says. “The next day I went way back in a creek and caught some. I was just fishing the conditions and what looked good to me.”

Whether he was running flats, points or the backs of creeks, his two lures of choice were a 6th Sense Crush 50X and a Movement 80X, both cranked on 16-pound-test Sunline.

Winans also bagged a couple of his bigger bass on a Big Bite Baits Tour Toad Buzzbait, which he fished up shallow in the mornings. 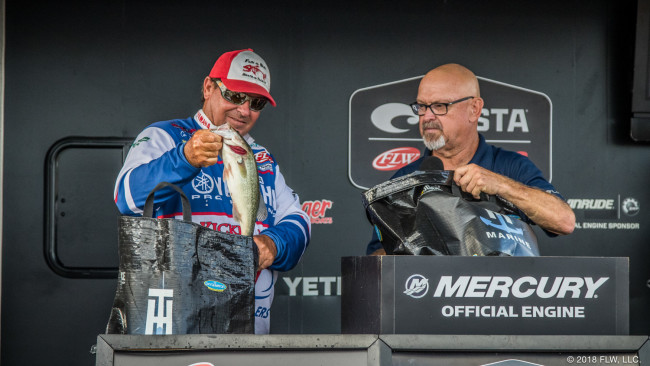 Cody Bird of Granbury, Texas, has a penchant for crawling his way into the back ends of creeks to find untapped fish, so it’s no surprise he found the same productive creek as tournament winner Tommy Dickerson. Bird shared the slender creek with Dickerson for the first two days, but when the water fell hard on the last day, Bird opted to not even waste time trying to access the creek and instead gambled on another creek.

“This has happened to me before here at Fort Gibson,” Bird says. “I find fish in a creek, and then water falls out on me and I can’t get back in. This time I had a backup plan to go to another creek I knew I could get into if the water fell out on me again.”

Bird’s backup creek was not as productive as the original one he shared with Dickerson, yielding him just four fish on the last day and leaving him in fourth place for the event.

No matter which creek he fished, Bird primarily stuck with a 6th Sense Crush 50X square-bill crankbait in chartreuse with a black back. He fished it on 15-pound-test line and targeted shallow rocks and wood. 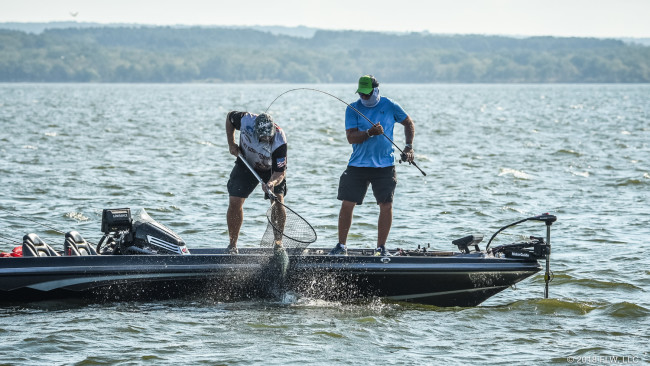 Professional fishing legend Tommy Biffle of Wagoner, Okla., never misses a chance to fish a derby on his home pond. During the week he used his namesake 7/16-ounce Gene Larew HardHead jig teamed with a Biffle Bug in Sooner run color to catch most of his fish. At times he also switched over to a soft-plastic stick bait on the HardHead to give the fish a little different look.

Biffle concentrated his efforts on rock, brush and logs on flats and points in 6 to 8 feet of water. Though Biffle says he has nearly 9,000 waypoints in his GPS, he was only able to hit 30 to 40 of those sweet spots per day. 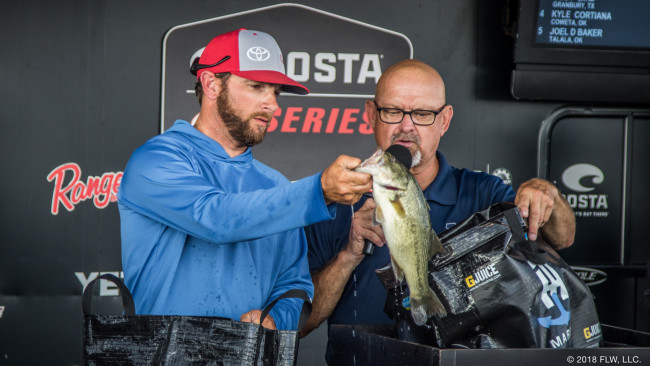 Mitchell Webb of Skiatook, Okla., put all of his tournament-winning hopes in one basket at Fort Gibson by trekking far back into a creek on the lake’s lower end.

Once in the creek, Webb stuck to one lure: a Strike King Rage Bug (black neon and black blue flake) with a 3/8-ounce weight on 25-pound-test Sunline. He pitched the bait to laydowns along the bank. 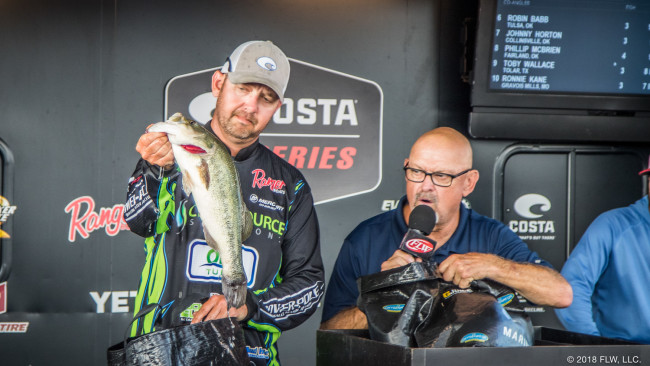 Though Mosley knows Fort Gibson extremely well, he found some new rock he had never seen before, which became a key player for him.

“They have been doing a lot of riprap repair on this lake recently, and I think I found a spot where some of their rock spilled off,” he says. “This one line of rock I discovered this week has never been there before. It’s new, and I was shocked to find it.”

To fool the rock-oriented fish, Mosley used a Texas-rigged Zoom Brush Hog in watermelon candy and a Missile Baits Tomahawk worm in plum. Both rigs were weighted with either 1/4- or 3/8-ounce weights and fished on 20-pound-test Seaguar.

“I normally throw a HardHead with a Bug on this lake,” Mosley says. “But this particular bunch of rock was so sticky, it was getting hung too much, so I had to go to Texas rigs to keep them from hanging up.” 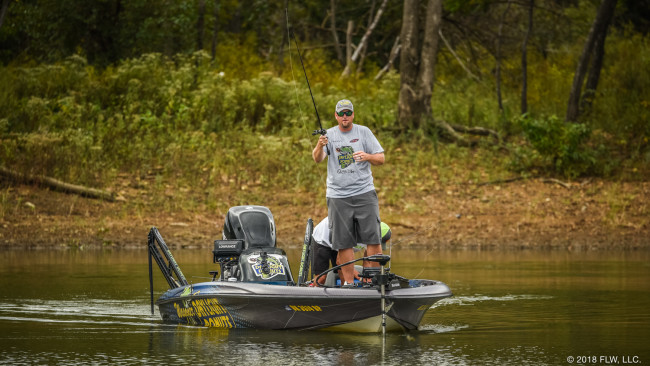 Local favorite Ryan Wilbanks of Wagoner, Okla., knows a thing or two about Fort Gibson. As a kid, he swam and fished in the lake every day during the summers. Over the years Wilbanks used his feet to find a number of key fishing spots along Fort Gibson’s shoreline.

“Whenever we would wade and swim I would find big boulders or rock-on-rock high spots out there in the water, and I marked them,” Wilbanks says. “Most of them are shallow – in 1 to 3 feet of water – and they have turned out to be pretty good fishing spots over the years.”

Wilbanks knows hundreds of such spots in Fort Gibson, but he says the key to his week was fishing slowly on just a few key spots instead of running a bunch of spots really fast. He found the more he needled his rocky structures, the more bites he could get.

“They’re sitting there, but they’re really good at ignoring lures,” he says of the bass. “So I just kept casting and casting, pestering them into biting. Sometimes I had to change angles to trigger a bite. And if I could just get a couple of nonkeepers to start biting I would weed through those until I finally caught a keeper.” 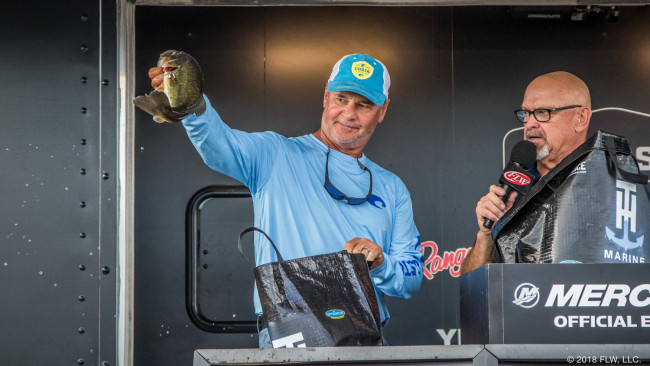 9. Baker mixes and matches for ninth

Joel Baker of Talala, Okla., ran a variety of water at Fort Gibson to finish in ninth place with 23-5. 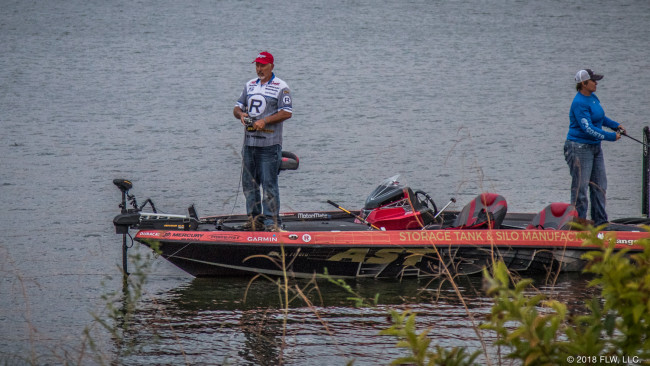 If there is a large bass tournament in Oklahoma, you can bet FLW Tour veteran Darrel Robertson will be there to get his check. Indeed, he claimed the last spot in the top 10 at Fort Gibson by fishing a Yamamoto Senko on a 1/8-ounce Gamakatsu Wacky Head jig around docks and marinas.