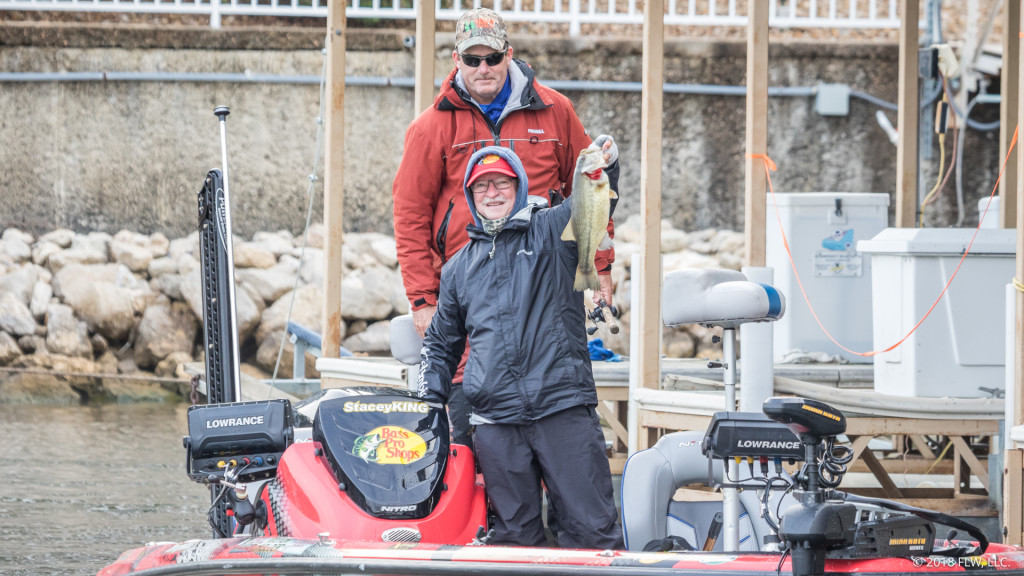 The final day of the Costa FLW Series Central Division event on Lake of the Ozarks, which is presented by Evinrude, started off with a pile of local hammers all within striking distance of a win. Though, fishing pressure from last week’s Lake of the Ozarks Fall Big Bass Bash tournament featuring over 1,000 anglers and this week’s Costa with another 160-plus boats may finally have taken its toll.

Adding to the fishing pressure is the clouds and wind today, along with the abundance of boat traffic this lake is known for despite the cool conditions.

Stacey King started the day in the lead, and though he was confident in the pattern he’s running, so far he’s got just three fish for about 6 pounds in the boat when we left him late morning.

Second place pro David Ryan ran all the way up the Osage River where he’s been catching his fish, but after no luck found himself back in the lake trying to box a keeper.

James Watson has been fishing a jig on docks close to takeoff and has about 7 pounds in the boat.

The highlight for the day so far is Jeremy Lawyer, who has a limit for close to 13 pounds. While that doesn’t make him a shoo-in to win, it does prove he dialed in on the right pattern for the day.

The rest of the top 10 weren’t having the best luck when we checked on them either. Garrett Paquette had two fish, Arnold Payne Jr., had no fish and says his brush piles must have dried up. Austin Brown has three fish, catching them on a Whopper Plopper off points, while Jason Vance has about 6 pounds.

Finally, Dennis Berhorst and Shawn Kowal didn’t have a fish in the livewell when we checked on them this morning, but with their experience on this body of water you can bet they will piece together something.

There’s still time for anyone in the top 10 to string together a solid limit and that will likely be the deciding factor in who takes home the top prize. Tune in to the live weigh-in at 3 p.m. CT to see who will be crowned champion in the Ozarks.