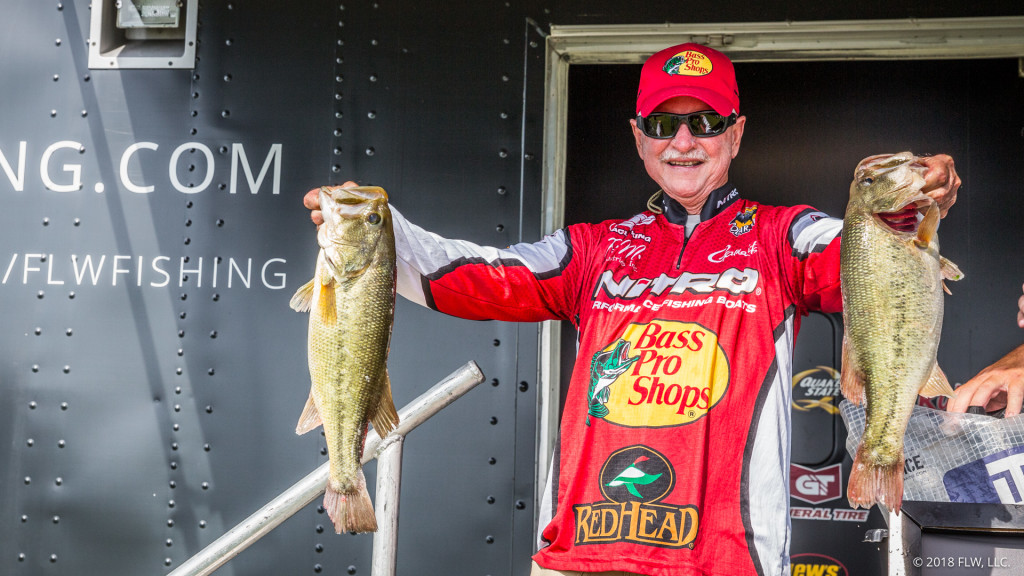 A close-to-home schedule is both the reason why 69-year-old pro Stacey King chose to fish the Costa FLW Series Central Division, and a big part of why he was able to sew up the division’s Strike King Angler of the Year title.

With two events in the Ozarks, including the opener on his home lake, Table Rock, the Reeds Spring, Mo., pro found himself in familiar waters most of the season. From there, his success was just a matter of executing at a high level like King has done throughout a tournament career that’s lasted about five decades.

King is a legend in the tournament bass fishing world. He fished his first tournament in 1969 and started competing at the pro level in the 1980s. Now, he’s a Hall-of-Famer, a four-time Forrest Wood Cup qualifier, a bass fishing millionaire, a 12-time Bassmaster Classic qualifier and a longtime member of the Bass Pro Shops pro-staff.

Throughout the course of his career, King has traveled the country far and wide in pursuit of bass. He overcame cancer and rode the waves of the ever-changing landscape of the pro bass scene, up until he retired from full-time competition at the end of the 2015 FLW Tour season.

Now, he’s competing for the love of the sport, and at a much easier pace.

“I just fished two Southwestern Division events and the Central Costas this year,” King says. “My wife and I did it full time for 30 years, and we kind of got burned out on the travel. As long as I don’t have to drive more than a day’s drive to get to a tournament, I’ll do it. I still love to compete and love to fish. I still want to do it, but I don’t want to do the coast-to-coast thing. I’ll be 70 next February.”

In addition to fishing tournaments when he wants, King says he spends a lot of time in the woods and fields of Missouri and Kansas. That’s how he’ll spend his offseason, outside of competing at the Costa FLW Series Championship Nov. 1-3 at Lake Guntersville. He’s been chasing turkeys this fall and has plans to get after deer with his crossbow. And he still does a lot of bird hunting – bobwhite quail mostly – with a string of five English pointers.

The pace he keeps might be the secret to his fountain of youth, but whatever it is, King’s thrilled to be living an outdoor lifestyle and showing his younger competitors that he’s still got it by winning AOY.

“It feels great. I just had a good season,” he says. “I’m very fortunate. Everything went right for me. I’m just sure lucky to be in that position to win.”

From Table Rock to Lake Barkley and back to Lake of the Ozarks, King spent most of the season in familiar territory, resulting in three top-10 finishes and an AOY finish that landed him ahead of such hammers as Jeremy Lawyer, Andy Morgan, Todd Castledine and Greg Bohannan.

King was literally right at home in the April opener.

“Table Rock is my home lake, so I’m very familiar with it. That time of the year there’s a pretty good swimbait bite. I caught most of my fish in that event on swimbaits,” says King, who hucked Bass Pro Shops Speed Shad swimbaits.

“The fish were prespawn, getting ready to move onto the flats. Some were still on steeper points just moving up and getting ready. Most of those fish I caught were not too deep. I might’ve caught some at 10 feet and some shallower than that. I caught them around baitfish.”

Tougher conditions on the final day challenged King, and all he could muster was five meager keepers. He finished fourth and less than 2 pounds behind winner Hensley Powell. It was the only time all season that he didn’t lead the AOY standings.

Though the second Central Division contest was based on Lake Barkley, King made the same decision that many competitors did and focused on Kentucky Lake, which is connected to Barkley by a canal. A 20-pound, 2-ounce limit on day one landed King in 10th. He stayed in that spot with 16-15 on day two. Two keepers for 4-9 on the final day did nothing to help his cause. King finished 10th and more than 30 pounds behind winner Jake Lawrence.

He spent his tournament on two 10- to 15-foot-deep main-lake ledges where King figures the fish set up temporarily on their way from spawning bays to the deeper ledges of the main lake.

“There really weren’t that many fish on either one of those spots,” King says. “One spot had some pressure form another boat. The other spot I had all to myself. That’s where I caught my big stringer the first day and most of my fish the second day.

“I think that was a small spot, and I really don’t think there were many fish moving in to feed. I think they moved on that spot to feed at night because I caught my fish early in the morning. I think I wore them out because I couldn’t catch them the third day.”

Once again, King came within shouting distance of a win, finishing exactly 3 pounds behind tournament winner Jeremy Lawyer at Lake of the Ozarks.

“I practiced up the Osage River, and I had a few areas with docks where I felt like I could catch some,” King recalls. “A couple mornings in practice I had started fairly close and had two or three topwater bites with a couple fairly good fish. My mindset was to start close and see if I could get a bite or two and then go up the river and fish.”

The first morning, King lit into a trio of quality keepers right away with his topwater, and the plan quickly changed. He opened with 11 pounds, 13 ounces, but it could’ve been 15 to 16 pounds had he not lost a good one at the net.

“That made up my mind that I would do the same thing the next day,” says King, who was in 58th after day one.

Day two is when the AOY race more or less finalized.

“I got a perfect day for towpater fishing,” King says. “It was cloudy, rainy, cold and a little windy; just a miserable day, but with low pressure. That’s the kind of day they like to feed up there. The first bass I caught that morning was a 6-13. I had my game plan set for that day and stuck with it and had that big stringer”

A 23-pound, 2-ounce sack shuttled King all the way into first place, though he was tied for weight with Missouri’s David Ryan.

It was a remarkable turnaround, but the excitement was short-lived. King caught only three keepers for 8-4 on day three and slipped to fourth place.

“The sky was still cloudy on the third day, and I really felt like I could catch them again on that topwater. Apparently the pressure came up, and they would not bite. I got one small fish to come up and bite a topwater that day, and it was a small one; I mean, a 12-incher.”

Scrambling, King went to some docks and at least gave himself an opportunity. It just wasn’t meant to be.

“I did catch a few fish each day pitching a green pumpkin Zoom Trick Worm around boat docks,” he says. “I resorted back to that and scratched out three pretty nice fish. If I had caught the other two I could’ve won the tournament.”