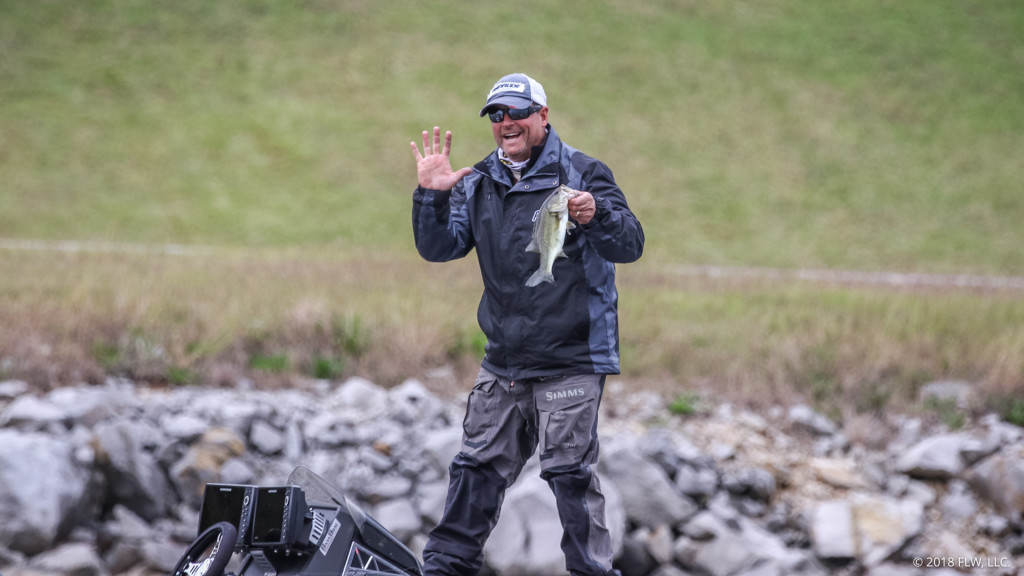 Jocumson added a 2 1/2 – pounder to bring his total weight up to around 14 pounds. Jeremy Lawyer has around 12-13 pounds total. Antonio Soto and his co-angler each have two fish in the boat.

In all, fishing has truly been a grind on Lake Guntersville. The cold front and fishing pressure are likely the two biggest factors working against the entire field. Still, there are some major hammers unaccounted for so we should see some big bags cross the stage at Guntersville City Harbor. Make sure to watch it all go down live on flwfishing.com at 3 p.m. CT.

Mike Blake has a limit with a good kicker. Ohio pro Jim Vitaro has three in the box, one of which being a 4-pounder. Darryl Esterly only has two keepers but he is fishing in an area where bass are busting all around him.

It has certainly been slow on Lake Guntersville today but a positive thing is that we’re seeing some quality fish caught. If an angler brings up a limit with a few good kickers, they should be in solid position heading into tomorrow. 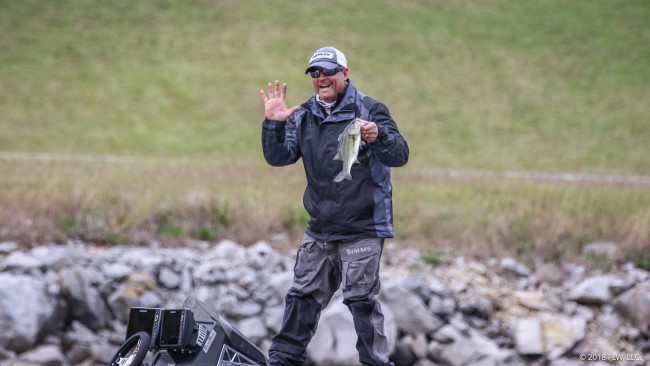 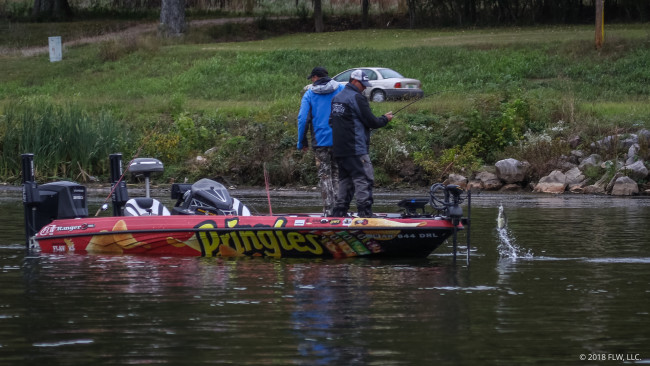 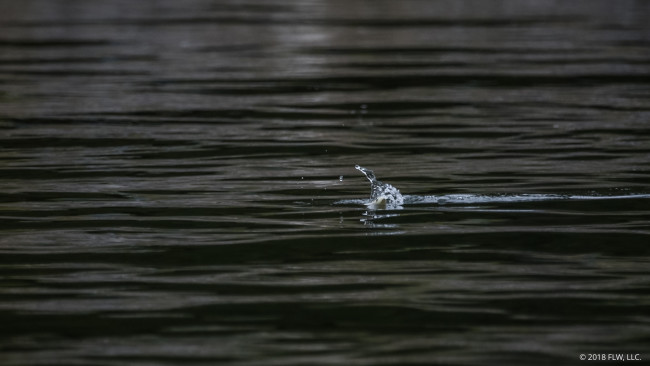 Greg Bohannan has four keepers in the box for roughly 8 pounds. Unlike most anglers we’ve seen, Bohannan is targeting schooling fish. When we saw him he was throwing a blade.

Austin Felix has zero fish to show for his efforts today. He did say on his day off he was able to binge watch a few Rambo movies. Maybe the Minnesota pro can find a way to harness his inner Sylvester Stallone and power through now that the odds are stacked against him.

12:35 p.m. Update – Bohannan just caught his fifth fish to fill out his limit. That is the first limit we have heard of today.

We just saw J Todd Tucker using an umbrella rig along a bank with docks. He says he has one good one and one little bitty one.

The fishing pressure seems to be taking its toll on the Lake. Back in South Sauty there are boats scattered everywhere doing all different stuff and not catching much. Whoever finds water that hasn’t been pounded may be able to get themselves a good sack. It’s also raining a little on various parts of the lake. 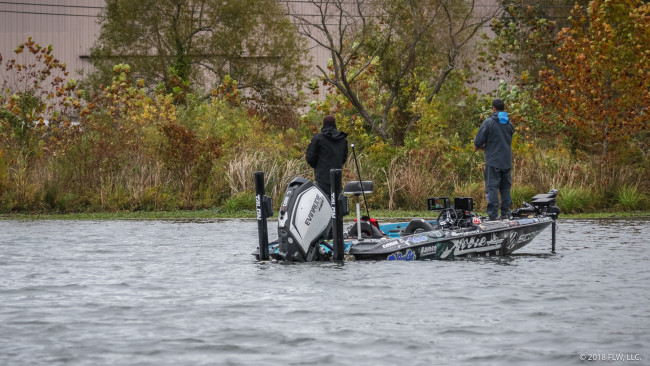 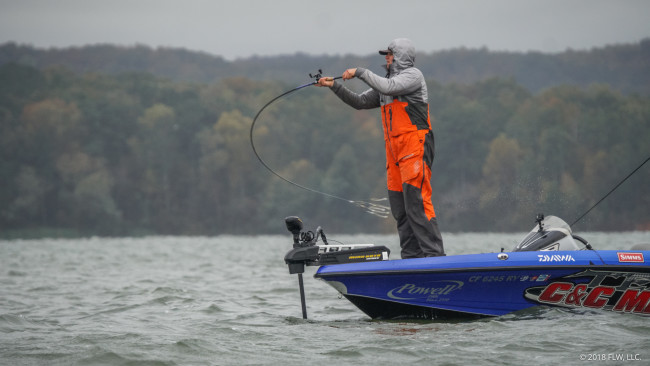 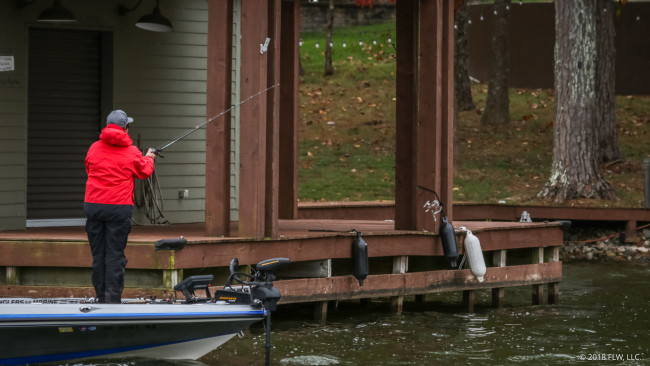 Andrew Loberg is now up to about 7 pounds after landing another good one near Pine Island. Jordan Collom has two keepers in the boat. He’s been slinging an a-rig at docks around the same area as Loberg. Bryan new has three in the boat – one being decent. Carl Jocumsen and his co-angler each have three fish for about 12 pounds.

It’s a good sign that we’re at least seeing fish being caught more consistently within the last hour. The weather is up to about 51 degrees and shouldn’t get much warmer. It’s almost guaranteed that some anglers will be filling their limits soon.

Oklahoma pro Andrew Upshaw has found himself one decent keeper. He was fishing a shallow flat at the mouth of a creek when we saw him. Further down the lake we stumbled on Andrew Loberg, who has a solid 3-pounder in the boat. We also have reports that boater Kent Ware and his co-angler Ashley Rae each have two keepers in the box. Before we could get a look at the fish they decided to run up river to hit another spot.

Carl Limbrick came through and landed the first confirmed keeper of the day. Limbrick's fish came on a good old wacky rig. Right after we rolled up on Clint Brown who was working some docks with a vibrating jig. He says he has a 3 1/2-pounder in his livewell and his co-angler has a 7-pounder. 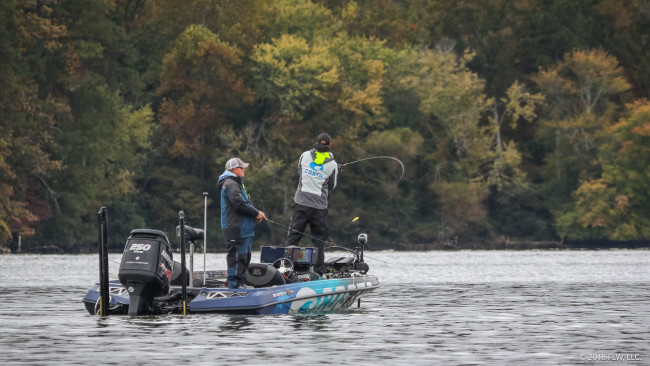 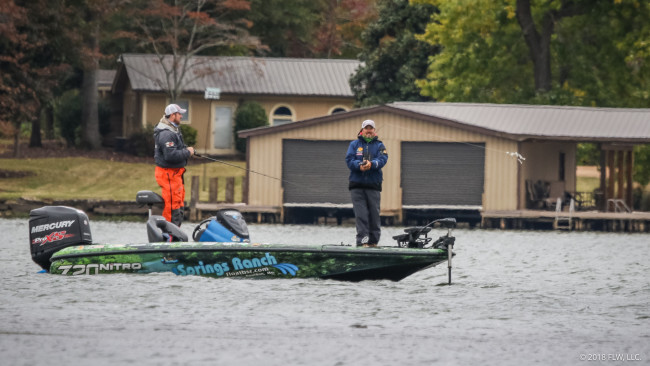 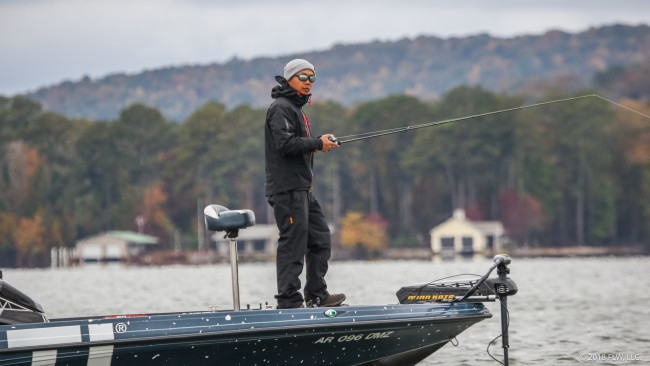 A lot of guys are still sitting on a goose egg as far as keeper fish go. In fact, we’ve yet to see a boater catch a keeper. However, with a field of nearly 200 boats someone is guaranteed to have found some good fish.

As far as patterns go, we are seeing a majority of anglers fishing moving baits like ChatterBaits, swimbaits, spinnerbaits, crankbaits and buzzbaits near grass. It seems like everyone’s looking for a reaction bite.

Up the lake Brad Cook seems to have found a promising area. He’s fishing a giant-pad field where fish are blowing up all around him. The bad news is that he hasn’t quite figured out how to catch keepers from the area yet. 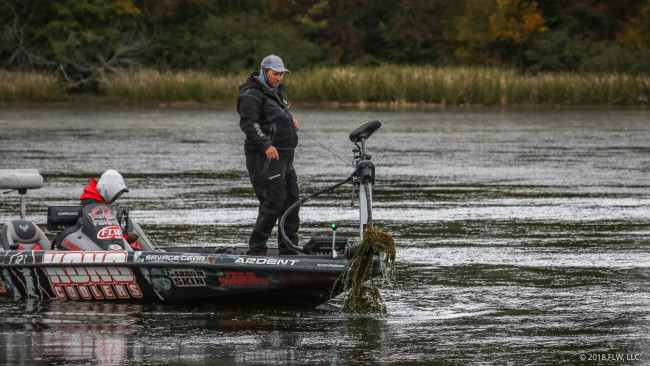 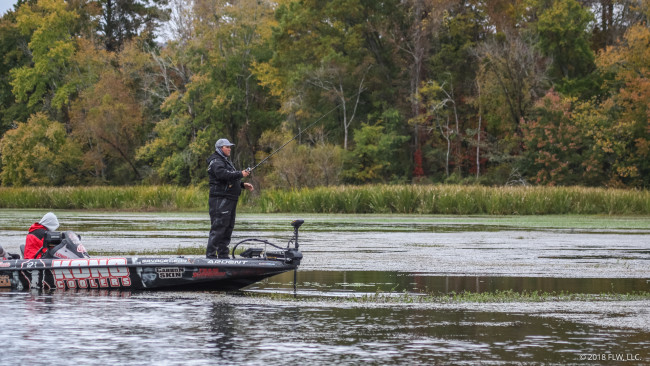 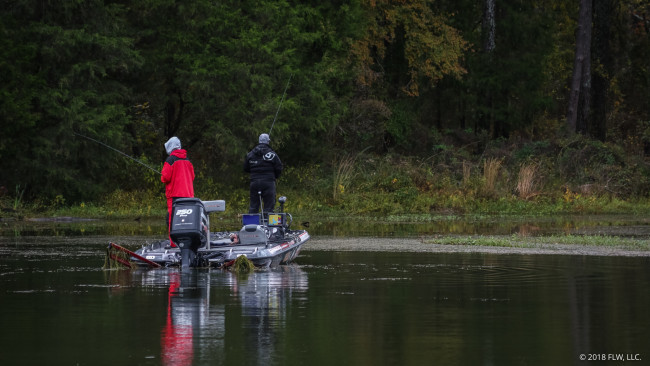 Clayton Batts is pushing up super shallow on some matted vegetation. He says that a lot of the matts he wanted to target from practice have moved. He doesn't have any fish to show but his co-angler has boxed one. The wind and rain from yesterday’s storm certainly has had its effect on the Lake.

Overall, the cold front that came sweeping through the region has seemed to make everyone slow down. A lot of the anglers we see are using an extremely methodical approach to the areas they’re fishing. 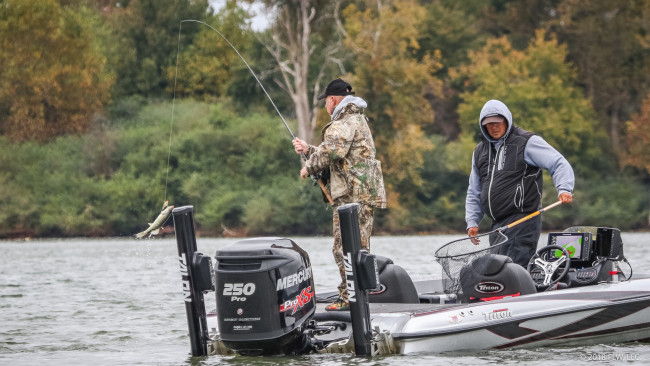 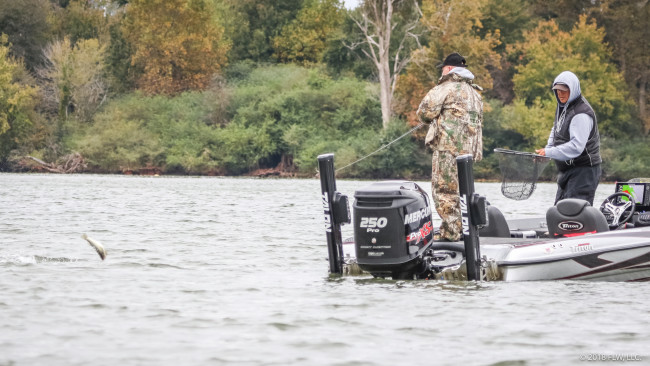 We are actually starting to see some fish being caught. The problem is that they are all too small to keep. It seems like a lot of the small ones are being caught in and around grass.

The fishing pressure is unreal on Lake Guntersville at the moment. With so many boats on the lake it is almost difficult to effectively find a lot of the FLW anglers. The good news is that we saw and angler from another derby land a nice smallmouth. So maybe the bite is about to pick up. 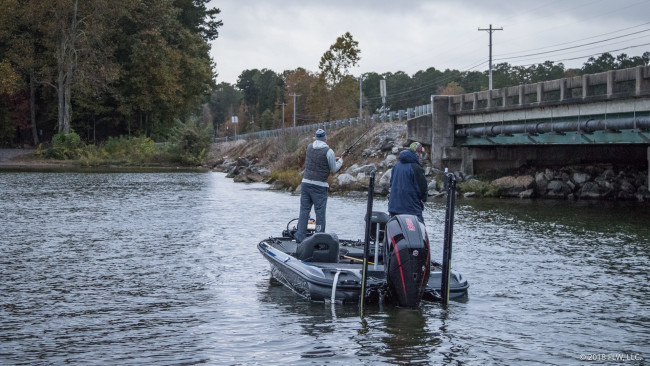 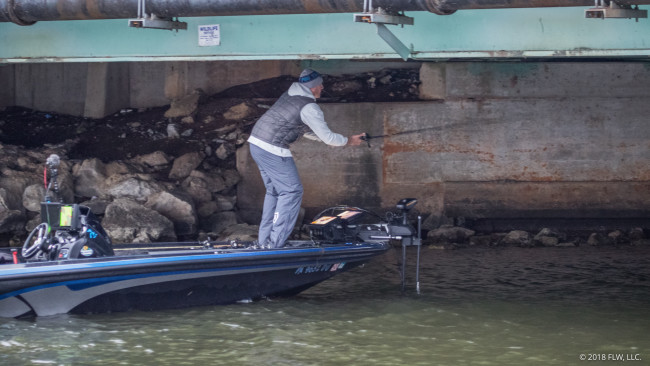 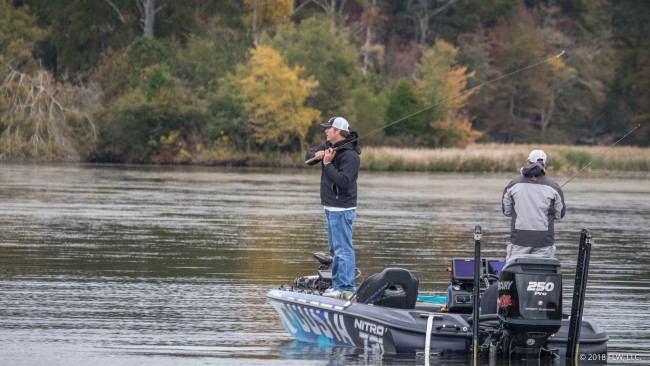 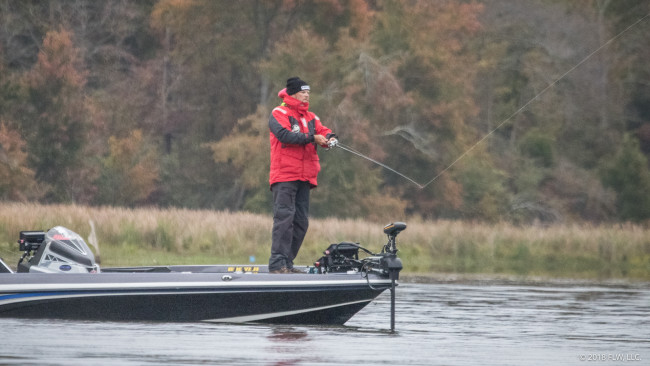 We rolled up on Dylan Hays and Chris Jones sharing a grassy hump with a bunch of other anglers. From what we see, spinnerbaits and swimbaits are in the mix. Hays and Jones said they haven’t caught anything yet. However, as we were watching, Hays did manage to catch one non-keeper.

Elsewhere Troy Gibson is slinging an A-rig around. He said he the only action he has had was one that he missed. 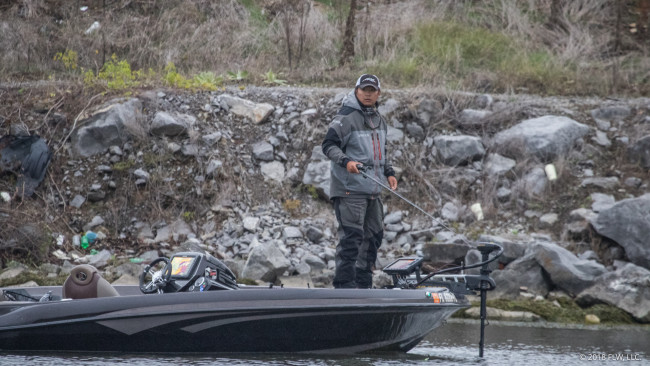 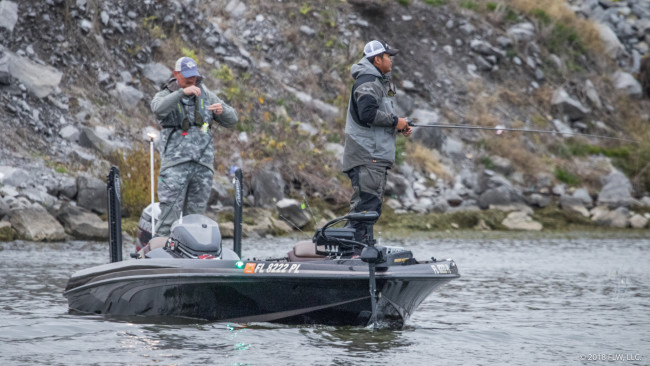 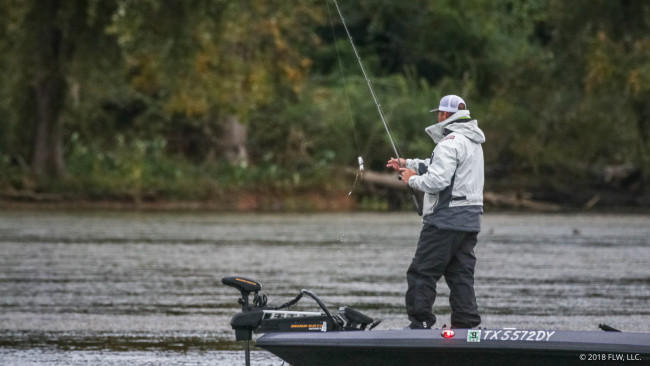 The first wad of boats we found was located in the main lake near South Sauty. Further up the lake near Goose Ponds the FLW anglers are finding some competition from other derbies. It will be interesting to see how far the FLW competitors push up the lake with other derbies being held.

As far as fish catches go, there has not been much. The only fish we've seen caught was from the co-angler of one of the FLW China qualifiers. Down in Alred’s, we found Jason Bonds frogging some grassy areas with no fish to show. 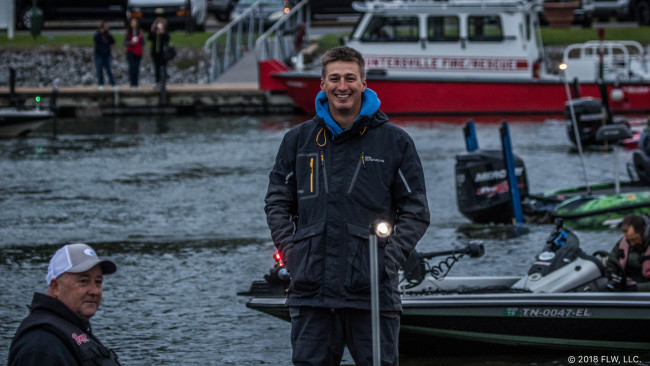 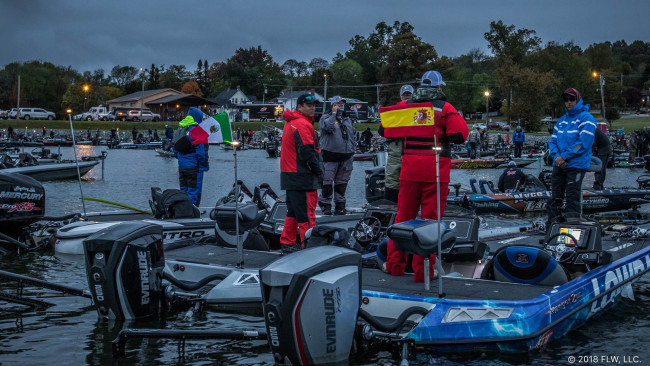 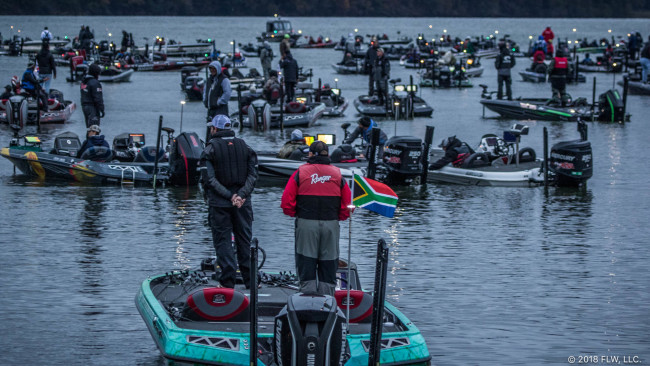 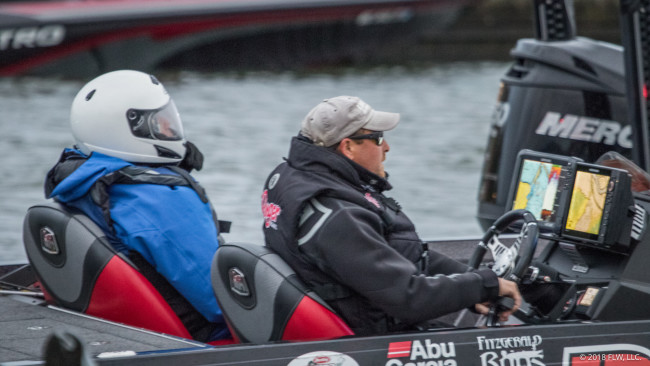 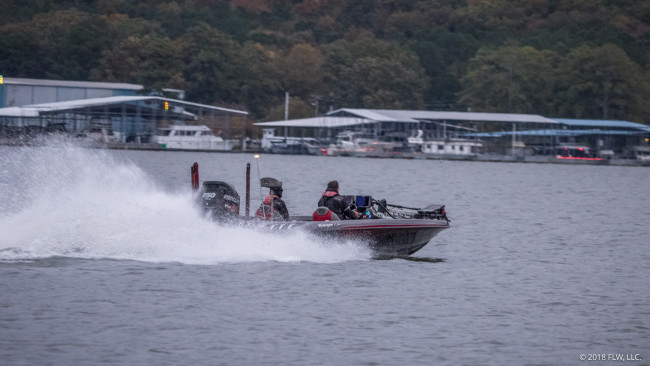 With day one of the Costa FLW Series Championship on Lake Guntersville canceled due to wind and storms, everyone is now fishing a two-day shootout. Considering the full field of pros and co-anglers fishing both Friday and Saturday there should be drama throughout.

A big front with heavy rain in places and some severe storms rolled through on Thursday, but the weather should be pretty good for Friday and Saturday. Both days will be chilly to start, with cloudy conditions on day one and clear conditions on day two. The anglers have now been off the water for two days running, so it will be interesting to see what holds up from practice and what may have changed.

The vibe from practice is that Guntersville is fishing pretty tough, which is not altogether unexpected. With heavy pressure from a number of other tournaments, weights are likely to be a little lower than one would expect on Guntersville. However, that doesn’t mean the fishing will be bad, or that we won’t see some individual big ones, it’s just more likely that consistently catching 15 to 18 pounds will be good than consistently crossing the 20-pound mark. Now that it's only a two-day tournament, one really strong day could go a very long way.

Expected techniques run the gamut from frogging and flipping to umbrella rigs and topwaters. Guntersville in the fall offers a lot of diversity, as there are still some fish offshore, fish on the bridges, fish schooling and fish relating directly to grass. At this point, we really need to just see what’s going on. Fall on Guntersville offers a lot of diversity, and with anglers from all over the country and the globe looking to cash in, you can expect to see plenty of different approaches.