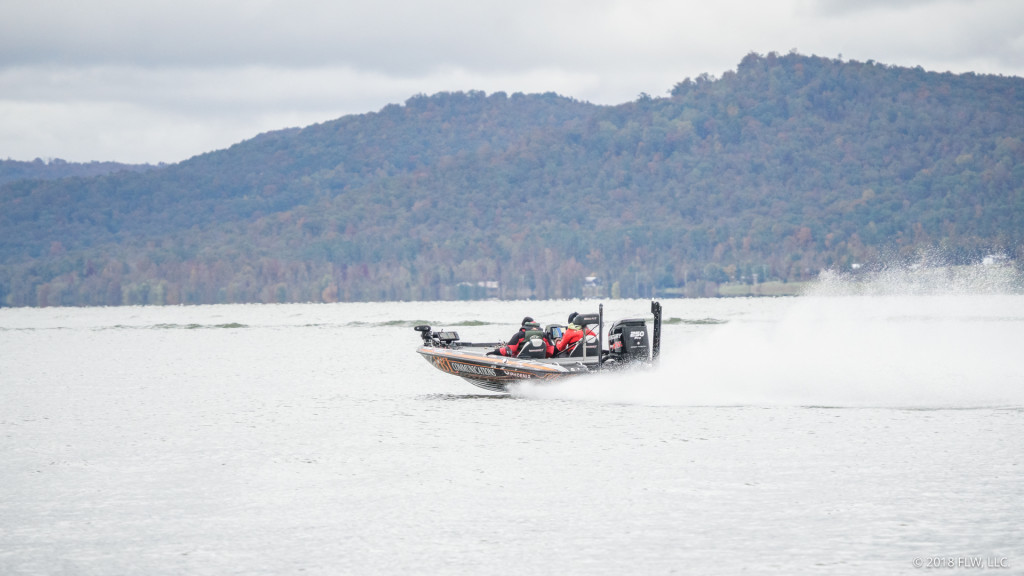 The highlight of Friday’s first day of competition (though technically day two) at the Costa FLW Series Championship on Lake Guntersville was Carl Jocumsen’s 20-plus-pound bag that he caught on a glide bait. It’s pretty rare that someone uses the big glide to hammer them on an Eastern fishery in a major 200-boat tournament in the fall. But Jocumsen saw an open window of opportunity and leapt through it.

Behind him (but not too far back) in the standings is a squad of guys relying on various Guntersville staples such as frogging, flipping and fishing offshore structure. They’re all hoping that a forecast change in conditions, from overcast to sunny, might stall Jocumsen’s mojo and open the door for a come-from-behind win on Saturday.

The entire field will fish Saturday to settle the championship due to the cancellation of day one.

Here’s how the rest of the top five caught hawgs on Friday. 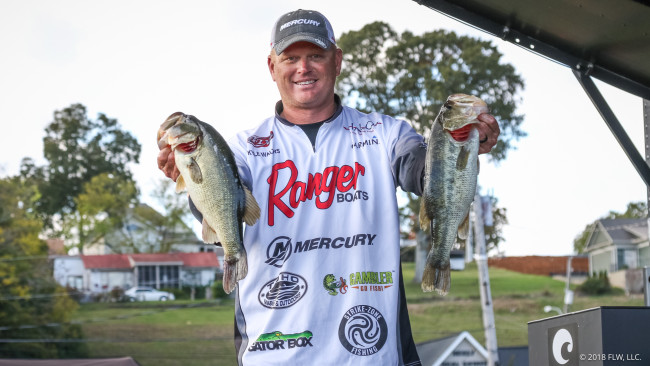 Kyle Walters has been here before. Literally, he’s been in contention to win a multiple-day tournament on Lake Guntersville in the fall. The first time was in October 2013 at a T-H Marine FLW BFL Regional, which he won. Now, he’s 3 ounces back going into the final day of the Costa FLW Series Championship after weighing a limit of 19 pounds, 15 ounces today.

Action for the Florida pro started off a little slow this morning due to chilly weather and overcast skies, but relocating to a second key area was all it took to get things started. From there, he says he caught them “one here, one there” the rest of the day.

“I’m fishing miles,” he says of his best area. “I got the right bites today. I had probably 10 keepers.”

Among the “right bites” was a 5-pound kicker Walters caught toward the end of the day. It was his last keeper.

Walters threw primarily slow-moving baits. Within his larger area, he dialed in on one key stretch that seemed to out-produce the rest. He’ll key on that spot again tomorrow and hopes to take advantage of the sunny skies in the forecast.

“I’m hoping the weather change and the sunshine tomorrow will bring new fish in,” Walters adds. 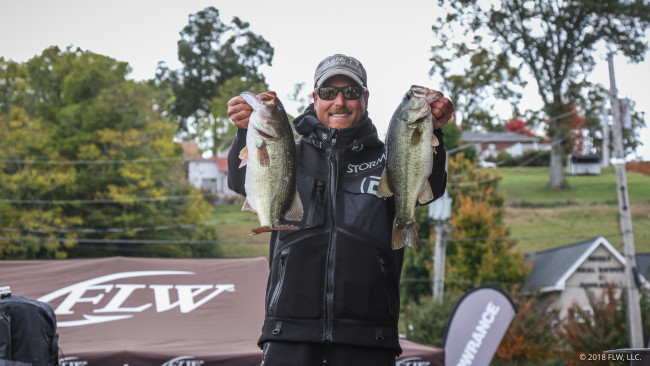 What’s a top five without Bryan Thrift in it? As usual, the North Carolina pro reported tough fishing prior to the derby. Then he came out swinging the way the best bass angler on the planet should, with 18 pounds, 3 ounces of bass.

“Weight-wise it was a lot better than I expected,” says Thrift. “I was just fishing for bites. I got two of the right bites today.”

Thrift says he covered quite a bit of ground to get his limit, but he wasn’t in full-on, fly-all-over-the-lake Bryan Thrift mode.

“It seems like the fish are in a few areas,” he says. “I’ve got several areas with fish. Catching them is another story.”

“They’re there. You’ve just got to make them bite,” he adds.

Thrift believes the day’s dreary weather helped his cause. Tomorrow, he’ll try to keep it rolling on a couple of key areas, because he claims that’s all he has to rely on. 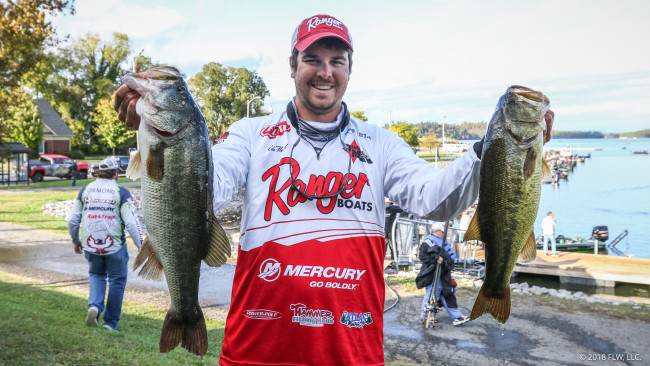 Though Cole Floyd claims Leesburg, Ohio, as his home city, the Bethel University hammer actually lives in west Tennessee these days and frequents Kentucky Lake. All that time on the Kentucky Lake, along with some summers spent on Guntersville, have helped him develop into one of the Tennessee Valley’s rising stars.

Today, Floyd proved his mettle on the famous river system by cracking 18 pounds, 2 ounces on a Guntersville favorite: a frog.

“I started off hitting some deep grass throwing a trap and caught a little one. Then I jumped around,” he says. “I went to a place I got some bites in practice and caught all my fish on a frog.”

Floyd had company from only one other angler, who’s fishing another local derby. He also saw quite a bit of action. He and his co-angler both missed several fish. He’s confident there are plenty of bass to last another day.

“I left it [his best area] because I had some other stuff I got bit in during practice, but all that grass got blown away,” he adds. “I should be able to get to it and fish it like I did today.”

Floyd landed eight keepers today. He has another area farther upriver he can fall back on if needed. 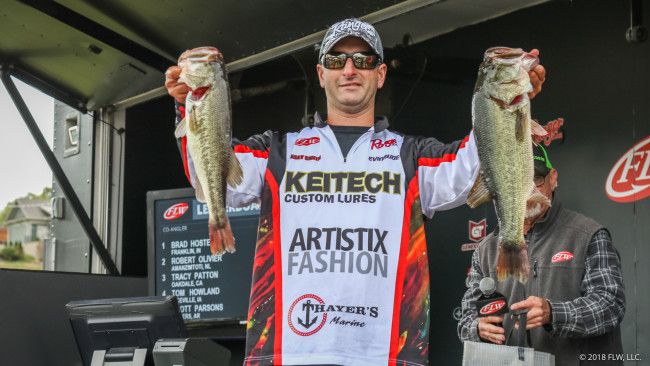 This is New Yorker Casey Smith’s first trip to Guntersville, and he’s making the most of it. After an up-and-down practice, he put together a 17-pound, 8-ounce opening imit.

“I’m in one area, and I’m just bouncing around doing a variety of things,” he says. “I caught that [limit] really early this morning. I thought I had a nice base and I could upgrade, but I didn’t catch anything else. I did lose one. I think I had five or six bites.”

Smith says there’s a good wad of fish in his area, and they’re fresh arrivals.