The sun is out, but it doesn’t seem to be firing up the fish 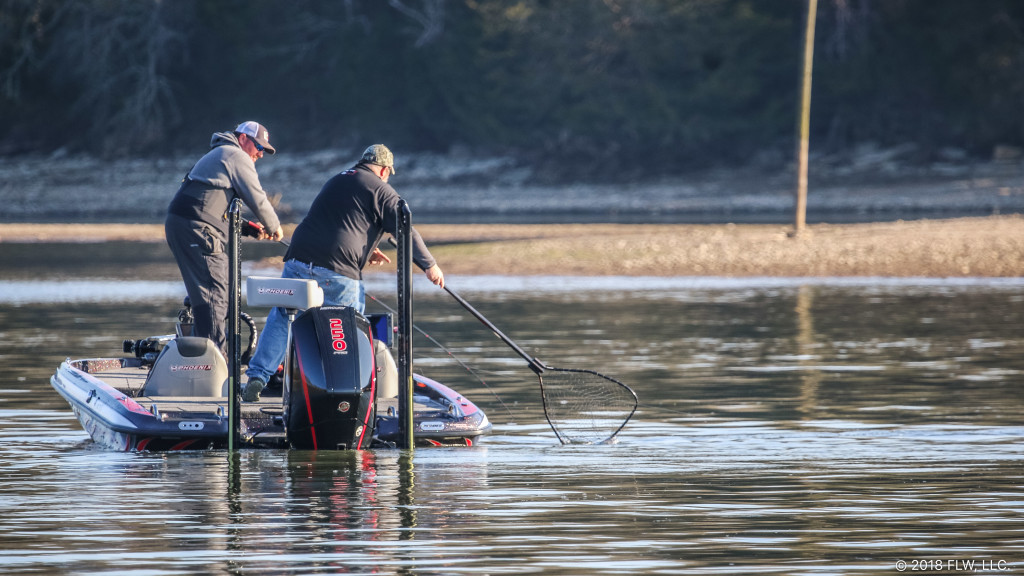 Despite improving weather conditions – including abundant sunshine and rising air temperature – the fishing seems to be as slow on Chickamauga today as it was on day one of the Costa FLW Series Southeastern Division event presented by T-H Marine.

Rising water seems to be the most likely culprit. After a week of low water levels and ripping current, the water continues to rise (a foot or more yesterday and marginally more today). The current is still pretty fast on the main river, but fish simply seem to be repositioning and moving into different areas than anglers were catching them during practice.

Wayne Frierson is off to as good a start as anyone we saw on the water this morning with only four fish for 8 pounds. Granted, we haven’t touched base with all 193 boats, so there’s a good chance someone, somewhere is catching them.

FLW Tour pro Jason Abram had a couple good ones before 9 o’clock this morning and could have the start to a decent bag by this point. He caught two keepers for about 5 pounds and was throwing around an umbrella rig.

Jerry Angel was one of several boats in Sale Creek today. He was also throwing around an Alabama rig and had three in the box. “It’s better than yesterday,” he said of his 4-12 bag on day one.

Locating fish doesn’t seem to be the big problem today. It’s getting them to bite.

“We got them stacked up here,” Wayne Cook said when we pulled up on him fishing a long point at the mouth of a creek. “Just can’t get them to bite.” His co-angler, Jon Huffine, had “one decent one” in the box, but that was about it for their livewell.

The umbrella rig continues to be a popular option across the tournament field today. At least half the anglers we’ve checked in with have been throwing one around. Surprisingly, though, there have been a lot of really small fish caught on them, and they don’t help much with the 15-inch size limit on Chick largemouth.

Just recently we found out that Bryan Thrift, who had 16-4 yesterday, has a limit for about 18 or 19 pounds. That might not be enough for a top-10 cut, but there’s plenty of time left to fish and the best bass angler on the planet will make the most of it.

Elsewhere on the lake, Kevin Miller, Brian Elder, Kyle Austin and Gary Yamamoto all had zero fish when we checked in on them. That doesn’t mean they won’t bring any fish to the weigh-in stage, but it does mean slow starts bit them this morning.

Yesterday’s leader, Rusty White, had 28 pounds, 11 ounces to lead the field entering today. Because it’s Chickamauga, there are good odds that someone will catch them as good or better today. So, you’re still going to want to watch weigh-in at 3 p.m. ET.